4 Tips for Choosing Your Squat Attempts On Meet Day

The ability to accurately and effectively plan and execute your attempts on meet day is as much of a skill as the squat itself. If you don’t arrive on meet day with a plan, then you have already placed yourself in a disadvantageous position in terms of putting up your biggest total possible. In the following article, I will lay out four tips that will help you make the most out of your pre-meet planning, attempt selection, as well as put you in the best position possible to achieve a PR total. Enjoy.

1. Attempt Selection Starts in Training, NOT on Meet Day

Any successful meet begins with a well thought out training cycle, which includes the planning of your attempt selection weeks beforehand. A typical training cycle will consist of 1-2 hypertrophy blocks, 2-3 general strength blocks, and 1-2 peaking blocks (duration and composition depends upon the athlete’s individual differences, experience, and level).

Generally, I’ll start discussing attempt selection (mainly openers) 8-10 weeks in advance of the meet, which typically falls on week 2 or 3 of the first general strength block. Although nothing is set in stone by this point in the training cycle, so it’s still important to map out an action plan and organize future training blocks (especially the peak) according to projected numbers, as well as the athlete’s/coach’s goals.

Often times, athlete’s will fall into the trap of having a particular day for “testing openers” 7-14 days before the meet instead of having a plan far in advance. Although this may seem like a good idea, the reality is that fatigue is so high before tapering into a meet that you are unable to get an accurate gauge of your current strength levels. This is highly apparent with both the squat and deadlift, since their recovery curves are so much longer in comparison to the bench press.

It’s important to map out appropriate openers in advance, then use a day (typically 7-10 days out from competition, depending upon the lifter) to dial in openers, NOT test them. This is done by performing all three lifts on a given day, followed by back down sets of a “last warm-up” that you’d use on meet day. This allows the athlete to still keep the volume moderate heading into the meet so they don’t peak “too early”, as well it takes the guesswork out of meet day warm-ups and attempt selection. A typical “openers day” as I described would look something like this:

As you can see, the athlete is able to execute all their openers on a given day with certainty going off what they are expected to hit on meet day. Simultaneously, they are able to get comfortable with their warm-ups and jump consistently. This day should be executed with the highest level of specificity of the entire training cycle (belt, appropriate commands, singlet, etc) so that they are comfortable and thoroughly prepared.

Due to the nature of the deadlift, the volume and total sets/reps is reduced on this day so that the athlete is able to fully recover before their meet day. The second training day of the taper would consist of last warm-ups performed with a general volume reduction. It would look something similar to this:

The total sets/reps on this day will be lower, but the intensity will remain on par with that of the expected last warm-ups on meet day. This day will often occur 3-4 days before the meet, once again depending upon the athlete’s individual differences, strength level, experience, and history. I will typically omit the deadlift from this day due to the recovery factor and that the deadlift technical curve is so much longer than the squat and bench (You’re able to maintain your Deadlift technique longer due it’s adaptive qualities: See “Stimulus, Recovery, Adaptation (SRA)” by Chad Wesley Smith and Dr. Mike Israetel).

Finally, depending upon the athlete there may be a third day included in the taper that would simply consist of yet another reduction in both volume and intensity of the squat and bench. Sometimes I will implement a light high bar squat, and moderate bench press day 2-3 days out from a meet so that the athlete is able to get a small recovery adaptation from training before they finish the taper heading into the meet. This day is followed by 2-3 full days of rest.

2. Be Aggressive, But Smart

The sport of powerlifting is primarily based around the biggest total – single lifts will not secure you the win in any serious competition. You could have the best squat in the world, but if you go 5/9, or bomb out, then you’re not winning any high-level competitions any time soon (unless of course you’re Yury Belkin, but even then the likelihood of a successful meet day performance drops significantly). As aforementioned in the previous point, planning out openers weeks in advance is crucial for mapping out a successful meet day performance.

Having an Attempt Selection Chart takes the guess work out of potential jumps/attempts on meet day. By doing so it provides the coach with a well though out plan in advance, as well as gives the athlete peace of mind in knowing that there’s a variety of potential attempts as opposed to being stuck in having to hit a number that is set in stone for their second and third attempts. Although, the Attempt Selection Chart will be different based on athlete-to-athlete, this is a very generalized look at how to plan out attempts on meet day in order to achieve the highest potential total possible.

A strong mental preparation is key to any competitive sport, but it’s highly crucial for powerlifting. Lifting maximal loads in a competitive environment isn’t a natural ability and if you don’t have a background in other competitive sports, it can seem like a daunting task to say the least. The concept of planning out meet day openers in advance also ties in with the idea of mental preparation – having as many variables planned out so that once you get to the meet, all that you have to do is listen to your coach and execute the game plan.

Running on @specialk and whey protein. Had to come in and toss up a quick dub with 420LBS. There were 757 thousand people in the gym today post #lafitexpo. Ran with 365 on back down sets of 4. @tina_tornado @dadddylonglegz @megsquats @zooculture #teamjoeyflexx #flexxtrainingsystems #zooculture #powerlifting #benchpress #feetalldaybenchnocare

Another aspect of mental preparation falls upon that of the coach. Joey Ferratti (otherwise known as “Joey Flexx”) often talks about trusting the process and “staying in the pocket” on meet day. Essentially this involves a certain level of mental preparation put upon the athlete, but also trusting in the coach’es abilities to call attempts and execute the game plan laid out weeks in advance. More often than not, things will not go as planned on meet day (for example, changes in schedule, overcrowding of equipment in the warm-up area, less than stellar equipment, or your could experience a combination of all three), but as an athlete it’s your job to execute the plan to the best of your abilities and focus on what you can control.

I left this point for last, but in reality the overall execution of a lift on meet day is the most crucial part of a training cycle. Training must reflect the expectations and realities of the upcoming meet. A great De la Salle High School Football Coach, Coach Ladouceur, was once famously quoted as saying,

“We’re not asking you to be perfect on every play. What we’re asking of you and what you should be asking of each other is to give a perfect effort from snap to whistle.”

The same principle can be applied to powerlifting in the sense that you must give a perfect effort on every single set, rep, and lift leading into meet day so that once you get there and are expected to execute your 9 attempts, you are able to do so with a level of confidence that suggests you’ve done it time and time again in training.

I’m a huge proponent of technical proficiency and lift execution – being able to lift with better technique each and every training session, so that over time you’re under the bar you’re are able to flawlessly execute the lifts with the highest levels of confidence and proficiency. If you go through a training cycle making a serious effort to execute your lifts flawlessly, then it will inevitably carry over to a strong meet day performance. If you only put the minimum amount of effort into your training, you can expect the minimum out come on meet day. 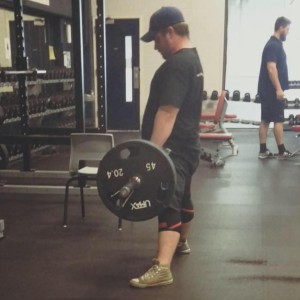 Gage is the Founder and Head Coach at Nova Strength Training Systems in Nova Scotia, Canada. He provides comprehensive programming, analysis, coaching, and general consultation to strength athletes, as well as team sport athletes. He has coached collegiate baseball at Acadia University, youth baseball, while also being a member of the Canadian Forces. Gage has successfully coached dozens of athletes across multiple sports while utilizing both remote coaching, as well as in person.