Every once and awhile, I get to talk with people in our fitness community who know way more about fitness than you and I ever will. When that happens, I just sit back and learn from what they have to say.

I recently got a chance to talk to 42 year old Tina Angelotti, who is not only the Krav Maga Worldwide’s Fitness Director, but is also an accomplished functional fitness athlete. Most recently, Angelotti spent two seasons as a gymnastics specialist on the roster New York Rhinos, and in 2015, placed atop the Masters leaderboard for the CrossFit Team series as part of the Masters of LA.

Also, she accomplished all of this shorlty after having her first child, Maddie, at age 40.

Yep, it’s time to shut up and listen, because clearly, Tina’s figured something out. 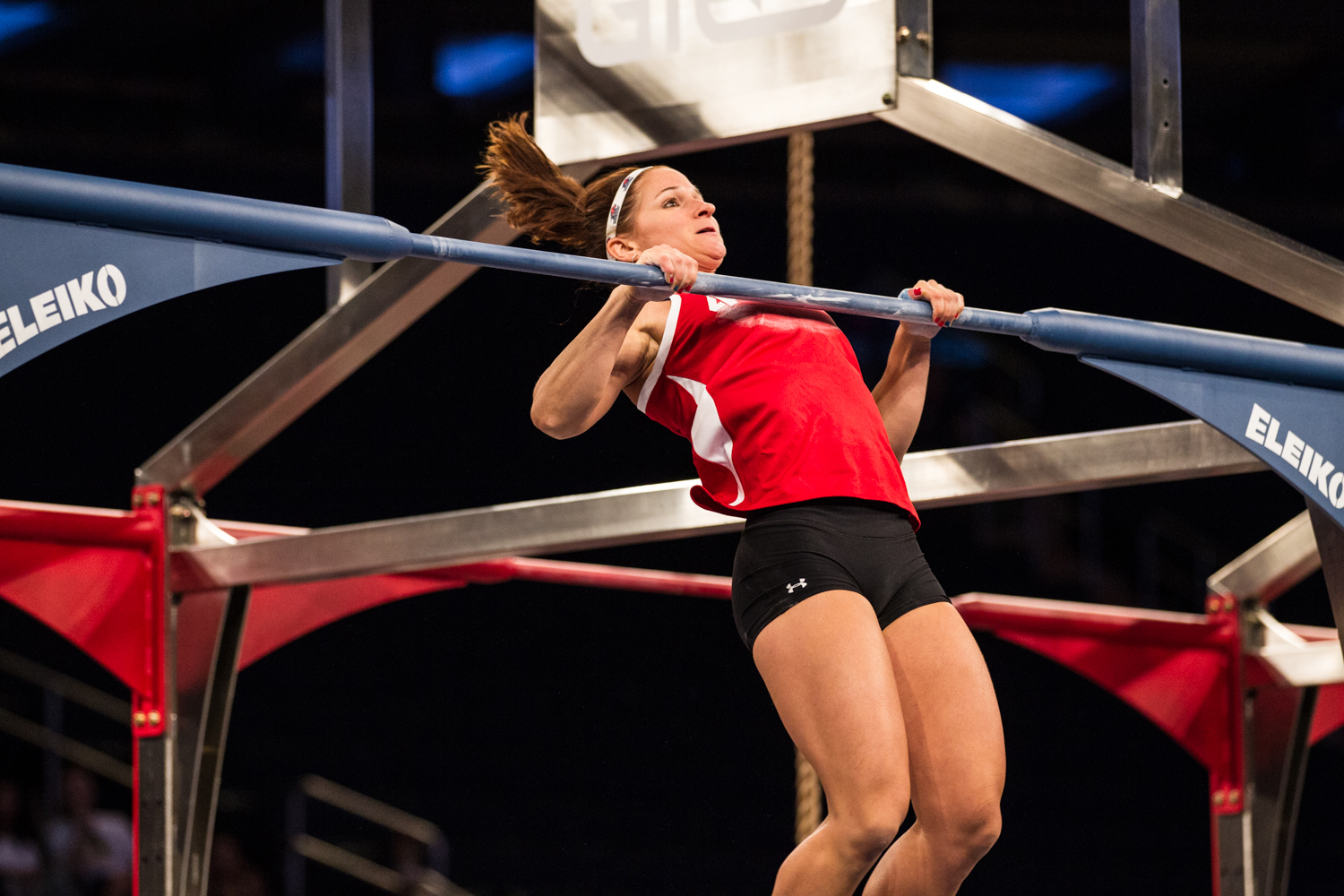 You’ve been in Krav Maga for almost 20 years, and in functional fitness for seven. Obviously you’re an amazing athlete, but how did all that come about?

I was a gymnast. When I quit competing, I started coaching. I coached every level from the Mommy & Me to cheerleading to the adult classes to the competitive team. Eventually, that lead into personal training and group exercise classes like high impact aerobics, then step aerobics, and then spinning and sculpting classes.

As I was doing that, I knew I had a desire to learn more about movement. I went back to school to study kinesiology. I worked as a trainer through school was able to apply what i was learning in school directly to work.

When Tae Bo became really popular, one of the girls who was one of the most popular Tae Bo instructors happened to be an instructor at the gym I was teaching at. She had an exclusive pass to teach Tae Bo one time a week. The class had like 200 people in it. I loved the workout and I loved the intensity, but I didn’t really feel like I knew what I was doing. I was flailing around and I didn’t like how that made me feel. I knew I would like to learn punching and kicking and figure out how to apply it to a group exercise format.

Right as that was happening, I was introduced to an owner at Krav Maga. They wanted to introduce a program kind of like Tae Bo, but they had the same problem as me in that they wanted the class to be more specific to the techniques of striking. So, I started take privates with the owner he taught me how to punch and kick. I took what I learned and applied it to music. It was an 8 count, choreographed group exercise class that also applied the technique of punching — how to stand, how to recoil. It ended up being a really successful class. That’s how I was introduced to Krav Maga.

What was it about Krav Maga that interested you?

Once I got involved, I became more interested in the principles and self defense side of Krav Maga. I love that even though it’s considered a “martial art,” it’s not high on the “art.” It’s high on the “martial.” It’s not pretty and it’s not graceful, but it’s really practical for the street.

There isn’t any sense of everything needing to get done one way. It’s more of whatever works best for your size, your shape, your strength. It’s never the same, and it’s always evolving with whatever is going on in the world.

How did you end up involved with CrossFit?

I started working at Krav Maga 19 years ago. Over the years, I moved into the fitness side [of Krav Maga] because it’s intense and hard on the body. We were doing a lot of kettlebell training and bodyweight movements. We were sort of already moving in a direction [similar to CrossFit.]

Someone introduced me to CrossFit about seven years ago, when I was 35/36. I’d never used a barbell, so I had to go and learn all the barbell stuff. As soon as I felt competent in that, we learned to incorporate CrossFit into the Krav Maga fitness programs. Of course, the more I started to do CrossFit the more I got involved with the competition side of it because all of my gymnastics applied so well. It was to my advantage for a long time — until recently, anyway. I can’t believe what everyone is doing now.

Let’s talk about being a masters athlete. You’re 42 now, and we all know the body’s response to athletic activity changes over time. For someone who’s been athletic their entire life, how do you mentally deal with the physical limitations of not being able to recover as quickly?

[Dealing with that] has turned into the most important part of my training, because when my body aches and hurts, I don’t enjoy the training. I don’t want to train to avoid pain. I want to train to feel strong and powerful and be able to push.

I have to focus on getting enough sleep, because if i don’t eat enough sleep everything hurts. I also do more of the soft tissue stuff, the mashing, and the stretching and mobilizing. More recently — and this really, really, helps — I’ve incorporated more CrossFit-specific strongman exercises like dragging heavy things, yoke carries, farmers walk, prowler sprints. All that stuff that doesn’t require as much stress on the joints, but you’re still able to get strong, work energy systems, work with intensity, and not feel like you’re sore and achy and just beat down.

In the last year, [those exercises] have been really helpful in order to keep going at a high level. Although, I’m not doing as much traditional CrossFit stuff with the barbell. I felt that over time, the barbell was causing more structural damage. I still do barbell work, just not as frequently.

It’s hard as a master athlete to start learning muscle-ups or start learning butterflies. There’s a learning period, where if things aren’t quite right — when you combine a high velocity with not having the right motor pattern and not knowing where your body is supposed to be at what time — that’s when things can go wrong. Fortunately, I already had the skill before I became a master athlete, so now it’s a matter of being able to stay conditioned instead of learning it for the first time.

Has there ever been a point in your career where your body failed you in a way that was surprising or particularly disappointing?

I think that if i would have given birth in my 20s, coming back wouldn’t have been so hard. I had Maddie when I was 40. Coming back to training after I had her took a lot longer than I thought, and it it took much longer than athletes who were younger than me. Having her and coming back, it was so defeating. I wondered if I even wanted to do it anymore. I didn’t not want to do it, but it was almost inevitable.

At the end of the first season, my entire body…every single joint hurt so bad. I was in pain constantly. It was hard to deal with mentally, because I wanted to work and I wanted to do well. I had to take 3 months off after that.

You spent two seasons as one of the 40+ athletes on the New York Rhinos, but we recently found out that the NPGL was eliminating the 40+ requirement. How do you feel about the change?

But, the intensity was getting higher, with more skill and heavier weights. It’s just harder for older athletes to go hard and train that hard and not be able to recover as quickly as younger athletes. 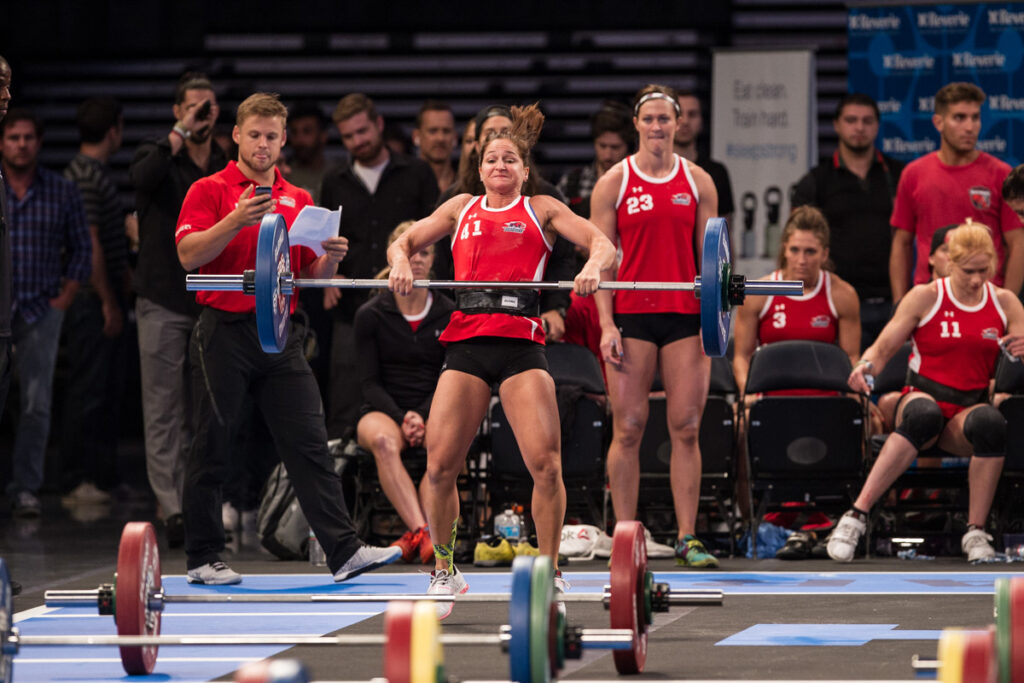 Tell me more about the recovery issue. Do you mean that you have more difficulty recovering during the match itself, or was it more about recovery after the match was over?

I didn’t notice [recovery issues] during a match. The recovery time from race to race was the same as the younger athletes, but it was the days after. It was interesting, because I’d be able to do a match day after day and I would feel okay, but it was two days later, three days later, or getting back to training after two or three matches where I’d feel so achy.

Ah, I understand. With the NPGL no longer an option, what are your current goals in fitness?

I’d love to make it to the CrossFit Games. This past year, I spent a lot of time on strength and I got a lot stronger, so this year of training was a personal victory. It’s great that I got stronger for myself, but everyone else got stronger too! I’m astonished by how strong some of the women are in a masters category.

You’ve managed to balance the NPGL intensity and training for the CrossFit Games while being a new mom. What advice do you have for moms who say they don’t have the time for fitness?

Kids need your attention, and they need to be connected to you. If you can get them connected to movement and to you, you’re taking care of all of it. You have the time for yourself, you’re connecting with the child, and you’re teaching your child exercise time. If you start when they’re young, they come to understand that this is exercise time and this is what’s expected.

How do you incorporate Maddie while training a high level?

I’m fortunate that she’s able to come with me to train, which is a great thing about CrossFit. If I can incorporate her somehow, she loves it. If I’m doing sled drags or harness drags, she just hops on and goes for a ride on the sled. If we’re doing sandbag carries, I’ll give her a ball and she’ll carry it next to me. She’ll run next to me during prowler sprints.

The more I can incorporate her, the easier it is to get the work done without her wanting to be held or wanting attention from Mom. She’s connected with me when she can do it with me. The hardest thing is getting to the gym.

She’s kind of gymnasty! I set up a barbell on the rack and put it all the way down low and tie it around so it doesn’t move, and she just flips around it over and over again. She also has a barbell, and I’ll put it next to mine and she’ll do it with me! They mimic you. When you think they’re not watching, they are are watching.

Now that you have a little you running around, what advice would you give to your younger self?

When I started doing CrossFit, there wasn’t as much coaching and refinement as there is now. I felt like I was part of the development of figuring it out. It really took a toll on my body. I would tell my younger self to have a coach, listen to the coach, and take the time to learn the steps and develop the foundation so it’s something safely sustainable for a long period of time. Then you enjoy the process, instead of feeling beaten up and broken down the whole time.

You’ll feel successful with each step. Find a coach or a mentor and take your time with the process, instead of doing more than you’re ready for. Let it happen naturally and organically.