Jerry Pritchett on Bridging the Gap Between Strongman & Powerlifting

Jerry Pritchett is renowned for his accomplishments in strongman, and for the last half decade, he’s ranked among the world’s best pros. He’s competed at the World’s Strongest Man competition every year since 2012, along with multiple Arnold Strongman Classics.

And this year, the 35 year old Pritchett has also made news in powerlifting, setting American (USPA) and World (IPL) Record 914 pound deadlift on May 1st in Salt Lake City. At 6’4″ and 360 pounds, Pritchett is a top strongman puller, but some have doubted whether he and other pros could pull world-class numbers lifting powerlifting style: no straps, competition bars, no hitching. His recent, gargantuan pull seems to have answered some of those question. 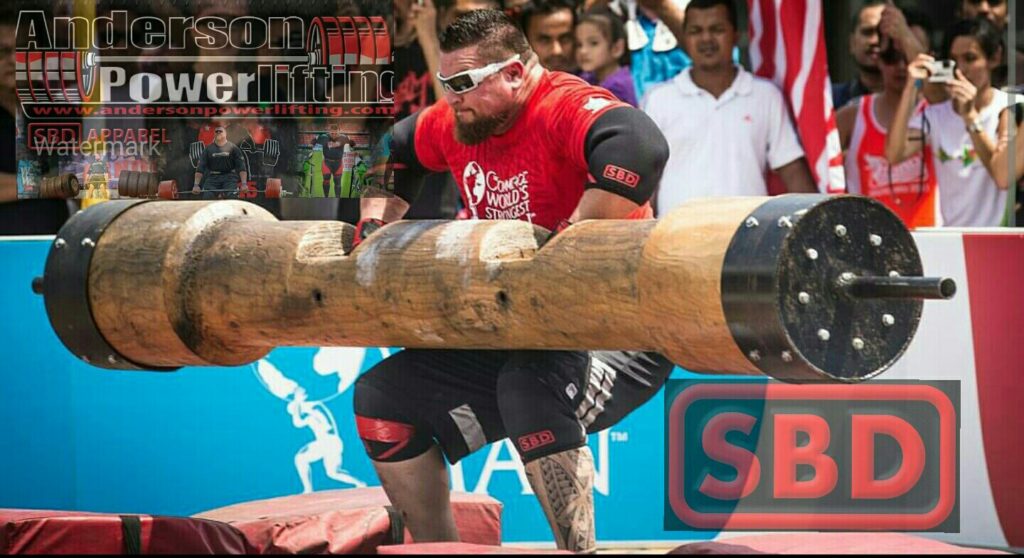 We recently caught up with Pritchett to talk about the carryover between strongman and powerlifting, along with which of the other top strongmen he thinks could make moves in the powerlifting world. We also discussed his upcoming competitions, combining powerlifting and strongman training practices, and how he’s overcome a series of injuries to come back better than ever.

BarBend: You’re best known as one of the world’s top strongmen, but recently you turned some heads with a record deadlift. What led to that competition?

Pritchett: A lot of people know me for strongman, but I started out as a powerlifter. I started powerlifting when I was 15.

In 2008 is when I started in strongman, and I did a few powerlifting meets here and there after that, but eventually I just started focusing on strongman. That record is one I wanted to take down, and I plan on bettering that before the end of the year.

I wanted to go kill that record, and after the Arnold, I saw the competition announced and sent in my entry. I really wasn’t 100% because of all the strongman things going on, World’s Strongest Man was still up in the air as far as scheduling. 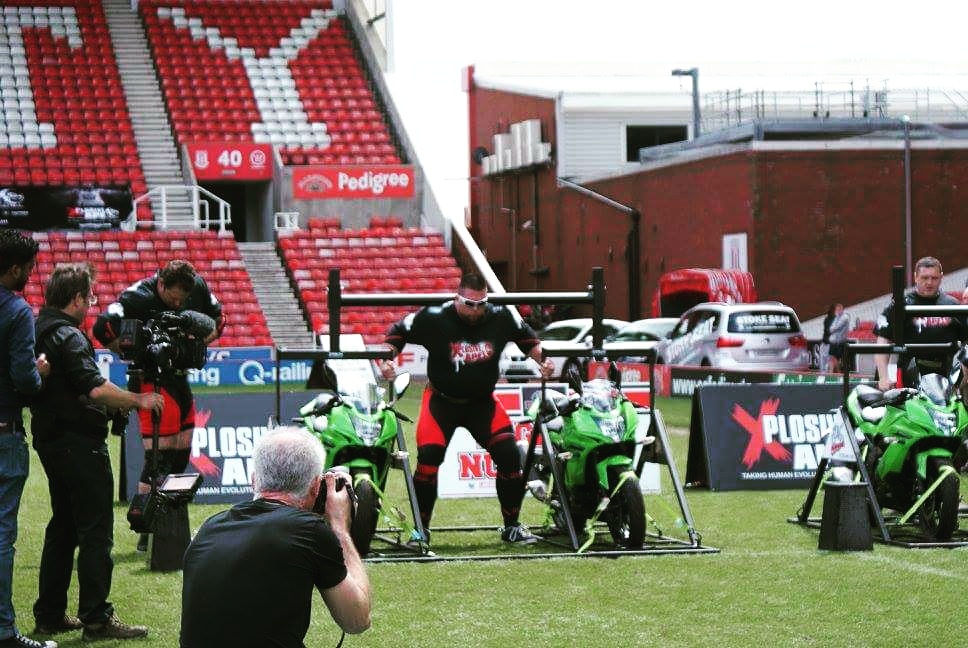 I had done a few regular powerlifting pulls, without straps, and I was having a hard time getting my arm stretched out for the flop/mixed grip. I was feeling some tightness in my forearm and bicep. So I actually scrapped the idea for a few weeks, went back to normal strongman pulling with lifting straps.

A video posted by Jerry Pritchett (@jerrypritchettstrongman) on Apr 25, 2016 at 5:06pm PDT

That’s totally backwards of how you would do a meet, you’d never pull heavy the week of.

Yeah, not exactly tapering there.

It goes against any powerlifting principles, but the way I train for strongman is to be at that top end all the time, 90-95% most of the time.

I did a lot of rehab through the week and felt good Saturday. The opener at 826 I felt a little pull in the bicep, but 914 it felt stretched out and felt great. Originally I was supposed to pull somewhere around 3pm, but I didn’t end up making that 914 pull until around 6pm. I flew back out of Salt Lake City at 8:20.

So you couldn’t take a third attempt because of timing?

That’s right, I didn’t have time for a third attempt. I literally walked off the platform, pulled off my singlet, threw on some pants, and headed out.

The way the 914 felt, I knew the pull would be fine, but I was more concerned about the grip. The grip is usually pretty good with strongman events, and my arms felt great, so I really would have liked to take the third. I would have tried somewhere around the 940 or 950 range.

A video posted by Jerry Pritchett (@jerrypritchettstrongman) on Apr 30, 2016 at 6:40pm PDT

Are there any in injuries that hold you back from training flop/mixed grip more often?

No, not on that arm. My opposite arm, my left bicep, I tore last year at World’s, I had a small tear in the muscle belly. The underhand arm is just really tight from pulling double-overhand for so long. So it took a little more time than normal to get it stretched out where it felt comfortable in that position on the bar.

There’s been a lot of debate online about how strongmen can or can’t pull powerlifting style, and your recent record silenced a lot of those folks. Will we see more strongmen going for big pulls in powerlifting meets?

Of the strongmen, there are a lot of great pullers. But as far as people who have the capability to swap over to powerlifting standards, that number gets pretty small.

There’s a few that stand out that stick out to me as capable because they’ve done it. JF Caron from Canada, Mark Felix obviously, those guys can pull in that mixed grip, maybe high 800s low 900s.

Other guys, I don’t know, but with the right training they probably could. I just don’t know if they could do it quickly. Brian [Shaw], Eddie [Hall], Terry [Hollands], and Thor [Bjornsson] are all great pullers, so I’m sure with the right training they could make the transition. It would just take a little longer than for others who have that background.

So your previous powerlifting career helped out a lot here.

Oh, absolutely. It’s helped strongman. I tell a lot of these guys, guys who just want to do strongman and don’t want to do anything else, the two will build each other. The strength you build in powerlifting has a huge carryover in strongman, and the dynamic movements we do in strongman make big improvements on the platform. When I started doing strongman, my three power lifts went through the roof.

We even incorporated strongman movements several years before I started doing strongman competition. Once I really started pushing strongman, the lifts just got better and better.

You’re obviously a great puller, but if you were to do a full powerlifting meet, how do you think you’d perform.

Unfortunately my bench would be way behind, I tore my left pec three years ago pretty badly. Now, if I went assisted in a shirt, I could probably make up the difference some. If I were to go raw, I’d just have to do a token bench, maybe a 400 bench. It was a pretty bad tear that just never got fixed, so that’d be a big hole for a total.

Squat I think I could get up there. Last year I tore my quad 75% at the World’s Strongest Man, so that kind of set me back in training on my legs and squats. The latter part of last year, in the fall, and this year, it’s coming back around. With a little more time, I could have a pretty competitive squat.

You’ve come back from a few injuries and seem pretty healthy now. What’s left for this year competition-wise?

Right now I’m training for Giants Live in Indiana on June 26th. That’s the first time they’ve had a World’s Strongest Man qualifier on American soil since 2009, I’m very excited about that. On July 9th, I go to England for the World Deadlift Championships. World’s Strongest Man, they haven’t picked a date just yet, it’s sounding like August or September.

What does your taper look like heading into a strongman comp?

I’ll start pulling back on the throttle a couple weeks out, backing off the volume and not going quite as heavy. Week before is basically a walkthrough, week of is mainly physio work, stretching, real light exercises just to get the blood flowing. 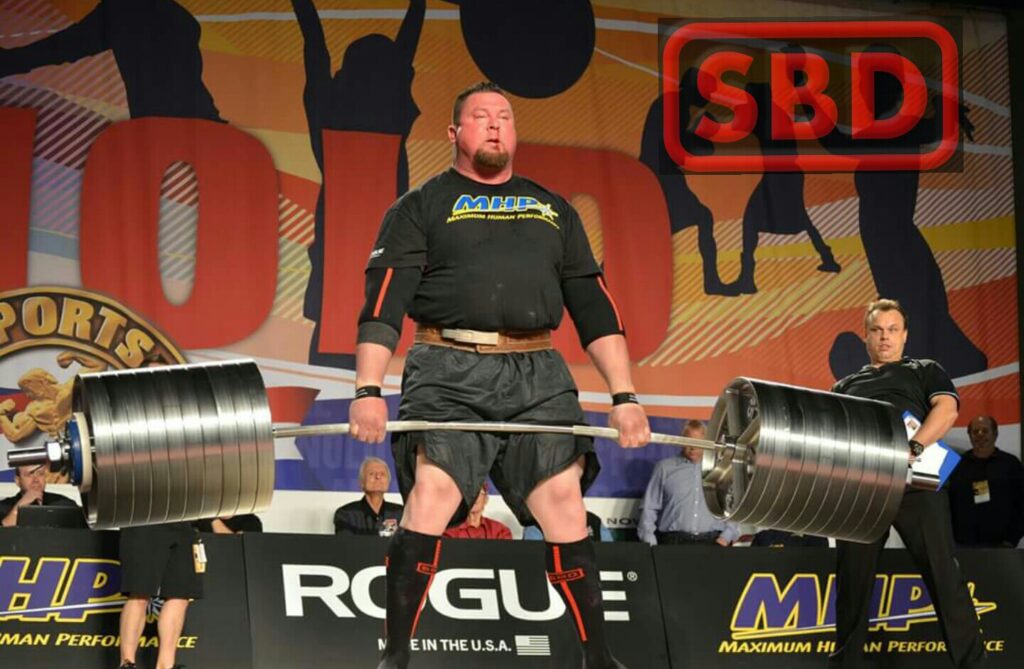 I train during the week in basically powerlifting, bodybuilding type sessions. Weekends is my strongman training, where I hit the events. I’ll hit at least four events on a Saturday, almost a full show on a Saturday. By the time I’m a couple weeks out, I’m ready to pull back on the throttle and start healing up.

Thanks for your time, Jerry. Anyone you’d like to give a shoutout to?

No problem. I want to thank my sponsors for supporting me, of course. Anderson Powerlifting/SBD U.S.A, SBD apparel, ALR Industries, XplosiveApe clothing, and MinoTOR sports drink. They make it possible for me to keep competing, can’t thank them enough.