Master the overhead press to build strong and dynamic shoulders.

Similar to movements like the squat, bench press, and deadlift, the overhead press is a skill so it should be practiced like one. Every time you train the overhead press, technical proficiency should be the goal and this article is designed to help get you there!

In this article, we will discuss a variety of overhead press topics including:

Start by taking a slightly wider than shoulder-width grip on the barbell, or position yourself with the wrists stacked over the elbows. Place the hands on the barbell so the lines of the palm flow with the barbell, as this will provide you with a better base for letting the barbell sit in the “meat of the hands”.

2.
The Walkout and Stance

Walkout the barbell with a two-three step approach and grip the floor with the feet. Stance width should be between hip and slightly wider than shoulder width. Play with different stances to find what works best for you. A wider stance is generally better for providing additional stability.

3.
Tuck the Chin and Brace

Before initiating the press, contract the lats, brace the torso, and tuck the chin. This position will allow you to generate more power because you’re pressing from a stable base. Think about making a shelf with the lats and taking a belly breath that fills the obliques with pressure.

4.
Head Through the Barbell

Press the through the barbell by keeping the barbell positioned in the meat of the hands and bringing it directly overhead. Once the barbell passes the head, you’ll think about contracting the shoulders and shrugging slightly through the bar with the head coming between the arms. Ideally, you the bar to be position overhead in alignment with the mid-foot and heel!

5.
Control the Eccentric and Set Again

Control the eccentric/lowering portion of the movement and tuck the chin, contract the lats, and begin the same process for consecutive reps. Remember to have the bar path remain consistent by keeping it close to the body and repeating the same movement patterns!

A big press starts with a great warmup. The overhead press is a compound movement that requires adequate form, strength, and stability to be technically proficient. That being said, a solid warmup can be a great tool to help prime the body before getting under the barbell.

Below, we’ve included a brief warmup you can try before getting ready to overhead press. In this warmup, we’re going to target multiple prime mover muscles and stabilizers required for the overhead press.

This warmup will be performed in a circuit like fashion and starting weights should be light, then the following set will be slightly heavier if the exercise is weight bearing.

Author’s Note: If you need to perform additional mobility work, then do so before proceeding two these two exercises. For example, working on lat and thoracic mobility would come prior to these movements and the barbell overhead press.

3 Benefits of the Overhead Press 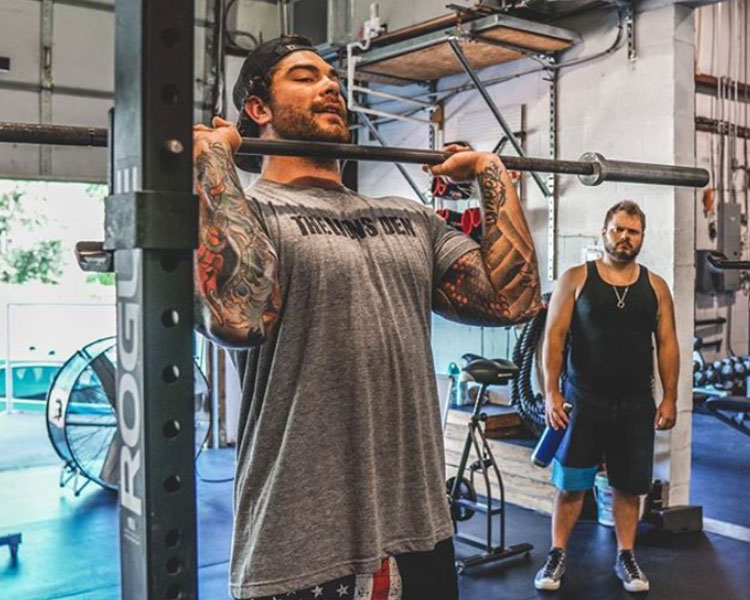 2. Most Bang for Your Buck

Limitations on time can also be a benefit that comes along with the overhead press. Since this movement targets so many muscles, it’s a great option for lifters that want the most bang for their buck at the gym. As opposed to isolation pressing exercises which can be limited in nature, the overhead press has a much higher ceiling for total growth and progression.

The overhead press is a movement that comes with a lot of moving parts, so it’s important to acknowledge common overhead press mistakes to avoid when executing great presses.

1. Pressing Around the Head 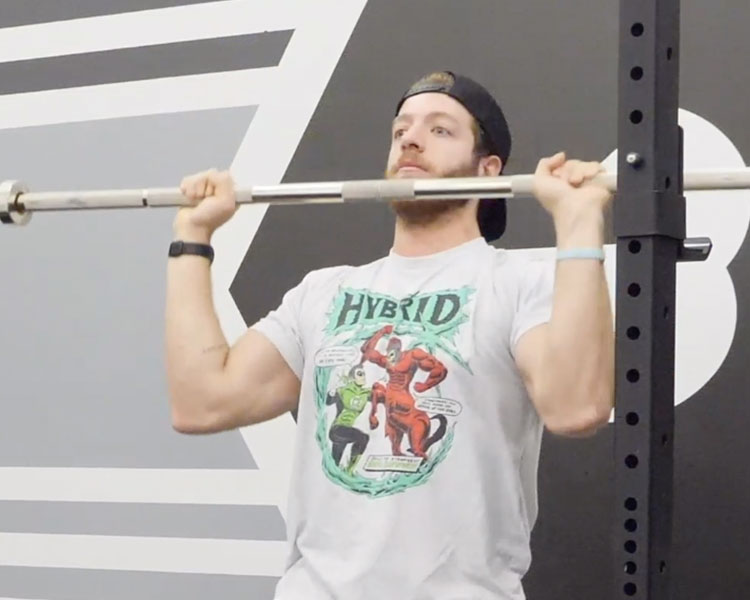 The first overhead press mistake lifters can run into is pressing around the head, which entails shifting bar path to accommodate for one’s head position. This is not ideal because it will move the body into positions where it’s not primed to produce power, a.k.a the joints will not be stacked. 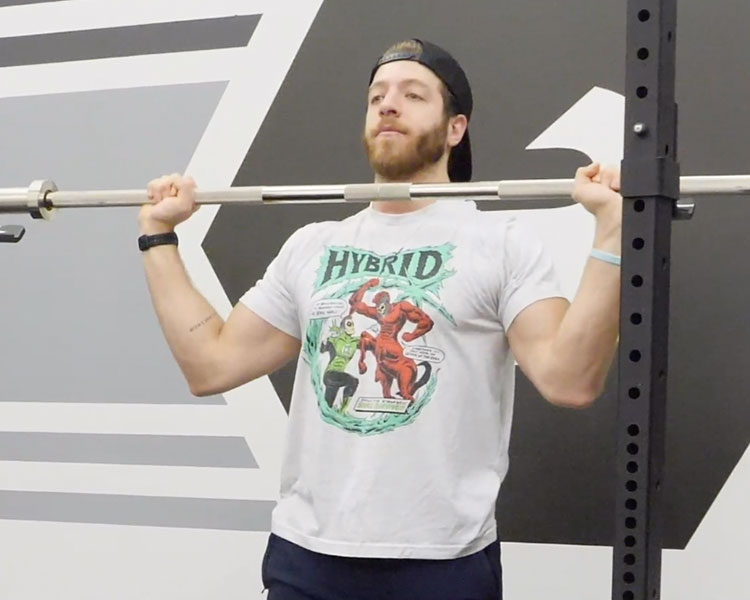 Another common mistake is gripping the barbell too wide. A grip that is too wide can cause power dissipation from the starting position and throughout the first portion of the press because you’re essentially taking the prime movers and putting them into disadvantageous positions.

3. Using Too Narrow of a Stance 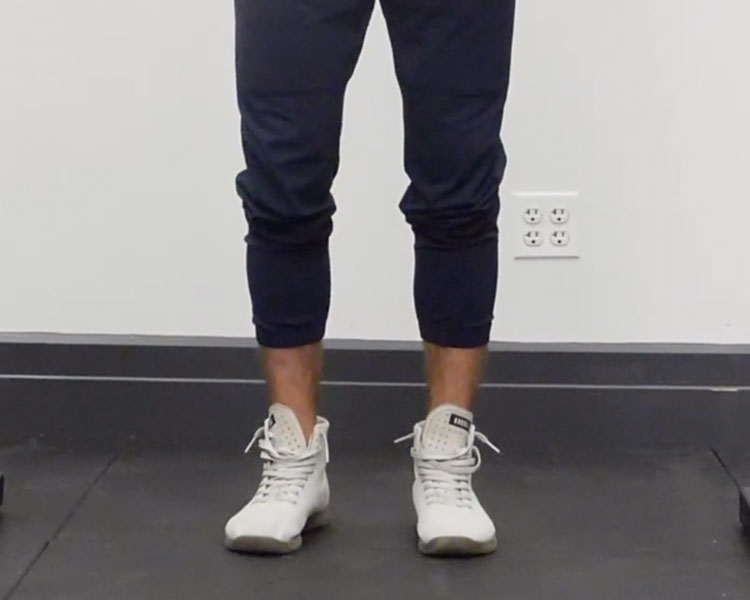 If you’re performing a strict military press that requires a narrow stance, then that’s one thing, but far too often lifters perform their overhead press with a stance that is too narrow. A narrow stance can (a lot) of the times cause lifters to lose stability and balance, so bringing one’s stance wider is often a better bet for success.

The below muscles groups are strengthened and trained during the barbell overhead press. Many of the same muscle groups are also targeted when performing the overhead press with kettlebells and dumbbells.

One small difference that comes with the overhead press compared to isolation exercises and other pressing variations is that it can be a fantastic movement for passively targeting the core. The quads, glutes, and core muscles of the torso will all need to work to stabilize the body when moving weight from a dead stop position to overhead.

The overhead press is a highly technical movement and shouldn’t be taken lightly when first learning its form. To help progress you to perfect presses, we recommend working with the two overhead press progressions below!

The overhead press with dumbbells is a great first option for learning the overhead press. Dumbbells are slightly easier to work with when it comes to nailing form and joint sequencing that’s required for the overhead press. The carryover won’t be perfect to the barbell, but it’s pretty close, and it’s the concept of pressing that is the focal point with this progression.

Start practicing the overhead press with dumbbells from a seated position for a few weeks. Once you feel confidence in your abilities, then take it to a standing position and drop the load slightly. Focus on bracing the body fully and stabilizing accordingly.

It’s important to note that you definitely can progress to the traditional overhead press following dumbbells, but some lifters enjoy perfecting their seated overhead press, then working standing, so it’s a matter of preference in the learning of the press that should take control over exercise selection.

Below are three (3) overhead press alternatives that can be used to improve upper body strength and hypertrophy.

For more advanced lifters who have nailed their overhead press form, the push press with a barbell can be a great option for developing upper body strength and power. The push press entails a lot the same movement mechanics as the overhead press, but has leg drive included.

With the subtle dip to generate power, you can move more weight overhead, which is why strength athletes implement the push press into their regular training for power and strength goals.

Outside of performing the overhead press with dumbbells, the landmine press is another fantastic shoulder pressing variation for getting in additional volume. This variation is fantastic because the way it loads the shoulder joint is slightly different than the directly overhead axial loading that comes with the standard overhead press.

For this reason, we love this variation for accruing addition should training volume while mitigating total stress buildup on the shoulder joints. Progressively overload this variation by adding weight, reps, and tempo.

The Z Press is a seated overhead press with dumbbells (or kettlebells/barbell) that targets the upper body pressing muscles, along with the core and hips. Since you’re in a seated position while performing the Z Press, the body has to work exceptionally hard to stabilize itself for success.

If you’re trying to improve hip mobility, core strength, and pressing mechanics, then employ the Z Press into your shoulder workouts as an accessory. Start with dumbbells and progressively overload with weight, volume, and tempo.

The overhead press is a fantastic movement for building a strong and powerful upper body. If you’re on the quest to improve in the gym and in sport, then it’s probably a great idea to employ the overhead press with a barbell or its variations in your training on a regular basis!

What muscles are worked with the overhead press?

In addition, the overhead press will work a variety of stabilizer muscles include the core, upper traps, and many more!

What's the difference between an overhead press and military press?

Can beginners overhead press with a barbell?

Yes, but it’s a good idea to utilize a coach. Of all the barbell compound movements, the overhead press can be slightly more complicated to nail perfectly when beginning barbell training, so the use of a coach can be a great tool to ensure technical proficiency.

If you don’t want to hire a coach, then it’s a great idea to accomplish the overhead press with dumbbells first, and once you move to the barbell video sets to watch bar path and form.

Why perform the overhead press?

How wide should I grip for the overhead press?

For more recreational lifters, there are two ways to scale grip width to get the most out of your form and potential power production.

When assessing grip width, check if fall into the following range:

If you’re wider than either of these, then there’s a good chance you’re gripping too wide!