Fat Loss and Muscle Gain: The Right Macros for Your Goals

Calories are king, but the balance of protein, carbs, and fat can vary.

More carbs for gaining weight and more fat for losing weight is usually the advice you hear when fitness pros talk about macronutrients — that’s protein, carbs, and fat — for changing body composition.

But what might be more important than macronutrient ratios is making sure you hit minimum thresholds of each macronutrient. Once you know you’re getting enough protein, carbs, and fat to retain muscle, maintain activity levels, and manage your hormones, then you have more freedom to add to your macros as you see fit.

For this article, we’ve spoken to a PhD in Sports Nutrition and a sports dietitian to learn the long and short of:

So let’s start with the most popular question on the internet: how fast can I lose fat?

[To get your own macro recommendations, use our macros calculator for muscle gain and fat loss!]

For starts, you need to work out your calories. There are many calculators online to figure out your Total Daily Energy Expenditure (TDEE), which takes into account the amount of calories the body burns at rest, the amount it burns from activity, and the amount burned from eating food.

If you want to get a little more precise, bodybuilder and researcher Dr. Eric Trexler of Stronger By Science prefers to base his calorie deficits on bodyweight: if you’re obese, you can likely lose more than a pound per week, if you’re closing in on a physique competition, it’ll be a little slower going. So he likes to use percentages of bodyweight instead.

“That’s why when cutting, usually you want to shoot for weight loss of 0.5 to 1 percent body weight per week,” he says. “So if you’re 200 pounds that’s 1 or 2 pounds per week. Especially as you get leaner, rapid weight loss can really take a hit on performance and retention of muscle mass, so the total number of calories is really important as well as the macronutrient ratios.”

So what are the macro ratios? You basically land on your minimum protein intake, minimum fat intake, and fill in most of the rest with carbs.

Dr. Trexler agrees with our very good article on the ideal amount of protein to consume: 1.6 to 2.2 grams of protein per kilogram of bodyweight, or 0.7 to 1 gram per pound.

“A lot of people are taken aback by that number because the recommended daily allowance in the United States is about half of that,” he says. “But those values are to make sure you’re not protein deficient. They’re not to make sure you’ve used protein to fully optimize your performance and body composition goals.”

And if you’re very lean, very muscular, and still trying to lose weight, you might want to increase protein even more than that. A popular paper published in the Journal of the International Society of Sports Nutrition in 2014 found that among bodybuilders who were leaning out for a competition, it was more optimal to increase protein to 2.3 to 3.1 grams per kilogram of fat free mass.(1) (“Fat free mass” is your bodyweight minus your percentage of body fat.)

“Since not a lot of people can accurately measure their fat free mass, I use a simpler formula for the average person,” says Trexler. “If you’re lean, it’s usually 2.2 to 3 grams of total bodyweight in kilograms. If you’re not quite as lean, say you’re over 20 percent body fat, it’s closer to 1.8 to 2.3 grams per kilogram.”

Don’t eliminate fat. It has more than twice the calories of protein and carbs, sure, but it’s critically important for providing essential fatty acids, it helps with hormone production, maintains cell walls, improves nutrient absorption of fat-soluble Vitamins (like Vitamin D), and look, it’s tasty as well. 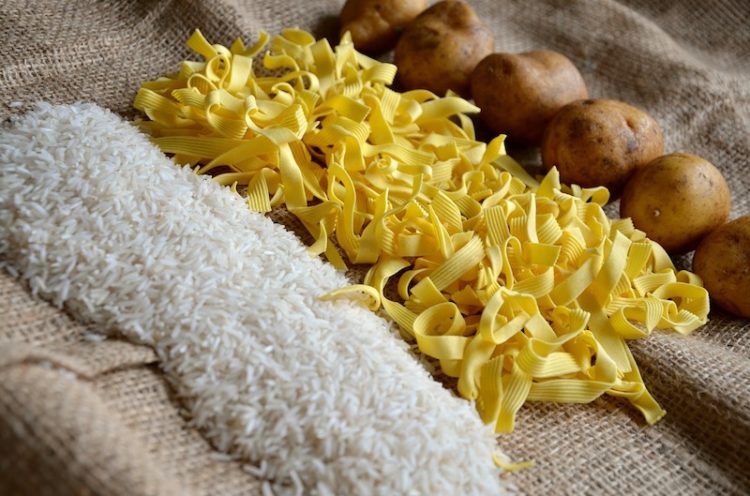 At this point in your fat loss diet you’ve got your daily calories, protein, and fat, probably with about 30 to 50 percent of your calories unaccounted for. They should mostly, if not entirely be carbohydrates.

“When you’re cutting weight and you’re in a hypocaloric situation, you really have to try and work as much carbohydrate in as you can,” says Trexler. “The benefits being that it’ll help fuel whatever training you’re able to do. Once you’re very lean and calories are low, training takes a hit and you can use as much carbohydrate as you can get.”

Plus, if you go too low in carbs, it can mess with hormones. Leptin, for instance, is a hormone that’s involved with fat gain and the body’s production of it can be suboptimal when one’s diet is low in calories and carbs. Plus insulin is anabolic, so getting enough carbs can indeed help with muscle gain and retention.(2)

Let’s say you weigh 200 pounds, burn 2,500 calories a day, and are in decent shape but not incredibly lean. A plan to lose a pound of fat per week would look like:

[Related: The Athlete’s Guide to Fat Loss and Hormones]

So what’s different if you’re trying to gain muscle? Basically, you can be less strict.

You’re eating more calories so you’re less likely to be low on any of the macronutrients — it’s not hard to reach those aforementioned minimums that you need to be mindful of when you’re hypocaloric.

“To gain as much muscle and minimize as much fat as possible, I’d suggest an extra 100 to 200 calories per day,” says Rizzo. “That’s about half a pound of weight gain per week.”

“If I’ve got someone who’s bulking, usually we’ll shoot for a target weight gain of 0.25 to 0.5 percent of bodyweight per week.”

“If I’ve got someone who’s bulking, usually we’ll shoot for a target weight gain of 0.25 to 0.5 percent of bodyweight per week,” he says. “You want to be so careful because you can only gain so much muscle in so much time. If you have a really rapid weight gain, we can be confident that a lot of that weight is weight you probably didn’t want to gain.”

Now, again, this depends a little on your training experience. I you’re really thin and you’ve never worked out before, you can probably gain muscle more quickly than that. If you’re very experienced, have a lot of muscle, and have been training for several years, muscle gain might be a bit slower. But these are good guidelines for the average athlete.

Again, you’re meeting those baselines described above, so the main difference is you have more flexibility. Since your calorie intake is higher, that calorie gap between protein and fat that you’re filing with carbs is going to be bigger and it’s generally recommended to keep filling that gap with carbs. But you have an allowance for more fat if you so prefer.

“A general range would be to get 3 to  5 grams of carbs per kilogram of bodyweight when bulking, to make sure you have enough carbs to fuel training and get your energy in,” says Trexler. “(But) even if your main exercise is lifting weights, that exact ratio (of carbs and fat) doesn’t matter that much when bulking, because as long as you have 2 or 300 grams of carbs per day, depending on your body size, you’re probably going to be just fine.”

So here’s a rough idea of what that looks like if that 200-pound fellow wanted to bulk up.

So that’s the most important information.

This depends on how often you’re working out and how much of a headache you want dieting to be, but man find it effective and there is evidence that timing your carbohydrate and calorie intake around workouts is useful for optimizing performance and recovery, managing appetite, helping insulin sensitivity.(3)(4)(5)(6)(7)

“It’s interesting, there’s actually research that it is beneficial and it’s not some crazy trend people picked up along the way,” says Rizzo. “People look to have more carbs on workout days because carbs fuel your workouts, and they cut their carbs on recovery days. The reason this came about was because a lot of people were following these low carb diets and finding that they’re not sustainable in the long term because the body craves carbs to fuel your exercise. People found that if they had more carbs on exercise days, they would have the energy they need, but they don’t necessarily need that on the rest days because they’re not doing as much working out.”

So if your calories and macros are on point at the end of the week, some people like to manipulate them up and down based on whether or not they’re exercising.

[Related: The Ultimate Guide to Carb Cycling for Fat Loss]

Carb cycling is an option, but remember to prioritize your efforts in roughly this order:

That’s a bit of an oversimplification, but the idea is to pick your battles. Only when all the other pieces are in place is it worth thinking about meal timing, which is to say carb cycling — move the big rocks before the smaller stones.

How many calories should I eat to lose weight?

A general recommendation is that a maximum rate of fat loss is a pound per week. That’s a 3,500 calorie deficit per week. So find out how many calories you burn in a day and subtract 500 from that on average.

How many calories should I eat to gain muscle?

Find out the number of calories you burn in a day and add 100 to 200 per day, every day, combined with heavy resistance training. Alternatively, try to gain no more than 0.25 to 0.5 percent of your bodyweight per week.

What is carb cycling?

Carb cycling is the practice of eating more carbohydrates and calories on days you exercise and fewer on rest days. It may help to increase muscle gain and fat loss to a small degree.