The Best Slam Balls on the Market in 2021

Slam your way into a full-body workout with the best slam balls to date.

Written by Carmen Corchado
We receive free products to review and may receive commissions on purchases made through our links. See our disclosure page for details.

From squats to overhead presses, slam balls have the resistance and versatility to build strength in your entire body. You can also slam them against a wall and almost any surface making them a great tool for functional training and cardio. Not to mention you can use them as therapy for your pent up aggression.

Slam balls all serve the same function, but there are some differences that may be impact how and why they’re used. We’ve rounded up the best slam balls to help you choose which one is right for you and your training.

Rep Fitness steps up their game with a thicker and more robust slam ball than their first incarnation.

With a 50% thicker rubber shell and a strengthened air nozzle, this slam ball is an upgrade from the original Rep Fitness Slam Ball. The shifting sand inside forces you to execute your movements properly as it will pull you in the direction in which it is tossed if you don’t engage your core and control your center of gravity. The improvements don’t come at an extra cost as these are some of the most affordable slam balls in the market.

With a grippy rubber shell and a moving sand-filled center, this slam ball adds extra resistance to your workout.

The Rep Fitness V2 Slam Balls take the best overall pick as it hits the mark on construction and adds the shifting center to work your resistance and control.

A grip-friendly option with no shifting center, this pick is a model representation of a classic slam ball.

You won’t find anything out of the ordinary with these slam balls. The Echo Slam Balls have a rubberized shell that is so durable Rogue backs it up with a two-year warranty. These slam balls are well balanced since the center doesn’t move at all and it provides just a little bounce on the return.

With little bounce and no shifting center, this slam ball delivers standard performance. The red color variety also makes it stand out in a sea of black slam balls.

Providing just what you need for a fundamental slam ball drill, this pick delivers the fundamental features without any added bells and whistles.

If you’re looking for a ball with the sole purpose of slamming them as hard as you can then an option with no bounce might be the best for you.

This pick is ideal for ball slams. The Titan Fitness Slam Ball can help you increase your explosiveness without the fear of the ball bouncing back onto your face. With no rebound, this slam ball also works your hand-eye coordination as it falls heavy and must be caught quickly after being thrown against walls or tossed from training partners.

This slam ball is typical in design but its dead bounce makes it a great choice to train aspects other than strength like range of motion, hand-eye coordination, and speed.

Most slam balls have a little bounce to them but you’ll be forced to do all the work as these remain dead on impact.

While most slam balls have raised grip lines, one with treads on the surface might help even further your hold.

These slam balls have tire tracks that prevent them from slipping out of your hands. This pattern is found all around the surface which makes them ideal for long and sweaty sessions. These slam balls also go up to 200 lbs making them the only pick on this list to offer that size.

The treads on these slam balls enhance grip ability but are still comfortable to handle with their rubberized shell.

Who Should Buy American Slam Balls

These slam balls will serve you with their treaded shell as you increase your weighted resistance without costing you your grip.

Slams balls and medicine balls are not the same. With this pick, you don’t have to choose one over the other.

With its gel-filled interior, this pick gives off the feel of a traditional medicine ball. While its rubber exterior still makes it sturdy enough to handle violent and rigorous throws, its density allows it to withstand medicine ball workouts like push-ups and planks. This pick also comes in an eight-pound, 12 lb, and 16 lb option which is sometimes hard to find in other slam balls.

Categorized as speed balls, strength balls, or super balls, this pick is beneficial for slam ball and medicine ball workouts.

Who Should Buy DBall Medicine Balls

Medicine balls are usually not constructed to take the impact of some slam ball workouts but thankfully, this pick is built to work as both.

Best Slam Balls to Buy as a Set

You might need to increase your weighted resistance as you get stronger. A set of slam balls might have you covered.

Another classically designed slam ball on our list, what distinguishes this pick from the rest is the option to buy several weights as a set. The sets include a ten pound, 15 lb, and 20 lb variety and an alternative that adds higher increments up to 50 lb. Buying the sets will also save you some extra cash.

This pick on our list gives you the option to buy the slam balls individually or as a set. The variety set benefits strength training and speed drills.

Who Should Buy DBall Medicine Balls

A set of medicine balls is not only a great way to build a gym but they will also ensure you’ll consistently build strength over time.

What are Slam Balls?

Whether they’re being passed to a partner, tossed against a wall, or slammed into the ground, slam balls are constructed to endure high impact. Their tough shells are usually made of rubber to withstand any surface and it also allows for strong grips during catch and release drills. Combine that outer shell with a sand or gel filling and you have a ball that doesn’t bounce or ricochets onto your face. 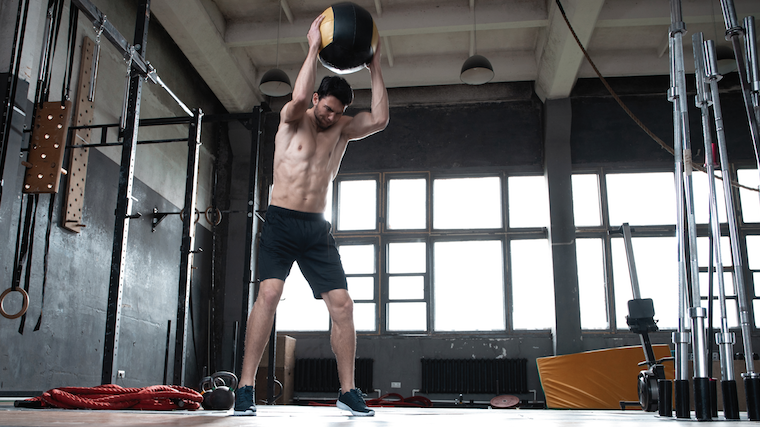 Some people make the mistake of using medicine balls as slam balls. They realize the error when it’s already too late. The medicine ball has popped and the gym owner is asking them to clean up the sand that has spread all over the mats.

An easy way to remember which type of ball to use during your exercise is to consider if it involves propelling the ball with intense force or not. If so, choose a slam ball. It’ll not only be the correct tool for your workout but it’ll also save you from having to buy another ball sooner than later.

Different slam balls are similar in their basic functionality but some serve specific needs better than others. Before buying consider your level of expertise. For instance, if you’re a beginner or if your hands are sweatier than most, you might want a slam ball with a treaded shell. This will help as you build your grip strength.

The next aspect to consider is if you want the ball to bounce or not. If you’re using your slam ball for ab exercises, you don’t necessarily need a ball with a bounce. But if you’re doing a partner drill like a slam pass, you might want to look into a slam ball with a bounce so that it can return to you and your partner easier. 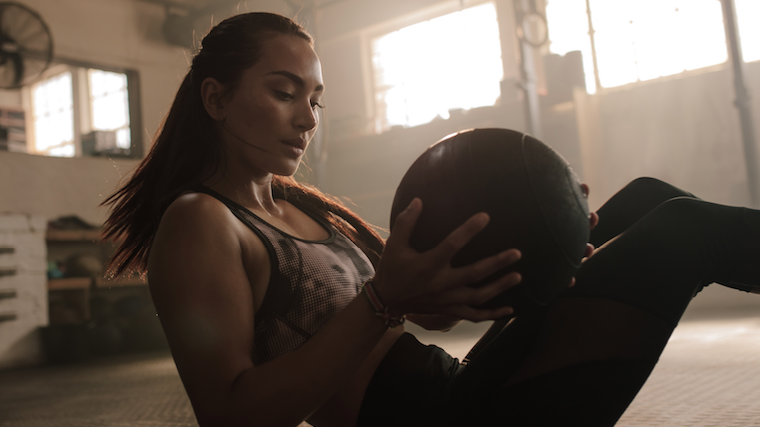 It’s also important to consider what type of weight you need for your training. While weight is important for strength training it’s also essential to improve your speed and mobility. Lower weights work well during speed and reaction drills while also benefiting rotational exercises like halos or a wall side toss.

Heavier weights are useful in exercises like shoulder throws or carries. Before choosing, make sure your pick goes up to the weight you need. Some brands only have standard sizes ranging from five pounds to 50 lb while others only go as low as 50lbs but reach up to 200lbs.

The last thing to consider is price. While a standard 10-pound slam ball will cost an average of $20 to $30, some come in at a heftier price of $100 and up. If you’re on a budget, know that they’re affordable options on the market. Also, see if your pick has a warranty as this usually means the company is confident their ball is durable and strong enough to withstand any type of slam.

Slam balls are a versatile tool any athlete can use for almost any workout. Other than being thrown and tossed, they can be lifted, rolled, and balanced on. Use the best slam balls on this list to enhance your training and as a way to engage every muscle in your body.