Dumbbells Vs Kettlebells: Which Is Best for My Goals?

When deciding between a dumbbell and kettlebell, it all comes down to the context of their use.

At some point in your lifting career you’ve probably wondered, “What’s better to use? A kettlebell or dumbbell?” That question, while common and valid, doesn’t truly answer the initial ask despite it seeming like a simple one or the other style question.

Instead, the better question to ask is, “Which is better for the particular workout and goals I’m working towards, the dumbbell or kettlebell?” Context is everything.

Whether you’re investing in your own kettlebells or dumbbells, or simply trying to decide which to use for your next exercise, this guide is designed to help you along the way. This article is not intended to sway you into using over the other, but to point out some considerations to take into account when employing kettlebells and dumbbells.

To fully understand the context of when to employ the dumbbell and kettlebell in training, then it’s a good idea to first breakdown some key differences between them.

A lot of the differences between the kettlebell and dumbbells can easily be identified by their appearance, after all, they look very different. However, without a deeper knowledge of weight displacement, strength curves, application to training, and biomechanics, then the physical differences don’t really mean much.

For example, it’s easy to see that there’s a handle above the kettlebell’s center of mass, but how will this change the kettlebell’s best uses in training? Similarly, will the evenly displaced weight of the dumbbell heads shift mechanics and application?

The above physical differences are pretty easy to see and wrap one’s head around, but their understanding is crucial for application of each implement’s use in training when facilitating adaptations — more on that below.

Kettlebell Vs Dumbbells for Strength

Center of mass of these two implements is important to understand because it has the potential to shift the stress of the external load being put on the desired muscle and joint with the exercise of choosing. 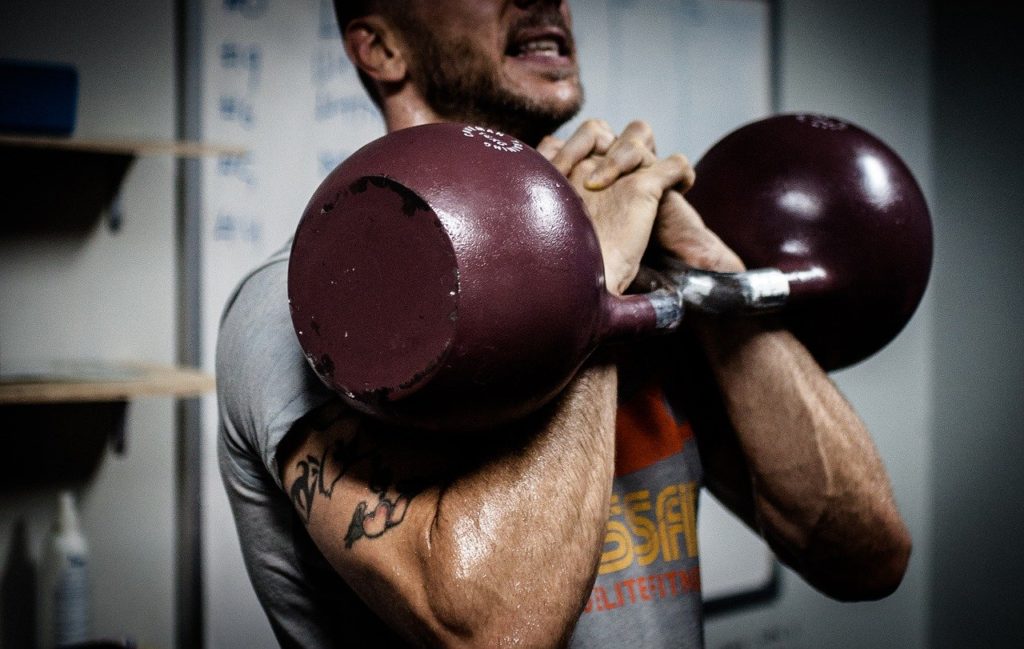 Take bands or a machine on a preacher curl for example, they provide a constant tension throughout the full range of motion, which will differ from a dumbbell’s strength curve slightly due to gravity playing a role on the movement’s difficulty at various points. Thus, strength curves will vary based on the muscle and joints being used, along with the range of motion they’re working through and the implement chosen.

The same strength curve logic can be applied for kettlebells and dumbbells when assessing their use for certain exercises. Their center of mass is different, so the way in which they create difficulty for various exercises in certain ranges of motion will vary slightly.

Dumbbells Vs Kettlebells and Muscle Activation In Research

An interesting example of the above in research comes from a study published in 2018 that compared EMG activity of the anterior deltoid and pectoralis major when subjects performed either a seated dumbbell overhead press or a seated kettlebell overhead press. (2) Both overhead presses were performed with equal loads to keep work output consistent.

Upon their analysis, researchers suggested that the dumbbell overhead press had slightly higher anterior deltoid EMG than the kettlebell while the pectoralis major was similar in both exercises. Authors speculated that the difference in the anterior deltoid potentially had to do with the alignment of the dumbbell and kettlebell and how this might have affected the primary movers in the overhead press.

The dumbbell sits directly over the palm, while the kettlebell sits behind the wrist, which then creates a slight torque (external rotation) in the glenohumeral joint. This difference could have been the reason that the dumbbells produced more muscle activity than the kettlebell, as its load was more direct and consistent on the primary movers of the overhead press.

It’s worth noting however that those were the only two muscles that authors investigated in this study, so the stabilizer muscles that are often suggested to be higher with kettlebell use were not explored.

So what could this potentially mean?

Research is still sparse on the comparison between the dumbbell and kettlebell and muscle activation for a variety of exercises, but the above does offer some great food for thought.

When selecting between a dumbbell and kettlebell for muscle activation purposes consider how they load the body — more specifically the primary movers of an exercise — through the range of motion being trained. Likely, their differences are not large enough to warrant that big of a concern for most lifters, however, it can still useful to consider the following:

By taking the above into consideration, we can take the best course of action for facilitating a desired adaptation at hand, A.K.A strength. At the end of the day, quality programming and reps will weigh heaviest in the long run for strength and hypertrophy adaptations.

Which to Use: Both, but if given the opportunity base dumbbell and kettlebell selection on the primary movers and range of motion being trained! Basically, think deeper into the strength and stability adaptation you’re seeking out.

Kettlebells Vs Dumbbells for Power

Similar to the strength component above, kettlebells and dumbbells both have the potential to help improve a lifter’s power. However, the caveat between the two is their ease of use and the exercise trying to be performed.

Generally speaking, power-based training will include dynamic movements and exercises will require higher velocities. Thus, kettlebells are usually a go-to for power because their construction is conducive to exercises programmed that are dynamic in nature.

Movements like the kettlebell swing, clean & jerk, and snatch are all exercises that can be programmed for the adaptation of power that the dumbbell falls slightly short on. For example, a 2012 study published in the Journal of Strength & Conditioning Research suggested that kettlebell swings were a viable option for improving maximal and explosive strength production. (3)

When it comes to increasing power, it’s important to acknowledge the equation for power as this can also help dictate the implement chosen.

For athletes trying to improve power, then generally speaking, the kettlebell will be a friendlier option to do so based on its construction and ease of use. The construction of a kettlebell and its traditional movements are useful for increasing the amount of work you can put in over a desired period of time.

Dumbbells are also viable options for increasing power, however, they can be limited by their construction.

Which to Use: If you have them and based on the movements being performed, opt for kettlebells. However, dumbbells can suffice, but exercises will be limited.

Kettlebells Vs Dumbbells for Cardio

For cardio improvement, both dumbbells and kettlebells are great options and it comes down to the workout style being performed.

There are plenty of kettlebell and dumbbell complexes that are designed to improve cardiovascular fitness and the only limitation with this adaptation is one’s creativity with their training and flows.

It’s worth noting that kettlebells are usually the “better” bet when it comes to performing flows and consecutive exercises with dynamic reps, but a dumbbell will suffice just fine depending on the exercises selected. Compared to other forms of metabolic training, kettlebell HIIT training has been suggested to be a comparable and a more sustainable option when compared to sprint HIIT training. (4)

Which to Use: Both! Kettlebells will be slightly better when it comes to ease of use, but both are great options for cardio-focused workouts.

Kettlebells Vs Dumbbells: What Really Matters

At the end of the day, the differences between kettlebells and dumbbells go out the window without quality programming that accounts for multiple training variables, exercise selection, and an individual’s goals and needs.

The dumbbell and kettlebell are both great implements for targeting training various training adaptations.

What matters most is quality programming that considers multiple factors that help direct lifters closer to their goals and needs.

The dumbbell and kettlebell are both solid option for pushing personal fitness further. Both implements offer plenty of benefits and their best uses come down the context in which one plans to utilize them.

Can beginners train with kettlebells?

Yes, absolutely. Beginners can train with kettlebells with no problem, however, it’s worth pointing out that form should take precedence of one’s focus when using them for the first few workouts.

What are the differences between kettlebells and dumbbells?

Kettlebells have a center of mass that falls below the handle, while dumbbells evenly displace weight on each side of the handle. This makes the dumbbell and kettlebell useful for certain exercises and adaptations, as each will be better suit for particular exercises!

If weight is equal, are the dumbbell and kettlebell different?

Yes, to an extent.

This question is better asked when you consider the movement being performed and rationale behind why it’s being performed. Both dumbbells and kettlebells work great for developing strength, power, and cardiovascular fitness, and what matter most is the quality of their movements and programming.

Can exercises like kettlebell swings be performed with dumbbell?

To a degree, but it won’t be ideal. The kettlebell’s handle is wider, so it fits two hands better and the weight is further from the body so it accommodates the swinging motion slightly better than what a dumbbell would do.

Can you just perform all exercises with a dumbbell or a kettlebell?

Yes, you can do whatever you wish! The only discrepancy that might come into play is the type of workout desired to be performed. For example, dumbbells will usually feel more natural to use during static strength movements, while kettlebells will feel much better during dynamic movements like cleans, swings, and snatches.