Turn Your Core Training Up a Notch With the Russian Twist

While not a sugary baked good as the name might imply, the Russian twist can definitely sweeten up your core training.

If you are looking for a core exercise that can help you increase rotational stability and athletic performance, Russian twists are for you. The Russian twist is a core training staple that is popular in general fitness circles and athletic populations alike.

It specifically attacks the obliques, which are responsible for aiding in core stability during various athletic movements, as well as enhancing rotational power. The obliques are also a critical part of a well-developed, aesthetic midsection.

In this exercise guide, we will detail all the information you need to maximize your training and increase your core strength with Russian twists.

How to Do the Russian Twist Step by Step

Below is a step-by-step guide on how to properly perform the Russian twist, which can be done using a weighted ball, plate, dumbbell, or kettlebell.

Start by sitting on the ground with your legs lifted and extended out in front of you. Beginner trainees can reduce the difficulty of the exercise by bending the knees. While keeping the torso erect, hold a weight, cable, or clasp your hands together at chest level.

Coach’s Tip: Holding yourself in this position should be challenging, and can even work as an isometric plank variation. 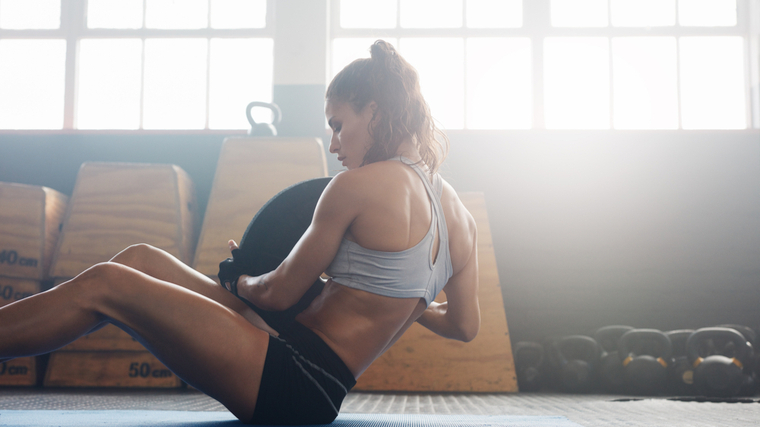 With full body tension established, allow the upper torso to rotate side to side, leading with your hands or the load you’re holding. The greater range of motion of the twist, the more challenging the movement is.

Coach’s Tip: It is important to keep the buttocks firmly planted on the floor to minimize leaning or loss of balance. Stay controlled and smooth.

The Russian twist is a straightforward movement, however it should be done with a strong emphasis on rotational control and balance. Perform additional repetitions smoothly and avoid letting your feet touch the floor if possible.

Coach’s Tip: Once you are able to do the reps slow and controlled, you can start to integrate more explosive twists or add resistance.

Benefits of the Russian Twist

The Russian twist can be scaled to fit any level of lifter, however athletes of any level can benefit from including them in their core training and power routines. Below are three benefits of the Russian twist.

Rotational training is key for most athletic sports as well as aesthetic development of the core. Movements like the Russian twist can help lifters increase the muscles’ ability to support movement at the spine by countering the rotational forces placed upon it.

Anti-rotational training can have a great deal of application to strength, power, and fitness as core stabilization can help to assist in the snatch, squat, or deadlift. Increasing your ability to stabilize the spine and torso during loaded movements can enhance both safety and force output.

When discussing muscle actions, people most commonly think of the contraction and lengthening phases (concentric and eccentric). Isometric contractions are key for most strength, power, and fitness movements as well, as they can help us maintain rigidity and tension in one part of the body while other areas are in motion.

The Russian twist can help create core isometric strength at the pelvis while adding a dynamic motion at the spine, resulting in better core stability and control for things like gymnastics, weightlifting, and endurance training.

Muscles Worked by the Russian Twist

The Russian twist is a core exercise that targets most of the muscles of the torso and spinal stabilizers such as the transverse abdominis and external obliques. The below muscle groups are targeted when performing the Russian twist either with bodyweight or under load (medicine ball, plate twist, etc), however note that most of the core muscles are used at some point in the exercise.

The obliques are the core muscles that are on the lateral aspect of the midsection. They play a critical role in supporting the body during movements of all sorts. The obliques aid in rotational movements, but also resist unwanted rotational forces placed on the spine.

The rectus abdominis is the anterior muscle of the core that is primarily responsible for spinal flexion and aims to resist spinal extension. While the Russian twist is a rotational movement, the abdominals are isometrically contracting to maintain a rigid position to support you while you stay upright in the movement.

Who Should Do the Russian Twist

Below is a more complete breakdown discussing how Russian twists can be beneficial for various goals or sports.

The vast majority of core strengthening and stabilization training occurs when load is placed on the body during heavy lifts. Russian twists won’t replace this, however adding them to your routine can help supplement the core work provided by strength training.

Most fitness athletes will use Russian twists to attack the same muscle groups that are used on a frequent basis when running, cycling, swimming, or doing calisthenics. The obliques play a critical role in spinal stabilization for almost every human movement, which is exactly why adding them to your training now could pay off for you in the future.

Most gymgoers will perform Russian twists with the hopes of removing stubborn fat around the midsection. While shedding fat has more to do with diet than training, Russian twists can help develop the muscles of the trunk to both enhance performance and improve the appearance of the abs.

Once you have determined that Russian twists are a valuable core exercise to integrate into your training, you need to tailor the implementation to achieve the training outcome you are after.

Note that the below guidelines are here to offer coaches and athletes loose recommendations for programming, and are the only way to program them.

To Improve Core Strength and Muscle

When programming Russian twists for core strength, it’s important to use some form of external resistance to stress the muscles of the core, like holding a dumbbell or kettlebell. You can also use tempo training to increase the time under tension.

Start by performing 3-4 sets of 10-15 repetitions, resting 60-90 seconds between, with additional loading as needed.

To build rotational power using the Russian twist, you need to work on moving faster during the twist. Adding load is a great way to increase power output, however the loads need to be lighter so that they do not distort your movement or slow you down.

A light weight held in the hands is enough to stimulate the nervous system to increase power generation without being heavy enough to slow down your cadence.

When looking to increase core endurance, you need to train in higher rep ranges and for longer durations. That said, using light weights during sets can also be beneficial as the core is often under stress for prolonged periods of time during training, so adding light loads can be another way to progress your endurance.

Start by performing 2-3 sets of 15-20 repetitions, or do timed sets lasting 45-90 seconds. Aim to increase total duration or reps performed over time.

Whether you are looking to upgrade your training or find some modifications, the below three variations can help you reap many of the same benefits provided by the Russian twist, and maybe a few more.

Performing Russian twists with cables is a great way to add variety to your training. By attacking the muscle via different loading parameters, you are able to provide a more novel stimulus. Lastly, cables place consistent loading throughout the entire range of motion, making it a potentially more effective loading scheme than simply holding a weight in the hands.

Doing Russian twists while on a decline bench increases the range of motion of the movement. By opening the hip angle more, the abdominals and obliques must work overtime to support and stabilize both the ribcage and pelvis.

If you are looking to increase rotation power, you can add a ballistic element by slamming a medicine ball at the end of each repetition. The key is to keep the hips planted and square, and to make sure you are not using too heavy of a load such that it distorts the technique.

If you find the Russian twist is not your flavor, there are other exercises available that challenge your core in a similar fashion to help develop strength, power, or hypertrophy.

The Landmine rotation is a rotational exercise that can be done standing or kneeling with a barbell in hand. This is a more complex rotation exercise, as you have to integrate more upper body movement, making it devilishly effective as part of a total-body workout plan.

Cable wood choppers are another complex rotational exercise that mimics more real-life situations such as swinging a baseball bat or golf club. These also allow for a greater range of motion, which can help increase muscle activity.

If you’re interested in targeting the obliques during your ab routine while also getting some spine control training in, performing a standing side bend is a solid choice. The side bend takes some of the pelvic stability demands out of the equation, allowing for straightforward loading of the target musculature without the need for full-body tension at all times.

The Russian twist is more than just another core exercise. It offers coaches and lifters an exercise that can be progressed and regressed easily based on various abilities and goals. Additionally, it is a great addition to any workout program, whether for novices or veterans, as it can be done without weight or with some external loading.

Any well-designed core workout should include at least one anti-rotational exercise, and the Russian twist is second to none when it comes to both convenience and versatility. Whether you’re trying to build muscle, blast fat away, or construct a rock-solid foundation, the Russian twist deserves a place in your plan.

The Russian twist is a classic core exercise that can be done by most levels of lifters, however some questions do pop up from time to time regarding technique and programming. Let’s discuss some of the most common questions about the Russian twist to gain more clarity on this exercise.

Are Russian twists safe on the lower back?

Generally speaking, the Russian twist is a safe lower back exercise when done correctly, however some lifters may find it can be jarring if they do not pay close attention to staying controlled with the movement. If you find it hurts your lower back, consider some of the Russian twist alternatives listed above, which offer many of the same benefits.

How do you modify the Russian twist?

You can modify the Russian twist a few ways. To regress the movement, you can keep your feet on the floor, which will give greater stability. You can also restrict the degree of the twists, or just do a few twists and hold the end positions longer to build up isometric strength.

Yes and no — the twist is a great exercise for stimulating the musculature of the core, and no muscle can be seen if it isn’t grown in the first place. However, the popular phrase “abs are made in the kitchen” still holds true. If you want six-pack abs, make sure you’re controlling calories and adhering to a diet plan.