The Importance of LGBTQ+ Visibility in Professional Strength Sports

Growing up in a heteronormative society is not easy for LGBTQ+ youth. From a young age, we are taught that being straight is “normal” and that’s it. We constantly see heterosexual relationships on TV and movies. We see praise for heterosexual celebrities when they marry. And we are constantly told that proud gay/lesbian couples who show their affection to one another are “sexually perverted” or pushing an agenda.

[Related: Listen to our podcast with strongman Rob Kearney.]

When I came out as a gay man on October 20, 2014, at the age of 22 years old, I never realized what it would do to me as a person and my career as a professional strongman. To me, I was finally living my life as authentically as possible. No more hiding, no more pretending and no more faking a smile. I was able to be myself, be happy and FINALLY realize what true love is.

Leading up to @theworldsstrongestman this year, I was debating whether I should do the rainbow Mohawk. I didn’t know if would be seen as “too much” or obnoxious. When @worlds_gayest_strongman and I realized #WSM was during #pride month, I knew I had to do it. 🌈 🌈 🌈 🌈 #Pride is about being true to yourself, regardless of what other people think. Pride is about love, acceptance and peace. Pride is about celebrating the achievements of the community as a whole and remember those who fought so hard for the rights we have today. 🌈 🌈 🌈 🌈 This is why I wear the fun spandex…. this is why I color my hair… because I am PROUD!! 🌈 🏳️‍🌈 🌈 🏳️‍🌈 @worlds_gayest_strongman #kearneypower #gay #gayathlete #gayjock #gayfollow #gaystrongman #gaymuscle #gayscruff #scruff #gaymen #gayhunk #instagay #gayboy #gaylife #gaypride #gaystrength #gayfit #gayabs #gayfollow #instamuscleboy #husbands #gaylove #instagood #barebeef #gayfitfamous #breakthestereotype #studmuffinsdaily #gaystud #gaylove #gaycrossfit

Making the proclamation, “I am gay” scared me. I was afraid of what my competitors in strongman would think. I was afraid of the reactions I would get from friends, family and the rest of the world. Fortunately, strongman is an amazing community of athletes who support each other in life and coming out has only made my relationships with my competitors stronger than ever.

Of course, I received PLENTY of hate mail after coming out, and to this day, still receive messages/comments on a daily basis saying I am a disgrace to humanity, I would be better off dead, or that my love and marriage with my husband doesn’t count for anything. I have read it all, heard it all and seen it all, but it does not get me down. It motivates me to succeed even more, because to me, there is no bigger F%*@ You to those people than me winning.

Professional athletes are looked to as some of the most influential people in the world. Money, fame and power all come with the job along with the importance of performing your sport at an incredibly high level. Sports give people a voice. Sports give people purpose and meaning. Now, I understand strongman isn’t exactly a main-stream sport, but I am the only openly gay man competing at the professional level of arguably the most hyper-masculine sport in the world. Gay men are often thought to be feminine, soft, weak, unathletic with the inability to be strong, masculine, powerful and courageous.

These stereotypes placed on gay men and other members of the LGBTQ+ community are what makes visibility in professional sports so important.

When LGBTQ+ athletes come out and no longer hide in the shadows, it does more than just allow them to (publicly) be who they’ve always been. When kids are growing up, and they find role models in athletes, they automatically think “I want to be like them when I grow up”. LGBTQ+ youth don’t get that luxury, because they grow up not seeing anyone like them. It engulfs these children in doubt and shame because they feel that they can never excel in any athletic arena.

To them, if they can’t see anyone openly LGBTQ+, it makes their dream seem impossible. Speaking from experience, I have received hundred of messages from LGBTQ+ youth (both out and closeted), about the impact I have had on their lives, simply because I am a proud gay man and I do not hide that whatsoever. I have had messages from young boys/girls saying that because of my presence on social media, it has helped them when dealing with suicidal thoughts and encouraged them to look past the struggles of today and hope for a brighter tomorrow. I have had parents of LGBTQ+ youth thanking me, because seeing me succeed has given them the strength to accept their child.

LGBTQ+ youth are at risk of sucicide, bullying, homelessness and drug addiction. This is not because of what some refer to as “the LGBTQ+ lifestyle choice”; it is because LGBTQ+ individuals are constantly ridiculed for who they are and who they love. LGBTQ+ individuals are constantly told that their life is not as important as their heterosexual counterparts. LGBTQ+ youth are abandoned by their families and left on the streets to fend for themselves because they want to live their truth.

Now I’m not saying by being an openly gay man, I can fix all of the worlds problems and stop all of these injustices from occurring. But, if I can save one child from committing suicide, if I can give the motivation to one child to not be afraid, if I can show LGBTQ+ youth all over the world, that no matter who you love, sexual orientation will not stop you from achieving your goals, then everything I have done to this point is worth it.

Every time I speak to a group of students, I always like to leave them with a few words of advice and motivation. The first, a quote I have lived by since first going to Worlds Strongest Man in 2017, “Train to be the person they said you would never become”. Throughout my career I was told I was never going to be strong enough, big enough or have the motivation to get to the top level of the sport in Strongman. I used that negative energy to prove every single person who ever doubted me, wrong. The second, “Always be proud, never be scared”.

Everyone should be kind, be loving and support each other, because that is when amazing things can happen.

If you or anyone you know are struggling with depression or thoughts of suicide, the National Suicide Prevention Hotline is available 24 hours a day at 1-800-273-8255 as well as online. 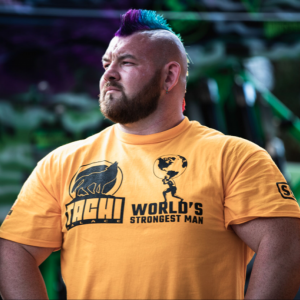 Rob Kearney is an American Professional Strongman as well as the first and only openly gay professional strongman in the world. He began his professional career in the 231lb (105kg) from 2009-2016. Rob decided to compete in the Heavyweight class where he took 1st place in the 2016 Log Lift World Championships and has gone on to compete at Worlds Strongest Man, The Arnold Strongman Classic and currently holds the American Log Press Record of 476lbs (215.8kg)Along with Strongman, Rob and his Husband Joey have become advocates for the LGBTQ+ community especially in the world of fitness and strength sports. Together, they hope to Break the Stereotype of how the LGBTQ+ community is perceived and show the world that regardless of your sexual orientation or gender identity you can be strong and follow your passion of lifting heavy!

CrossFit Games Veterans Weigh In on This Year’s Virtual Competition

No Crowd, No Competitors: The Virtual CrossFit Games Is a Mental Challenge