Could Weight Distribution Be the Reason You’re Missing Olympic Lifts?

Weightlifting technique is built off of cause and effect principles. Very simply put, when you push down, things move up. You push forwards, things move backwards. Unfortunately, we lose sight of basic physiological and biomechanical principles and become married to cues and ideas with no true validation behind them.

The main culprit of that tends to be weight distribution.

Weight distribution has become my focal point as a coach and lifter over the years. What I have found is that the most effective way to correct a myriad of technical flaws in the lifts is by adjusting where the foot is applying pressure into the floor. Conversely, it also means that many technical flaws in the lifts are caused by incorrect weight distribution and the inability for someone to correctly apply force into the ground to:

I spent years as a novice lifter trying to figure out why I jumped forward, jumped backwards, made excessive hip contact without fully extending my knees, collapsed my chest during squats, shot my hips out while catching a clean, had difficulty performing “paused” reps, had bar-swing, had an early arm bend, etc., and the list goes on.

For years, I spent hours and hours performing drills I watched on the internet attempting to correct each problem individually, and listening to the coaching cues of top level coaches as they yelled “HEELS!, STAY BACK!” to their lifters on the platform. As I started coaching more, I ran into the same problem. Prescribing drills and shouting cues with no avail. It occurred to me that I had no idea how to fix these issues.

Something was fundamentally wrong with the movement, but the only thing we paid attention to was the outcome. The effect. So I decided to search for the cause.

Why Weight Distribution Is So Important

99% of weightlifting happens when the barbell is front of the lifter. The only time we have the barbell over the center of gravity is when we are overhead or back squatting. So, it is ESSENTIAL to have some pressure towards the front of the foot when moving. So often, I work with athletes who have been taught to eliminate all pressure on the toes, and to stay into the heels as much as possible in order to keep from being pulled forward.

Considering cause and effect, this makes no sense. The weight is attempting to pull you forward, similar to having a force applied to your back, pushing you forward. In order to counteract that force, you have to be able to push into the floor. This is virtually impossible to do without your whole foot applying pressure into the ground.

Don’t believe me? Try it. (You’ll need a partner)

1. Stand Up.
2. Shift your weight back to your heels and lift your toes off of the ground.
3. Have someone push you in the back attempting to push you forward.

Were you able to resist without putting your toes down or falling forward?

Chances are, the first thing you did was put your toes down and use the whole foot to apply pressure to the ground in an attempt to resist the force pushing you forward.

Try it again, but this time do this.

1. Shift your weight forward until you feel your toes grab at the ground.
2. Unlock your knees to flatten out your foot.
3. Have someone push you in the back attempting to push you forward.

Were you able to resist more effectively?

This is indicative of applying pressure to create a cause that results in the intended effect. This example is especially similar to the jerk dip and drive, as lifters fanatically attempt to keep the weight in the heels, but inevitably dip into their toes because of it.

As we go through some very common technical errors, I will attempt to justify why you should be balanced through the middle of the foot, using the whole foot to apply force, and maximizing the pressure you can put into the floor.

A very popular way of instructing an athlete into a squat is to “get your weight in your heels and sit back like you are sitting in a chair.”

Why this is incorrect is because in weightlifting, it is essential that we keep as MUCH of our body underneath the barbell as possible. By shifting our weight back and removing our hips from under the barbell, we become an inefficient squatter, resembling a folding chair or taco, whichever you prefer.

This is especially essential in the transition to the squat in the snatch and clean. If the weight is shifted to the heels to move under the barbell, the effect is an inevitable shooting backwards of the hips, taking away resistance and stability of the barbell as it lands on our shoulders or overhead.

Instead, center the weight behind the ball of the foot and drive your knees through the barbell.  Now you will be in position to use your whole foot to push against the ground, instead of ½ of it, maximizing the amount of pressure in the correct direction. All while keeping as much body under the barbell as possible.

Weight Distribution Throughout the Lifts

Many common errors in the snatch and clean are product of getting behind the bar too early and pulling the body away from the barbell, which causes many other issues (arm bending, a looping bar path, jumping backwards, etc).

💥Snatches were on today! 130kg ➡️150kg (330 lbs), 155❌ #SabStrong @eastcoastgoldwl • Despite my best competition Snatch being 157kg, I never hit anything bigger than around 145kg in training. Came in ready get something done and @bmcd83 stoked the fire🔥. Beyond excited to have these weights on the bar right now, deep in a rough training cycle.

Many of these cannot be fixed with a drill. The fundamental flaw lies in the weight distribution. When your weight is in your heels, you are a puller, rather than a pusher, making it very challenging to keep your chest over the bar long enough to get a vertical drive at the top. So, while the “effect” may be a looping bar path, it’s not because you aren’t attempting to drive it vertically. You just physically can’t because your torso and head is already behind the bar.

It can be evident early on in the set-up, before the lift even begins when the lifter will gets into their start position, sits back so the shins are vertical, lifts the toes up, and gets all the weight into the heels. First thing that happens: shoulders come flying back, which is setting you up for disaster later in the lift.

This is where I see the most issues due to improper weight distribution. It is very evident when a lifter drives the bar forward, and you hear things like “getting into your heels” becoming “the way to do it.” Makes sense superficially, don’t want to move forward? Go backwards.

Unfortunately, like anything else at one extreme, the only direction to go is in the opposite. By having all the weight in the heels the instant the lifter decides to put effort into the ground to resist the barbell in the dip, or to drive the barbell upwards, then they will inevitably push into their toes.

I chuckle every time I hear a coach yelling at the lifter to stay back and get in their heels, and watch the lifter drive the bar forward and run underneath it with a confused look on their face. “I stayed on my heels, coach and it still happened, I don’t get it!”

You may have noticed that most of this discussion is arguing the benefit for NOT being so heel-heavy in our lifts. As stated before, extreme in any direction is less than beneficial. So, having TOO much pressure towards the front of the foot is not desired and will lead to the exact opposite effect, which is Jumping backwards, shifting the weight back into the heels as you transition to drive the bar, pulling you forward during the lift, and pushing you forward during the jerk.

The goal is to find the middle of your foot, which is the place where you can maximize pressure into the floor and create a stable body position that allows for you to be as solid as a rock under load, and during movement.

I encourage experimentation: They say there is no sound without silence.

If anything else, experimentation gives you an opportunity to compare the feelings of each position, so you can adjust accordingly. Without knowledge of what these positions feel like, then making adjustments in your lifts is like playing darts blindfolded. You may hit the bullseye, but not because you meant to. 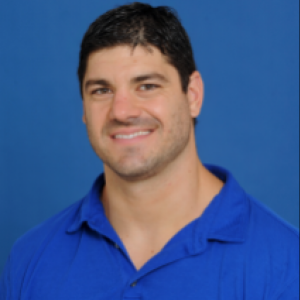 Phil is the President and Associate Head Coach of East Coast Gold Weightlifting, one of the largest and most successful teams in the U.S. He holds a Master's Degree in Sports Sciences, and is a Lecturer at Old Dominion University. Phil is also a Nationally top-ranked Weightlifter in the 94kg class, and is a former National Champion, American Open Champion, and 3x Team USA member.

1 thought on “Could Weight Distribution Be the Reason You’re Missing Olympic Lifts?”

Fergus Crawley: A Hybrid Athlete For a Greater Cause