When things are decidedly a little FUBAR in my life, like when there’s 25 days before I blindly travel around the world for a year with a bunch of strangers and yet I still haven’t packed, I find that the most logical thing to do is bury myself in the depths of old school World’s Strongest Man competitions on YouTube. Clearly, I could actually get my life together, but experiencing the glory of the 1970s through a 640 x 480 frame creates far less anxiety. 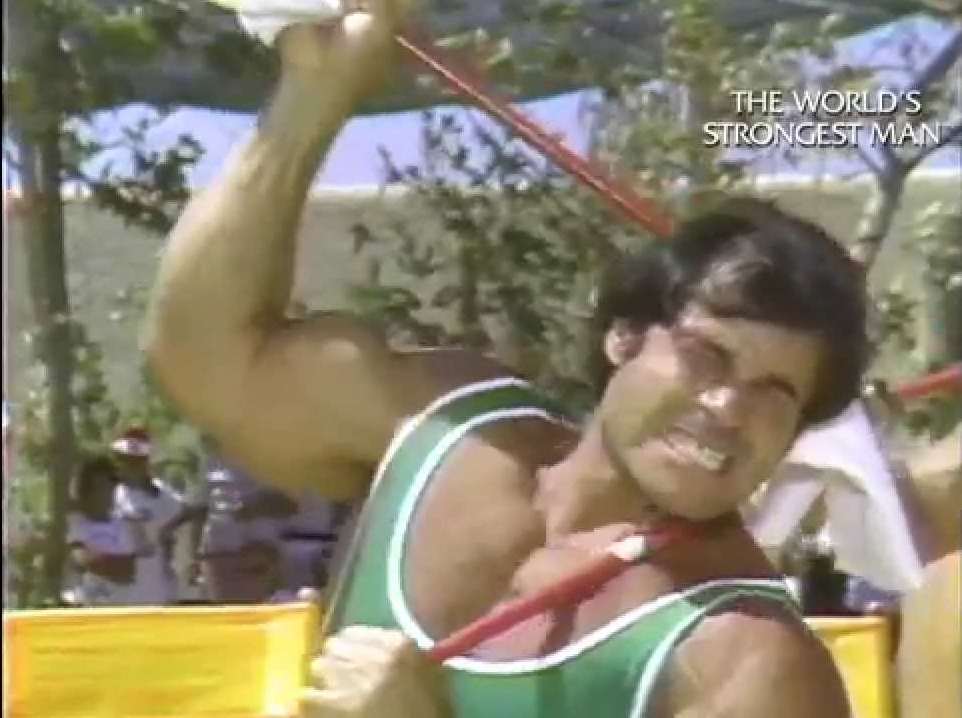 According to my YouTube research, the 70s were awesome. Nadia Comaneci scored the first Perfect 10 in the Olympics,”Dancing Queen” was born, and incorporating Mork and Mindy into a conversation was an acceptable thing to do. Also, cocktail weenies and SPAM.

Ok, I’m getting a little off track. Blame the canned meat. The 70s also gave birth to one of the greatest strength competitions ever: the 1977 World’s Strongest Man.

Forget what you know about today’s World Strongest Man. The first ever World’s Strongest Man, held at Universal Studios, hardly resembles today’s modern strongman competitions. While WSM was developed in part to find the World’s Strongest Man (at least on that particular day), it was mostly developed for entertainment and designed to be a “friendly display of strength by invited athletes from several sports — e.g., powerlifting, weightlifting, bodybuilding, American football, wrestling, shot putting, and arm wrestling.” Even the great Paul Anderson showed up to support!

Though each of the eight men chosen to compete had reached success at the top of their respective sports, none of the competitors chosen to compete in the inaugural World’s Strongest Man had ever trained to become the World’s Strongest Man, which meant that there was no strategy, no practice runs, and no expectations. Just show up, suck it up, and lift heavy shit. Singlets and grunting optional, but highly encouraged.

The competition consisted of 10 events, ranging from feats of pure strength to those that required endurance or technique. Safety measures were poor and standards virtually nonexistent, which meant it was all the more entertaining. The 90 minute broadcast is worth the watch, but assuming that you’re actively taking care of your life instead of avoiding responsibility, you need the event highlights.

Don’t worry, I’m here to help. Grab a can of SPAM and enjoy the gloriousness of each event, in the order they were competed.

Barrel Lift — clean and press a two foot wide barrel filled with water. Competitors were required to pause with the barrel at the chest and above the head, but Jon Cole just said “screw it” and muscle cleaned the thing. He lost. Bruce Wilhelm won the event with a 250lb barrel.

Bar Bend (hey, that’s us!) — bend a steel rod in half, by any means necessary. The bars became increasingly thicker as the event went on, and using your neck and mouth was totally legit. Enough of this “Fran” nonsense, let’s get a good old fashioned Bar Bend in the CrossFit Games and see if anyone can beat Lou Ferrigno.

Wrist Roll — Hoist 100lbs up a 10ft rope. I imagine this event was invented after someone got high and went to a carnival. (It was the 70s, after all…this is a totally valid assumption.) Winner: Mike Dayton

Tire Toss — Surprisingly, Bruce Wilhelm the Shot Putter and George Frenn the Hammer Thrower lost the Tire Toss to the Ken Patera the Wrestler. Then Wilhelm and Patera had a very polite smackdown, with such harsh words as “let’s hope your insurance policy is all paid up!”

Tram Pull — Halfway through! Time to pull a 8000lb vehicle 40 yards. Wilhelm demolishes Franco and makes sure to focus on the “superiority of the big man over all the bodybuilders and powerlifters” in his post victory interview.

Car Deadlift — Grasping the bumper of the car, either front facing, the competitors had to lift the car up high enough for the judges to see under it. It’s unclear how the make and model of the cars were chosen, but thank God someone remembered to paint at least one car puke green. Sadly, George Frenn injured himself on his second car deadlift attempt and withdrew from the competition. Ferrigno, who is so large he looks like he couldn’t even fit in the driver’s seat, won the event.

Girl Squat — No televised 1970s experience would be complete without something sexist. In WSM’s case, the obvious choice was to put some girls in a cage and have the men squat them. There’s a sentence I never thought I’d write. Bob Young and his 22″ neck took this title.

Refrigerator Race – What could be more natural than strapping a 410lb refrigerator to your back and going for a jog? In yet another event where someone was probably inebriated during conception, the Refrigerator Race resulted in a gruesome injury that lead to the downward spiral of bodybuilder Franco Columbu’s career. Ten or so yards into the race, Columbu’s leg dislocated in a way that can only be akin to a bendy straw. For the squeemish types, watch at your own risk…though Columbu himself later states, “The biggest problem is…uncomfortable…but not too much pain you know?”

There was no sympathy from Wilhelm, the event winner, who went as far to say “I’m in shape. The rest of these guys are not. Bodybuilders aren’t in shape for this kind of stuff.” Classy guy.

Tug-of-War — Obviously, after a long day of strength and catastrophic injury, the only choice for the final event is to get some “man on man” action, as Paul Anderson put it. A real tug of war: two minutes to pull your opponent past the line. Wilhelm and Patera continued their smack talk, and the great Tommy Kono set them off.

In the end, Bruce Wilhelm was named the first ever World’s Strongest Man, and he would return the following year to successfully defend his title. But, the biggest thing we learned is that white guy afros and old school singlets need to make a comeback, and that one should never run whist carrying a refrigerator. What a glorious decade!