American-Russian Weightlifting Relations Strengthened in Lead Up to Anaheim

USA Weightlifting (USAW) and the International Weightlifting Federation (IWF) have begun to finalize plans for the 2017 World Championships, which will be held November 28th through December 5th of this year in Anaheim, California.

Earlier this month, a walk-through of the venue and surrounding areas of the competition was conducted by USAW and the IWF. Also visiting the competition site and staying at the main hotel for athletes was Maxim Agapitov, the recently elected President of the Russian Weightlifting Federation. Agapitov and USAW CEO Phil Andrews met to discuss cooperation between the two federations going forward. 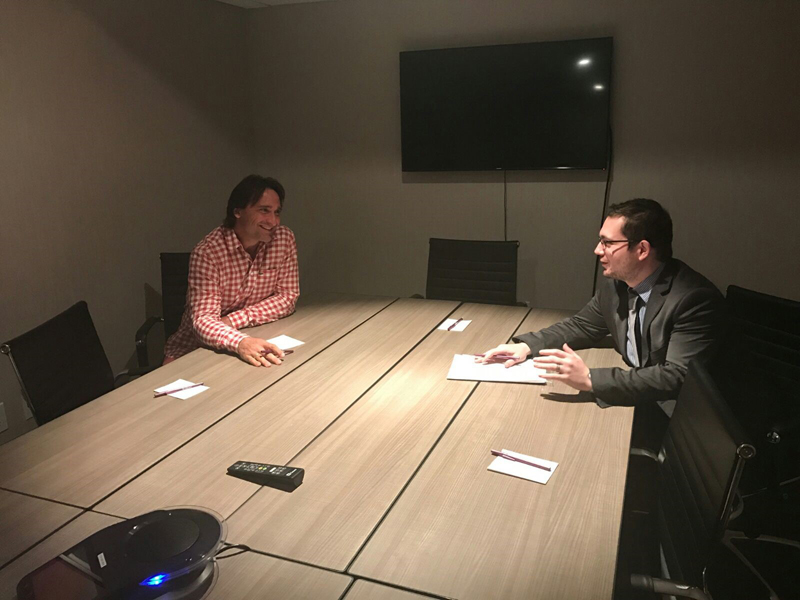 Topics of discussion included potential opportunities like sponsorship agreements, coaching education, athlete development and training opportunities, and working toward greater transparency in the workings of both federations.

President Agapitov was supportive of the venue and facilities provided by USA Weightlifting and Sports Anaheim for this year’s World Championship. He told USAW media that “a great venue for the World Championships has been chosen.”

One of Agapitov’s top priorities since assuming his new role has been to resolve doping issues. Russian weightlifters were prohibited from competing at the 2016 Rio Olympics following publication of the McLaren Report, as well as the advice of the International Olympic Committee (IOC) and re-analysis of Beijing 2008 and London 2012 samples, along with four failed drug tests from the 2015 World Championships.

According to the International Weightlifting Federation (IWF), “national federations confirmed to have produced three or more anti-doping rule violations in the combined re-analysis process of the 2008 and 2012 Olympic Games shall be suspended for one year.”

Armenia, Azerbaijan, China, Belarus, Kazakhstan, Turkey, and Russia are currently facing one-year bans from competition after each accrued three or more positive retests from the 2008 and 2012 Olympic Games. However, the IWF hasn’t released much additional info regarding such penalties.

Russia was the only country from the group above to have weightlifters banned from competing in the 2016 Olympic Games. This official announcement was published on July 24, 2016, by the International Olympic Committee (IOC), which some assumed indicated the start of the one-year ban. If that is the case, then the Russian Federation can be expected to field their top level athletes in Anaheim.

As of right now, Russia has entered their top athletes into the European Championships to be held in April of this year.

In January of this year, Russia dropped their appeal over the one year ban in the International Court of Arbitration for Sport (CAS). As per an article by Inside the Games, Agapitov met with IWF president Dr. Tamas Ajan, and promised he would work with the IWF to clear up the sport in Russia.

As recently as March 10th, Agapitov said he feels the one year ban will be overturned. He told Inside the Games that Russia’s new anti-doping program would be “an example others could follow.”

The IWF is scheduled to discuss all further sanctions during an Executive Board meeting that is scheduled to occur April 1st and 2nd in Bangkok, Thailand, on the eve of the Youth World Championships. As per the March 10th article from Inside the Games, Agapitov has asked to attend so he can make his case to the leadership of the IWF. He claims that the Russian Weightlifting Federation has “used this as an opportunity to learn, to grow and to make changes for the better.” It is possible that further details on the fate of international competition for Russian Weightlifting, and the six other countries, will be released at that time.

In meeting with Agapitov, USAW CEO Phil Andrews stated, “We look forward to continuing to support the new administration of the Russian Weightlifting Federation as they seek to participate in our sport in a transparent, clean fashion. Russia is a great asset to the sport of Weightlifting.”

USA Weightlifting has confirmed that Andrews plans to reconvene talks with Agapitov on the weightlifting relations of both countries in May when he travels to Russia for a meeting. Also in May, the IWF will host an electoral college, where every member country will send two delegates to cast a vote for candidates to the Executive Board. The Russian Federation has nominated Agapitov for 1st Vice President of the IWF. USAW previously announced they will support the candidacy of President Ursula Papandrea in the election.

Did you know the 2017 World Weightlifting Championships is coming to America this November? BarBend partner USA Weightlifting is hosting the world’s top weightlifters for 2017’s premiere international weightlifting competition. Help support the sport and reserve your spot by booking tickets today through USAW, and learn more about our partnership here.