In just a few short weeks, Columbus, Ohio will play host to the largest gathering of strength sport athletes on the planet. Everyone who considers themselves a serious weight training fan or athlete knows about the spectacle of the of the Arnold Sports Festival and craves the outcome of multiple world class contests. For the strongman aficionado, this year is bigger and more amazing than ever. 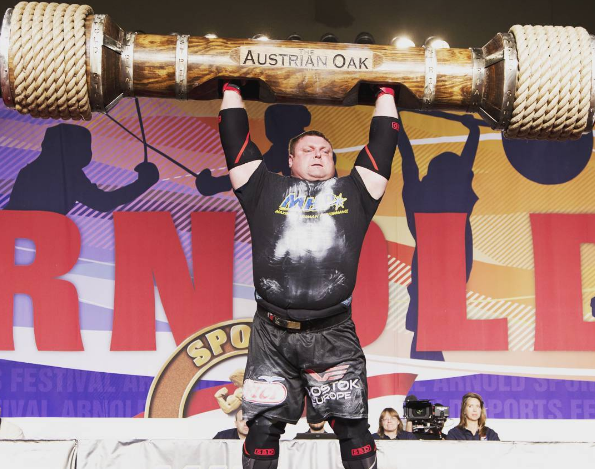 The event that started it all, The Arnold Strongman Classic, is now the crown jewel in the Arnold Pro Strongman World Series. An invitation only event that is the heaviest contest on the planet will take center stage Friday, March 3 at 3:30. Last year’s champion, Zydrunas Savickas (Lithuania), looks to defend his title against Brian Shaw (USA), Hafthor Bjornsson (Iceland), Krzysztof Radzikowski (Poland), last year’s amateur world champ Zach Hadge (USA), and a field full of stacked athletes. More action will follow Saturday at 1:30 and the finals will be held that night for ticket holders at 7PM.

A completely different style than the World’s Strongest Man Contest is presented in Ohio. The mind-blowing weights shift the athlete’s focus to pure limit strength rather than physical conditioning and athleticism. Many consider the victor of this event to be the strongest man on the planet, and it is easily the most live viewed contest of the year. If you plan on watching, work your way to the stage early, as this standing room only event will be a few thousand people deep by the start.

Not to be outdone, the new class of professional women will kick off the inaugural Arnold Pro Strongwoman contest Saturday morning with the preliminaries starting at 10 AM and then moving to the Rogue Strength Stage for the finals at 2 PM. This contest is host to ten women from all three weight classes and is an earn your way in event. Using a similar format to the men’s contest, the athletes will face off  in grueling tests of strength including the circus dumbbell, deadlift, and crowd favorite; the stones. With a minimum $10,000 payout, you will see motivated athletes on top of their game including Kimberly Lawrance, Kaitlin Burgess, and Brittany Cornelius. Personally, I am looking forward to seeing what the last year of training has done for this new class and expect some world class efforts.

Mike Jenkins (USA), Adam Scherr (USA and WWE superstar), Donna Moore (UK), Mikhail Shivlyakov (Russia), and Mateusz Kieliszkowski (Poland) are all past winners of the Arnold Amateur World Championships and now household names in the strongman world. Athletes looking to get to the big leagues often prep all season long for a shot at winning the event, and with over 175 athletes this year, a star is certain to be born. All corners of the globe will be represented at this event that takes place on Friday starting at 10AM.

Because strongman is the most athletic sport on the planet — in my opinion — the male and female strongman athletes are one of the Arnold’s highlights. At this level, you must possess strength, power, speed, technique, and an abundance of anaerobic endurance or you won’t make the cut! The finals hit the main stage on Sunday at 1:30 PM.

In the strongman world, the athletes know very few limits. Competitors of all sizes are well represented at every contest. Now, for the first time at the Arnold, Strongman Corporation will host the 2017 Strongest Disabled Man contest. On Sunday starting at 10 AM, athletes who face different obstacles in their daily routine will have the opportunity to push, pull and lift for a crowd of thousands.

The modified events like stones, overhead press, and timed hold will determine this champion and will be a great contest for the fans of the sport. I attended this contest in 2015 at a smaller venue in Ohio and was thoroughly impressed with the quality of lifting exhibited. This event rounds out the largest gathering of Strongmen on the planet.

Make sure to take in as much of each event that you can. The variety of what is offered is unparalleled and can motivate you to train harder or to go out and support your local contests. The entire convention is a crazy setting of like minded people from the world over, and new friends await the camaraderie that strength sports bring. See you in Columbus!

Weight training is in the blood of BarBend contributor Mike Gill. Learning how to lift as part of his conditioning for Jr. High School wrestling fueled a passion that has lasted now for 35 years. He has a background in all weight disciplines and has competed in Bodybuilding, Powerlifting and Weightlifting eventually finding his niche and turning professional in the sport of Strongman. Retired from competition, he now focuses on coaching and applying events from the most versatile weight discipline to other sports. His vast knowledge of Strongman has been highlighted in his work as a color commentator for live broadcasts of the Arnold World Championships, National Amateur Championships, World’s Strongest Man Over 40 and World’s Strongest Woman.Not limiting himself to just working with weights, Mike has used his decades of discipline to work as a life coach and speaker. Additionally he can often be seen in New York City as a stand up comic.He can be reached for coaching at Michaelgill100 [at] gmail.com, @prostrongman on Twitter, Snapchat, and Instagram, and on Facebook.