How Sports and Teammates Built My Powerlifting Mindset

Editor’s note: This article is Part Two of a three part series that will share insight into Charles Okpoko’s lifting career. The series will cover Okpoko’s athletic beginnings, his developing and changing mindset, along with what he’s learned under the bar. Read Part 1 here.

There’s a great saying in the Book of Proverbs that goes a little something like this: “As iron sharpens iron, one man sharpens another.” This one quote pretty much sums up my entire lifting career.

My love for weight training began when I started playing football in the 7th grade. Football practice can be broken up into two parts: lifting weights and either cardio, or playing football. I’m going to focus on the weight training portion here. Anyone that’s ever played football, or any other team sport will probably agree with me when I say that the atmosphere within the weight room is unlike anything else.

Everyone is in there pushing themselves and their teammates to their personal limits and beyond, along with the encouragement of the coaches. This energy was greatly amplified when I moved on to play football in high school. At my high school, there was an unspoken hierarchy within the weight room. The lifting platforms were ranked from strongest to weakest. There was a very practical reason for this. From a coaches perspective, it was the most efficient way to get everyone to complete the entire workout with the least amount of weight changes.

However, as you can imagine the athletes didn’t see it the same way. The platform you were placed in was seen as a team ranking system, so the toughest and strongest were at the top, whereas the weakest were at the bottom. Everyone, myself included, had their eyes set on the very top platform, and was going to train as hard as physically possible to claw their way to the top. I don’t remember exactly how far down the ladder I started off, being that I was one of the smallest on the team, but I’ll tell you what, I didn’t stay there for long. 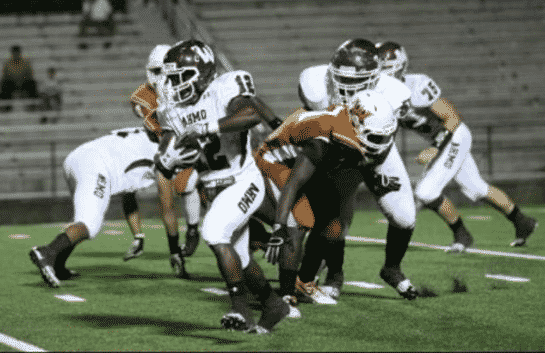 Every time I walked into the weight room, it was time to go to work. I refused to let anyone, regardless of how big they were out work me. The better my teammates got, the better I got, and vice versa. There many times when I didn’t want to finish a rep, a set, or even do my workout at all, but then I looked to my side and I saw someone next to me getting better. That lights a fire inside of me to keep going.

This caused me to climb my way up moving from one platform to the next until I eventually made it to the very top platform. Even when I did make it to the strongest platform I had to keep pushing, because there were other guys just as hungry trying to take my spot.

If I had nobody beside me to push me, then I doubt I would have gotten to this point. The same thing was true for my powerlifting career. I had teammates like Ian Bell, Preston Turner, Mario Leos, Michael Davis, and Aaron Pomerantz pushing me every day when I walked into the Longhorn Powerlifting practice.

They set the bar high, and I strived to get just as strong, if not, stronger than they were. My experience has shown me that healthy competition often brings about the greatest progress in athletes. If the athlete has the right mindset to rise to the challenge, then they’ll have the natural capabilities to build a strong lifting mindset.