How to Get Better at Olympic Weightlifting

Olympic weightlifting is not something people naturally pick up and find great success at on a regular basis. While it is true that some gifted lifters may transition/get started very easily into the formal competition lifts (snatch and clean and jerk), the harsh reality is most beginners and newcomers (as well as lifters who have been training but have failed to continue to progress past the initial surge of success) may not be doing everything they should to truly advanced one’s lifting.

As an active weightlifter (active in sense that I am compete in local and soon to be national events, multiple times per year) and USA Weightlifting Club coach, I have seen (and been victim too) my fair share of do’s and don’ts of weightlifting.

Therefore, in this article, we will go through the 10 things you can start doing to get better at weightlifting (beginners) and progress into more advanced stages of development (do better at local events, qualify for national events, etc).

It is important to note that the below tips and suggestions are based upon my personal experiences and background as a weightlifter and coach. While there may be universal overlap on some aspects, other coaches may differ, which further goes to show there are various perspectives and methods that work!

Many lifters prioritize squatting strength, and rightfully so. Weightlifting places a high demand upon an athlete’s maximal strength, in specific the high bar back squat. Many lifters, however, may opt to sacrifice integrity in the squat (allowing a less vertical torso, hips shooting up out of bottom, etc) so that they nearly do a hybrid low bar/good morning/whatever else will move more weight (same goes for the front squat). Squatting in weightlifting should be used to increase one’s snatch, clean, and jerk, as it is the ultimate strength movement to build a stronger, more forceful base. Without squatting using the same mechanics needed to have a direct correlation to the lifts, your weightlifting (snatch and clean and jerk) performance my stay stagnant even though your squat numbers go up. Bottom line, squat with integrity, then add load.

While some athletes may not be training heavy enough (and in high enough volumes), the majority of beginner and intermediate may find themselves training too heavy (percentage relative to their max) too often, which can negatively impact power output, technique, and increase injury risks.

Most athletes should spend the majority of their training in the 70-85% of maximum for 2-4 repetitions for most snatches, cleans, and jerk variations. Squats can also be used in the same loading with slightly higher rep schemes to allow for increased volume. Lifts over 85+% should also be integrated into one’s program to prepare them for heavier lifts, as technique may breakdown around that point, and therefore should be addressed. 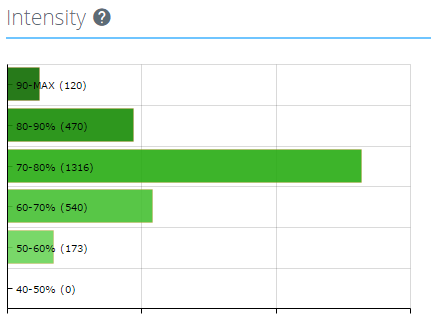 Above is the exact breakdown of the last hypertrophy weightlifting cycle that Union Square Barbell Club and my American Open Series athletes finished last month. As you can see, the majority of the loading was within the 70-85% range, but also included some higher % loading as well.

Going along with the above two tips, having a set program with progressions, regressions, loading schemes, and methodical tracking and analysis (done by the coach) will make a drastic difference in your ability to progress over the course of the next months and years. Performing daily WODs that include weightlifting movements may suffice for the rudimentary lifter, however often fails to address the individual’s specific needs, concerns, and does not provide enough frequency to fully develop the skill and physiological adaptations necessary for the snatch, clean, and jerk.

Learning to develop, harness, and exert maximal tension, aggression, and balance upon a loaded barbell is critical in the setup, various pulling positions, and receiving of the barbell (in the snatch, clean, and/or jerk). Too often lifters fail to harness tension, often resulting in unbalance pulls and set ups that can kickstart a cascade of lifting faults.

The best way to address this, other than seeking out a qualified coach, is to become highly aware of your set ups, receiving positions, control throughout your lifts and strength work.

This hips can often be a culprit for poor movement in the front squat, overhead squat, snatch, clean, and split jerk. Ankle and knee joints aside, the hips (and sound hip tracking) can often result in poor squatting strength, mechanics, and health. Seeing that squatting is vital to weightlifting, lifters should prioritize hip health and movement (as well as all other joints and muscles to maximize performance and injury prevention).

Implementing mobility training, static stretching routines, and controlled range of motion movements can aid in the overall development of joint and connective tissues health and integrity.

6. Train Every Lift, Nearly Every Day

One of the best ways to get better at snatching (as well as cleaning and jerking) is to simply do it more often. Now, this doesn’t mean more bad reps with poor mechanics (as that will actually make you worse, much worse), but rather that once you have addressed faults and established correct movements and technique, performing the movements more frequent (daily versus a lot of reps in one day) will allow your nervous system to adapt and learn more effectively.

By training the lifts more frequently but in smaller doses, you allow the nervous system to have peak focus as well as allow the body to promote the most amounts of force and acceleration (as fatigue mounts, acceleration and force output drop, both of which are necessary for technical mastery).

Varying training intensities on a daily basis will allow you to train more frequently, address specific faults, and fully develop a balanced, healthy lifter. By doing some days at 70-75% of max for technique and speed, and other days at slightly higher intensities (75-85%) for strength speed and power, you are better able to address all the critical components of weightlifting.

8. Seek Out a Qualified Coach

If you have access to a qualified coach at your local gym or even online, I suggest you look into them. Having a trained eye (either in person or training) can do wonders for your technique, mental preparation, and programming, all of which are vital to long term success.

Similar to finding a qualified coach, many training facilities around the globe offer legitimate weightlifting clubs, often sanctioned by large national organizations (such as USA Weightlifting). That certificate of membership is a seal of approval telling you that the coaches and environment has been approached by an governing body, often offering more standardized, safe, and effective weightlifting programs.

Contrary to what some may believe, recording your videos is not a vein or superficial thing to do as a weightlifter. Documenting your lifts on your social media, phone, or even in group forum specializing in weightlifting can be a very helpful training tool. Getting feedback by qualified coaches, visualizing you faults and the specific corrections, and tracking the progress (or lack thereof) can help guide you along your journey.

Becoming better at weightlifting is long, arduous, and rewarding process. While these 10 tips are extremely helpful, they may or may not apply the best to every single lifter. Therefore, athletes and coaches need to use these 10 tips a guidelines and then better individualize the lifter’s need and goals to promote optimal performance.