Hip Thrust Vs. Back Squat for Glute Development

The back squat and hip thrust are both great lower body training options, but which is best for glute training?

Glute development is key for strength, power, and fitness athletes, everyday individuals, and aesthetics. When looking to increase glute hypertrophy and strength, some lifters will suggest that performing squats alone can be sufficient. We set out to determine which movement – the hip thrust or the squat – is best for glute development.

In this article we will take a deeper look at the hip thrust, the squat, and which one is best for glute development:

The hip thrust is a highly effective glute exercise that is often used to develop hip extension performance, glute activation, and improve hip power and strength. Many strength, power, and fitness athletes will use the hip thrusts within training programs, using them as supplemental movements to build a strong squat, deadlift, and improve glute development.

Be sure to take a look at our Hip Thrust Guide to gain a deeper understanding regarding hip thrusts and their benefits.

1.
Place the loaded bar in the hip crease.

Once you have assumed a flexed hip position, secure the barbell in the hip crease so that your back is flat and flexed, with the feet pushing downwards into the heels, with bent knees.

Coach’s Tip: Your knee joints should be about 90 degrees. This will help increase stability.

2.
Stabilize the upper back on the bench.

Place your upper back onto the bench, so that your body is perpendicular to the bench angle.

The shoulderblades should be pushing into the bench, with the head and upper back on the bench, or slightly behind the bench.

Coach’s Tip: At the top of the hip thrust, you should be able to lift your hips upwards so that the torso is parallel to the floor. If you feel like you cannot, you may also need to readjust your positioning on the bench/upper back.

3.
Press through the heels and lift the hips.

Once you are set, pull the belly tight and keep the back flat. Often, lifters will arch the lower back and miss-load the hips at the bottom of the position.

Lock your torso in so that the hips move up and down almost as if your torso as a crowbar/level. There should be no instability across the core when performing this movement.

Coach’s Tip: Keep your abs tight and pinch you glutes together as you lift. Avoid arching your back.

The hip thrust is a hip dominant movement that can be used to increase glute and hamstring strength. Below are the main muscle groups used during the hip thrust:

Note, the hamstrings assist in the hip thrust movement as they aid in the hip extension.

The squat is one of the most foundational movements an athlete can do to build muscle mass, strength, and train movements specific to daily life and sport. There are a wide array of squat variations that are seen across power, strength, and fitness sports; all of them offering unique benefits for leg, back, and glute development.

Be sure to take a look at our Ultimate Squat Guide to gain a deeper understanding regarding squats and their benefits.

Start by stepping under a barbell (supported in a rack). This step is key as it is your chance to properly engage the upper back (step 2), set a firm foundation with the core, and mentally prepare for the un-racking of the barbell.

While you will need to step out of the rack to set your feet up for the squat, it is recommended that you place your feet in the squat stance, or slightly narrower, as you want to think about “squatting” the load off the rack hooks, rather than stepping in and out with one foot, etc. This is especially the case as the loads get heavier.

Coach’s Tip: This step is significantly important the heavier the loads are. Not not rush this process.

Grip widths will vary, however the key is that you should be able to take a full grip on the barbell, as this will allow you to maximally contract the upper back/traps/forearms to properly secure the barbell in the high-bar squat position. Note, that the barbell should be placed above the traps, or on them, rather than on the rear delts/lower on the back (like the low-bar squat set up).

When doing this, be sure to actively flex your upper back and traps up into the barbell, which will give you some “padding” for the barbell to rest on. Lastly, be careful not to hyper-extend the back as you do this, as many lifters will lose tension and bracing in the core.

Coach’s Tip: Squeeze the bar and find a secure position. Once you have found it, pull the barbell tight into the body so that you and the barbell are now one, massively dense and stable unit.

3.
Step Out and Get Stable

When you are ready, step out of the rack, using either a 2 or 3-step approach (as this is often the best way to minimize barbell movement and conserve energy). The feet should be about hip-width apart, with the toes slightly pointed out. The chest should be held high, with the core and obliques contracted.

Be sure not to have too much of a forward lean, as this high-bar variation should allow you to keep your torso up vertical.

Coach’s Tip: This can be challenging and inconsistent for many beginner and intermediate squatters (the pre-squat routine). Be sure to practice the same set up and walkout techniques every time you squat, as this will help it become more automated (one less thing to worry about).

4.
Pull Yourself Down into the Squat

With the feet planted, and pressure evenly distrusted throughout the foot, slightly push the hips back while simultaneously allowing the knees the bend forwards, tracking over the toes. Keep the upper back locked to minimize forward lean or collapse of the thoracic spine.

Think about gripping the floor with the toes and creating space for the belly between the thighs. Often, the cue “knees out” is used, which can be beneficial for some (however it can also cause excessive bowing of the knees). Regardless, think about pulling your torso straight down so that the abdominals and hip flexors assist in the lower of the movement.

Coach’s Tip: Take your time as you lower yourself into the squat, making sure to feel any weight shifting back/forward or tendencies to collapse the torso.

5.
Squat to Depth, and Stand Up

Squat to the desired depth, which for many is at parallel or below. Once you have assumed the desired depth, push your back upwards into the bar while simultaneously pushing the feet aggressively through the floor, making sure to keep weight in the heels (and toes). As you stand, continue to keep the chest high and core locked.

Be sure to keep your spine locked into position, and your heels down on the ground. A general rule of thumb when assessing high-bar squat technique is that the shin angle should be parallel to the spine. If they are to intersect (id you continues those angles) at any point in time, it could indicate excessive forward lean of the torso (horizontal displacement of the barbell, which is not desired).

Coach’s Tip: You should feel your legs (quadriceps) working, as well as the upper back and hips.

The squat is a lower body movement that targets the quadriceps, hamstrings, and glutes. Depending on the style of squat (back vs front, low bar vs high bar, etc) various muscle groups will be targeted to a greater degree than others.

Generally speaking, the high-bar and front squat variations target the:

The low-bar back squat shifts the weight lower on the back, which shifts more loading to the:

What the Research Says…

Research on the hip thrust vs the squat exists, making it a great place to start when dissecting this common glute training question. Below are some of the research findings:

In the below section we will discuss the differences between the hip thrust and three (3) squat variations commonly used in strength, power, and fitness sports.

Hip Thrust Vs. High-Bar Back Squat 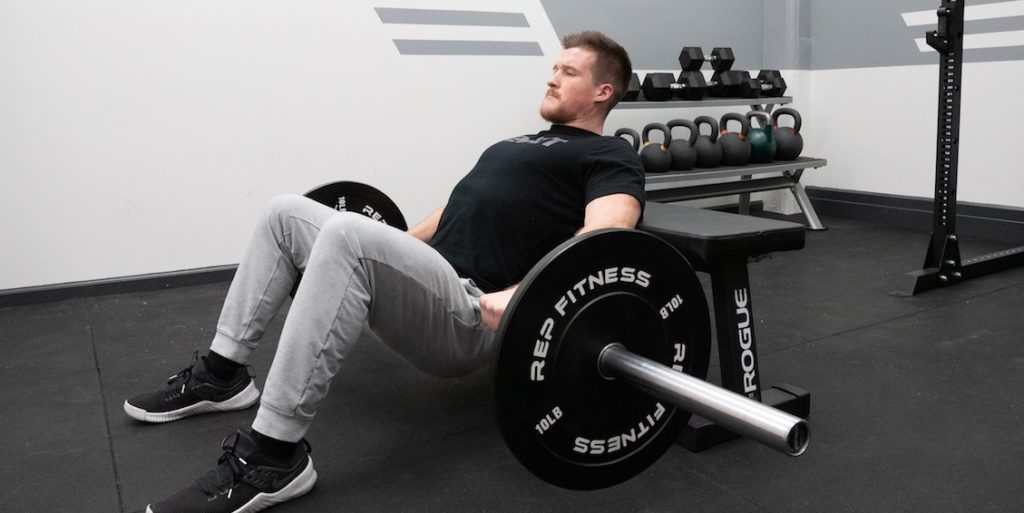 Hip Thrust Vs. Low-Bar Back Squat

The low-bar back squat is more hip dominant than most other squat variations. While the low bar back squat stressed the glutes, the hip thrust is a much more isolated glute exercise as it places minimal loading on the hamstrings and lower back when done correctly.

In the front squat, the lifter reaches high degrees of knee flexion (while still doing into hip flexion as well). The high degrees of knee flexion and upright torso angles often shift greater loading demands on the quadriceps with the glutes being used to assist the final stages of the lift. The shift of the anterior load further increases the quadriceps demands during this squat variation.

The hip thrust is highly depending on hip extension strength with minimal movement at the knee. For this reason, the front squat is not as effective of a movement for glute-specific development. Note, the front squat does build glute strength by default (as do most squats), however they are not viable replacements for direct glute targeting.

Which is the Best for Glute Development?

Answer: If you are looking to specifically target the glutes for growth and strength, then the hip thrust will be the most effective exercise for specifically engaging the glutes when compared to the squat.

This is not to say that squats are not glute builders (because they are), but rather to illuminate the fact the the hip thrust is a highly effective and glute-specific exercise.

For the best results, it is suggested to combine hip thrusts, squat variations, and deadlifting within a training program to maximize overall leg and glute strength and performance.

Looking to beef up those glutes and maximize leg and hip performance? Take a look at our top glute training articles below!