Kos is named after the Greek island where Hippocrates was born and the company sells what they call “small-batch, boutique” protein powder that provides the “ambient glow of radiant health.” Kos’s mission help provide a future for the world, since they believe that the world can’t support its growing population based on animal protein. I tried out their Vanilla-flavored protein; here’s what’s in it.

This meal replacement is nutritious and especially low in allergens, making it useful for a wide variety of consumers.

One serving is two scoops and provides 120 calories: 20 grams of protein, 7 grams of carbohydrates (3 grams of fiber, 2 grams of sugar), and 2.5 grams of fat (no saturated fat).

This is a pretty nutritious protein, containing 40 percent or more of your recommended daily intake of Vitamins A, C, D, several B-vitamins, and iron — the iron content in particular is very notable. However, it’s pretty high in sodium with 18 percent of your daily intake.

Let’s talk about these digestive enzymes first. They come from a company called DigeSEB™ and it’s possible that this collection of enzymes helps to break down food and help you absorb their nutrients more effectively.

The proteins themselves are pretty high quality, and while there’s no discussion of amino acid content on the tub — which is disappointing — the combination of pea, quinoa, flax, pumpkin seed, and chia should result in a complete amino acid profile and potentially some plant-based omega-3 fatty acids.

This is unusually nutritious protein powder as well. In addition to the Vitamins A, B, C, and D mentioned above, there are smaller amounts of selenium and manganese. The real standout here is the 40 percent of your daily iron intake per scoop — a particularly tricky RDI to meet for some people on a plant-based diet — but I would have liked to see some Vitamin B12 here as well. There is just 4 percent of your daily intake.

All the ingredients are organic and non-GMO, plus it’s free from soy and gluten. It does, however, contain tree nuts, so folks with allergies may be disappointed.

You can pick up 2 pounds for $40, which provides 30 servings of two scoops each. That’s $1.33 per serving, or 6.6 cents per gram of protein. On a per gram of protein basis, that’s about middle of the road: organic, naturally sweetened vegan proteins are typically between 5.7 and 7.5 cents.

The taste is pretty similar to a lot of vegan protein powders: nutty. It tastes like sacha inchi nut, or de-fatted peanut butter, mixed with oatmeal and a tiny bit of vanilla flavor. While I wasn’t a huge fan of the taste personally, it’s milder than most of its competitors and it mixed very well in water. It doesn’t mix well when shaken with almond milk, but few things mix well with almond milk and in any case Kos recommends using a blender, not a shaker.

Kos has made a pretty darn interesting protein: it’s nutritious, it’s got digestive enzymes, it has no artificial ingredients, and it’s pretty reasonably priced. I didn’t love everything about it: the taste is so-so, it’s low in B12, it’s high in sodium, and the two-scoop serving size can overwhelm a shake or a bowl of oatmeal. Nonetheless, I’d consider it better than most of its competitors. 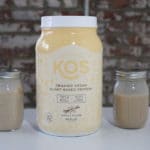