ORAC-Energy Greens and Vitamineral Green are marketed very differently: the former has a strong emphasis on its science-backed benefits, while the latter has a more New Age-y appeal, with the jar featuring a glowing angel and promises to enhance your magnetic and vibrational energies.

We can’t blame these products for trying to appeal to different markets, but is there a way to tell which is the more effective supplement? We took a harder look to see which is more likely to improve your health.

Believe or not, it barely tastes of anything. It’s bland and has a slightly peppery aftertaste, so it’s quite reminiscent of celery juice.

This was definitely the worse-tasting of the two supplements. It’s totally free of flavorings and sweeteners and tastes like straight wheat grass and algae. It’s earthy and soily, and you might find it hard to disguise the taste in a smoothie or juice.

The price fluctuates a little, but on Amazon you can get thirty servings for roughly thirty dollars, or if you want to invest in a large, 364-gram jar, it winds up at less than 75 cents per serving. 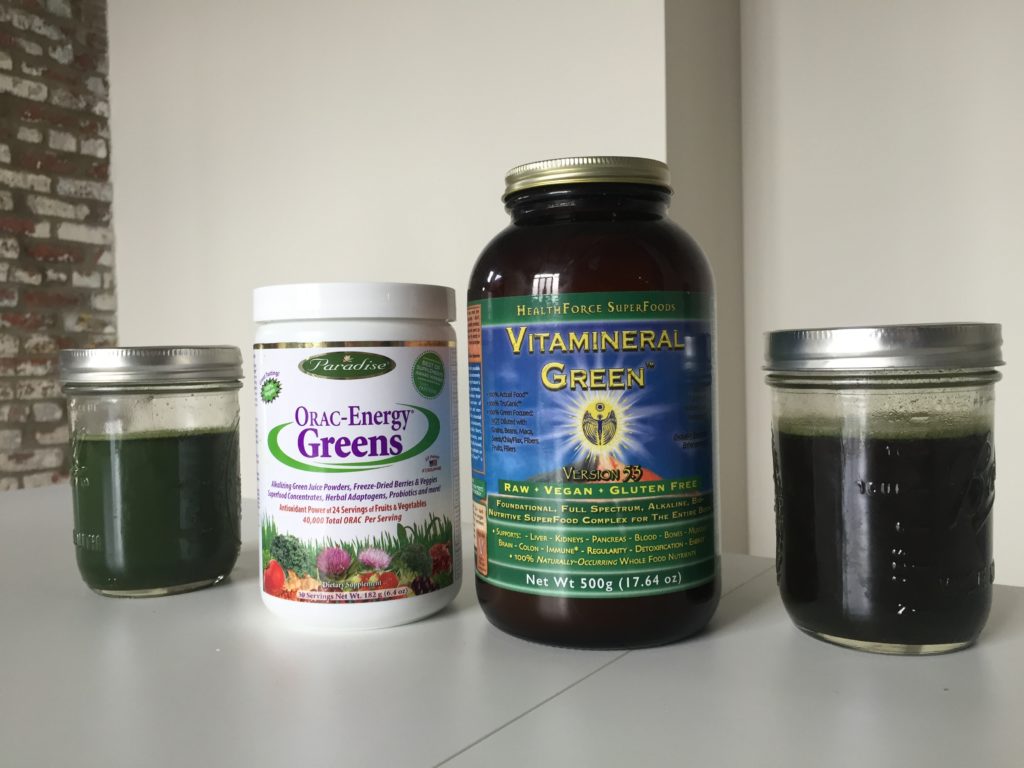 There are two more unusual blends: one that’s focused on quercetin, a plant pigment and antioxidant that’s linked to heart health and reduced allergies; and a blend of adaptogens, compounds that are linked to stress management and recovery that include ashwagandha, astragalus, holy basil leaf, and suma root.

Unlike many greens powders (and unlike Vitamineral Green), it lists the quantity of most of its ingredients as well, so if you’re curious about whether or not you’re getting an effective dose, you can look it up. Note that some of the blends are proprietary, but most of the ingredients’ weights are listed.

They’re split up into six categories: “From the Waters,” which has spirulina and chlorella, “From the Oceans,” which has five kinds of algae, “VMG Enzyme Concentrate” which has seven kinds of digestive enzymes, “Probiotics” which has six kinds of probiotic bacteria, and the largest category is “From the Land,” which has ingredients like barley grass, moringa leaf, and holy basil.

“From the Land” also has a lot of unusual ingredients you don’t see in most green superfood powders, like nettle leaf, carob pod, chickweed herb, yacon leaf, amla berry, and shilajit. A lot of these are used in traditional medicine like Ayurveda, and while some have been linked to health benefits, others (like chickweed herb and yacon leaf) don’t yet have a lot of scientific evidence supporting therapeutic use. Ultimately, I have more faith in the more conventional, science-backed ingredients in ORAC-Energy Greens.

OK, so what are the benefits here? The biggest selling point for ORAC-Energy Greens is that it uses the ORAC scale to measure its antioxidant content. That’s generally considered the best way to measure antioxidant potency, and with an ORAC scale of 40,000, one serving has three times the antioxidants found in a cup of blueberries. That’s truly impressive.

Regarding micronutrients, it’s not astoundingly powerful, but it positions itself as an antioxidant supplement and in that regard, it’s the most potent source of antioxidants I’ve ever seen. It also contains a wide variety of adaptogens, and it contains 1.2 billion probiotics per serving from five different strains. That’s on the lower end as far as probiotics go, but it’s a nice inclusion.

Vitamineral Green is marketed in a pretty “New Age-y” fashion and it contains a lot of ingredients I’ve never seen before. It’s rare in that regard; if you’re a big fan of natural medicine and have been trying to find a supplement that contains both bladderwrack and shilajit, you’ll be delighted. But that’s all that really makes it stand out from the crowd: as far as vitamins, minerals, antioxidants, and probiotics go, we don’t have a good idea of what the product delivers.

When compared to Vitamineral Green, ORAC-Energy Greens is cheaper and does a much better job of quantifying its benefits and convincing me that it’s a worthwhile supplement.