How to Succeed in Weightlifting: Don’t Make Bad Meets Worse

In mid-March I attended the first of the American Open Series Competitions in Reno, NV, where I was able to witness our new webcast process in action. If you haven’t heard yet, BarBend has partnered with USA Weightlifting as their new media partner.

During this competition, I was given the opportunity to commentate a few sessions for BarBend along with 2-time Olympian (2004, 2008), Chad Vaughn. Chad and I saw some incredible lifting during these sessions; new American Records set and two female double body weight clean & jerks within minutes of each other. We also witnessed some new faces, impressive up-and-coming lifters, and of course, the occasional bad day.

During one of the sessions, Chad and I had a short discussion on what it means to have a bad competition. If you compete in weightlifting long enough, those days are bound to happen. He noted that quite often bad competitions cannot be pin-pointed to any one circumstance, and we can only speculate from our commentary position as to what may be happening. In addition, we talked about how every competition, good or bad, is a learning experience. 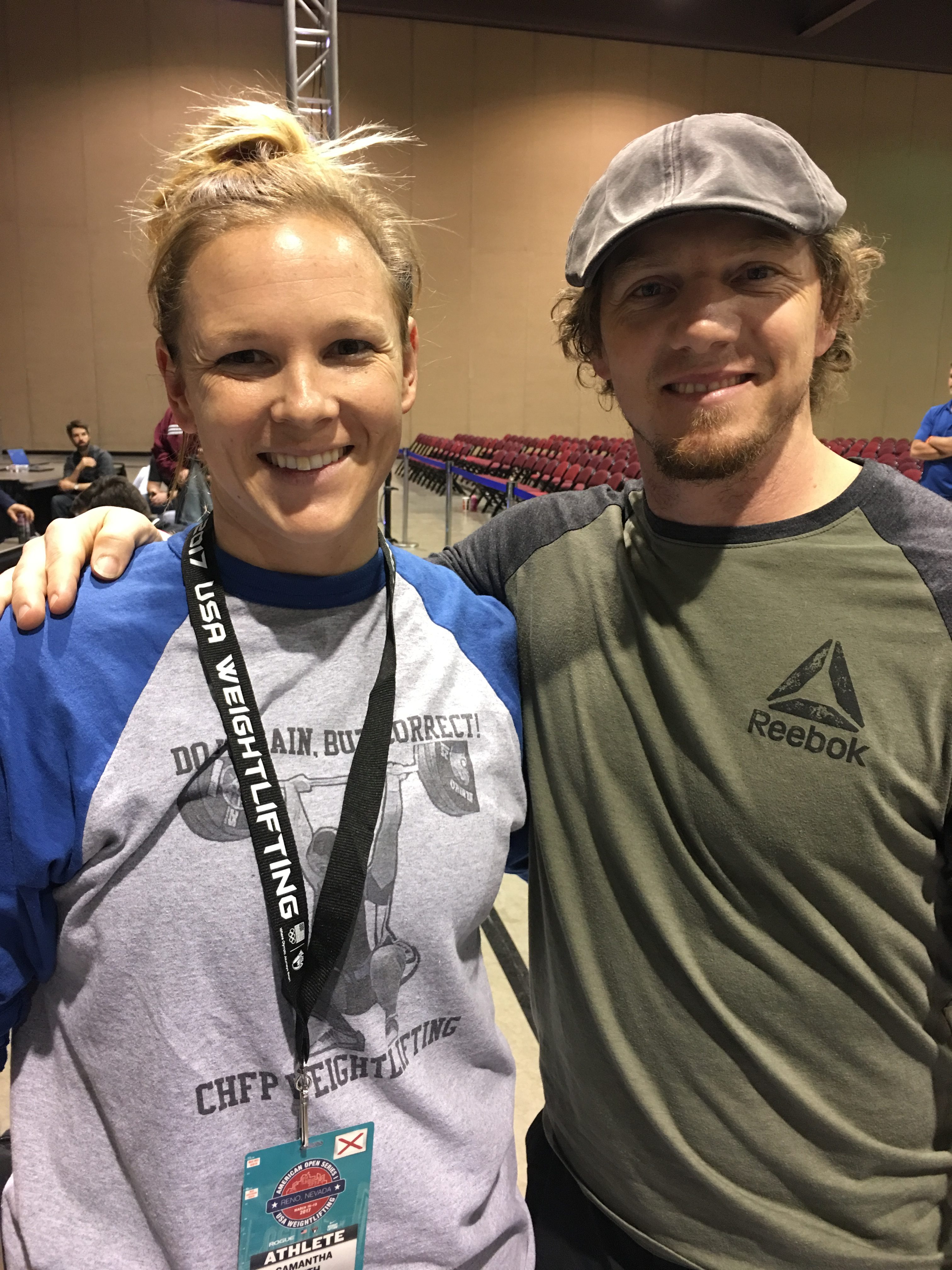 Throughout my years competing and coaching weightlifting, these bad competitions are usually attributed to weight cut, illness, traveling stressors, or lack of sleep, but factors such as lifting with late start times, time zone differences and simply self-doubt can also play a role. However, I am not writing this article to tell you how to avoid bad competitions (that’s up to you and your coach), but I can give you a few tips I’ve discovered so you don’t make a bad meet worse.

Your opening attempt should be one you are confident making under any circumstances. My coach, Cara Heads Slaughter, explains to her athletes that overreaching on your openers really does you a disservice in the end. Often times you miss and it’s a wasted attempt. If you do happen to make the lift, it doesn’t always give you a good start to build into a bigger number. If you attempt an opener too close to your personal best, you may only make that lift. Instead, choose a lower number and build your way into the bigger attempts and you will probably finish higher.

You are given three attempts, so use them all. Generally, in competitions where athletes enter with similar entry totals, the athlete that successfully completes the most lifts wins.

2. Watch the tempo of the meet

Before working with Cara, I was coached by my husband, Jason. He was always watching for the tempo of the meet when timing my warm ups. Jason would not only count the attempts, but he would have a stopwatch and time them. He would watch for the average time it would take to complete a certain amount of lifts and use this to time my warm ups.

Sometimes, you enter meets where everyone is making their attempts, and it runs smoothly. Other times, there are lots of misses that make the meet run a little slower; additional two minute clocks and smaller changes to allow athletes to have more rest time. Jason would take the time into consideration and either split the difference so my warm ups would have a relatively equal amount of rest between them, or he would repeat a warm up attempt.

This past meet in Reno had a lot of technical stops, and Chad and I noted how hard it is to account for these, because you don’t know exactly how long they will last or how many will occur in one session – a good rule of thumb is to take a warm up attempt every 2 minutes. 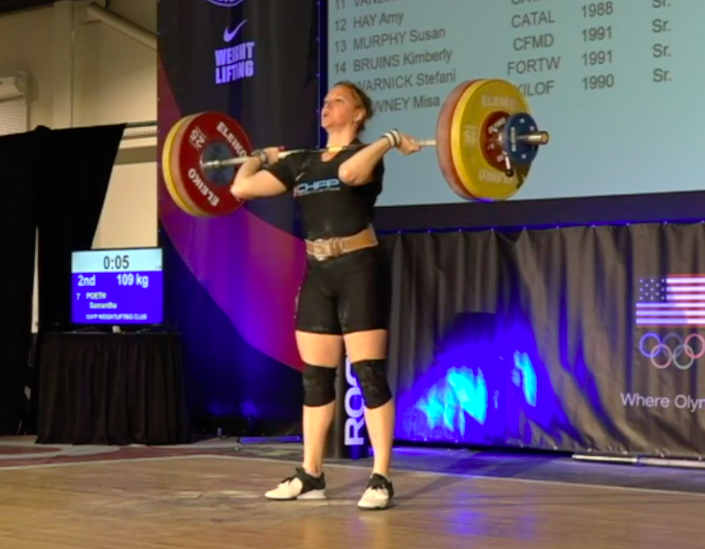 Cara uses a different strategy that has the same effect. She builds in a repeat weight when writing your planned attempts that is somewhere in the middle of your warm ups (neither too light nor too heavy). This attempt can be used to smooth out any technical issues that you may be having, or it could be removed for time purposes if necessary. I’ve found this attempt to really build my confidence before moving into the heavier attempts, because it allows you the chance to really execute the details we have been working on in training.

No one loves a well organized plan more than myself. I really like to have an idea of what I am doing before I begin a task in all aspects of my life, but especially on meet day. However, sometimes things happen and you need to change the plan. Leading into Reno, Cara and I had taken every precaution to ensure I was recovered, even tracking my HRV levels (more on this in a future article), and because of this we followed our game plan rep for rep in the snatch. With the exception of my last snatch, it worked for us.

The night before, Chad and I watched less experienced lifters make mistakes that I felt like may have been avoidable in some cases. They would miss attempts and go up in weight regardless or try to force lifts that may be better choices for 2nd attempts. Chad mentioned that some athletes may have missed and gone up to give themselves more rest time, while others may have been sticking to their plan regardless of missing the attempts. I am a stubborn athlete myself, so I can see where they might want to try, but in my opinion, success gives you the confidence to have more success.

Change the game plan and give yourself the opportunity to be successful.

In the same American Open Series, by the time the clean & jerk came around, I was exhausted. I could blame it on altitude, or the time (I train in Alabama at sea level and it was something close to 1am my time when I took my clean & jerk attempts on the platform), but I’m not here to make excuses, because I knew these things before booking my plane ticket.

I knew about 3 warm up attempts in that the weights weren’t moving like they should, and I really had a mental battle with myself. I had a really strong training cycle leading into this competition, and the numbers I knew I could lift were swirling around in my mind. Regardless, I knew that my planned opener at 115kg wasn’t happening that day – at least not as an opener.

I can’t even express how thankful I am for Cara. Her personal experiences, overall knowledge of the sport, and calm approach really saved me that day. In the past, I would have ignored the warning signs and tried to force something that just wasn’t there, and I probably would have missed all three attempts. Cara went to the card table, looked at what my options were, and chose a weight that was in my wheelhouse for that day. Unfortunately, I missed my opener, but I came back to make my second and third attempts and I really had to work for both of them. Leading into this meet, the weights I made were ones I wouldn’t even have to think about, but that’s how it played out and I can honestly say that I left with no regrets.

I believe that whether you are a beginner in this sport or you’ve been lifting for years, bad competitions are going to eventually happen and sometimes for more reasons than we can understand. I’ve had some of my best training cycles followed up with my worst competitions and terrible training cycles followed by personal record performances. I think the most important thing is to believe in yourself, understand what you are capable of achieving, and remember that a bad performance doesn’t define you. The next competition is a fresh start and new chance at 6 attempts.