You can always rely on drunk men to come up with new ways to test their fitness.

“It was an idea that was started fifty-four years ago in a pub with a bit of banter between two men in the village who thought he was fitter than the other,” Duncan Smith tells BarBend in a thick Yorkshire accent. “One was a coal man and the other was a farmer. So they had a little wager between themselves. ‘Tell you what, get a big bag of coal on your back and I’ll have you race from the local pub up to the village green.’ And that’s where it started. Two drunk men having a bit of a banter.”

These humble, booze-soaked origins are what led to the World Coal Carrying Championships, an annual event that Smith holds every Easter Monday in the tiny village of Gawthorpe in northern England.

Sponsored by a local funeral director (and why not), the event has welcomed competitors from every corner of the planet, and Smith is expecting over two hundred competitors in 2017. Think you’re coal miner strong? 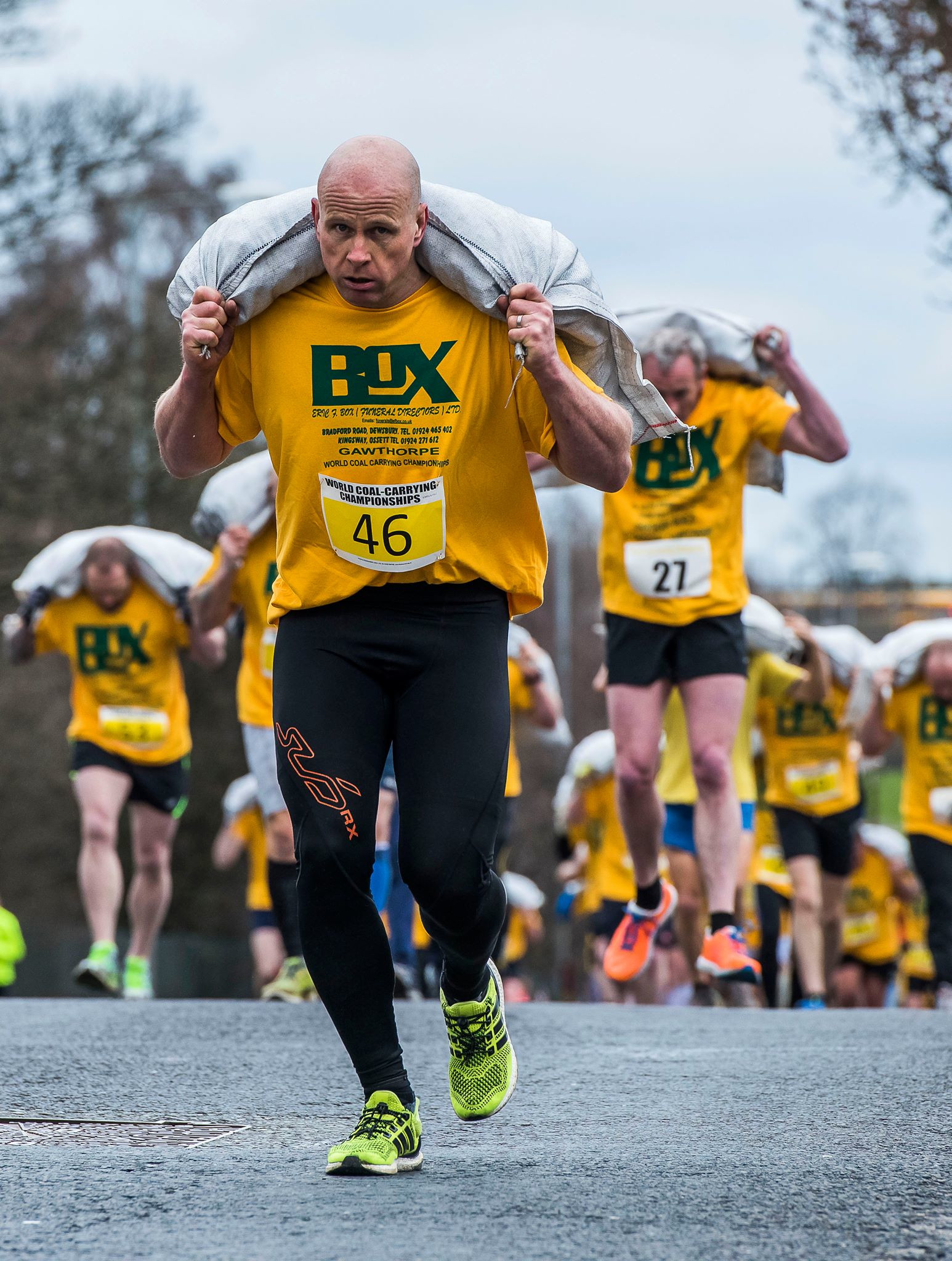 No Walk In the Park

The rules are simple: run a thousand meters with a sack of coal on your back. Men carry bags of 110 pounds and women 45 pounds, and it’s split into three divisions: men, women, and “veterans,” comprised of men over forty. Men stand to make 750 British pounds (USD919) and women 500 pounds (USD613) if they win, and that jumps to 1,000 pounds (USD1,225) or 625 pounds (USD765) if one manages to break the current record of four minutes and six seconds, or four minutes and twenty-five seconds for ladies.

Maybe you’ve been working on your work capacity, or maybe you’ve increased your loaded carry work, and you don’t think that sounds all that tough. That mentality is exactly what you need to completely fail at the course.

“It’s a sheer blast of exertion, you’ll never do anything as hard,” says John Hunter, a ten-time race champion who makes a hobby of running military-style endurance races around the country. “Gawthorpe is one of the fastest races out there. From the gun, you have to go flat out. People collapse, their legs go to jelly, they drop the bag and they just cannot pick it back up. Every year, I get nervous because you just don’t know what’s gonna happen. It’s such a shock to the system.” 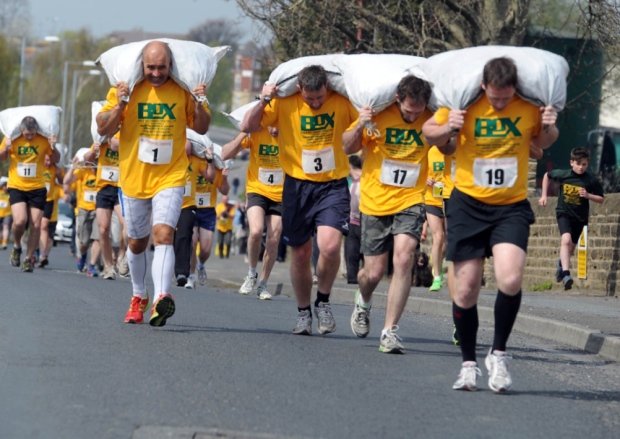 John Hunter, in his lucky white compression shorts, accelerating to first on an uphill stretch.

Coal carrying has some similarities with the increasingly popular sport of rucking, which involves marching or running with a loaded backpack. It’s been studied a little more closely than the Gawthorpe coal carriers, and has been shown to burn up to three times more calories than a regular walk, improve hip and postural stability, increase work capacity, and boost injury resilience in a safer and more effective manner than your average jogging habit.

The obvious difference with coal carrying is that the weight isn’t held in place with secure straps – it’s an unstable sack that the runner holds in place by grabbing the corners by his or her shoulders. It’s really important to point out how much more difficult this makes the exercise. With the coal shifting around the bag and the body’s stabilizing muscles working that much harder to keep it from falling to the ground, the 110-pound bag feels far heavier than it sounds. 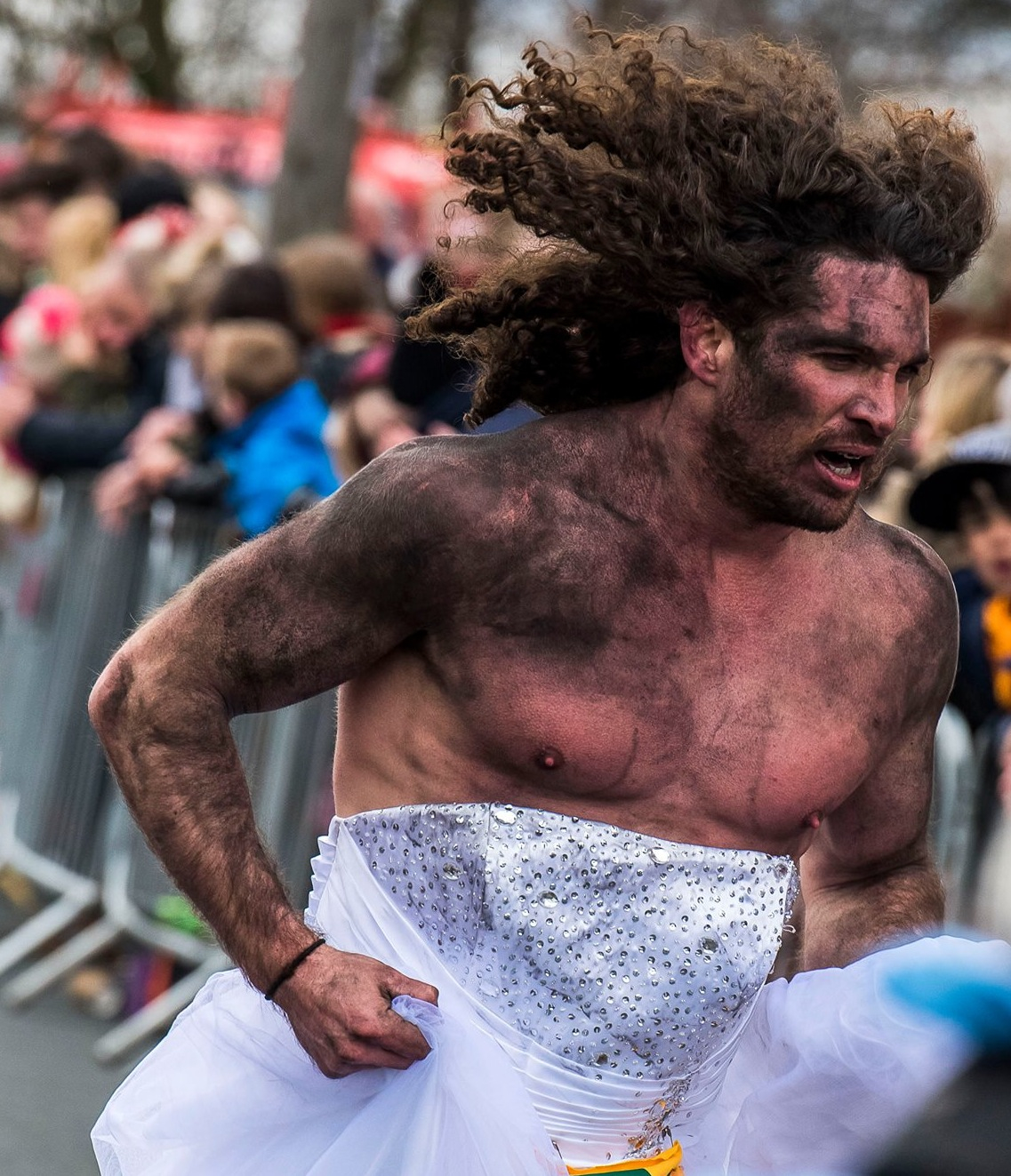 Not all coal bags make it to the finish line.

Hunter spends a solid three months training for the Gawthorpe Coal Carrying Championship, working out six or seven days per week. Here’s what his training looks like.

With eighty pounds in a bag around his neck, Hunter runs a hill that’s five hundred meters from bottom to top and ascends at a one-to-four gradient, or about fourteen degrees. It takes him three minutes to reach the top, then he jogs back to the bottom and starts all over again, for five total runs.

Hunter drags an eighty-pound tire with a chain for one and a half miles, broken into six sets of eight hundred meters. “It’s not massive, but I drag it on the beach at low tide,” he says. “So you’ve got a lot of resistance against the sand.”

Now armed with a two hundred-pound “lorry tire,” Hunter heads back to the five hundred-meter hill and attacks. To reach the top, he needs to flip the tire about three hundred times, then he carries it back down. One round is enough.

In the final three weeks of training, he’ll dial down the hill sprints and start running the actual, 1000-meter course. Three or four times a week he’ll complete a run with the full competition weight on his shoulders, but about once a week he’ll farmer’s walk the course with two 32-kilogram kettlebells in his hands. When his grip fails, he drops to the ground and does push-ups until it recovers.

Hunter cautions that a lot of athletes don’t train to tolerate a lactic acid buildup and that after the first five hundred meters, many runners seize up.

“The course also has a gradient start so you can’t get into a set pattern,” he says. “After a couple hundred meters it flattens, then it goes up again, so it plays tricks on your legs. It flattens off again toward the end, so people sprint to the finish and their legs give way. That happens to quite a few people at the top of that hill. I did it once and I was like Bambi, my legs just went out from under me. If I’d kept at a set pace, I’d have won it.” 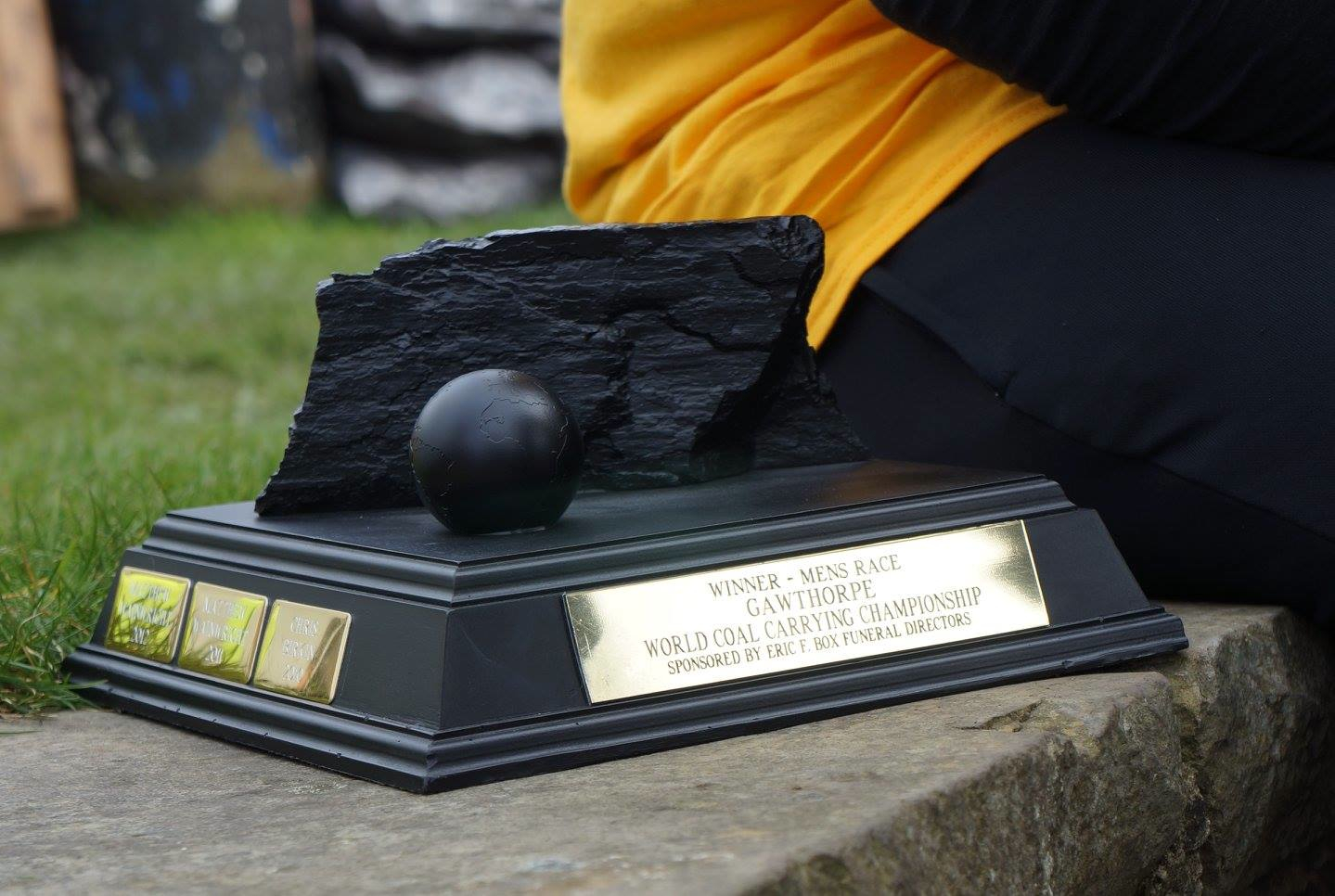 Ladies and gentleman: Think you can beat 1000 meters with 45 or 110 pounds on your back (respectively) in less than four and a half minutes? Then there might be hundreds of dollars with your name on it in waiting for you in merry old England.

The Gawthorpe Coal Carrying Championships are held every year on Easter Monday (that’s April 17 in 2017), the profits go toward providing social support and activities for the village’s elderly population, and the entry fee is just fifteen pounds for men under forty and ten pounds for women and “veterans”. You can sign up here – or you could always start your own tradition of coal carrying. Drunkenness optional.