Speed; a simple concept in theory, but complex issue in reality. Every athlete could always use a little more speed, whether it be on the field, in their sport, or under the bar.

A common issue that comes with speed is the misunderstanding on how to actually move faster. Speed and moving faster rely heavily on one’s current neural drive, peak potential, and an individual strengths/weaknesses, which can get confusing.

To clear the air on speed, we reached out to Joseph Potts, CSCS, RSCC, and owner of TopSpeed Strength and Conditioning in Overland Park, Kansas. Potts worked for many years as the speed coach for the Kansas City Royals, and has worked as a private consultant for ESPN, NFL, and MLB teams. 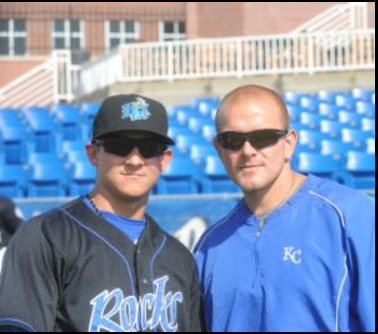 BarBend: Could you give us a quick background about yourself for readers who may not know you?

Potts: Joseph Potts, owner of TopSpeed Strength & Conditioning in Overland Park, KS. I spent several years as an assistant strength coach at the collegiate and professional level prior to going into the private sector.

Since TopSpeed opened in 2012, we’ve had multiple athletes drafted into & signed by the MLB, NFL, pro hockey, and basketball, which include back-to-back 1st round MLB Draft picks in 2016 and 2017 (Riley Pint and Alex Lange). I’ve also served as a contributing expert for media outlets like ESPN, YahooSports, and Stack Magazine.

BarBend: Speed is something every athlete wants to improve upon, but is improving speed as simple as moving the body, or an object faster? Where do most athletes get speed wrong?

Potts: Most athletes go wrong when trying to improve their speed by misinterpreting how to actually move faster. Research has shown that faster athletes actually take less steps to cover the same amount of ground than slower athletes.

This is why things like ‘speed & agility ladders’ are actually counter-intuitive. They reinforce rapid-fire foot placement over energy displacement. Likewise, being too tense when sprinting causes an athlete to tighten up and doesn’t allow them to reach their full stride-potential when running.

BarBend: When you’re trying to increase an elite athlete’s speed (who’s already relatively fast), what are a few things you look at other than maximal speed to improve their performance?

Potts: Actually outside of checking movement efficiency and tweaking if necessary, I rarely look at an athlete moving at maximal speed. Approximately ~90% of my athletes improvements in speed come from improving their ability to move faster under 30 meters.

The majority of our speed-training is under 20 yards with non-track athletes. With high-level guys who already have a high speed threshold I asses the metrics that make up a fast athlete (movement efficiency, strength, RFD). Then, we make the weakest of those areas the primary objective for a training-cycle or two before reassessing.

BarBend: In your opinion, how important is strength for increasing speed? Is there a cutoff between how strong an athlete can get, and how fast they can move? For example, can an athlete actually put on too much mass in some areas and hinder their performance? Do you have ways to assess this in certain athletes?

Potts: Strength is important, but not the pinnacle of speed-capability. I had an athlete who ran a 4.27 laser-timed forty yard dash that rarely, if ever, squatted more than 135 on the bar. His go-to bilateral squat movement was the goblet-squat. In fact, of the multiple athletes I’ve trained who ran sub-4.4 forties, none of them were what you might consider “heavy” squatters.

In my opinion, the importance of strength really depends on the athletes anthropometric measurements. Anecdotally, shorter-limbed athletes will have a greater need for strength than their long-limbed counterparts who find success with a greater rate-of-force development. Both will need to have very good level of relative-strength.

Strength and mass are actually another area a lot of athletes hurt themselves in when trying to get faster. They’ll often add mass in their quest to reach higher level of absolute strength. As I mentioned above, in my experience, the fastest athletes I’ve been around were guys and girls with a great level of relative-strength versus absolute.

Potts: We typically train speed 2-3 times per week, and days are often broken down into which direction the majority of the energy displacement will take place in.

Volume depends on the athlete involved, their schedule for the week, and their feedback during workouts. If an athlete is undersized or highly ectomorphic, then we may add a third or fourth day specifically to train for hypertrophy, but I won’t go more than 4 days a week outside of yoga/mobility work.

BarBend: Do you have any go-to movements for working speed with beginner, intermediate, and elite strength athletes? Where/when should an absolute beginner think about working speed specifically?

Potts: Our primary speed-training movement is actually a custom-built push sled. It is fantastic for improving an athletes relative-strength levels.

Depending on what one considers ‘speed work’ a beginner could start right away, I would suggest they focus on improving the technical aspects of sprinting and movement before moving on to strength and RFD.

BarBend: If an athlete is finding that their speed training progress is stalling, what’s your next step, or area you assess? Should they take a break from it, or shift focuses in their training?

Potts: Hopefully all athletes realize the positive effect that comes from deloading and take some rest to let the body fully regenerate. If that doesn’t work I suggest reassessing and quantifying whatever metrics they’ve been tracking, so they can look for an area that may be lagging behind the others, and then adjusting as necessary.

BarBend: Do you think at a certain point speed is an innate quality athletes’ possess? For example, is there a cap on an athlete’s neural potential (reaction time), and do you have any methods for assessing this characteristic in your training?

Potts: Everyone has a cap on their capabilities predetermined by their DNA, and speed is no different. The truth is, most athletes actually will never reach their true full potential in their lifespan as a competitive athlete. Those who do, or even come close, are often the elite of the elite.

With that said, and based on that belief, I simply rely on multiple-metric assessments to point me in the right direction, so that we can tweak the programming and continue to make progress with that athlete.

BarBend: What’s been the greatest lesson you’ve learned as a coach training elite athletes to improve their speed?

Potts: The greatest lesson is recognizing that each athlete will have their own unique set of anthropometric and bioenergetic strengths, weaknesses, and needs.

This is often the failure when training in a group or team-setting, the lack of individualization. That’s why even in a macro setting I try to keep a micro approach.