How to Increase Your Speed Under the Barbell in the Snatch

Getting under a barbell in a fraction of a second takes courage, precision, and power. The ability to drive a load vertically with the legs, back, and traps is only half the lift, with many lifters finding it challenging to find the balance between a finished pull and a fast turnover under the barbell. 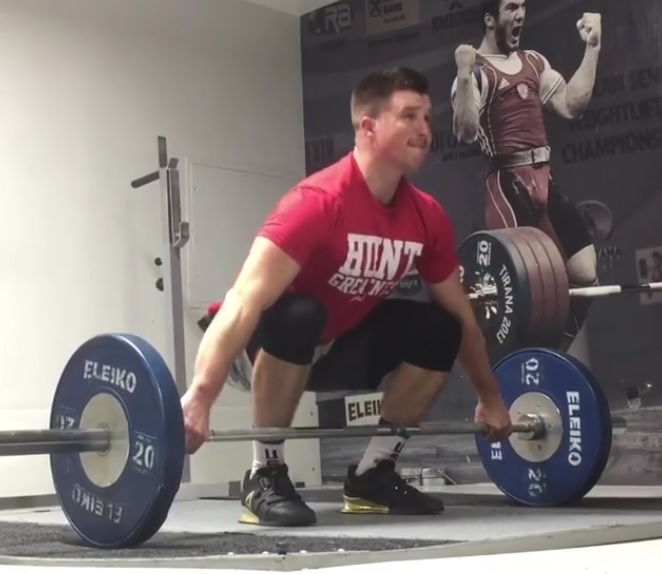 In this article, we will specifically highlight a few exercises and coaching cues to help lifters gain confidence and speed while receiving the barbell in the snatch.

Many coaches and lifters refer to the last component of the snatch as the catch phase, implying that a lifter “catches the barbell overhead”. While the terminology differs coach to coach, organization to organization, I prefer the term, “receiving” the barbell. My issue with the term “catch” is that it implies that a lifter at some point or another will not be connected to the barbell, and then “catch” (as one would catch a ball being tossed to them) it while secured in the overhead squat receiving position. While receiving is very similar to catching, I personally feel that it implies more action by the lifter to stay connected throughout the turnover phase of the snatch, which highly impacts the speed and success of the lift. While these are my opinions, I urge coaches and athletes to consider the usage of such terms when teaching and training the snatch, specifically in the “receiving” phase of the barbell.

Drop vs Pull Under the Barbell

When giving cues to athletes on how to quickly secure themselves under the barbell in the receiving phase of the snatch, we tend to hear two main verbs given. The first, “drop”, implies that an athlete should free fall under a barbell at the cessation of the pulls. While, yes, this is what happens on a surface level, I personally feel that coaches and athletes need to think of a more actionable word to cue the receiving phase of the snatch. By “pulling” oneself under a barbell, we are directly implying that a lifter must apply force via the hands and arms to actively pull themselves faster and aggressively under the barbell. By doing so, a lifter will not only increase their speed under the barbell, but also have active arms and shoulders to be able to lock out the arms and torso in the receiving position. By paying closer attention to our coaching cues, we can immediately impact a lifter’s performance under the barbell.

Now that I have offered my two cents on the usage of terminology when coaching the receiving phase of the snatch (which should be applied to the below movements), here are some exercises coaches and athletes can use to reinforce greater speed and positioning under the barbell in the snatch.

This is arguably one of my favorite exercises to use as a primer movement (prior to snatch sessions) or as assistance snatch lifts when targeting fluid, fast, snatches. By not allowing the lifter to move their feet, you negate their ability to jump forward or backwards, which may be due to not staying balanced or connected in the pull and/or turnover phase. Lastly, the lifter must actively pull themselves under the barbell into the overhead position while simultaneously and aggressively extending the elbows prior to the barbell “crashing down” upon them., making this a premier exercise for increasing speed and aggression while receiving the barbell in the snatch.

Finishing the pull is often overlooked as the culprit to slow turnovers and catches. By teaching athletes to fully finish the pull via opening the hips and extending the torso upwards and slightly back, you allow the barbell to accelerate throughout the entire pull. That acceleration can result in not only a higher terminal height of the pull, but also giving a lifter more time to apply force as they pull themselves under the barbell aggressively so that they can confidently secure a strong, fast receiving position.

This is a great exercise to teach a lifter to stay connected to the barbell after the second pull and into the turnover and receiving phases of the snatch. Additionally, this exercise can be great to help athletes develop greater balance in the foot during the final phases of pull, which can help them to move directly downwards under the barbell rather than jumping forwards or backwards (which take more time to secure positioning underneath due to increased horizontal displacement).

This last exercise may or may not be categorized as a “speed-enhancing” snatch assistance lift, however, I personally feel that muscle snatches (both with or without hip contact) can help a lifter develop the strength and motor patterning needed to finish the pull and stay active in the turnover phase of the snatch. By having a better turnover (both strength and patterning), a lifter will be able to produce greater amounts of force on barbell to drive themselves faster and more aggressively downwards as they enter the receiving phases of the snatch.

While many of us coaches and athletes may differ on the terminology that we can use to coach a stronger and faster turnover and receiving position in the snatch, we should be able to agree upon the benefits of the above movements. Coaches and athletes can apply the same principles and movements (with the exception of the snatch balance) to clean variations to develop a stronger and more secure receiving position for the clean.