The Insane Rise of Mas Wrestling, the Best Strength Sport You Haven’t Tried Yet

Short of beating a person into unconsciousness, it’s hard to think of a more primal battle of wills than Mas wrestling. Sure, flinging kegs, flipping tires, and hauling Atlas Stones all come with their own well-deserved glory, but if you really want to know who’s stronger than whom, what really compares to fighting over a stick? 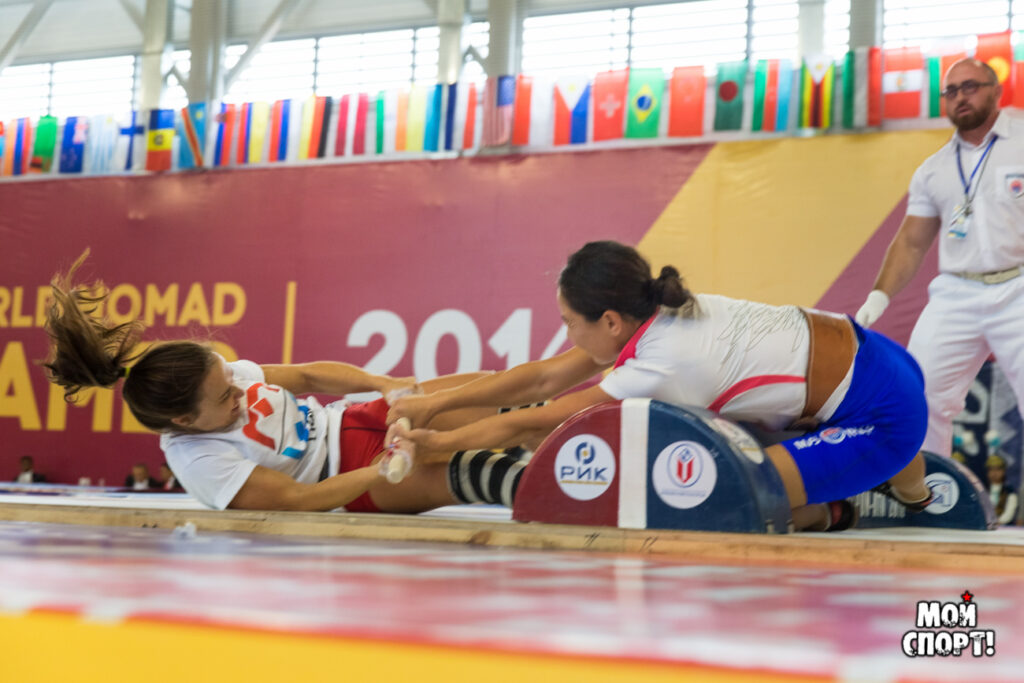 “It’s as perfect a test of two people’s functional strength as you can get,” says Odd Haugen, the  president of Mas Wrestling USA. A veteran strongman athlete (he was crowned the Strongest Man in America in the 1999 AFSA USA Strongman Championship) and lifelong promoter of strongman competitions, Haugen fell in love with the sport when he realized it provides the one element that’s missing from most events: man on man combat.

“I was always looking for a better way to pit man against man,” he says, though women, of course, compete with gusto. “Highland games and rope pulling have always had their place, but Mas involves more dynamism than any individual strongman event.”

From Russia, With Love

Get the stick. That’s the sole aim of Mas wrestling, an indigenous strength sport from the frosty Sakha Republic in northeastern Russia. Also known as the Yakutia Republic, it’s a landmass that’s the size of the United States yet home to fewer than a million people — and Mas wrestling is their national sport.

It’s been said the Yakuts picked up the game from Vikings, and due to its history as a favorite pastime for bored sailors, variations of it can be found across Northern Europe and even Alaska. (It still appears in some highland games as Maide Leisg, Scots-Gaelic for “lazy stick.”) Haugen claims to have found examples of Mas wrestling in a Scandinavian physical education book from 1905, and that throughout the 19th century it was a relatively common sport in much of northern Europe, including Sweden and Denmark.

But even though he hails from Norway, a country with a rich tradition of strength sports, Haugen (like most of us) grew up totally ignorant of it.  That’s why he founded Mas Wrestling USA: his ultimate goal is to make it recognized and included as an Olympic sport. Today, there are hundreds of competitors in various Mas competitions in the US, and a recent championship held in Kyrgyzstan welcomed 192 athletes from 42 countries, spread over seven weight categories for men and five for women.

The Rules of Mas Wrestling 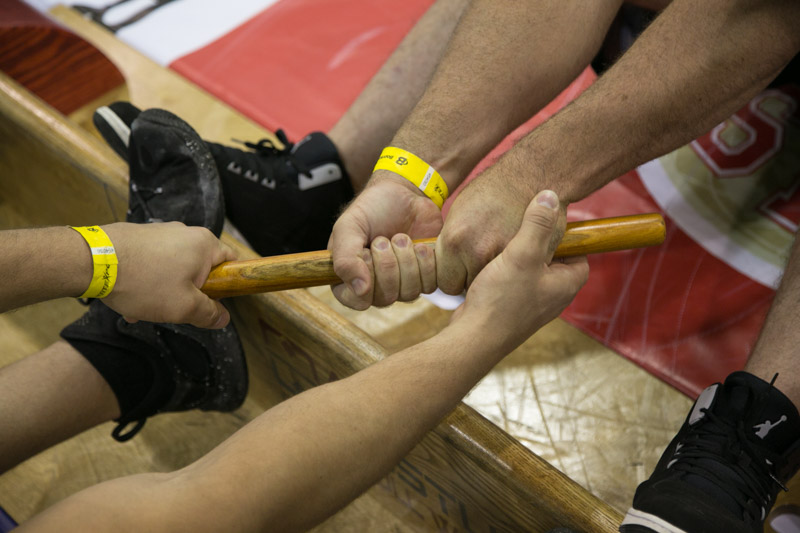 Athletes sit in front of each other heel to heel, prop their feet against a wooden board, and pull on a stick about twenty inches long, one and a quarter inch in diameter, and typically made from birch or oak. (Highland games traditionally use a swingletree, a wooden shaft used to connect a cart to a horse harness.)

A random draw decides which player is “red” and which is “blue,” and matches are won best two out of three. The average round lasts about thirty seconds and is officially limited to two minutes (though that’s seldom reached). Each athlete takes turns selecting their favorite kind of mixed grip: both hands in the middle of the stick, or placed at either end. (If there’s a third bout, blue gets a second pick.)

Which grip is most likely to dominate? That depends on preference and tactics, and good technique can level the playing field. Very broadly speaking, a player hoping for a direct pull goes with an inside grip, while those who plan on moving around the board take the outside grip, which gives better leverage — but keep in mind that athletes aren’t allowed to twist the stick more than ninety degrees.

Sure, it looks a lot like a seated deadlift. But a strong deadlift and a crushing grip aren’t necessarily what it takes to win matches. 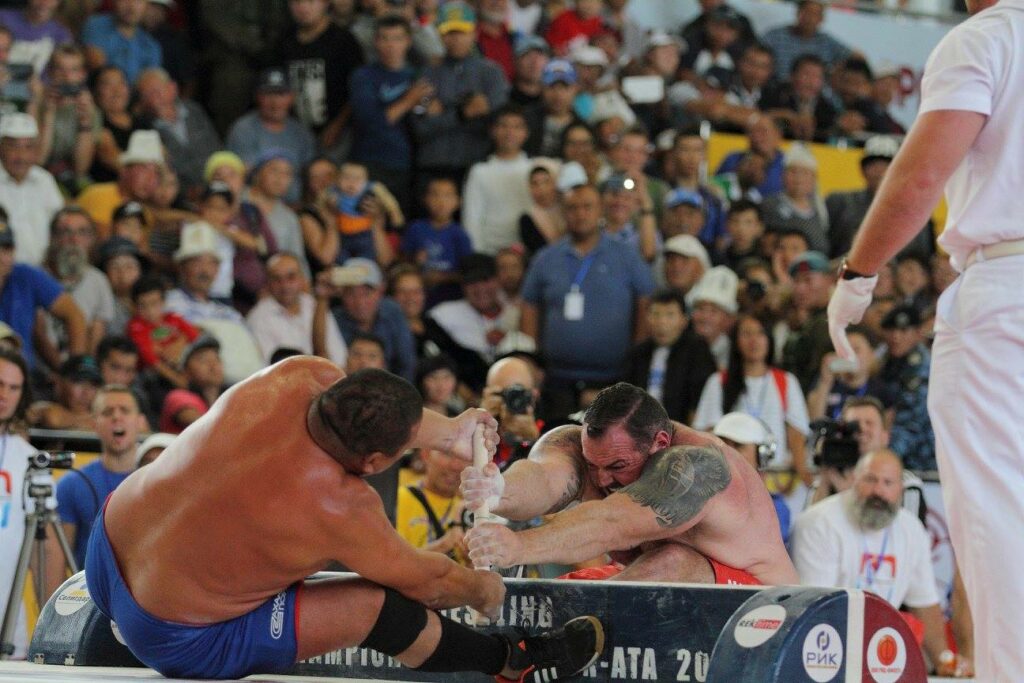 “I can deadlift 750 pounds, but I can beat a guy who lifts 900 pounds,” says the 66-year-old Haugen. “I’ve seen guys who weigh 90 kilograms beat guys weighing 200 kilograms. That’s because they know how to leverage themselves and they know that speed and agility are really important to victory.” In that respect, he explains, it’s a little like arm wrestling: a fast start can be enough to tip the odds in your favor. But since competitors are able to shimmy their feet as they respond to their opponent’s moves, agility can also be a decisive factor.

So, how do you train to yank a stick from a strongman? We asked the world champion.

The scene: The 2016 Arnold Classic in Columbus, Ohio. Two men planted their feet on a wooden board for the second of their three matches. Viktor Kolibabchuk had won the Mas Wrestling World Championship for the past six consecutive years, but the Latvian Martins Licis could sense change in the air.

“I kept rehearsing the final match over and over again in my mind, and when it finally went down, it almost unfolded as if my thoughts were made into reality,” Licis told BarBend. “The feeling of victory was overwhelming, so I let out a loud roar that I could not contain. It felt as if I had done the impossible.”

To prepare for his victory, Licis performed mostly strongman activities. (“The tension during the Atlas stone is very similar to pulling someone over the board in Mas wrestling,” he notes.) But in the weeks leading up to the match, he ran drills to sharpen his technique. When Haugen, his unofficial coach, prescribes Licis drills, he includes lots of quick, dynamic movements that use the same musculature as squats and deadlifts. That means a lot of box jumps and speed ladders in addition to monkey bar work and muscle ups to improve speed, coordination, and strength in the arms and posterior chain. 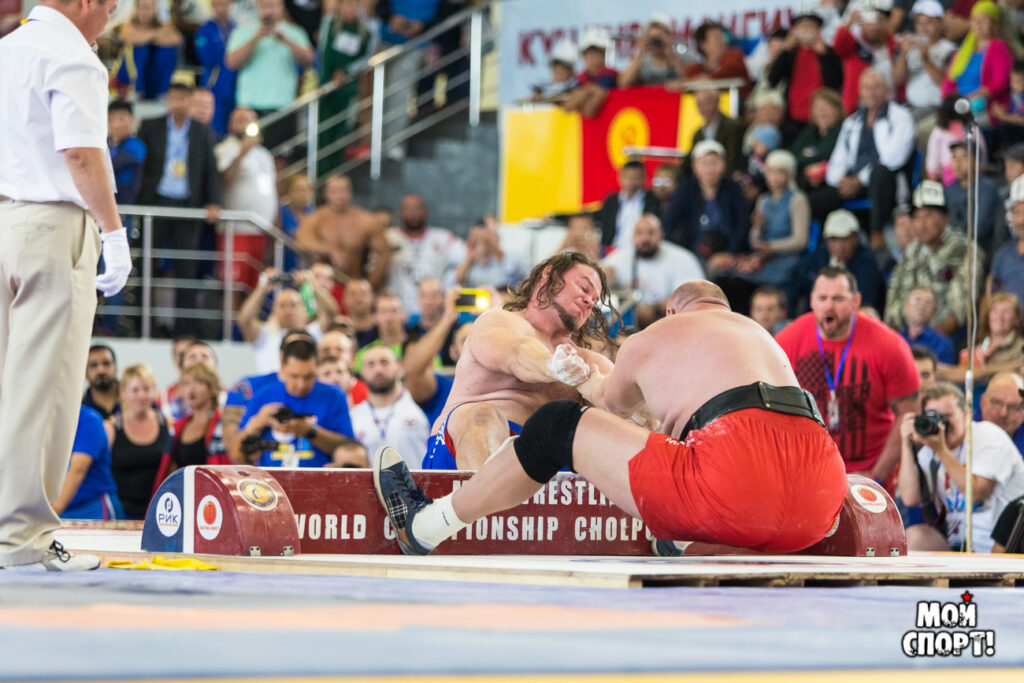 Martins Licis, left, faces off against a competitor.

“But the average lifter should know that training in Mas wrestling gets you better at strongman as well,” says Haugen. “It greatly benefits the deadlift and Atlas stones, and I’ve found that it can actually improve problems with your back. That’s because Mas wrestling is like the opposite of the squat and deadlift: instead of pulling perpendicular to the spinal column, you’re pulling along the spinal column, so most of the stress goes into the hamstrings and the butt while the spinal column gets stretched, rather than jacked.”

Interested? Thanks to Haugen’s efforts, you can now pick up an American-made Mas Wrestling Kit from Rogue and test yourself against some lifting buddies. (Of course, we would never recommend placing bets.) If you think strength duels might be your thing, check out the Certification Workshops and Upcoming Tournaments tabs on Mas Wrestling USA’s website. 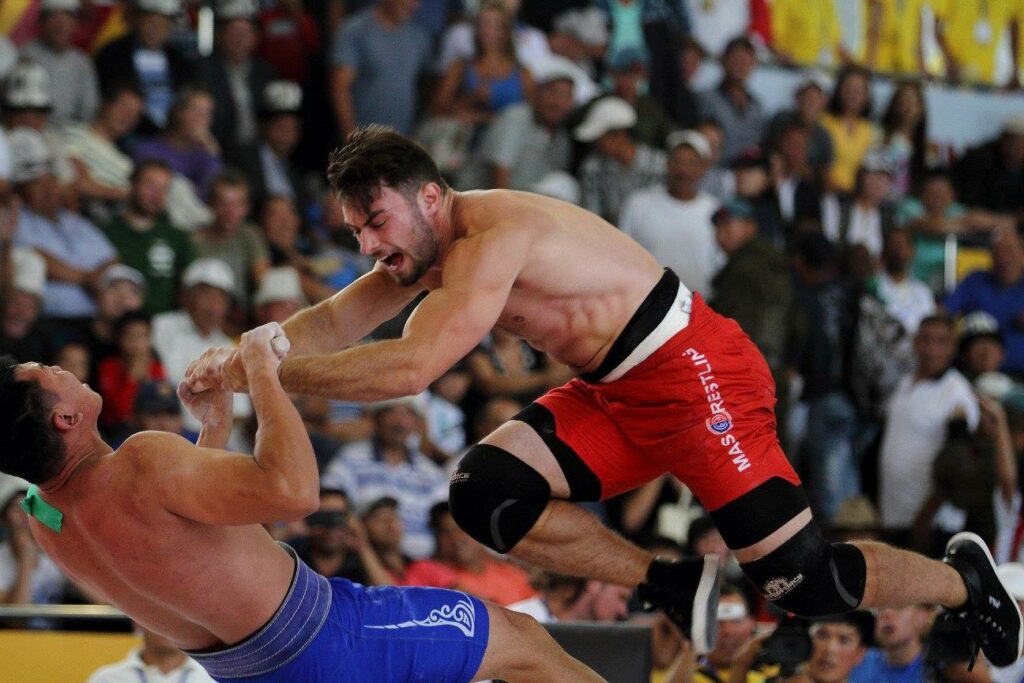 “You know, golf is a simple sport,” muses Haugen. “You hit the ball as far as you can. But there’s a huge amount of finesse and technique that goes into it, and Mas is no different. It looks simple, but it requires full body strength, agility, speed, the works. That’s the image I want to promote.”

It still looks like he’s got a long road to the Olympics, and his next step is to bring Mas to CrossFit centers and strongman competitions around the the country. If strength, simplicity, and an undeniable nostalgic bent are what appeals to the market, Mas wrestling might just be on its way to a comeback.