The word “legend” gets thrown around a lot in the strongman world, but Odd Haugen’s footprint on the sport is indelible. Raised in Norway and known for his monstrous grip strength, Haugen was crowned the Strongest Man in America in the 1999 AFSA USA Strongman Championship, the strongest man in Hawaii in 2000, 2001 and 2003, and he’s routinely finding unusual records to break — for instance, on his 66th birthday he broke a world record by lifting a Thomas Inch Dumbbell 63 times in ten minutes.

That’s a dumbbell that weighs 172 pounds, has a handle as thick as a Coke can, and is lifted with one hand a time. The previous record was 37 reps in 10 minutes.

In addition to regularly holding and competing in strongman events all over the globe, he’s the President of Mas Wrestling USA, an organization devoted to popularizing the Siberian “combat strength sport” of Mas Wrestling.

BarBend sat down with Haugen to hear his tips on grip training, nutrition, and his predictions for next month’s World’s Strongest Man contest in Botswana.

BarBend: Thanks for taking the time to chat, Odd! How’s it going?

We’ll let our readers know. What are you training for right now, as a competitor?

What events are you training for?

Well, I’m going to compete in double overhand axel deadlift, the Rolling Thunder, the Saxon bar — that’s a three by four inch beam that you pinch grip and lift in the middle — and the Excalibur. That’s like a vertical bar you pull with one arm, like King Arthur pulling the sword out of the stone. I think there will also be some bending, too.

Using thick bars, grip challenges, and a bunch of different kinds of deadlifts, all using a thick bar or a Saxon bar. Even with rows, I’m doing it with an axel or dumbbells with 2.5-inch thick grip. Or I’m doing pull-ups with Rolling Thunder handles to make it challenging. Just about everything I do, every exercise except squats has a grip component in it. Even when I train abs, I’ll do hanging leg raises from a thick bar.

Do you use a lot of hand grippers, like Captain of Crush?

I do a limited amount of gripper type work. It has very little carryover to actual lifting, so I don’t do as much of that. But I do use wrist rollers, Iron Mind has a very good one. They’re absolutely terrific for getting a very dynamic grip.

#TransformationTuesday with THE KING OF FOREARM EXERCISES from MH fitness director BJ Gaddour (@bjgaddour)! Most people scoff at an old school isolation exercise like the wrist roller (most gyms will have one). But this move is the real deal. It will blow up your forearms, improve wrist mobility, and boost grip strength and endurance. BJ recommends doing sets of 5-10 reps (a rep is rolling it all the way up and all the way down). Start with 5 reps at 5lbs and add a rep/session. Once you can do 10 reps with that weight, add 2.5-lbs and go back to 5 reps and keep repeating this process. If your goal is to overload your forearms, then hold it at waist level. Holding it at chest level is fine except your shoulders will most likely burnout before your forearms. Do 1 set flexing the weight up (your hands roll under as the weight ascends) then rest a minute. Then do a second set extending the weight up (your hands roll back as the weight ascends). Rest a minute between sets. You can repeat this process 1-2 more times for more volume. BJ says this can be a great starter or finisher on upper body days. As a starter, it serves as a great warmup for the heavier, more taxing exercises to come. But it’s also great as a finisher to get a powerful pump coursing through your veins. So mix it up and find which option works best for you. And remember- if you can't grip it, you can't lift it. #WristRoller #Forearms #Bodybuilding #Wrists #Arms #Grip #Aesthetics #MHFit #BJGaddour #Fitness #InstaFit #Fitspo #Fitspiration #💪

What I do more than anything else probably is hanging by the Rolling Thunder grips, the 2.5-inch grips. When I’m done with training and I need to kill my forearm and my grip a little more, I’ll do 3 sets of 30-second holds, hanging my whole bodyweight. The first set is OK, but by the time you get to the third set, it’s pretty challenging.

I also use the Thomas inch dumbbell a lot, either using it for rowing, or for stiff-leg deadlifts for the hamstrings. And I also practice Mas, and Mas is great for the grip.

You are 67 years’ old and when we last spoke, you told me you can deadlift 750 pounds. How do you maintain that level of strength?

I don’t take time off to screw around and get out of shape. Number one is consistency and just be motivated to do it. So I try to find things to do that motivate me, and doing a competition here and there motivates me to train hard.

You know, you lose some things as you get older, agility and things like that, but one of the things you don’t lose is strength.

400lbs apollon axle behind the back deadlift. @thetraininghall

What kind of prehab exercises do you do?

Foam rolling is always part of my training, prehabbing the body, and I also use a massage stick.  Basically, it’s the first thing I do before stretching and some activation exercises. I always use a hard foam roller on my hip and the lower back, then quads, lats, and at times the IT band and hamstrings as well. It doesn’t take too much time, probably a minute per area. Also, on my back, neck, and erectors I use two baseballs.

I also get massages at least every week, and I go to the chiropractor for some adjustments usually once a week. It depends how I’m feeling.

And for my grip, I use sandpaper to keep the calluses nice and smooth so they don’t tear when I’m lifting heavy weights.

[Ever given much thought to all this foam rolling? Here’s the best foam roller for the IT band.]

2 more days till the LA FITEXPO (@thefitexpo) Come by Section M and watch the strongest people at the convention!

Do you rely on many supplements?

I pay a lot of attention to nutrition and I use supplements, but it’s mostly just getting good food. I’n 6’3″ and I eat about 3,500 calories a day. I always take multivitamins and I take some other things for my joints, I eat fish but I take additional fish oil, I take extra calcium because I don’t drink as much milk as I used to.

For every workout I take creatine. I don’t do much protein powder because I get plenty of protein in my meals, but I will use some whey protein if I need some protein. But in the United States, we have so much protein in our meals and there’s so much of it available. Even if you eat fast food, you’re probably getting enough protein.

One step at a time.

You’re the president of Mas Wrestling USA, devoted to popularizing the sport. Is that role taking up most of your work week?

It’s a portion of my day, but not my whole day. It’s basically volunteer work, I’m not making much money on that. But takes a lot of work, particularly around the championships. This year, we’re doing events in Canada, so when we have the North American championships it’ll actually be the whole of North America, which will be great.

The big thing this year is the World Cup. Unfortunately we weren’t able to go to the first stage of the event in Kazakhstan, but we’re going to the second stage in the Czech Republic and the final stage will be in Russia. 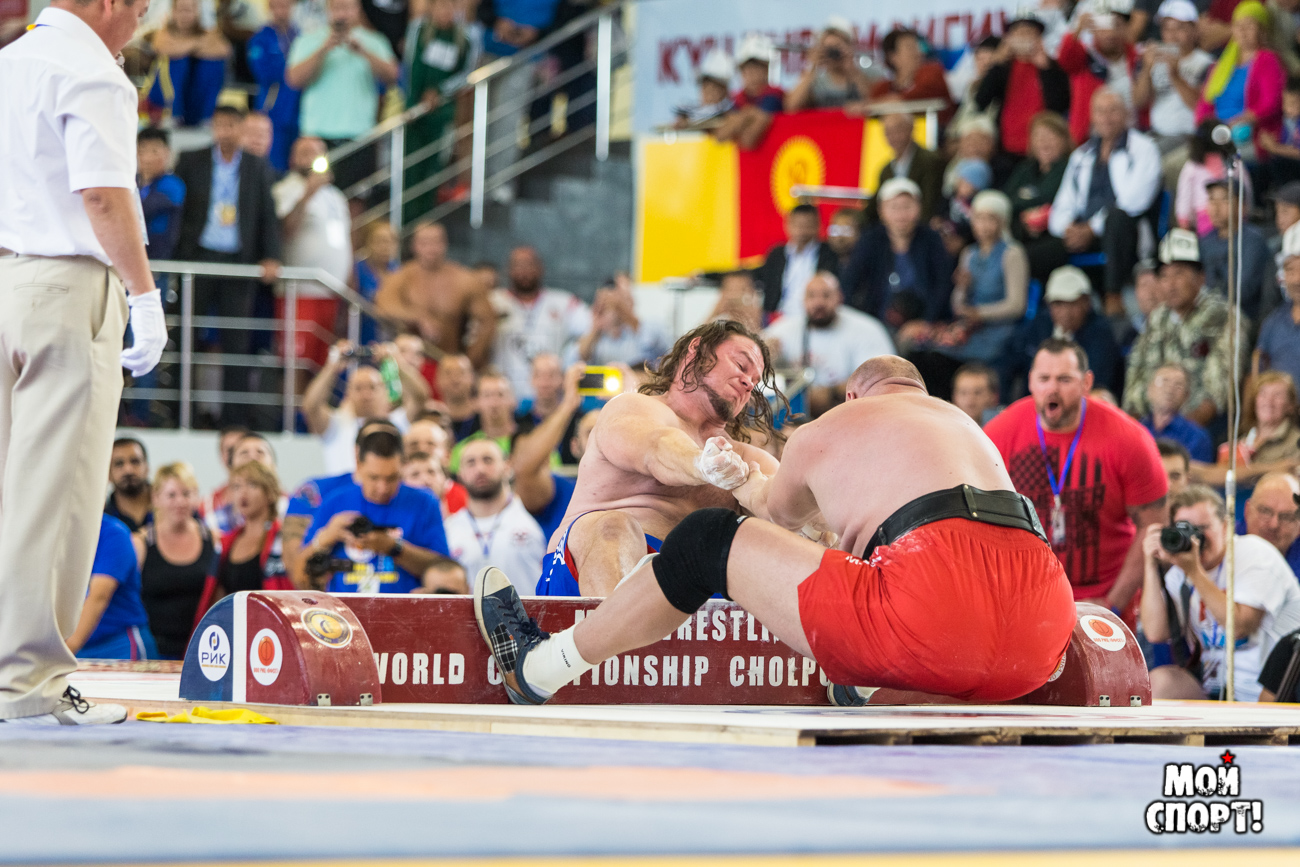 Yeah there are people who think that, but my attitude is exactly the opposite: you have to have a combat sport. If you can’t do man-on-man, go and do powerlifting. If you want to be a strongman, show that you are strongest. Whether it be pull pushing or wrestling or Mas wrestling, but man-on-man definitely should be part of strongman. Grip is rightfully becoming a bigger part of strongman because grip is more of an indication of your real strength than a lot of other things because there’s truly a lot of technique involved.

Too few strongman competitions even have a really serious grip challenge in it. It used to be they’d have farmers walks for distance, Hercules hold, things like that. You can’t pretend in those kinds of events. That’s a real test of strength.

And man-to-man combat is also the same thing. All of these come out of the same place: whether it’s strongman, martial arts, wrestling, all of these sports came out of the ancient drive to know who is strongest. The strongest guy could beat up everybody else. Or he’s so strong that nobody would take him on. 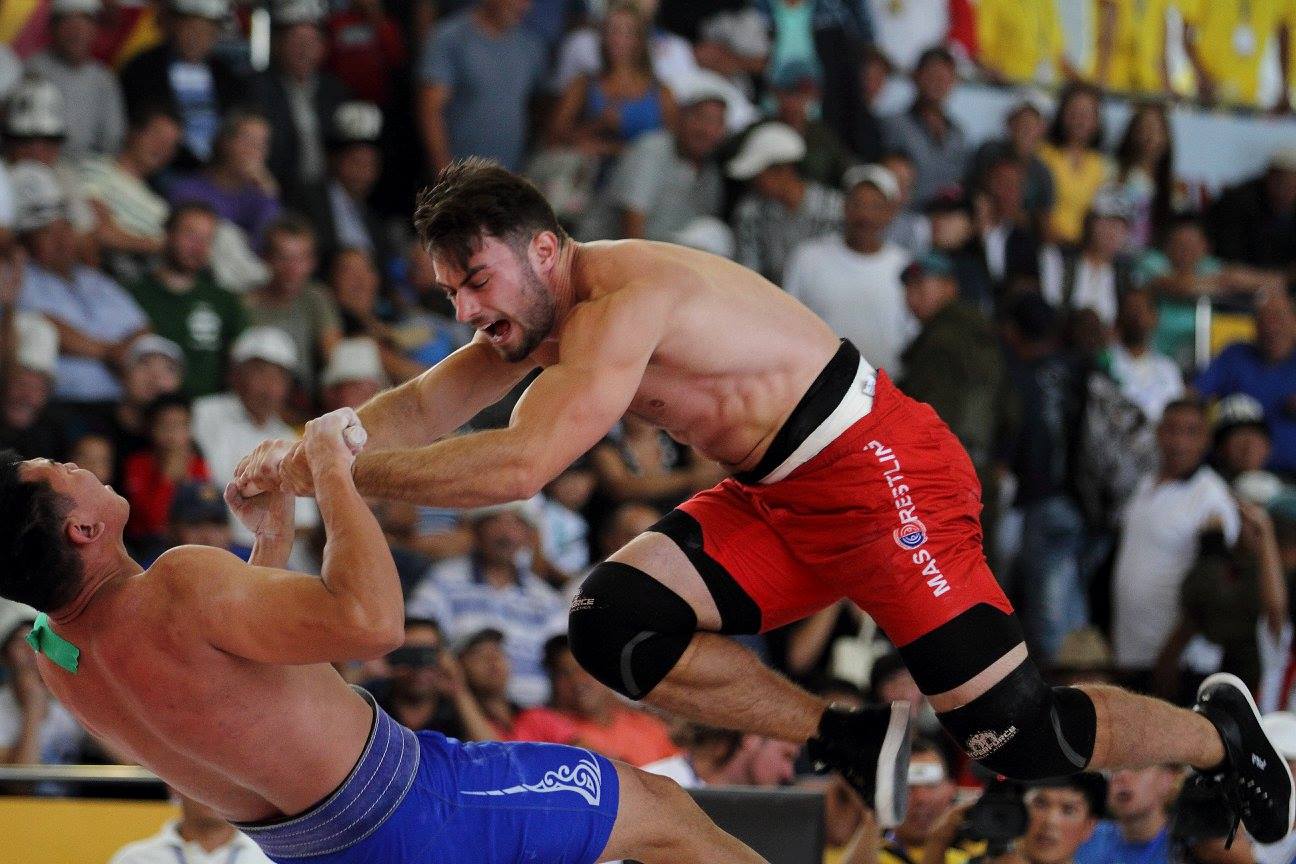 All of these sports from stone lifting to Mas wrestling to traditional wrestling, every culture has these sorts of tests. They’re either manhood tests or they’re basically saying who’s the strongest. And combat should be part of it.

People who are complaining about it shouldn’t be doing strongman, they should be doing powerlifting. They just want to stand there and lift stuff. That’s not strongman to me. There’s nothing wrong with powerlifting, I love powerlifting, it’s a great sport. But strongman is a multi-talent, multi-functional event and man-to-man combat is part of it. I looked for a lot of different ones and I came to conclusion that Mas is the best way to do it because it’s not that complicated to do and the risk of injury is very low. If you’re out of shape you’ll get injured, you’ll pull a hammie or something, but that’s more a function of being in shape or being fit. You don’t get hurt by the sport inherently, you get hurt by not being prepared.

People say, “Oh, I’m afraid I’m going to get hurt or pull a muscle or something like that.” Well, you’re not prepared to do it. That’s OK. Go home and practice a bit, work out, get in shape.

It's our grand opening this Saturday. Stop by and participate in games of strength, raffles, with opportunity to win prizes for everyone! 996 Lawrence drive #101 Newbury park ca.

Last question: What are your predictions for the World’s Strongest Man next month?

Well, obviously a favorite is Brian (Shaw), and Hafthor (Bjornsson) will be right there behind him. Want me to give you a top five? I think it would be Brian, Hafthor, and Eddie (Hall) I think will be in contention for the top three. Mateusz Kieliszkowski from Poland and Martins (Licis) will be in contention for the top five. I would be surprised if all of those guys were not in the top ten at least, and they’re the top contenders for the top five spots. I probably left someone out who’s deserving, but that’s who came to my mind first.

Great! We’ll all be watching. Thanks for taking the time.

This interview has been edited for clarity and length.