Atlas Stones Versus Stone of Steel: Why the Difference Matters for Strongman Athletes

The Atlas Stone is perhaps one of the most iconic implements in Strongman. The giant spherical concrete stones speak to Strongman’s heritage as a sport that demonstrates power and domination over all manner of odd and ordinary objects, no matter how tough and heavy the earth or man makes them. They are a cornerstone (pun intended) of Strongman, and some athletes don’t consider a competition complete without some variation of atlas-stone loading. (I really, really like stone-loading. Long arms for the win!)

The event can be performed in many ways – as is typical for Strongman competitions, there is a degree of variety. Stone-over-bar for most repetitions performed in a minute is a common variation, and the stone series is a classic (stones of ascending weight are loaded to a platform for fastest time; sometimes the platform changes height with each stone load). This year saw a major addition to the classic event, with the introduction of a metal plate-loading stone designed by Michael Bartos of MB PowerCenter, called appropriately, the Stone of Steel.

The Stone of Steel has some advantages and disadvantages that make it very different from a traditional atlas stone. From a gym-owner’s perspective, it minimizes the amount of cleanup and maintenance required – they are not designed to be used with tacky (I am sure someone somewhere does, but it’s not the norm) and thus you may have access to it in a facility that would never allow the mess of tacky and concrete debris. The plate-loading feature means you also do not need as much room to store it. They are available with 17 inch and 20 inch circumferences. These different features may make it beneficial to someone looking to add a stone into training but without the resources to make or buy multiple concrete stones.

But here are some big differences when it comes to training and competition performance that should be considered by anyone trying to decide how to program them or which to choose for a contest.

Most athletes can lift heavier weights with traditional stones versus the Stone of Steel (SoS). The SoS is powder-coated steel and contests rarely (if ever?) allow the use of tacky (a sticky substance competitors use on their arm to assist in grip), so it can be harder to pick than a concrete stone. This means that even at a high level competition, the actual weights will likely be lighter with an SoS than a concrete stone – it requires even more grip and squeeze through the entire arm.

I have heard the argument that this takes away from the events a little, because going heavy is the whole point of the sport. I think a case can be made for the impressiveness of both, but it does certainly sound more impressive to say “I picked and loaded a 400 lb stone” than “I picked and loaded a 330 lb stone of steel.” Experienced Strongmen and women may understand the difference of course, but from a performance perspective, the traditional stone can be more impressive even if the SoS is more technically challenging in some regards.

Because the Stone of Steel is a recent invention, they can be hard to find if you can’t afford to buy one yourself. Traditional atlas stones are currently more widely available at Strongman gyms and Strongman-friendly facilities around the United States. If you are promoting a contest and you want it to be relatively beginner friendly, the traditional stone might be a wiser choice, because more gyms have them.

3. Technique: The Pick and the Load

The slippery nature of the SoS presents some technique deviation from traditional stones. Due the increased demand on one’s grip during the lift on the SoS, it is important to get as much of your arm in close contact with the stone as possible, which typically means a little more bicep flexion and thus an increased demand on the biceps.

“With a traditional stone, with tacky especially, I am pretty much straight-armed; I pinch my forearms in. But on the Stone of Steel, I have to scoop a little bit more, I do have a bit of a bent arm…I point my elbows out a little bit.”

This allows the athlete to get more body-to-stone-contact and thus apply more pressure to the stone. 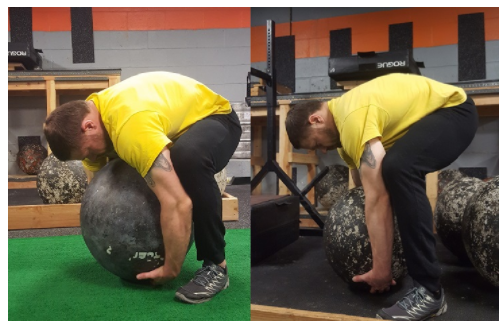 Canter demonstrating the difference in arm positioning during the pick on the SoS and a classic stone.

Additionally, due to its slick surface, it is prone to slipping during the load, so the athlete must reposition their arms to keep the stone in contact with their body during the load:

“During the [traditional] load, my hands come over the top of the stone, if my hands were a clock, they are at “11” and “1”. With the Stone of Steel, I have to come more to the sides, so closer to “3” and “9” on the clock.  Because of that position, it is a little more of a challenge on the extension.”

Chad explained that with a traditional stone-load, having one’s hands in the “11 and 1 o’clock” position allows the arms and back to pull directly upward, which is less effective with the SoS because of its slick surface. The hands have to come lower to prevent slippage during the load.

For some of us, the gritty DIY feel of Strongman as a sport is half the fun. We don’t want regulated equipment, we don’t want to know exactly how each implement is going to feel – we want dynamic challenge and out of control variables (well, some of us do). The down and dirty aesthetic is part of its charm. The SoS is a very smart, very cool implement, but for many it just does not feel as satisfying as loading an actual rock. And on the flip side, some people really hate tacky, and for contest promoters and gym owners, the chalk-only approach of the SoS has serious appeal. 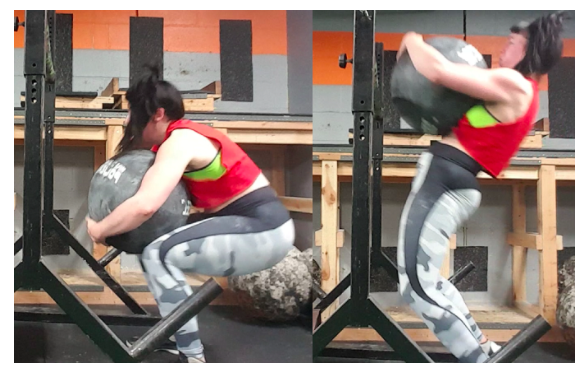 Stones typically have 20-50 lb weight jumps. Obviously that can pose some problems when programming it, and the SoS has the answer to that problem. It’s plate-loading capacity means you can work at much more specific percentages and thus become more specific with your programming.

I really love traditional stones, though I can appreciate the challenge of the SoS. Additionally, training the SoS has absolutely improved my classic stone load. Working with it has improved my ability to squeeze through my forearms and hands, increase tension in my whole body before the pick, as well as force me to increase my hip drive and extension through the load, which has done wonders for my traditional stone load.

Whichever you prefer, there are many benefits to training both, and it is part of why many people are flocking to this great sport – technical challenge, raw fun, and sometimes dirt.