12 Great Exercises to Warm Up and Activate Your Glutes

How many lifters have encountered a similar scenario to the one below?

You’re at work all day sitting down and hit the gym after to squat, or perform any lower body work. It’s a heavier day and you have planned percentages to hit, but you can’t seem to get your legs feeling ready. Your mechanics feel off at the hip and you lack your normal power out of the hole of the squat.

Possible mobility issues aside, you may be falling victim to glutes that are lacking a proper warm-up. This then causes the glutes to lack their full potential during lower body exercises, aka misfire. Inactive glutes can then shift force into the knee and lower back muscles, which tend to be common issues with our always seated population.

The glutes are made up of three primary gluteal muscles including the gluteus maximus, medius, and minimus. Combinations of these muscles are prime movers in hip extension and play an important role in producing force in lower body movements.

In general, the gluteus maximus is the prime move for hip extension, while the glute medius works in synergy with the maximus. The medius also works with the minimus to produce abduction of the hip.

Before diving into the movements, it can be helpful to go through the glute activation checklist below. A key to efficiently warming-up the glutes is to prep the muscles around the glutes as well, which help support proper hip extension. 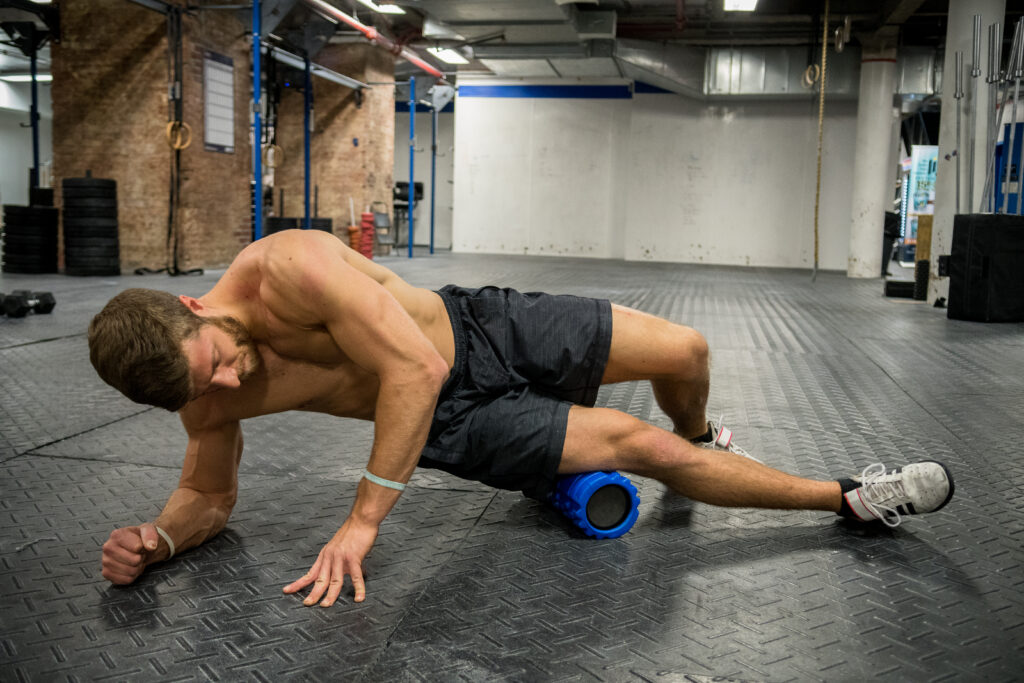 When creating a warm-up it’s important you select movements that you find your body needs most. This article isn’t geared to make you perform all 12 movements every workout, but to give you ideas for exercises to add into your existing, or lacking warm-up.

Glute Bridge: Lie on your back with your shoulders somewhat packed. Plant your feet at a 90 degree angle and raise the hips to the sky with your feet remaining flat while thinking, “squeeze the glutes together.”

One-Leg Glute Bridge: This movement has a similar initial setup to the regular bridge, but will entail you maintaining a tight core along with your bridge motion. You can perform these with a straight or bent raised leg. Avoid letting the hips dip to one side.

Clam: Lie on your side (I prefer to bring my arm up for support) and bring your knees to 90 degrees at the torso. Focus on raising the leg while maintaining contact with the feet.

Modified Clam: This movement’s setup is similar to the regular clam, but you’re going to extend the leg that’s making contact with the floor and raise the top leg in a clam-like motion.

Reverse Glute Bridge: Bring the hands under the shoulders and turn the hands in whichever direction is most comfortable for you (mobility issues can come into play here). This movement is similar to a glute bridge, but you’re opening the shoulders as well. Stay on the heels through the whole bridge motion.

6. Side Plank With Dip

One-Leg Side Plank With Dip: Achieve a side plank position and slowly let the hip sag maintaining a straight arm and leg. As you raise up from the dipped position think about squeezing your glutes, then raise your top leg with a full glute squeeze to maintain your sideways posture.

Donkey Kickback: Get into a quadruped position and maintain a tight core while raising one leg to the sky. Focus on only allowing the glutes to elevate the leg and not the lower back.

Resisted Donkey Kickback: Grab a light resistance band and bring it around both wrists or under both hands. Wrap the band around your mid-foot and kick back with a slightly flexed leg focusing on making the glutes the prime mover.

Bird Dog: Maintain a hollow quadruped position, engage the core, and extend the opposing arm and leg. Think about squeezing the glutes and core to maintain this position.

Air Squat with Thrust: Perform a normal air squat with a slow eccentric tempo (lowering phase) and force the knees out, while thinking about sitting back into the glutes. As you stand think about contracting the glutes and finish the movement by squeezing them in a thrusting motion.

Glute External Rotation: Stand in an athletic stance with your knees bent, toes slightly turned out, and your torso forward with the feet flat. Without moving your hips, think about externally rotating the leg and only using the glute to do so. This movement should start at the hip, not the knee.

Monster Walk: Strap a mini band around your ankles (or above the knees) and maintain an athlete stance while stepping sideways. Focus on forcing the hips back and initiating the side step with the hip/glutes, then control the second step by pushing weight into the hips.

Activated glutes are only one piece to the puzzle of successful lower body days. They’re the prime mover in hip extension and play a major role in producing force at the hip. Design a warm-up and workout that encompasses your needs with a variety of movements.

If you don’t know where to begin I would suggest giving all of these exercises a try and seeing what works best for you in your warm-up. After all, there’s more than one way to skin the cat when it comes to prepping your body.