There are events in Strongman that even the casual fan or strength sports enthusiast is familiar with: deadlifts of course, yoke walks, farmer carries, stone loads, circus dumbbell, and log press are probably some of the most well known tests of strength. But do you know what a Fingal’s Finger is and how to train it?

Part of Strongman’s charm, both for some participants and fans, is its variety. No one Strongman competition will be exactly the same, although there is a rough format.

Typically, amateur and Pro Strongman competitions will feature 5-7 events (usually 5), and each event will test a different component of strength. There is almost always an overhead, a deadlift, some type of heavy carry, a lighter carry or multiple object carry, and a loading event. A common set up for a regional strongman comp might be:

-Car Deadlift for reps in a minute – most reps wins

Those are all very classic Strongman events that even a casual fan is probably vaguely familiar with.

But every so often, promoters get creative, and we see either odd throwback events or seemingly totally made up new events.

Personally, I really enjoy having strange events thrown in the mix, because while it can make training that much more challenging, it is a testament to the spirit of the sport: finding out who is the strongest all around athlete.

Let’s look at a few less common Strongman events. I have included some possible training methods for these various events with coaching advice from Chad Canter of Power NYC (he currently programs and coaches 4 Pro Strongmen and women).

This is a really eye-popping event brought into the mainstream by World’s Strongest Man that was recently brought into amateur Strongman courtesy of the United States Strongman Federation at their 2016 Nationals.

It is a test of overhead strength, endurance and speed.

The first part of the movement is essentially a clean to front rack pressing position – then the implement must be pressed or jerked into locked out arms, and the athlete walks/pushes the “finger” into an upright position before flipping  to the other side. This can be done with one set weight for max reps in a minute, or increasing weight like at WSM.

I asked Pro Strongwoman Caitlin Yuhas about her own training:

“Now with an event like a Fingal Finger…Much like loading events, there’s a rhythmic component to completing each repetition. Clean, dip, jerk, walk, run around…clean, dip, jerk, walk, run around…maybe it’s the dancer in me, but these tasks feel like choreography and in that sense I can efficiently and methodically keep plugging through them for as long as I need to. “

How would she train them if she didn’t have access to the actual implement?

Well, if you have Fingers at your gym, like I do, you are a lucky duck!

-Keep your sets in the 30 sec to 45 second range and go for max reps in that time constraint, keep rests under 2 minutes

If you DON’T have access to a Fingal’s Fingers, it will be very difficult to work the mechanics of the movement on anything else. You could try:

-Tire Flips – If you don’t know how to power-clean, tire flips require similar lower and upper body power to the Fingers.

These events are brutal strength, grip, and pain tolerance events, with slight variations that might make it more difficult depending on the individual biomechanics of the athlete.

Perhaps the most visually dramatic, the Hercules Hold is when the athlete stands between two weighted objects that they are trying to hold up in place; the weights pull on the athlete laterally, one to each side of the athlete’s body. I have never participated in this particular event, but I bet it is BRUTAL. 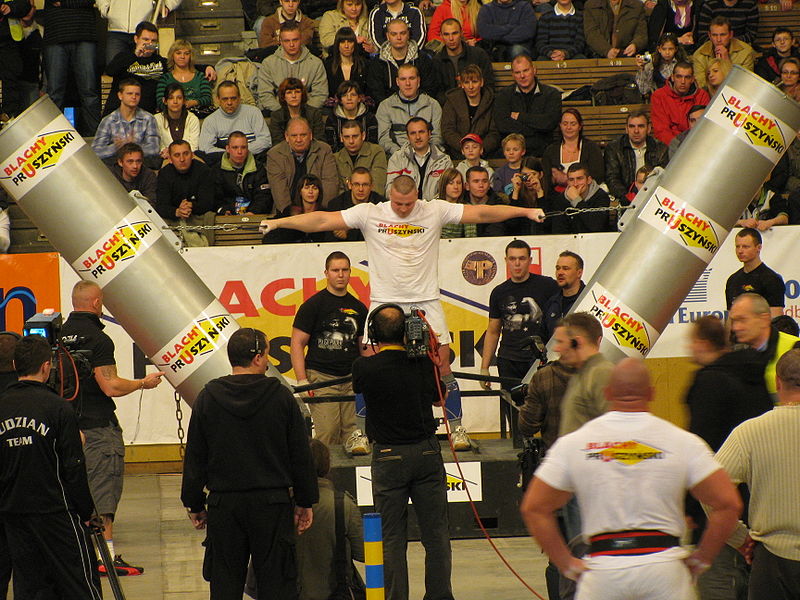 In the Front Hold and Crucifix Hold the athlete stands with arms either straight out in front of them, or straight out to the side, trying to keep the arms perfectly level and straight. The athlete is often placed against a wall for stability. Personally, I think these events may favor an athlete with shorter arms: the farther away the weight is from your center of gravity, the heavier it will seem.

Farmer and Frame Holds are very similar: the athlete picks up either two farmer handles or a frame and holds it as long as they can.

These events, while of course strength dependent, are also about mental toughness and pain tolerance.

So how do you train holds?

Just hold it as long as you can! Just kidding, that will wear you down mentally and physically really fast,try…

-Gradual weight % increase based on your max or comp weight

Keep the sets moderate and the rests short in order to accumulate volume that will carry over to a max distance. This will build physical(as well as mental) endurance and strength.

For example, when we trained Farmer holds, we would do

Weeks 2, 3, 4 etc would increase the weight by % of what MY max was roughly, not what competition weight was. This way I was still training within reasonable strength parameters and not needlessly frying my system. This approach allowed me to be very consistent week to week.

[On a personal note, this approach worked great for me – I won the Farmer hold over 7 other competitors, the weight was 155/a hand (I’m a Middleweight female competitor) and my time was around 2:25].

There is a tendency with strongman event training to just try and go heavy all the time, but event training can be just like regular strength training; it needs to be tailored to YOUR strength levels and gradually progressed.

This one is pretty familiar to strongman competitors, but perhaps less familiar to outsiders. The Husafell carry is an homage to an Icelandic tradition from, you guessed it, the town of Husafell. According to Wikipedia:

“The stone weighs roughly 190 kg (418 lbs) and is kept near a goat pen built by pastor Snorri Björnsson over two hundred years ago.

The stone has been used as a test of strength by either simply lifting the stone, or by lifting and carrying the stone around the goat pen where it is located.”

Many versions the stone have been built since, and it is typical to see a coffin shaped metal box (that can be loaded) used, rather than an actual stone. 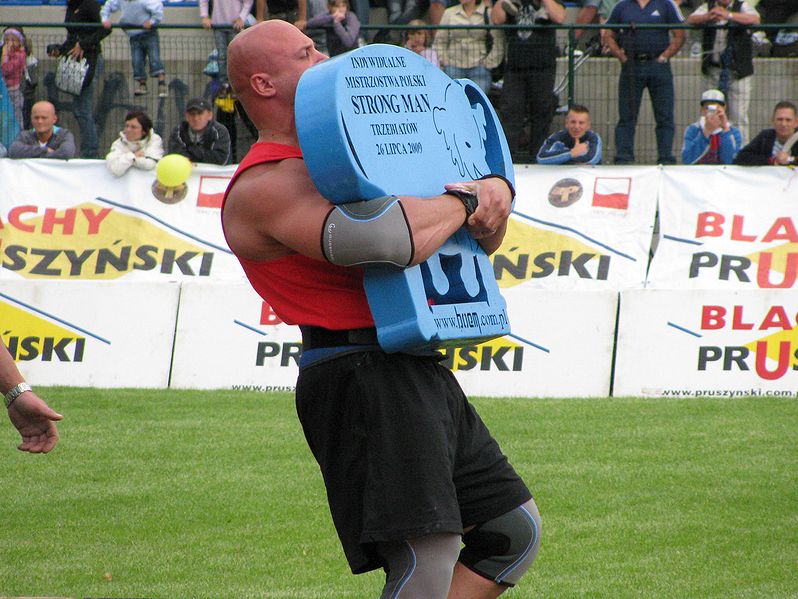 The Husafell stone carry is almost always a max distance carry. Just like holds, max distance events are unforgiving mental and physical pain endurance tests. The Pros agree that these events go beyond the physical.

Pro Strongman and Arnold Pro newcomer Zach Hadge is a compelling figure; he is about to go head-to-head with the likes of Brian Shaw and Hafthor Bjornsson after competing UP a weightclass last year to win the Heavy Weight Men’s Amateur division at the 2016 Arnold Classic, after previously competing as a Middleweight and winning his Middleweight Pro Card in 2015.

“I personally like max distance or endurance events. It’s all mind over matter. I have definitely trained for an event like that by going all out in training and seeing what my threshold really is, but now that I am a bit more advanced, I have a good idea at where that threshold is, and won’t reach that point until game day. I’ll play around with many sets that come close to reaching that point, but these days, I won’t go there unless it is absolutely necessary. And then it will be there.”

Sometimes the Max distance will be done with a keg, sandbag, or other odd object. Caitlin Yuhas added,

“Max distance events are challenging for me – not necessarily due to lack of strength or endurance, but because I’m still mastering the mental game of them. There’s a certain level of discomfort you simply must accept in order to win these events (especially at the highest levels of competition), and sometimes my brain tells my body to stop when I know damn well I’ve got more in the tank.”

-Light weight to start with gradual increase over the course of the training cycle, similar to other strength events. Estimate rough training max, base weight off of that.

Like the hold events, this is a physical AND mental endurance test. Rather than draining yourself every event training weekend by always going for a max distance, break up your carries into 4-8 rounds of 50 to a 100 feet, and keep your rests under a minute. This will tax your aerobic system heavily too, which is crucial. If you want more challenge, you can go for a max distance on the last set, just like the holds.

Hadge gave me some more insight into his training routine on max distance:

“I train max distance events by doing multiple work sets per week (probably once per week on a given event), that feel like a 7 or 8 out of 10 (10 being complete failure). Each week the sets, reps/time, and weight will vary, getting closer to comp weight each week (starting on the light end with more volume and going heavier than the previous week). When I am about 2-3 weeks out, I will do a set that is definitely flirting with failure, but even then, fatigue is high and emotions are low in comparison to what I will be feeling like on show day.

After that last session I can usually formulate a good idea on how far I should be able to physically go, and then I’ll formulate an even crazier idea on how far I will be able to push based on arousal levels I have been able to reach in the past. For me, it’s hit or miss. I either do something that I formulated in my dreams, and even I will be surprised, or I will be just off and come game day I won’t be ready. Sounds risky, but I’ll bet on myself every time.”

These events are a far cry from weightlifting or powerlifting meets and in my opinion, are what make Strongman so special – unpredictable and hard to train tests of physical and mental endurance as well as strength. There are more odd and challenging events than just these three variants – sound off in the comments and let us know your favorites!