Universal Nutrition is a stalwart in the world of bodybuilding. It’s been around for forty years and they put out dozens of different products, including nine different kinds of amino acid supplements.

We previously tried out their Juiced Aminos, which is part of their Animal line of supplements, but today we’re looking at Universal’s BCAA stack. What’s it stacked with?

We picked up the Grape Splash flavor. There are no calories, carbs, or fat in a scoop of BCAA Stack. Mostly, it’s just five grams of branch chain amino acids: 2.5 grams of leucine and 1.25 grams each of isoleucine and valine. That’s a 2:1:1 ratio, which is pretty common.

The only other main ingredient is the 2.75 grams of glutamine.

The branch chain amino acids leucine, isoleucine, and valine have been linked to improved muscle retention, endurance, and focus during workouts.

I was a little surprised to find aspartame on the ingredients list. It’s the first BCAA supplement I’ve tried that contains that artificial sweetener, which is also sold as Nutrasweet™ and Equal™.

It’s almost certainly safe; the FDA called it “one of the most thoroughly tested and studied food additives the agency has ever approved” and says its safety is “clear cut.” But after a few rodent studies showed a potential link with cancer, the public turned against aspartame and it was removed from many products.

Those rodent studies weren’t perfect and they used way larger doses of aspartame, relatively speaking, than you’ll find in any products made for humans. But this didn’t stop some huge companies from pulling it from their product line.

Again, it’s probably safe. But it’s probably the most controversial artificial sweetener of all time, so you should know that it’s in this product.

There’s not much else to say about Universal Nutrition’s BCAA stack. It has almost three grams of glutamine, which some have linked to improved muscle growth, but most of those studies have been on people who have a critical need to grow new tissue, like burn victims. On regular people, there’s not a ton of evidence that it helps build new muscle — most of it probably gets stored in the gut. Still, it’s inexpensive and it may improve gut health. In any case, there’s no evidence it’s bad for you, since it’s the most abundant amino acid in the body.

Note that the grape flavor doesn’t have artificial flavors but it does have artificial colors and aspartame, plus it’s made on equipment that processes milk, soy, egg, peanuts, fish, shellfish, and wheat. If you’re very allergic to these foods, you may want to steer clear.

That’s pretty cheap. In my opinion, a well-priced supplement is about 11 cents per gram of BCAA. There are cheaper competitors — like Scivation Xtend, which also has extra B-vitamins — but I’d consider BCAA Stack to be reasonably priced.

I tried the Grape Splash flavor. Unlike a lot of BCAAs, this wasn’t particularly sweet or sour. It tasted like grape-flavored candy — which is what I expected — but I found that the product had a slightly bitter aftertaste. I never thought I’d say this, but this BCAA product should probably have been more sour to help cover up the natural taste of the BCAAs.

Universal Nutrition’s BCAA Stack is inexpensive (but not very inexpensive), tasty, and seemed effective. There’s not much in the way of extra ingredients and it’s not exactly free from controversial ingredients, but it’s cheaper than a lot of products and it doesn’t contain the popular artificial sweeteners sucralose and acesulfame potassium. If you’ve been looking for an alternative that tastes decent, this isn’t a bad pick. 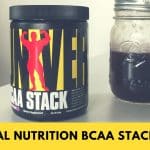