Diabetes and Strength Training – What You Should Remember

This article does not constitute medical advice. Please see your licensed medical physician for information about how best to manage diabetes in your individual case. It’s always a good idea to talk to your doctor before starting a new diet or exercise regimen.

There are a lot of misconceptions surrounding diabetes. Perhaps the most persistent, at least in the world of strength sports, is that people with diabetes should avoid lifting heavy and stressing their bodies as much as other athletes.

The truth is that exercise, including intense exercise and strength sports like powerlifting and weightlifting, can be appropriate and even recommended for patients with the disease. (Just ask Matthias Steiner, an Olympic weightlifting gold medalist who was diagnosed with Type 1 diabetes at eighteen.)

When it comes to managing the disease, a lot of recommendations are similar to those made for the general population: eat plenty of vegetables, get plenty of exercise, keep your body fat low, avoid sugary foods.

But exercise also affects blood sugar, which is why there are a few things to keep in mind if you have diabetes and you want to try out powerlifting or weightlifting. 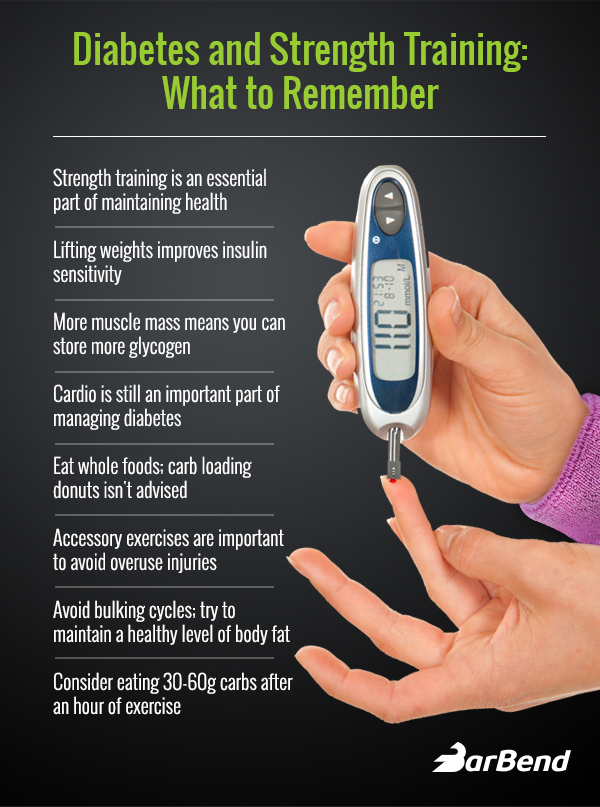 “Exercise is going to make your cells more sensitive to insulin over the long term, so they’re going to do a better job of taking up glucose and using less insulin,” says Amanda Kirpitch, MA, RD, CSSD, CDE, a dietitian practicing in New York City. “So there’s always going to be benefits from exercise.”

For a period of two to seventy-two hours after exercise the body does a better job of using insulin, which is why insulin needs are generally lower in people who exercise regularly. (Though these benefits can be diminished by overeating.) 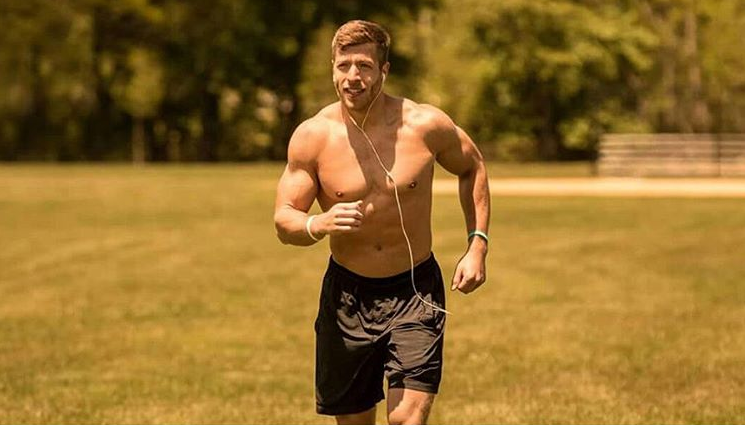 But Don’t Cardio and Lifting Put Different Demands On the Body?

Yep. For people with diabetes, the main thing to note is that intense lifting can cause a temporary increase in blood glucose levels, compared to cardio training which usually causes a decrease.

“The biggest difference between powerlifting and cardio is the impact on glucose levels,” says Kirpitch. “There’s often a rise in glucose that people don’t anticipate when they do anaerobic activity, strength training, things of that nature, compared to running. People assume that any exercise is going to result in lower blood sugar, and they then come out of an anaerobic strength workout and they have no understanding to how that manifests. So it’s a very different type of situation.”

So what should you do before, during, and after a workout to maximize benefit and minimize risk? It depends on your potential for low and high blood sugar, which varies by patient.

“If you’re not on insulin, the target blood glucose can be lower before starting exercise,” says Kirpitch. “But if you’re on insulin, you probably want the blood sugar to be at least over 100 for powerlifting and weightlifting, even 120. It doesn’t need to be as as high as it needs to be for cardio, because with lifting the blood sugar is likely to rise.”

Whether and how much your blood sugar increases from lifting weights depends on how well-trained you are — the newer you are to lifting, the more likely it is to rise during or immediately after a workout due to counter-regulatory hormones. If you are newish to lifting and you’re working out an hour or more, it might be a good idea to consume thirty to sixty grams of carbs after an hour of work. A cardio warm-down can also help to stabilize blood sugar.

“Powerlifting and weightlifting result in benefits that are directly related to the type of activities these are,” adds Dr. Colberg. “In general, having a greater amount of muscle mass is beneficial because it increases the size of the ‘muscle tank,’ or the primary place we have to store carbohydrates in the body as muscle glycogen. Gaining and keeping as much muscle as possible over a lifetime is beneficial to blood glucose management. Keeping the muscle tank partly empty due to recent activity also increases insulin action. So doing intense activities like powerlifting use up a lot of muscle glycogen, and insulin action will be increased during the time it is being replaced post-exercise.”

That said, people with diabetes are also more prone to overuse injuries, so it’s particularly important for them to do accessory exercises and not perform the exact same heavy workouts every week. But as far as training frequency and intensity, people with diabetes don’t usually need to train very differently to people without it unless otherwise indicated by their doctor. 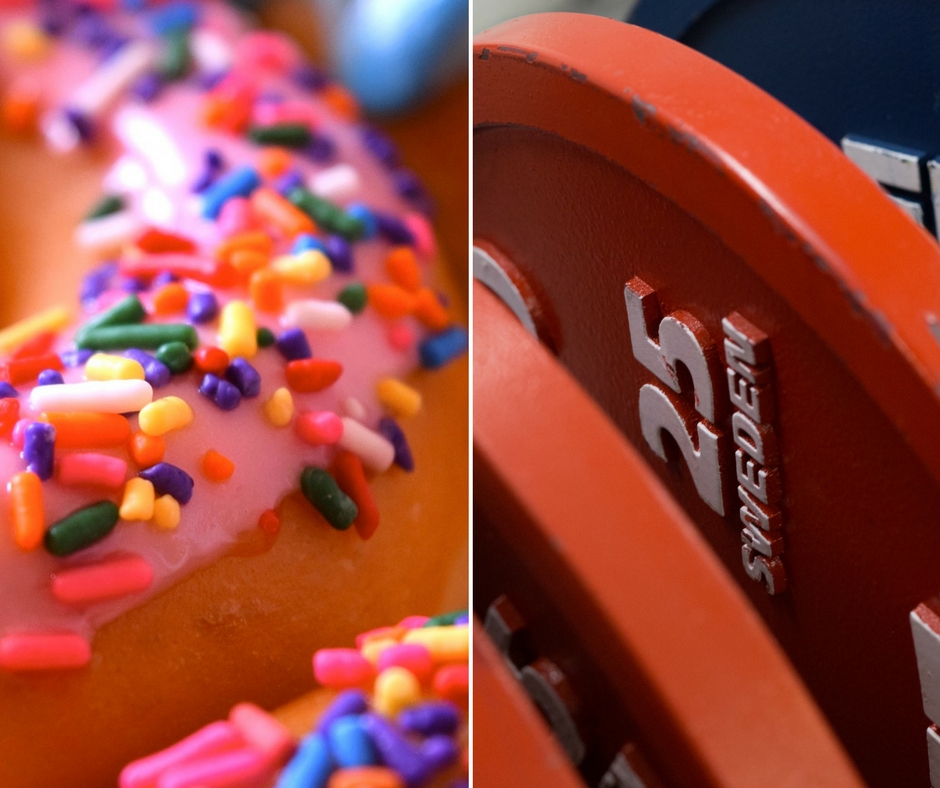 So what about on the day of a weightlifting or powerlifting meet? When you’re pushing your body to its absolute limits and your max lifts are being spread out over a period of hours, is there anything different about how you should approach things?

Kirpitch says preworkouts like caffeine, BCAAs, and l-arginine are fine and shouldn’t have a big impact on blood sugar, but she advises against the old crush-a-box-of-donuts strategy.

“You’re always going to be better off with a more balanced intake, pre-workout and throughout the day. High carb is good, but you want to balance that with protein if you can and fat if you can tolerate it, because that’s going to give you a slower rise in glucose. You’d be better off getting a rise that lasts longer, because if glucose rises rapidly, there may be a mismatch with insulin in which case you may dampen your performance.” 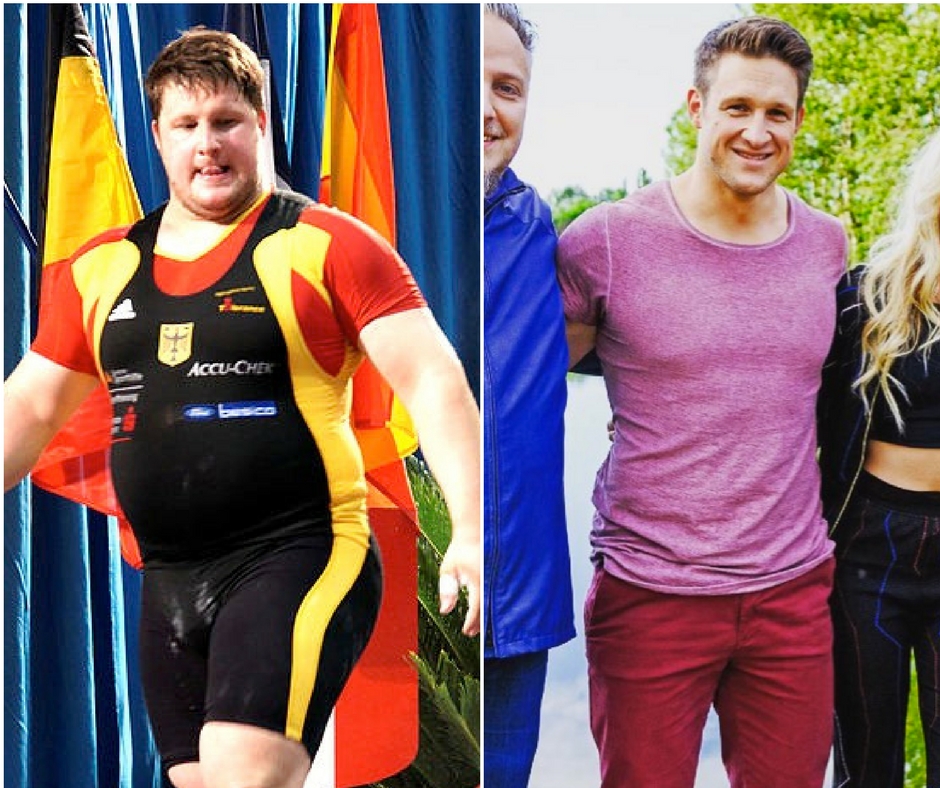 She also notes that while some powerlifters happily gain significant levels of body fat so as to increase their strength and move up weight classes, this isn’t a good idea if you have diabetes as the disease confers a higher risk of cardiovascular disease.

“There’s no doubt that the overweight fit person is in better health than the person who’s overweight and not fit,” she says. “But you don’t want to increase your body fat significantly, especially if there’s a lot of weight cycling. We would argue that nobody should be doing that. Carrying extra weight may increase joint issues and other health problems, even if you’re fit.”

It’s also strongly recommended that in addition to lifting weights, you engage in some sort of cardio to keep the heart healthy. A lot of lifters shun steady state cardio for fear it will “eat their muscle,” but that’s a powerlifting rule you should break — it’ll improve your recovery between sets, help keep up cardiovascular health, decrease soreness, and promote blood flow to repair your muscles. 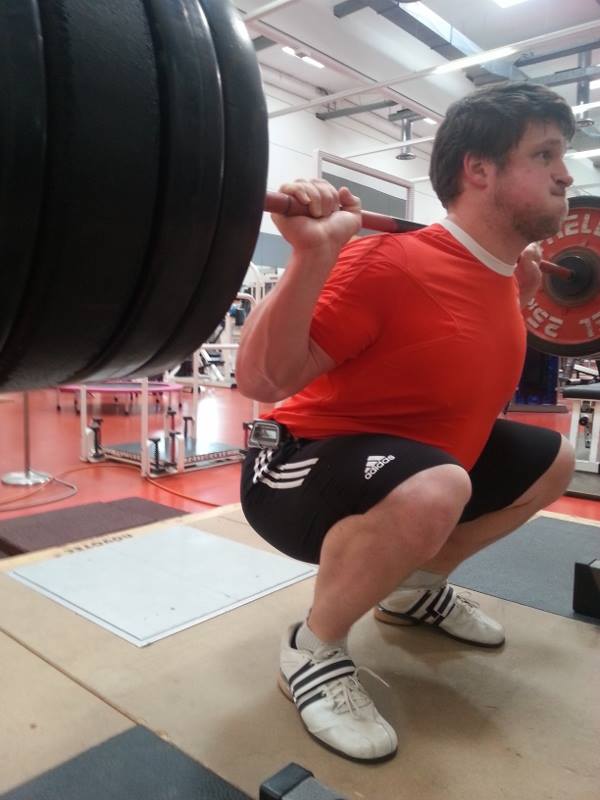 Do These Rules Change for Type 1 and Type 2 Diabetes?

There are a lot of differences between the two types of diabetes, but when it comes to strength training, much of the advice remains the same in either case.

“Type 1 diabetes just requires more vigilance to keep blood glucose levels balanced with regards to insulin versus food intake,” says Dr. Colberg. “Type 2 is usually easier to manage with exercise, but a lot of those people are older and have other health issues to deal with as well.”

Again, there are plenty of differences, particularly with regard to insulin dosage, but lifting heavy weights is beneficial in either case and training recommendations don’t change.

“People with Type 2 are optimizing their muscles, and building muscle and losing fat, so they’re going to have more insulin sensitivity, which is great,” says Kirpitch. “And there are a lot of arguments and papers starting to come out on strength training being so important for patients with diabetes — Type 1 and Type 2 — because that’s a part people forget and they often end up just walking, but strength training is critical. Changing the muscle composition and changing the body composition through building muscle is huge, it matters a lot.”

When it comes to diabetes and lifting weights, nutritionists will give a lot of the same advice whether or not you have diabetes: don’t overtrain, eat balanced meals, keep your body fat low. The main thing to take into account is to avoid overuse injuries, maintain a cardio habit, and avoid the donut plate on meet day.

But as is absolutely always the case, speak to your doctor or a diabetes educator before starting any new diet or exercise regimen.

Thanks to Barbie Cervoni, RD, CDE, for her help putting together this article.