George Hackenschmidt: The Father of the Bench Press and Hack Squat

George Hackenschmidt, like Milo Steinborn, was a strength pioneer who had a huge influence on the way we lift. While Steinborn is often considered one of the founding fathers of how we squat today (the Steinborn Squat), Hackenschmidt is usually credited as the originator of the bench press and hack squat.

The bench press has become an upper-body staple in most workout programs, while the hack squat is a common lower-body accessory. George Karl Julius Hackenschmidt helped establish and popularize both of these movements. His popularity at the time, and his love for writing books, helped spread the word on both of these movements. 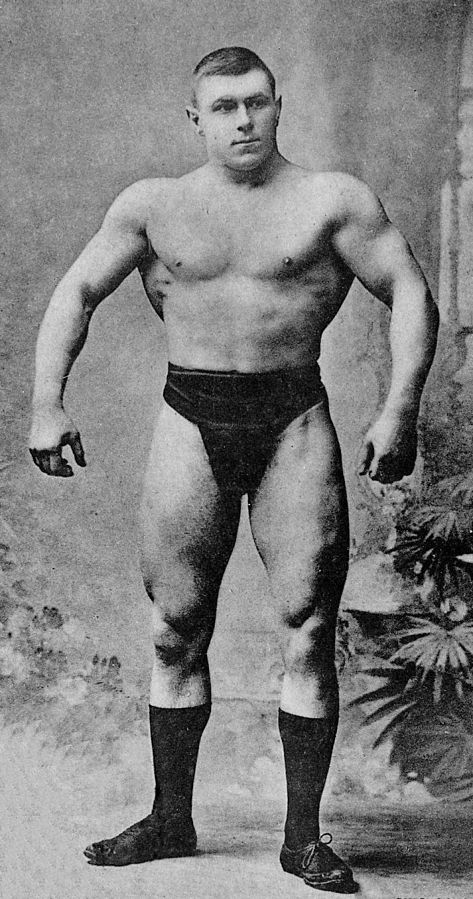 Hackenschmidt, “The Russian Lion,” was an early 20th century Baltic German Strongman and professional wrestler. He was born on August 1st, 1877 and grew up in the Governorate of Livonia, which at the time was ruled by the Russian empire.

Like many strength athletes, Hackenschmidt started his love for physical training at a young age. In high school he became fond of cycling, swimming, jumping, gymnastics, and weight lifting. His high school tenure was filled by wowing his teachers with impressive feats of strength. While in school he performed strength feats such as pressing 200lbs overhead and lifting a small horse off the ground.

In 1895, Hackenschmidt graduated and left for the town of Tallinn (known as Reval then) to work for the Lausman Factory, which was a large engineering firm. After moving, Hackenschmidt joined the Reval Athletic and Cycling Club. He was originally an avid cyclist and won many competitions doing so, but when the colder seasons came about his attention turned to weight lifting.

At a Club Festival in 1896, Hackenschmidt’s strength truly began to gain attention. He performed the following lifts below to the astonishment of the festival’s crowd and fellow athletes.

From his book, The Way to Live, he also wrote, “With one hand lifting weight slowly from the ground (by the strength of the biceps) I raised a weight of 125 lbs with the right hand, and of 119 lbs, with the left.”

Soon after in 1896, Hackenschmidt made the acquaintance of a professional wrestler named Lurich who was on a tour with his small company. Lurich would leave open invitations for all comers to partake in wrestling him. Hackenschmidt was one of few of his few peers who stepped up to wrestle, but he didn’t have experience and ended up barely losing. After the match, Hackenschmidt realized Lurich was a rare equal in his level of strength.

This realization and loss frustrated Hackenschmidt and sparked a more intense career in wrestling and strength. In July 1897, Hackenschmidt set an overhead press world record with 243 lbs. In addition to his 243 lb press, he writes in his book, “With my hands crossed behind my back and my knees bent, I lifted a ball weighing 171 lbs.” He also performed two overhead presses with 94 lb balls by taking them from the ground with swing and finishing in a press.

In January 1898, Hackenschmidt had improved his overhead press to 275 lbs. It was also at this time he performed one of the first ever floor presses. He writes in his book, “Lying on the ground, I lifted and pushed up with two hands a weight of 304 lbs, following this soon after with a weight of 335 lbs.”

Hackenschmidt’s floor press, also known as a wrestler’s bridge, helped spur the growth of the floor and bench press. At the time, Hackenschmidt didn’t realize the influence he was leaving on the lifting community, as the bench press wouldn’t reach mainstream lifting until the 1930s.

In April 1898, Hackenscmidt would experience one of the most pivotal points in his strength career. The Reval Athletic Club held a weightlifting competition, and he took first. Hackenschmidt jerked 114kg (251 lbs), which at the time was only 1kg less than the world record. He also snatched 256 lbs, jerked 231 lbs, and pressed 269 lbs in his right hand.

For six months following his club’s meet, Hackenschmidt trained heavy weightlifting with the club’s on-site doctor, Dr. Von Krajewski. One of Hackenschmidt’s biggest feats of strength during this six month training period was breaking Eugen Sandow’s 116kg one handed press record with a 122.25kg press. Through the years of 1899-1901, Hackenscmidt would continue to wrestle and train heavy weightlifting.

On January 27th, 1901, Hackenschmidt would find himself at another pivotal point in his weightlifting career. It was at this time Hackenschmidt would leave another legacy on the lifting world. He established a new world record by lifting 187 lbs behind his back with bent knees. This feat would soon be called the hack squat, which we still use in training today.

At the time of Hackenschmidt’s newly established “hack squat” record, he would also go on to claim the iron cross record. In his book, he writes, “With arms extended, I held 90 lbs in the right hand and 89 lbs in the left.”

From 1901 to 1911, Hackenschmidt’s career involved 3,000 wrestling wins, countless educational lectures and books on physical culture, and of course, some of the most extraordinary feats of strength ever witnessed.

In 1911, Hackenschmidt finally retired from the wrestling scene. After his long wrestling career subsided, Hackenschmidt dove into leaving a lasting impact on the strength world. He would go on to publish at least five books on philosophy and physical culture. In one book, he would illustrate multiple exercises he would do at the time and recommended, which include the hack squat and floor press (Hackenschmidt’s wrestler bridge version).

In 1968, Hackenschmidt passed away at 90 years old at St. Francis Hospital in Dulwich, England. It’s difficult to summarize Hackenschmidt’s full lifetime and career in one article.

He’s a strength legend that has left influence on more than one exercise we still use today. In fact, his book, The Way to Live, is still in publication today.