Eugen Sandow Was a Groundbreaking Strength Pioneer and Father of Bodybuilding

Eugen Sandow is known as “The Father of Bodybuilding,” and he acquired that title for good reason. Not only was Sandow strong, but he developed revolutionary strength training processes for his time that we still employ today.

For example, he’s one of the first to suggest the avoidance of training to failure to promote muscle development. He also pushed the envelop of strength during his time by performing seriously impressive lifts, like one-armed snatching 180 lbs (or more, depending on who you ask) and bent pressing 270 lbs. In the bodybuilding community, Sandow has left such a lasting impact that the Mr. Olympia trophy is called “The Sandow.” Needless to say, Sandow was a strength pioneer that was well ahead of his time, one we still honor today by utilizing his methods and learnings. 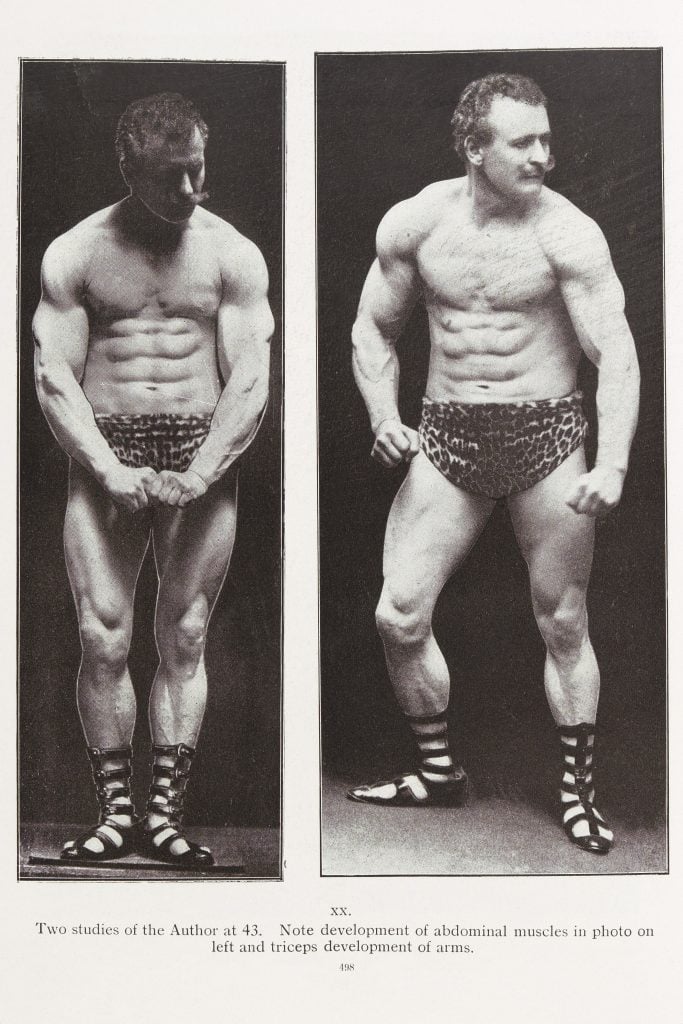 Born in Konigsberg, Prussia in 1867, (now Kalindidad, Russia), Sandow was born Fredrich Muller. One summer, Muller’s father took him to Italy to provide his son with a change of scenery, a common practice at the time to develop a youth’s perspective. Below is a quote from one of Sandow’s books: The Gospel of Strength.

“The desire result of the trip was achieved, but hardly in the expected manner. It was not by strolling under the blue Italian skies in the ozone-laden breezes from off the Mediterranean Sea, but by spending every available moment in the art galleries and museums of the great cities, that I learned of secret of health and strength. The works of the old masters in sculpture and painting roused a thrill of half-envious admiration in me, and the more I studied them the more they fascinated me. Eventually I came home from Italy with the fixed determination that, if training could do it, I would become a strong man.”

On this trip Sandow would discover his love for health and strength firsthand, not by practicing, but by witnessing. He spent most of his time in Italy in the museums, idolizing the sculpted bodies of the Greek Gods. To give you context, Sandow would measure the statues to receive the dimensions for the body circumferences he would later strive to achieve with his love for strength training.

In 1885, Sandow left Prussia to avoid military service. This is where he began his time as a circus athlete and furthered his love for strength and health. It was around this time he adopted his stage name for performances. By 1886, the 19 year old Sandow was regularly performing strength stunts, although he noticed his crowds were equally or even more amazed by his bulging muscles than his lift. This inspired Sandow to develop posing routines, which influence many of the bodybuilding poses as we know them today; in Sandow’s time, they were more commonly referred to as “Muscle Display Performances.” One of Sandow’s famous acts was lifting a dumbbell with openings at each end, so men and women could sit and be lifted overhead. 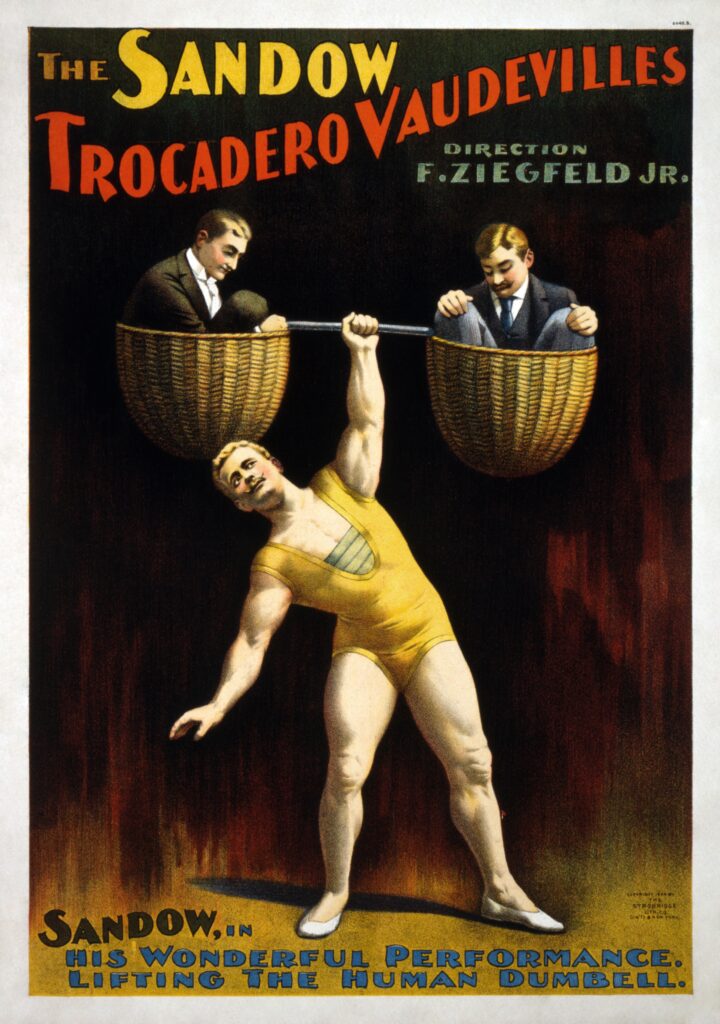 While visiting a gym in Brussels, Sandow met strongman Ludwig Durlacher and began training with him. Durlacher recognized Sandow’s potential and encouraged him to compete in a London strength competition in 1889. Sandow agreed and ended up winning the competition with relative ease, which launched his athletic career and helped further his rise to fame as a strength athlete. As soon as his athletic career took off, Sanday began touring all over Europe, performing shows until 1893 when he traveled to America for the first time. Sandow’s acts consisted of things like one-finger pull-ups and doing back flips with 35 lb weights in each hand. One of Sandow’s most popular and beloved feats was breaking a chain around his chest.

In America, Sandow gained attention after his performance at the 1893 World’s Columbian Exposition in Chicago. That was the same exhibition where Milo Steinborn lifted an elephant on his back. At this time, Sandow was under contract to a Chicago native named Florenz Ziegfeld Jr., who helped Sandow gain even more exposure by performing muscle displays and feats of strength.

A year later in 1894, at the age of 27, Sandow was featured in a short film series by Edison Studios. In the film series, Sandow b is when Sandow really began to notice the audience’s enjoyment of the choreography he used to move and flow through his various flexes. Later that year in 1894, Sandow appeared in one of the first commercial motion picture exhibitions in history, named Sandow, which highlighted his flexing routine. This then led to a performance in the Golden Gate State Park at the Californian Mid-Winter International Exposition.

Midway through his tour in America, Sandow made a trip back to Europe to marry his wife Blanche Brookes. After the wedding, he returned to America to continue touring, although stress and illness would soonafter bring Sandow home to Europe until he was fully recuperated. Throughout his marriage with Blanche, Sandow had two daughters named Helen and Lorraine.

Sandow is also well-known for his business savvy and (at the time) revolutionary way of looking at health and fitness. In 1897, at the age of 31, Sandow began his career coaching fitness and health to others. From the period of 1897-1904, Sandow published five books, began a monthly periodical titled, “Sandow’s Magazine of Physical Culture,” operated a mail-order physical instruction service, and opened his first Institute of Physical Culture, or public gym. If that wasn’t impressive enough, Sandow also created workout equipment when he found existing devices inadequate. He created rubber strands for stretching, spring-loaded dumbbells, and a resistance band machine.

Midway through Sandow’s business growth in 1901, he held the first ever sanctioned bodybuilding competition. It was named, “The Great Competition,” and was held in London’s Royal Albert Hall. Competitors, much like normal bodybuilding today, would come on stage and perform various flexes to be judged. The judges were a sculptor named Sir Charles Lawes, an author name Sir Arthur Conan Doyle (creator of Sherlock Holmes), and Sandow himself. 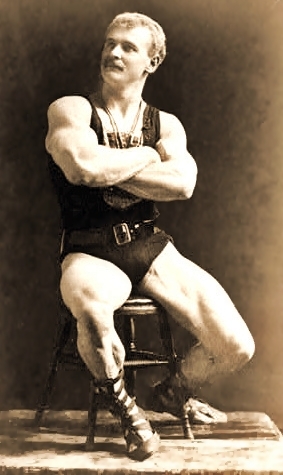 In 1909, Sandow began working with The United Kingdom’s army recruits to prepare them for the physical fitness the army required. In 1911, King George V asked Sandow to become his special instructor for fitness and health techniques. Sandow had become a modern celebrity and a big deal.

On October 14th, 1925 Sandow passed away in Kensington, London. While there are still speculations around Sandow’s death, newspapers at the time reported it was due to a brain aneurysm.  Others speculated a stroke and other rumours spoke of an ongoing syphilis battle. It’s reported that Sandow had struggled with being faithful to his wife. Upon his death, Sandow’s wife requested he be buried with an unmarked grave in London.

In 2002, Thomas Manly, a Sandow admirer, hung a black plaque with gold lettering on Sandow’s grave titled, “Eugen Sandow, 1867-1925, The Father of Bodybuilding.” Every day the strength community is grateful for the revolutionary work Sandow left behind, he not only — and maybe accidentally — founded modern bodybuilding, but he created a sense of wellness that has inspired others ever since.