When you hear the word grit, who do you think about? Probably some Wild West cowboy, which might actually make sense in this scenario. We could make a pretty good case that the early days of strenght sports were a lot like the Wild West. And a driving force in that landscape was Henry “Milo” Steinborn, an early strongman and weightlifter who was well ahead of his time when it came to strength training. In the late 19th and early 20th century, there were no federations, associations, or even standard guidelines for strength competition; just extraordinary, strong athletes who pushed the envelope with lifts and movements – and Steinborn was among the best.

Steinborn recorded some very impressive lifts for his day, including a 553 lb squat (done without a squat rack; more on that below), 218 lb one-armed snatch, 255 lb one-armed jerk, and 375 lb clean & jerk. To top it off, Steinborn recorded a majority of these numbers while weighing in at a relatively light 205-210 lbs.

As mentioned above, Steinborn’s heaviest recorded squat was done without a squat rack. While he may not have been the originator of this squat style, this lift is what built Steinborn’s name and helped coined the exercise today: The Steinborn Squat. This type of squat is performed by standing a barbell perpindicular to the ground and then positioning the body to receive the bar at the bottom of the squat, in a back squat position. Once the bar tips on to the body, and the squatter is in the hole, the squatter then stands up with the weight and performs another full rep. 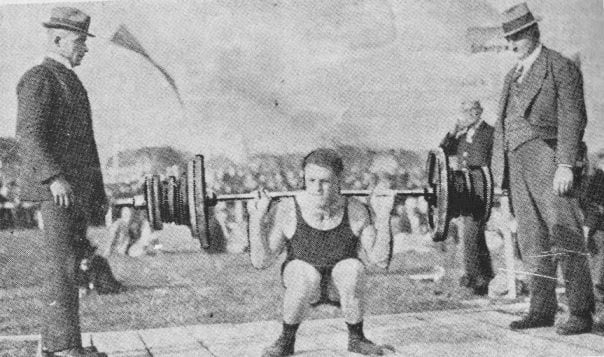 A young Milo Steinborn performs a back squat

Born in Sieberg, Germany, in 1893, there’s not a lot of information on Steinborn’s early upbringing, but there is speculation as to where he learned to lift. It’s thought Milo learned to lift and begin in his strength journey while spending four and half years as a prisoner of war during World War I. Once Milo began civilian life again, he spent years in Germany performing random acts of strength for a minimal income. After finishing second in the 1920 German National Weightlifting Championships to Karl Moerke, Milo moved to the U.S.

After arriving in the United States, Steinborn rapidly built a name for himself and was well known throughout the strength community by 1921. During the first two years after his arrival, Steinborn broke three world records at Philadelphia’s Herman’s Gym in front of a man named Alan Calvert. Calvert was the founder of the Milo Barbell Company, the premium weightlifting equipment producer at the time. Soon after, Steinborn met Arthur Saxon or “The Iron Master”, who helped convince him to begin wrestling for income. This wrestling tenure would involve over 300 matches that stretched from 1922 to 1953. So, not only did Milo perform insane feats of strength; he wrestled in a seriously violent, physically demanding style for over 30 years. 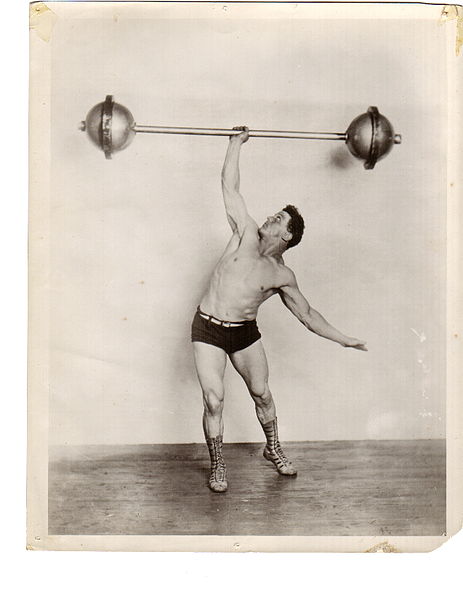 To give a little context on Milo’s tenacious nature, in the 1940’s while under contract with Pepsi, Steinborn would wrestle up to twice a day and perform a 400 lb squat at each wresting event. Mind you, at this point Steinborn was well into his 40’s.

One of the most impressive acts Milo frequently performed – and became well-known for – was the leg bridge. To perform the lift, Steinborn would lie on his back and extend his legs, acting as pillars, and support a bridge that a car would then drive over filled with people. This can weigh up to 5,000 lbs, or two Toyota Priuses. 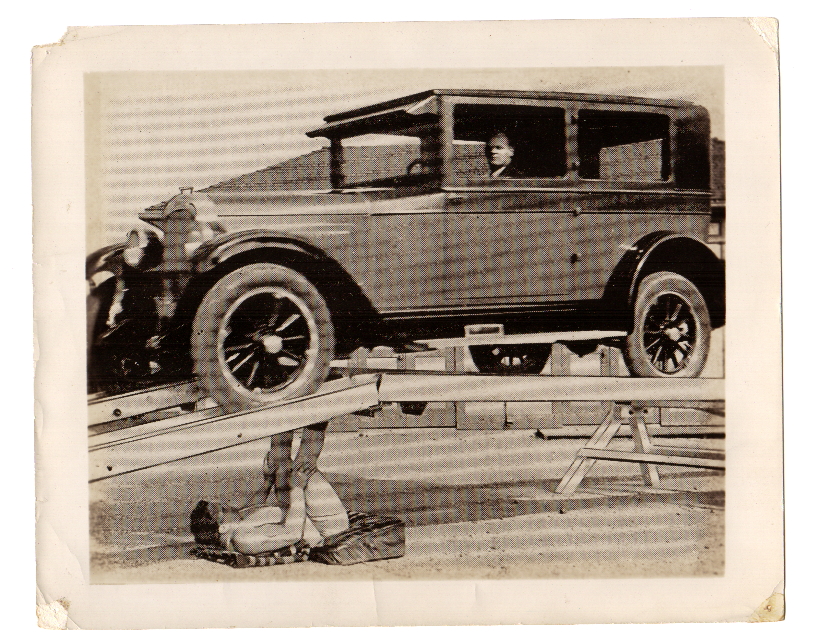 In 1926, one of the leg bridge acts went wrong and Milo ended up suffering multiple leg injuries, only to recover and come back a few months later to continue his wrestling career.

At 57 years old, Milo performed an impromptu back lift of an 800 lb elephant at the 1950 Chicago World’s Fair…while wearing a suit. After finishing a long, successful wrestling career in 1953, Milo opened his own gym in Orlando in 1960 and started promoting for wrestling matches until his retirement in 1978. 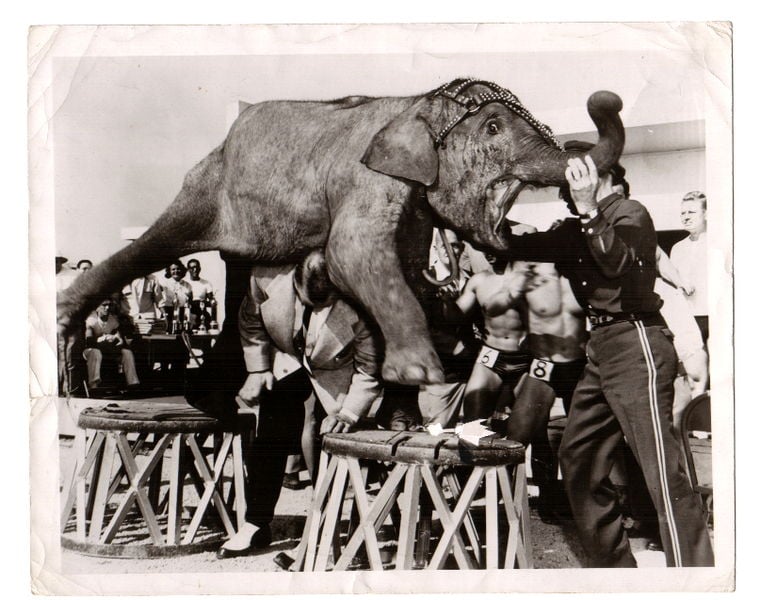 Steinborn back lifting an elephant

All the way into his 80s, it was reported that Steinborn could still perform a 300 lb squat; that’s more than most people can do in their lifetimes. At the age of 93, Steinborn was in attendance at the 1987 Oldtimers Reunion in New York City where he requested someone jump onto his rock hard abs from a height of three tables high. Unfortunately, the request was denied.

Two years later, in 1989, Steinborn passed away at the age of 95. His name will live on through the Steinborn Squat – a move he helped make famous – and the lasting impacts he left on the strength sports community.