Everything you need to know about the diet of the most influential CrossFit® athlete of all time.

On an average workout day, Rich Froning eats somewhere in the area of 200 grams of protein, 500 grams of carbs, and 100 grams of fat — between 3,500 and 4,000 calories per day. But what makes up those macronutrients and how he chooses them might surprise you.

Froning has won the Reebok CrossFit® Games as an individual four times, which was the most of any person ever until Mat Fraser won his fourth title in 2019. But since Froning’s last win as an individual in 2014 he has competed with his team, CrossFit Mayhem, and won the Team division at four separate Games as well. There’s a strong argument to be made that he’s the most influential and successful CrossFit athlete of all time.

For this article we’ve spoken to Nick Shaw, the CEO of Renaissance Periodization and Rich Froning’s personal nutrition coach, to learn the ins and outs of how this man eats to fuel some of the most demanding workouts a human being is capable of. We’ll be covering:

Is intermittent fasting good for CrossFit?

Froning has said in the past that he likes to eat in an 8-hour window, a popular form of intermittent fasting called 16/8. (Because you fast for sixteen hours and eat during eight of them.) He typically trains from 8am until noon, takes a break until 2pm, then trains until 4 or 5pm. (He seldom takes rest days.)

He used to not really eat until his training was done for the day, but Nick Shaw has pushed him to move his window back so that he starts eating during that 2-hour lunchtime break. And frankly, he doesn’t recommend fasting for CrossFit. But it’s not a dealbreaker.

“It’s OK, but it’s not ideal, it’s not optimal. It’s not the best thing you can do,” says Shaw. “I showed (Froning) research that said for high-level athletes it’s probably not the best, but as a coach there’s a fine line. You want things to be optimal, but you want to give people some wiggle room, some space for their personal preferences. If someone’s going to try and follow a diet, do you want to hammer this idea that everything has to be perfect, and then they won’t stick to it? There’s a balance between what’s super, super optimal and what might stick.”

The foundation of Renaissance Periodization’s approach to nutrition is this pyramid, or “priority chart”: 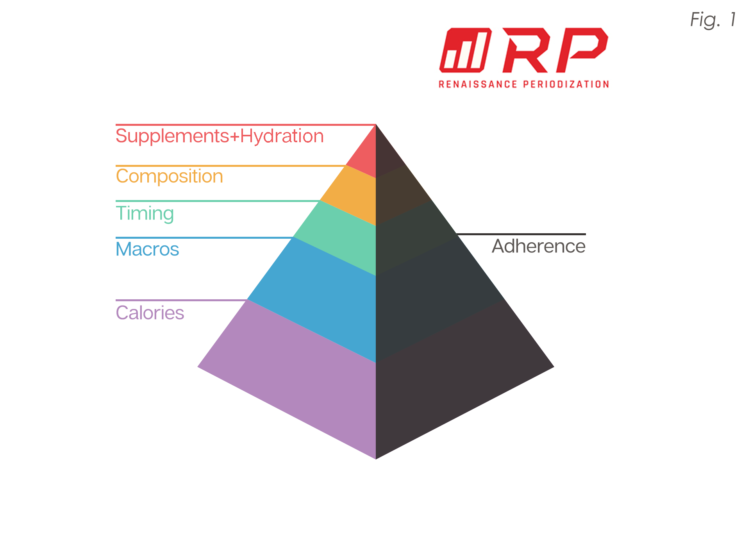 “A few percentage points, in the grand scheme of things, is not too detrimental to performance,” says Shaw.

It’s not ideal to have huge gaps between meals if you’re training twice a day, especially if you’re trying to put on muscle. But if it makes your diet easier to stick to then it’s not a huge deal.

“Pretty much every meal other than the shakes are 45 grams of protein, 25 grams of healthy fats, and then 100 to 120 grams of carbohydrates.”

That’s what the man himself says in this video of a day of eating for Rich Froning. How much protein does he eat throughout a day? The pretty standard 1 gram per pound of bodyweight. He weighs about 200 pounds and Shaw gives him leeway to eat 180 to 220 grams.

“We don’t necessarily pay too too much attention to the ratios and percentages but for most people, one gram per pound for protein. You’ll have some wiggle room, so around there is good,” says Shaw. “I’m not saying you don’t need to be precise, but given how food labels are always up in the air with regard to how correct they are, you assume there’s a margin of error in there. So again, consistency is going to trump perfection.”

[Related: How Much Protein Should I Eat?] 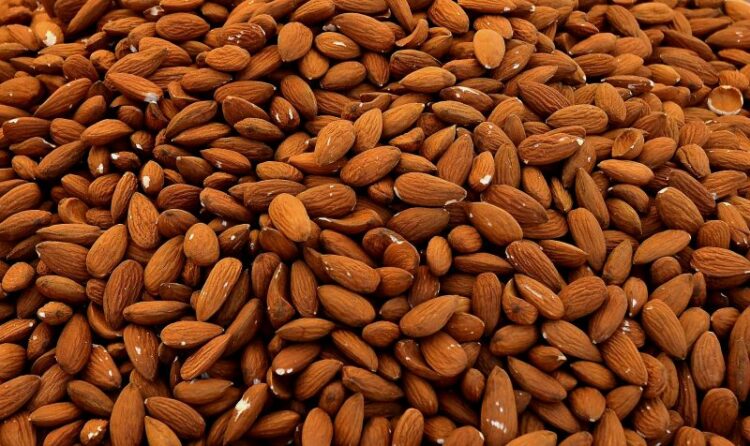 When coming up with the ideal macro split, people generally work out calories first, protein second, and then adjust carbs and fat based on activity levels and individual preference. When it comes to fat, in a diet like Froning’s it winds up a relatively small portion of the overall calories simply because he has to fit in a lot of carbs to fuel his extraordinary activity level.

“Generally, because he’s training so much, the strategy is to limit fats around the workout window because they slow down digestion,” says Shaw. “So for someone training 4 to 5 hours a day over two workouts, it’s all high carb. If Rich ever took a rest day, you’d see that fat intake come up.”

Though CrossFit has historically been the home of a lot of folks pushing higher fat Paleo diets, Froning’s intake is usually around 80 to 100 grams of fat per day. But regular gymgoers who aren’t pro athletes training for hours and hours every day will have more room for fats in their diets.

“I think the trend, especially in CrossFit, has been a bit away from Paleo and more into the macro concept,” says Shaw. “Because I think what people are starting to realize is that it takes so much time and energy to devote to training, and it makes things harder if you’re going Paleo and limiting your food choices if you can’t eat bread and rice. It makes things harder.”

[Want to work out your diet? Check out the best macros calculator for athletes]

Carbs are centered around training and Froning usually eats about 500 grams per day. It dips a little on rest days, but those are very few and far between.

What might be the most unusual aspect of his diet is that carbohydrates are separated into three categories:

Basically, the “healthy carbs” are for any time of day except around your workout. You have the “high glycemic index” carbs post workout and the “workout carbs” are liquid, which you’re advised to take right before and during the workout.

[Related: Your Ultimate Guide to Pre and Post Workout Nutrition]

“While you’re training, it’s going to be a bit more beneficial and optimal to have liquids because they get into the system quickly and they don’t’ cause as much stomach distress,” says Shaw. “Your’e trying to go all out during a metabolic conditioning workout so you don’t want to have too much in your stomach or you’ll be in the guy yakking.”

Although Froning’s most recent diet video had him eating fast food from Chick-Fil-A, Shaw isn’t too worried about an athlete being flexible with food quality.

“From his standpoint he’s hitting those top two in our priority chart, calorie and macros,” he says. “I’m not going to sit here and say Chick-Fil-A is ideal for everybody, but is he doing that every day? No. It’s all a balancing act.”

There are just five supplements that Shaw endorses:

Multivitamins and fish oil are also deemed useful unless you have an absolutely fantastic diet. But of course, most people don’t.

[Related: Our picks for the Best Whey Protein Powders]

Renaissance Periodization’s approach isn’t quite an “If It Fits Your Macros” diet. Athletes aren’t given their calories and macros and free reign to fill them with whatever they please.

But it is a flexible diet: you’re encouraged to prioritize calories, then macros, micronutrients, hydration, supplements, and meal timing in roughly that order. If you want the best results, then hit all those areas of your diet. But what’s actually most important is adherence. If you’re given absolutely no room to eat a meal that might not be perfectly healthy, then you’re unlikely to stick to the diet.

It’s important to remember that you’re probably not Rich Froning, so emulating his diet to a T may not be what’s needed for your needs.

“A couple main takeaways for the average CrossFit athlete is eating a little bit more, especially higher carbs around training, with performance and recovery as your main focus,” says Shaw. “If you’re a typical CrossFit athlete going for an hour WOD a couple of times a week, the need to supplement and eat a lot more around training drops a little bit. So it depends on what level you are.”

A lot of people who try to be healthy tend to undereat carbs and calories, so it’s definitely worth working out your calorie needs and tracking, at least for a few weeks to get a feel for your needs and to give you a base to eat intuitively then on out.

Whatever your level, that priority chart: calories, macros, micros, hydration, supplements and meal timing, is worth remembering.