The Untold History of the Bench Press

The bench press has been called the King of the Upper Body Lifts, and given its unstoppable popularity amongst gym goers, chances are it’ll retain this title for the foreseeable future. Upon entering the gym, keen observers will note the almost mythical attraction this lift has for trainees of all experience levels. Those entering the gym for both the first and the five hundredth time test their strength against The Bench.

What might surprise modern lifters is the fact that prior to the 1940s, the bench press, the ‘King of the Upper Body Lifts’, was a rather specialized and underused lift. It wasn’t until a series of societal and technological changes were wrought that the modern bench press became a training staple. Beginning with the early history of the bench press, today’s post traces the lift’s history, from the early days of physical culture to the modern age.

The Pullover and Press

As is the case with so many lifts, the bench press did not emerge as a fully coherent lift for many decades. There were predecessors and pretenders to the throne along the way. What the health lift was for the deadlift, the pullover and press was for the bench press — they planted the seed for what would become one of the foundational big three.

While undoubtedly we could begin the history in Ancient Greece when soldiers would use push-ups for chest development, it seems best placed to begin instead in the late nineteenth and early twentieth century.

This was the time of physical culture. Led by names like Eugen Sandow, Arthur Saxon and George Hackenschmidt amongst others, physical culture represented a worldwide health phenomenon interested in matters of bodily development. Seen, for good reason, as the precursor for modern gym culture, physical culture witnessed the emergence of gymnasiums, barbells and dumbbells in much greater numbers. With greater interest came more variety in lifts and displays of strength. As trite as it sounds, we have to remember that trainers in those days experimented much more with their lifts. Few could call upon the vast resources we have today to discover how to develop their legs, arms, chest etc. 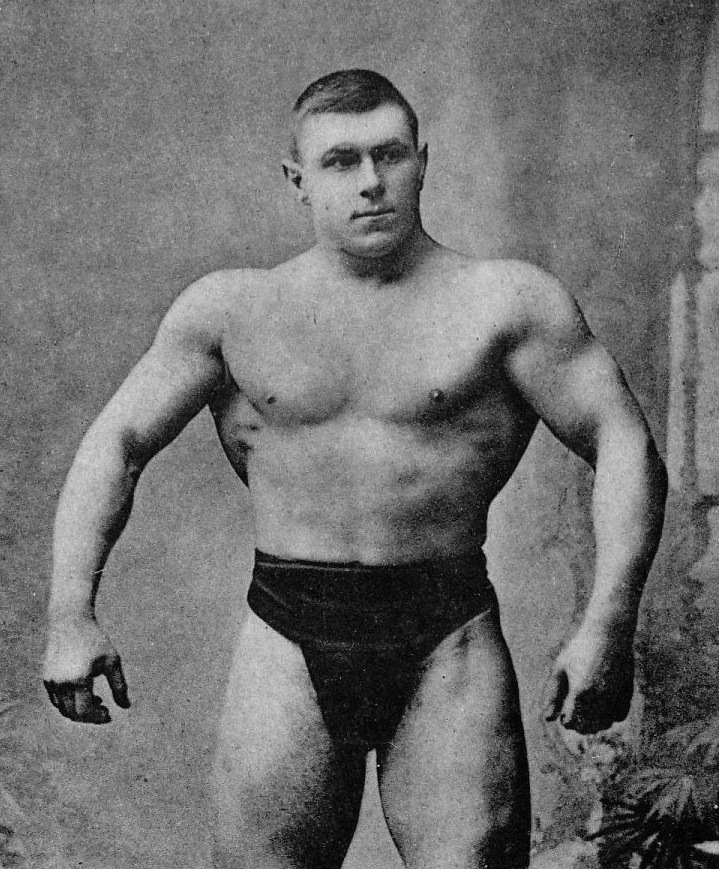 In this vein came the pullover and press. Lying on the ground, lifters would pull a barbell over their head at arm’s length and then press it either from their chest or from their stomach, a point we’ll get into later. Similar to the floor press, albeit slightly more specialized, the weights used in this lift are nothing short of remarkable. Writing in The Development of Physical Power in 1905, the Germanic powerhouse Arthur Saxon, pictured below, regularly lifted over 300 pounds. Saxon wasn’t the only one fond of the Pullover and Press. Indeed, his stiffest opposition came from another goliath of the early days of physical culture, the Estonian wrestler and weightlifter George Hackenschmidt. In 1899, Hack’s pullover and press totalled 360 pounds.

Even at this early stage however, discrepancies in form and technique had already begun to creep in. In 1900, George Lurich pressed 443 pounds from the floor. Unlike Saxon and Hackenschmidt however, Lurich used a ‘belly toss’ technique. Pulling the bar overhead, Lurich brought the bar to his abdomen and using a healthy amount of hip thrust effectively pushed the bar up. A modern iteration of the belly toss is perhaps the tendency exhibited by some lifters when they bring their ass off the bench and squirm upwards until the bar has been pressed.

Arthur Saxon Performing the Pullover and Press. From Arthur Saxon, The Development of Physical Power (London, 1905)

Lurich, one stresses to add, was not the only man utilising the belly toss. Despite writing on the stricter form, Saxon was known to use the belly toss when dealing with heavier poundages. In any case, the pullover and press was for many the de facto chest lift of this time. Certainly, it was still in use in the 1920s and 1930s when strength competitions were coming to the fore in a much greater way.

While the first decade of the twentieth-century saw early weightlifting competitions, such as the Olympic Games, it was during the 1920s that things began to move in a more standardised way. What is meant by this is that more attention was given to stricter ideas of form and execution in the lifts. Within the United States, this attention was given life in the critiques of Bob Hoffman.

Hoffman, as detailed by John Fair in a series of excellent articles and books, was one of the leading voices in American weightlifting during this period. The owner of York Barbell and an advisor/coach to the US weightlifting team at various points, Hoffman’s influence and opinions shaped several early modes of powerlifting, bodybuilding and of course, Olympic weightlifting.

Respond and Receive: In this pic bench pressing bad ass @jenthompson132 is holding 500 pounds! Answer this question and Receive THE NEW (not yet released) MB1 Super Star Elbow Sleeves! How many Super Training Gym Members have Raw Bench Pressed 500 or more in a meet? 3 people will be chosen as winners! BONUS!!! If you can actually name all the ST 500 plus pound raw benchers you will WIN A TRIP to Super Training Gym to train with the team!!! Like it, tag a friend that needs to see a chick handling 500! #respondandreceive #st06 #strongelbowsleeves #liftlikeagirl

In response to the American Bill Lilly’s record breaking feats with the pullover and press, Hoffman began to single out the belly toss as a means of cheating. (Lilly boasted 484 pounds using the belly toss). In not so veiled terms, Hoffman commented during this time that some competitors were effectively cheating by performing the lift primarily with their abdomen and not their chest. In effect, he claimed they were using momentum to complete the lift and thereby making a mockery of the entire pursuit.

In other words, he wasn’t pleased. Owing in part to Hoffman’s influence within the American Athletic Union (the AAU), the belly toss was officially outlawed in competition in 1939. Though the belly toss was still permissible in European competitions, it began to fade in the US. Without derailing the present article with comments about the global reach of Americanization, the AAU’s decision would help to slowly but surely push the belly toss into obscurity.

As a final point on this decade, we have some evidence of boxes and benches being used in the mid to late 1930s in lieu of the pullover and press. This was the birth of the modern bench press, though few noticed. As noted by Schuler and Cosgrave in The New Rules of Lifting, prior to WW2, this form of lifting was an incredibly rare thing.

The Birth of the Bench Press

With the cessation of WW2 and the renewed impetus given to all matters of iron, the bench press grew in popularity. We mentioned the emergence of benches and boxes in the 1930s. By the late 1940s, those interested in bodybuilding and matters of strength turned towards the lift. According to John Sanchez, one of the most fascinating powerlifting anoraks of recent times, the bench press underwent its greatest revolution during the 1950s, owing in part to the development of rack stations. Not only did this make the lift more accessible to gym goers, it encouraged the use of greater and heavier weights. While the pullover press was arguably a greater test of overall strength, the rack assisted bench press allowed lifters to isolate their chest in a much greater way.

Within the world of bodybuilding, Marvin Eder and George Eiferman were two of the proudest proponents of the bench press during the late 1940s and early 1950s. Hoffman and others publishing on lifting began to take notice. In the late 1950s, Hoffman worryingly noted that many Olympic weightlifters had become obsessed with the bench press. In 1957 the Canadian mogul Joe Weider labelled the bench press as the ‘Greatest Lift of Them All’ in his Muscle Power magazine. Within two decades the lift had come from regular obscurity to lifting celebrity. How?

In the first instance there were innovations in the equipment itself. Whereas lifters in the 1930s needed spotters to hand them the weight, those in the 1950s had the benefit of a rack to take the weight from. Coupled with this, folks in the 1950s could cast away crude boxes and benches for reinforced benches designed specifically for the press. Hoffman, for example, began marketing a 5 in 1 bench during the 1950s which would allow users to press at incline, flat and decline degrees.

So, bodybuilders were on board. Next came those interested in matters of pure strength. In November 1950, Doug Hepburn became the first man to pause press 400 pounds in the bench press. By 1953 the Canadian was pushing 500. Stemming from this, and a greater interest in matters of strength, efforts were made in the 1950s to have powerlifting sanctioned by the AAU. Led primarily by Peary Rader of Ironman Magazine, this quest came to fruition in the 1960s with the first of several powerlifting competitions. The birth of these contests placed a much greater focus on the bench press, thereby ensuring the lift’s popularity increased.

Yo maniacs, who's ready for Q&A number 2? If you missed the first one, check it out in the bio-link brother. Tag a fellow maniac and share the mania. #hulkhogan #qanda #youtube #hulkamania #hulkamaniac #wwe #wwf #wrestling

The advent of an official powerlifting federation in 1972 (the International Powerlifting Federation) saw two major developments to the bench press. In the first instance a race began for the 1,000-pound press, a feat controversially completed by Gene Rychlak Jr in 2004.

A final point to consider in the history of the bench press has been the emergence of the lift within popular culture in a much greater way. During the 1980s, fans of both the NFL and WWE were familiarized with the bench press. With the advent of the NFL Combine in the 1980s, football fans were treated to the now familiar bench press test of strength which sees aspiring athletes press 225 pounds for as many reps as possible.

In 1988 WWE fans watching that year’s Royal Rumble saw Dino Bravo attempt to press a supposed 655 pounds with the aid of Jesse Ventura. These (admittedly suspect) feats were complemented by the dozens of Hulk Hogan training montages from the 1980s and early 1990s.

Wrestling and football fans were eventually joined by the general public, who from the late 90s and early 00s, were continually told the workout routines of the latest actor’s remarkable physique transformation. The bench press had firmly entered the mainstream.

When surveying the history of the bench press over the past century, it is difficult not to be struck by its rise to fame. ‘What do you press?’ has become a ubiquitous question of strength and admiration amongst gym goers. Some still refer to Mondays as International Chest Day and hundreds if not thousands of lifters will overload the bar seeking to impress those around them.

Emerging as a fringe exercise at in the late nineteenth century the press, at least in terms of popularity, holds a strong title to the King of upper body lifts. There is little to suggest that its reign won’t continue.