Nutricost Creatine Monohydrate Review — It’s Cheap, But What Else?

Nutricost is a Utah-based supplement company, and as the name suggests, they specialize in cheaper supplements — their slogan is “Quality Supplements and Vitamins for Less.” They offer a really wide variety of products including everything from your standard vitamins and minerals to more niche products like ketogenic diet support and spinach powder.

Let’s take a closer look at their Creatine Monohydrate.

Nutricost’s Creatine is unflavored and it only has one ingredient, so there’s not a whole lot to say as far as the contents go. That ingredient, of course, is creatine, specifically creatine monohydrate. That’s easily the most widely used and widely studied form of the supplement.

Creatine is a nitrogenous organic acid that’s present in most animal tissues and is particularly high in beef. Still, you need to consume a kilogram of beef to get 5 grams of creatine, so supplementing can be a good idea. One or two daily teaspoons of creatine is linked to improved power output, larger muscles, and a healthier brain.

How does Nutricost’s creatine measure up? For starters it only contains creatine, so there are no artificial ingredients or sweeteners. That also means there are no extras like high-glycemic carbs, which may help drive creatine to the muscles more quickly, or branched chain amino acids, which can be useful pre-workout. If you prefer your creatine with a little something extra, this isn’t for you.

It’s also micronized, which means it disperses more easily in water than your standard creatine monohydrate. (It also means it’s fluffier in texture.) This can be pretty useful for folks who take their time sipping their supplements and don’t like piles of powder settling at the bottom of the shaker.

One thing that may put off some users is that there aren’t really many certifications on this product. For instance, some creatine supplements are certified Good Manufacturing Practices, though Nutricost’s isn’t. A lot of creatines get third party tested for banned substances, this doesn’t. It’s non-GMO and gluten-free but beyond that there’s not a ton of testing done on it. For some athletes, this may not reach the level of quality control that they’re used to.

Shopping around? See our choices for top creatine brands.

This is $12.30 for 100 servings. That’s 12.3 cents per serving or 2.46 cents per gram, which is very cheap. Until now, the cheapest creatine I’d ever seen was MuscleTech’s Platinum Creatine at 2.8 cents per gram, but Nutricost has them beat.

It’s a super, super basic creatine and what you see is what you get. There are no fillers but there are no extras. It’s also extremely cheap. It mixes well but it’s unflavored. If you’re looking for the most basic creatine product on the market, this may just fit the bill. 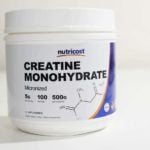