Strong glutes and fine-tuned hip hinge mechanics are a must for strength athletes. Here are two exercises worth learning.

The hip hinge is an essential movement pattern. You hinge at the hips anytime you need to bend over to pick something off of the ground. You hinge at the hips to deadlift. Your hips hinge when your sprint, dance, or throw a kick. The point is, there are many valid reasons to care about how strong and mobile your hip hinge is. Two popular movements for bolstering and fortifying your hip hinge are the cable pull-through and hip thrust.

Both of these movements are as pure of hip hinge-focused movements as one can find. While they’re similar in function — the form, equipment, and execution vary. If you’re after more efficient hinging (and you probably should be), here’s what you need to know about choosing to program either a hip thrust or pull-through.

Differences Between the Cable Pull-Through and Hip Thrust

They’re both hip hinges, but each movement presents different pros and cons to consider before adding one or the other to your program.

The Ease of Use

Both movements are fairly simple to set up and execute, but cables are slightly easier to set up (assuming you have a cable pulley). You set the cable pulley low, attach the rope, select the weight you want to lift, and then hinge. 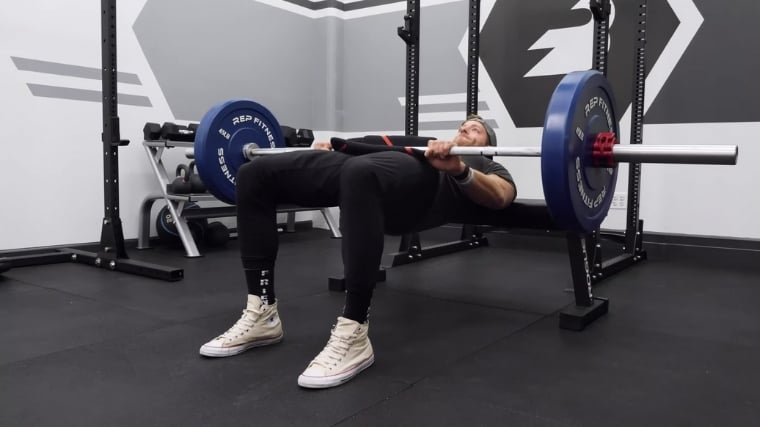 For the barbell hip thrust, you need to load each side of a barbell with weight plates, have a training bench on hand, slide under the barbell, and balance it on your lap as you thrust up. Also: as loads progress, the barbell can dig into the pelvis during the hip thrust, which hurts, especially as you add more weight to the bar over time.

Generally speaking, you’ll be able to move more weight with the hip thrust since, A) you have more points of contact to the floor (and therefore support), and B) a barbell has more loading potential. The cable provides more tension as the weight stack is suspended throughout the exercise’s range of motion. You won’t lift as much, but your muscle fibers will be under siege for the duration of the set.

Similarities Between the Cable Pull-Through and Hip Thrust

Both movements are similar from a mechanics standpoint, and it’s beneficial to become aware of these similarities to help you understand where they differ.

The Muscles They Target

Both exercises target your lower back, glutes, and hamstrings primarily. The hip thrust is more glute-focused since those muscles are the main drivers of your hips. Your hamstrings and lower back are involved, but more to help stabilize the weight at the apex of the exercise. 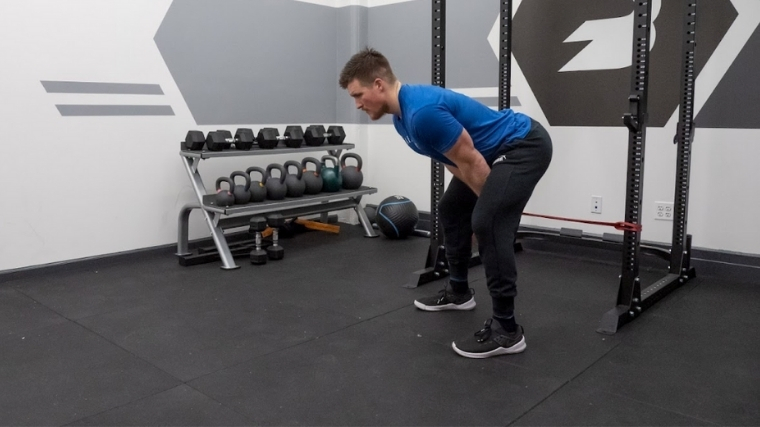 Both the hip thrust and cable pull-through are hip hinge movements, but they’re not apples to apples. The hip thrust as you lay down and thrust your hips up, which is a more specific movement compared to the more classic hinge on display during the pull-through.

Generally speaking, strength athletes can’t load each movement with enough weight to consider either a replacement to the deadlift or squat. That said, both exercises are effective at increasing the size of your glutes in a medium to high rep range (10 to 15 reps) using medium to light weight. You’ll be able to do more sets with these exercises to add more volume to your glutes since they won’t be as taxing as more demanding exercises like squats and deadlifts.

How to Do the Cable Pull-Through

Set the pulley of a cable machine to the lowest setting and hook the rope attachment to it. Grab the rope with a neutral grip — palms facing each other — and walk a foot or so away from the cable tower. Bend your knees slightly and point your toes outward just a bit. Drive your butt back and hinge at the hips until your chest is nearly parallel with the floor. Let the rope attachment glide through your legs, but don’t let it move out of the starting position. Extend your hips fully while bringing the rope through your legs, and pause at the top for a second, and squeeze your glutes.

Benefits of the Cable Pull-Through

Although the cable pull-through is typically performed on a cable tower, you can try alternatives that follow the same movement pattern.

If you don’t have access to cable pulleys, you can swap them for resistance bands instead. The setup for these will be the same as the pulley — at a low height and facing away from its anchor — however, the bands will increase the tension as you get closer to lockout. This makes it ideal for helping you break past sticking points in exercises that require a hip extension, such as the barbell squat.

Note: We find it’s best to wrap the bands around a sturdy power rack.

How to Do the Hip Thrust

Grab a barbell or dumbbell and sit down on the ground with your back resting against a bench and the barbell or dumbbell resting on your hips.  Spread your feet shoulder-width apart and then lift your hips while simultaneously pressing off your feet to lay your upper back on the top of a flat bench. Your body should be parallel to the ground, and your knees should form a 90-degree angle. Lower your hips slightly, then drive them up to lift the weight. Pause at the top and squeeze your glutes, then lower your hips back to the starting position.

Benefits of the Hip Thrust

The hip thrust has much more room for variations compared to the cable pull-through. Below, we’ll give you a glimpse of the different forms you can play with.

Like the cable pull-through, you can decide to perform the hip thrust with resistance bands — the looped ones. The bands work the same for hip thrusts as it does for cable pull-throughs. As you extend your hips, the bands will increase in tension, forcing your glutes to work more at the last degree of the rep.

The benefits of using a dumbbell for hip thrusts are comfort and volume. It’s much easier to set up this exercise with a light dumbbell than a heavy barbell. The lighter load will allow you to do more sets and reps to target your glutes with more volume, which will make your glutes bigger.

Using a barbell is the most difficult of the variations. However, it allows you to load with the most weight, meaning it will get your glutes the strongest.

The Cable Pull-Through Vs. Hip Thrust — When to Use Each

It’s great, and all that you know the differences between the cable pull-through and hip thrust, regarding the movement pattern and setup and positioning, but it won’t do you any good if you don’t know which one is better suited for you.

The cable pull-through is the winner if your goal is to add volume to your glutes and tone them. That’s because you’ll be able to do slightly more reps with lighter weight in a more comfortable position — which will allow you to squeeze your glutes and pause them for longer, increasing their time under tension.

The hip thrust is more beneficial for strengthening your glutes, though, since you’ll be able to load it with more weight if a barbell is used.

Since the hip thrust allows you to extend your hips with more weight, you’ll develop more power with this movement, so if you’re an athlete that requires power (e.g., linebacker, powerlifter), you should focus on barbell hip thrust. In fact, a 2019 study found hip thrusts to be an effective exercise for improving sprint speed. (1) 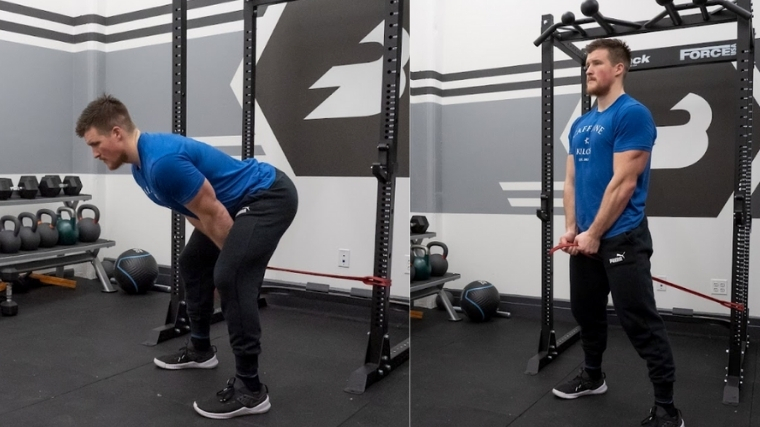 The ability to load the hip thrust to a heavier loading scheme allows stronger athletes to add quality, dense, strong mass to their glutes, hamstrings, and hips without stressing the lower back the same way an exercise like the squat could.

The cable pull-through is better for general hamstring health since the knee flexion is reduced during the range of motion, forcing the lifter to increase their range of motion in the hamstrings and hips.

Both of these movements are fairly simple to grasp. The lifter is cross-sectional on a bench for support in the hip thrust and is asked to raise and lower their hips without over-arching the back. While most may not have issues with this movement, there may be limitations with hip mobility and/or lack of control — therefore, the cable pull-through is preferred if you suffer from mobility issues. However, though it’s simple, it may demand slightly more focus, balance, and hip/hamstring control.