How to Train Power for Speed and Stronger Lifts

Power training can unlock your athletic potential both in and out of the gym.

When it comes to performance, athletes of all disciplines have one thing in common — they’re powerful. Whether it’s cranking out an absurd number of bench press reps in the NFL combine or snatching a 500-pound barbell in the blink of an eye, power output is a critical dimension of athletic performance in sport.

However, even if you don’t plan on making it to the Olympics and are just trying to get stronger in the gym or pack on some size, incorporating power training into your routine can still get you to your goals a little quicker. We’ve broken down everything you need to know about power development and how to seize it:

Before we dive into training for power and how to go about it, we need to revisit high school physics. Many people commonly confuse power and strength (the somewhat misnamed sport of powerlifting being a potential culprit). While the two are closely related, power specifically refers to generating force in a given unit of time.

In athletic contexts, power is distinct from strength, which is purely about the amount of weight you can lift, usually for a single repetition. Power is your rate of force development (RFD) — not just how much you can lift, but how fast you can lift it.

Your muscles generate force by contracting. The ability to contract rapidly has repeatedly been linked to better strength gains (1) but may even prime you for extra muscle growth (2). As such, improving your contractility — the speed at which you can explosively generate force with your muscles — is the focus of power training.

How to Train for Power

Unlike strength training, which is sometimes as simple as adding five pounds to the barbell every time you step into the gym, or bodybuilding, which revolves around creating fatigue, power training requires a degree of finesse to benefit from.

When it comes to the “big three” of training vectors — intensity, volume, and frequency — knowing where to dedicate your attention is crucial. Modern literature indicates that intensity and volume influence gains more strongly than frequency, which holds true for power development.

If you’re trying to move weights quickly, you need to train in a way that reflects your goal. Grinding through heavy sets a centimeter at a time is a necessary evil of getting strong but can be flat-out counterproductive for boosting explosiveness.

That said, if you’re never pushing your effort past the bare minimum, you’re likely leaving gains on the table, both in terms of power development and strength. Extensive research has been published on the right level of intensity for improving an athlete’s RFD. Studies indicate that while working with light weights can improve power output (3), a combination of light speed work and heavier (relative) sets is optimal (3)(4).

You don’t have to be on the track and field team or have a CrossFit membership to get comfortable with — and benefit from — plyometric work. Since low-intensity training is essential for improving RFD, plyo classics like sprints, box jumps, or even burpees make for a great way to train speed in the gym.

Plyometric training has been shown to augment lower body power when integrated into a resistance training program (5), which lends credence to its placement in a well-designed training plan.

[Related: The 8 Best Plyometric Exercises to Power Up Your Training]

If you’re on the fence about whether Olympic lifting is worth learning for power development, you need only watch a professional weightlifter in action. Vaulting a heavy barbell overhead in a flash requires a truly extraordinary amount of force.

There may be no single better tool for training power in the legs, hips, and upper body than the snatch or clean & jerk.

Olympic lifting fosters explosiveness. You have only a moment to summon all your strength and inflict it on the barbell. If you can’t reach a sufficient RFD, you miss the lift. It’s as simple as that.

Olympic lifts have been shown to dramatically increase sprint speed and vertical jump height, sometimes even moreso than training those movements specifically. (6)(7) This creates a synergistic effect between weightlifting and dedicated plyo work in your program, where doing one helps you perform better at the other.

Be advised, however — weightlifting is not something you can pick up in a day. Competitive lifters spend years perfecting their technique for their sport. Fortunately, plenty of variations can be added to your workouts that don’t take months to learn. Hang cleans, push presses, and power snatches are fantastic options for developing power with Olympic lifting.

This may seem unrelated at a glance, but including some bodybuilding work in your training plan can augment your power output even if you don’t intend on entering a physique competition.

Your skeletal muscles contract to act on your bones and generate force. A bigger muscle with a larger cross-sectional area (CSA) will therefore generate higher amounts of force. Muscular CSA has been corroborated as a relevant factor in power output (7), so don’t shy away from your accessory exercises. Just don’t make them the centerpiece of your routine if you want to be fast.

Not every piece of the power puzzle is concrete in nature. Your mental approach to training can sometimes strongly influence your results, which is doubly true when training for power.

When performing dedicated speed work, you should be aiming to move as fast as possible each time — whether you’re working with light, moderate, or no resistance at all. In fact, attempting to move forcefully can be just as beneficial as the actual velocity you reach (8).

Benefits of Training for Power

If you grew up playing sports, your coaches probably went out of their way to get you to move faster. Generating speed quickly has obvious relevance to track or baseball. Still, higher power output is also associated with better performance values in other sports, particularly those involving external resistance like football or rugby (9).

One caveat to this that is worth mentioning — some literature has postulated that athletes whose main sport already involves a high degree of power or agility work may find additional speed training redundant due to a blunted physiological response to added work (9)(10).

Everyone, not just competitive powerlifters, wants to be stronger. And, since we’re all human beings, we’d like to — ironically — take the path of least resistance to get there. 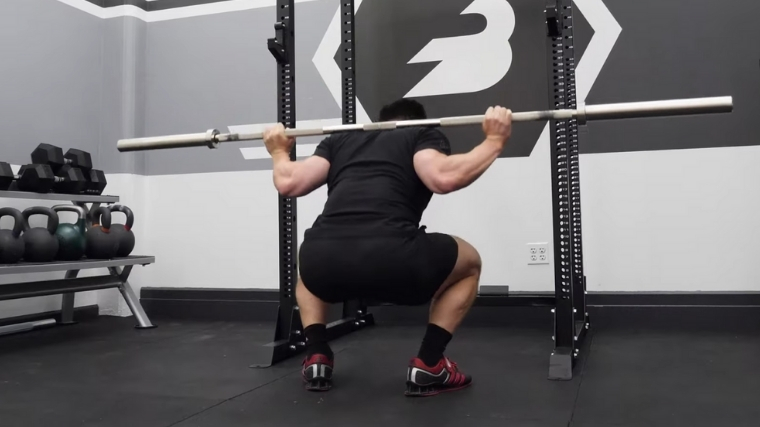 [Related: Nutrition for Athletes — How to Eat for Muscle & Performance]

Even though there’s no shortcut to unlocking strength, research has repeatedly backed the claim that training for speed or power can hasten your progress. Combining force development training with standard lifting will likely result in better strength gains than lifting alone (1)(4)(7).

If you watch any professional squatter at work, they usually maintain a decent level of speed, even when lifting near their absolute maximum. This is because training specifically for speed allows for application across all intensities, improving strength levels overall.

No matter how carefully or tightly you calibrate your training, lift long enough, and you might run afoul of an injury. While aches and pains are an unwelcome aspect of the iron game, the risk factors can be successfully mitigated and managed.

How does power training fit in? Many of the same mechanisms that facilitate gains in force development also improve balance, coordination, impact absorption, and proprietary awareness. Some literature also suggests that power training and plyometrics can prevent injurious outcomes in day-to-day life, particularly in elderly populations. (11)

A Template for Power Training

The breadth of literature backing power training more than confirms it as a valuable inclusion into a training plan, but the real nugget of wisdom is how to go about doing that.

Below you can find two sample sessions that put these principles into practice:

Bulging biceps and chiseled pecs will get you looks at the beach. A five-plate squat turns heads in most commercial gyms. But genuine, well-developed athletic power bleeds into every activity you perform, enhancing your speed, skill, coordination, agility, and more.

Anyone who considers themselves an athlete — recreationally or otherwise — should train to develop their power output. The drawbacks are few, but the benefits are nearly endless.