Add the Box Jump to Your Routine to Power Up

Increase your hops, squat, and awareness with the box jump.

Strength matters but power — defined as how quickly you can move weight — is the show. It doesn’t matter how much weight you can support on your back if you can’t move it with gusto. More power means an enhanced ability to lift more weight more quickly, and, over time, that’ll translate to more weight on the barbell. Building power requires the right exercises, and the box jump is one of the best moves to build (and test) your lower-body power output.

This plyometric exercise has the lifter jump from the ground to a box, with the goal to jump on a taller box eventually. For reference, JJ Watt, the defensive end for the Arizona Cardinals known for his strength and power, has hit a 61-inch box jump. We can’t guarantee you’ll post the same numbers, but the box jump will grant you more power to apply to your other leg exercises. Below we’ll discuss:

How to Do the Box Jump

Here’s the right way to do a box jump. Remember, you want to be nimble and light on your feet. Don’t try and force a jump to a box height you’re not yet ready for. 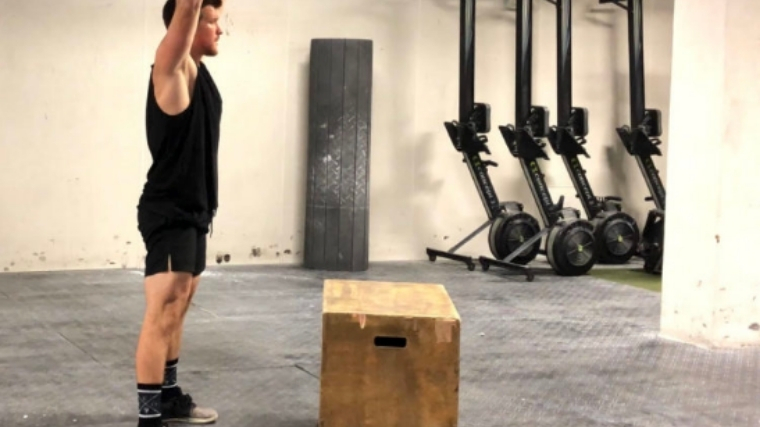 Find a box and stand facing it, about six inches away. Start with the feet about hip-width so that the ankles, knees, and hips are nearly stacked above one another. Swing your arms up.

Form Tip: A good rule of thumb is to set your feet a couple of inches closer together than you’d stand for a back squat.

Step 2 — Load the Hips and Jump 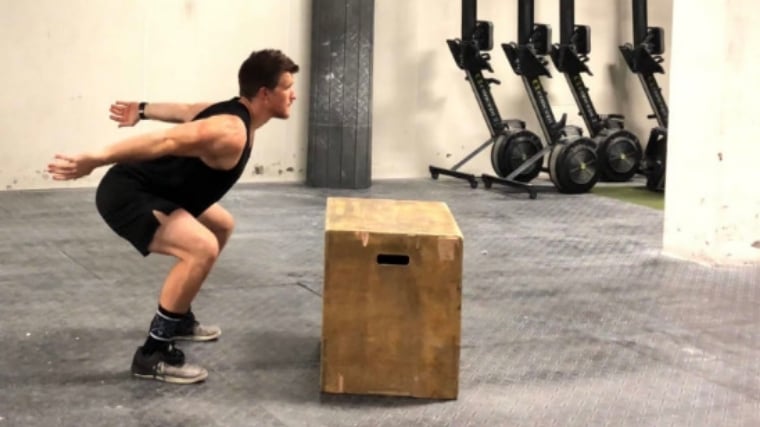 Form Tip: The load to jump should be one smooth motion. Try not to segment this movement. Otherwise, you’ll lose power, and your jump may fall flat. 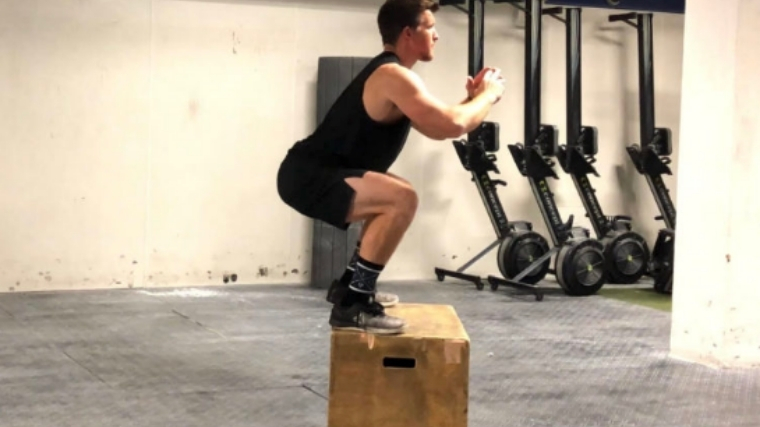 Upon landing on the box, the lifter’s ankles, knees, and hips should be flexed to allow the muscles to absorb the body weight and force. Land in a squat position and then stand up.

Form Tip: You want to appear to float right above the box, landing so that your entire foot is on the surface.

Benefits of the Box Jump

Here are three ways that the box jump will positively impact your performance.

Increased force production can come from various methods, such as building stronger legs with squats, deadlifts, and other forms of resistance training. However, in most sports, such as weightlifting, strongman, CrossFit, and more traditional athletics, the ability to promote force at increasing rates is a key indicator of athletic potential.

Box jumps can be used to increase athletic potential, increase lower body explosiveness, and have direct carry over to other forms of jumping, squatting, deadlifting, sprinting, and weightlifting.

Proprioception is one’s ability to control one’s body in space without even seeing the limb. Think about an Olympic wrestler defending a takedown — their legs are sprawled out, their arms are hooked over their opponents, and their head is placed on the attacker’s mid-back. It’s an involuntary reaction that requires agility, finesse, and physical awareness.

Like other plyometric movements, box jumps can help lifters establish better body awareness and control as they explode from one position to another.

To get from the floor to the box, the hips and knees need to extend forcefully to drive the body’s mass. Ultimately, this builds more power in these specific areas. This added knee and hip power will help other movements that require it — such as lunges, hip thrusts, and sprints.

Muscles Worked by the Box Jump

The below muscle groups are targeted with box jumps. Note that box jumps do not necessarily increase muscle hypertrophy or strength but are used as a plyometric exercise to increase the lower body’s explosiveness and power output.

The hamstrings are one of the primary muscles involved in the box jump as they flex the knee.

Like the hamstrings, the quadriceps are involved in the force output necessary for the box jump, as they promote knee extension that propels the lifter’s body upwards away from the floor.

The glutes are responsible for powerful hip extension and supporting the hamstrings and quadriceps in forceful lower body joint extension.

The calves are responsible for ankle plantarflexion. Strong, stable, and powerful calves can increase stability and help lifters reach a more force triple extension in most explosive movements.

Who Should Do the Box Jump?

Anyone can use the box jump. Here’s why and how this movement affects different populations.

Fitness athletes, such as CrossFitters, often perform box jumps during a competition. Also, box jumps are a great way to jack up the heart rate to enhance conditioning.

For all the same reasons listed above, any gym-goer can benefit from box jumps. That said, please start with a low box to ensure you’re A) nailing the proper mechanics and B) aren’t risking injury.

Below are three primary training goals and programming recommendations when programming the box jump into workouts. Note that these are general guidelines and are not the only way to program the box jump.

Use a lower box and focus on a smooth takeoff and a stable and controlled landing. Perform three to four sets of three to five repetitions, resting two minutes between sets.

To Increase Power and Explosiveness

To elicit more power, you’ll need to push a bit harder by jumping to a higher box. For this reason, you’ll aim to complete just a few reps (maybe even one), producing as much force as possible to hit your target. Start with three to five sets of one to three repetitions, resting two to three minutes between sets.

You can do more repetitions to increase training volume and ramp up conditioning. Do two to three sets of 10-20 repetitions, resting 60-90 seconds between.

Below are three box jump variations that can be used to keep training varied and progressive.

The athlete starts from a seated position and then explodes up to a box jump. This variation increases concentric power output since the person jumping can’t load up ahead of time.

The one-step approach to a box jump (rather than starting from a standing position) can help individuals who may need to increase the jumping ability for sport-specific purposes. This also allows an athlete to gain momentum as they go into the jump, often increasing the height one can reach.

As the name implies, this is a box jump off of one leg. This variation is hard to do and requires a lot of balance and proprioception. However, the payoff is increased unilateral strength, power, and balance.

Below are two box jump alternatives folks can use to increase explosiveness.

The broad jump is a plyometric movement that has the athlete jump in a more horizontal trajectory. So the hip flexion is increased (to drive the body forward), and the knee extension is decreased (since less height is needed). Therefore, the hamstrings and hips are slightly more involved, directly applying running and sprinting.

The squat jump is a plyometric movement that can increase the load used (often light loads) to induce greater muscle activation and power output. This is common in most Olympic weightlifting and formal sports programs during power and explosive phases.

How high of a box jump should I perform?

You should jump to as high of a box as possible while still maintaining solid box jump mechanics. That is an extension of the ankles, knees, and hips, and a soft heels-first landing. If you find yourself overextending or your feet sliding on the box upon landing, then lower the height.

How many sets and reps of box jumps should I do?

For max power output, stick with three to five sets of one to three reps to a high box. For endurance-focused workouts, do two to three sets of 20-plus reps to a lower box. To work on technique, choose a moderate-height box, and then perform three sets of five reps.

Should you step down or jump off a box in between reps?

It depends. If you are jumping for peak power output, then you could step down to minimize wear and tear on the body, and allow yourself to recover between reps. If you are looking for endurance (or if you need to do multiple jumps in a row for time), then maybe jumping down is an option. Note, that jumping down does increase the loading and stress on the body, so if you are doing high volume box jumps, stepping down may be a better option for most people.