BioTrust has some big names behind it. It was founded by Joel Marion with the support of bestselling fitness author John Romaniello, and it’s the favorite protein powder of entrepreneur god-king Tim Ferriss, who has gone on record saying he likes the fact that it’s processed at low temperatures and that its contains a blend of fast and slow digesting proteins. Today, we’re trying BioTrust Low Carb protein powder.

It’s certainly not your average protein powder. So what makes it so desirable?

I picked up the Chocolate flavor, and a two-scoop serving of BioTrust contains 150 calories: 24 grams of protein, 8 grams of carbs (4 grams of fiber), and 2.5 grams of fat (1 gram of saturated fat).

It’s very high in calcium, with 35 percent of your RDI in one serving. (Usually, protein powders have closer to 15 or maybe 20 percent.)

It’s not especially low in cholesterol or sodium, though, with 10 and 8 percent of your recommended daily intake in each. Besides 8 percent of your daily iron, there’s not much else to talk about as far as macro and micronutrients.

Then there are two unusual ingredients. The first is Swerve®, a low-calorie sweetener made from erythritol (a sugar alcohol) and oligosaccharides, sweet fibers from fruits and vegetables. Unlike some artificial sweeteners, Swerve doesn’t spike blood sugar.

The final ingredient is ProHydrolase®, a digestive enzyme blend that I’ll discuss in the next section.

[See our roundup of the best whey protein powders]

With that many carbohydrates it’s far from the lowest carb protein powder I’ve seen (there are plenty with zero carbs), but the 4 grams of fiber it could make it more satiating than some of the extremely low carb powders out there.

I think that’s also why more than a quarter of the protein content is casein. The brand seems to be targeting people trying to lose weight, and the fiber and the slow-digesting casein should help with satiety better than, say, a no-carb no-fat whey isolate.

It’s also made from dairy sourced from free range cows that aren’t treated with antibiotics or hormones like rBGH, or rBST.

Then there’s the digestive enzymes. ProHydrolase doesn’t say exactly what’s in their blend, which is annoying, but there are a lot of studies on their site that show it’s more effective than competitors at reducing digestive discomfort and reducing the amount of amino acids that get excreted out of the body, i.e. it helps you absorb more protein. They don’t provide the studies on their site, but they are available at request.

You can buy one little tub of 1.2 pounds for 49 dollars on Amazon. One serving is very large — it’s two scoops — and 1.2 pounds only provides you with 14 servings. So it winds up at $3.50 per serving or 14.6 cents per gram of protein. There are no larger tubs.

That’s the most expensive protein powder I’ve ever seen. I’ve reviewed well over two dozen different kinds of whey proteins and thus far, the most expensive I’ve found was Ultimate Nutrition’s IsoCool, which clocked in at 9 cents per gram of protein, followed by PrettyFit’s whey isolate which was 8.3 cents per gram of protein. And neither of those products have any carbs or fat at all, plus they’re cold-filtered and have no artificial flavors or sweeteners, just like BioTrust.

When comparing BioTrust to other protein blends the price difference is even bigger. The standard casein-whey blend protein powder, like Syntha-6 , is under 4 cents per gram of protein and pricier blends like Quest and Jym are between 5 and 6 cents per gram. (Those do have the artificial sweeteners, though.)

It mixes great, but I do want to point out that with such a large serving size, you’re going to wind up with a very thick shake. There was a really big difference between mixing it with  a little over a cup of water — which wasn’t too thick at all — and mixing it with two percent milk, which was very thick. Make big shakes.

Not great. I was honestly surprised because I know this contains some cutting edge natural sweeteners, but then I remembered that they’re natural sweeteners. With water, it was bland but inoffensive. With milk, it tasted like chalky cocoa.

BioTrust Low Carb is satiating, it mixes well, and — while it’s hard for me to definitively know this — it digests very well, probably better than most protein powders on the market.

But it is expensive. Digestibility aside, it costs three times more than many other protein powders I’ve liked. There are other cold-processed, all natural protein powders made from free-range, hormone-free dairy (like Xwerks or Muscle Feast) that are less than half the price of BioTrust.

At the end of the day I think the main thing that makes BioTrust stand out in the market is the digestive enzyme blend. 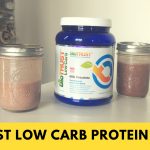