Pro Jym is the brainchild of Dr. Jim Stoppani, a man with a PhD in exercise physiology and a long tenure in fitness media. He was the senior science editor at Muscle & Fitness and Flex for over ten years and he co-wrote the New York Times bestseller LL Cool J’s Platinum 360 Diet and Lifestyle.

In 2013, he launched a supplement line called Jym, which is well-known for its pre-workouts but also includes multivitamins, fat loss pills, and testosterone support. I decided to try the flagship protein powder: Pro Jym.

One scoop provides 150 calories and 24 grams of protein, plus 6 grams of carbs (2 grams of fiber and 1 gram of sugar) and 4 grams of fat (0.5 grams of which are saturated). So it’s  not crazy low in calories, fat, or carbs, Dr. Stoppani has said that this is because it’s intended more as a versatile, slow-digesting “any time shake” than a strict, fast-digesting, nothing-but-protein shake.

There’s a lot to talk about with the ingredients.

After that, there’s Clean Cream™, a vegan blend of powdered fats that’s intended to give a creamy taste without any, well, cream. It’s made mostly from sundlower oil, acacia gum, brown rice syrup, natural flavors, silicon dioxide, sunflower lecithin, and D alpha tocopherols — that’s just a fancy word for Vitamin E. I have the Chocolate Mousse, Tahitian Vanilla, and Banana Cream flavors, all of which contain Clean Cream.

Then there’s natural and artificial flavors; a gum blend of cellulose, xanthan, and carageenan (those are thickeners and stabilizers); salt; sunflower lecithin for mixability; the artificial sweeteners sucralose and acesulfame potassium; and silicon dioxide, which is usually used as an anti-caking agent but it can also help to carry flavor.

It’s cool that this is a blend of whey, casein, and egg; it means the whey isolate absorbs quickly and the egg and casein absorb slowly over a few hours, so it’s a good “anytime” shake and it’s less likely to cause an upset stomach.

That said, Pro Jym doesn’t contain any digestive enzymes, which is rare today. Dr. Stoppani addresses this directly on his site, basically saying that he thinks studies on supplementary enzymes are flawed and it’s not worth including them. He also says that digestive upset is less likely with a blend and that his protein contains under a gram of lactose, so it shouldn’t cause issues. But it does contain lactose, so if you’re extremely sensitive to it, you might have some trouble with Pro Jym.

Jym has a reputation as expensive, but it’s honestly not that expensive. Sure, most common protein powders are between 3.5 and 4.5 cents per gram of protein, but 5.1 isn’t a giant difference. Jym isn’t as cheap as brands like Optimum Nutrition and Musclepharm, but it’s cheaper than Dymatize, Prettyfit, Quest, Ghost, and most of the more “boutique” brands like Xwerks.

So, Pro Jym is pricier than normal, but it’s far from outrageous.

I was very excited to try Pro Jym, as I’ve heard great things about the taste and my curiosity was piqued by the “Clean Cream” in the ingredients list. I found that while it was tasty, it tasted a little like Space Food — I could taste the artificial sweetener. It’s better than some of its competitors like Quest protein powder, which also contains a lot of casein and tastes dreadful, but I found it wasn’t as tasty and milkshakey as your average chocolate from Optimum Nutrition.

Pro Jym is slightly pricier than average, but you’re getting a very high quality protein that can be consumed at any time of the day and should affect satiety (and prolong muscle protein synthesis) better than your average brand. I wasn’t that impressed by the taste, but I was really impressed by the science. 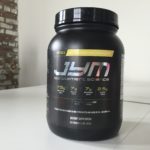