We decide if this hugely popular whey is worth the hype.

Of all the protein powders on the market, Optimum Nutrition’s Gold Standard whey protein may be the best-known and most widely consumed. It’s the number one seller on Bodybuilding.com and Amazon, but we were curious — is this really a great product, or is it just the most popular? Does it deserve its spot as the default whey protein powder used by millions?

We decided to take a harder look at the crowd favorite and found that it’s very well priced, has great macronutrients, and scores very highly for label accuracy — three qualities that rarely intersect in the whey protein industry.

Let’s start with the basics:

One rounded scoop delivers 24 grams of protein, 3 grams of carbohydrates, 1 gram of sugar, and 1 gram of fat. Various independent tests have shown that it may be closer to 21 or 22 grams of protein per serving, a difference that’s actually pretty negligible in the supplement world — ON is considered a company that has a good track record with third party testers.

For something so popular and so inexpensive, the ingredients list is surprisingly short. Let’s look at the Double Rich Chocolate flavor’s ingredients list: first there’s a protein blend of whey protein isolates, concentrate, and peptides; then cocoa, lecithin, natural and artificial flavors, acesulfame potassium, Aminogen, and Lactase.

So what does all that mean? Of these three kinds of whey, whey protein isolate has the highest percentage of protein, though the process to make it reduces a lot of its other ingredients that can promote overall health and immunity, like peptides. Concentrate is the cheapest form of whey and while it has less protein and more fat per gram than isolate and peptides, it contains more ingredients with potential health benefits like CLA and phosopholipids. Whey peptides are pricier but also more broken down — some call it “pre-digested” — so they absorb quickly.

Each form of whey has its own benefits and drawbacks, so combining them all together is a smart tactic.

Regarding the other ingredients, lecithin is used to improve mixability, Aminogen is a blend of enzymes that should help to digest the protein and reduce gas, and Lactase should make the lactose easier to digest. The acesulfame potassium is a sweetener — about 200 times sweeter than sugar — that’s controversial in some circles but appears to have no negative effects at low levels.

As mentioned above, the blend of three kinds of whey helps to make this a very well-rounded product — contrary to popular belief, there’s no one “best “ kind of whey, they each come with their own benefits, and mixing them all was a smart move by ON.

Many of the benefits associated with this product simply come from the fact that it contains whey, which is a high quality protein that contains Branch Chain Amino Acids and other non-essential amino acids like glutamine. I’d have trouble calling this a “benefit” since that’s just what whey is.

One scoop delivers 24 grams of protein, 3 grams of carbohydrates, 1 gram of sugar, and 1 gram of fat, making this a solid choice for folks on low-carb diets or low-fat diets.

The Aminogen and Lactase should help to improve digestion, but besides that, there’s not a lot else in this product: it’s several kinds of whey and some enzymes to help you make the most of it.

In your average supplement store, tubs vary from two to five pounds and if you’re willing to buy five pounds of the stuff, you can get 73 servings for $58. That’s 79 cents per serving, or 3.31 cents per gram of protein.

Ten-pound bags of 146 servings are also available on Bodybuilding.com for 112 dollars, or 3.2 cents per gram of protein, but that’s an awfully large bag for a pretty small price difference.

It mixes well with both water and milk, likely due to the lecithin, which helps to improve mixability. I typically shake up my protein in a mason jar, but even if you’re just stirring with a spoon, it dissolves nicely into the fluid — just make sure you’re stirring fast!

We purchased the most normal-sounding chocolate we could find: Double Rich Chocolate. Despite the “double” in the title, it’s tasty without feeling overwhelmingly sweet or intensely flavored, and it’s closer to a dark chocolate taste than milk chocolate. If you’re after a sweeter, creamier, more intense chocolate, you might prefer the equally popular Extreme Milk Chocolate flavor.

There are some flavors we’ve tried from ON (like Cake Donut) that are nice as a one-off, but easy to get sick of after a few shakes. Double Rich Chocolate is ON’s standard, basic chocolate: reliable and mild enough that it won’t overwhelm the palate and you probably won’t get tired of it.

Note that the flipside of this “low intensity” chocolate is that it’s very, very bland when mixed with water.

Optimum Nutrition gives you what it promises: a no frills, dependable whey protein powder. It’s not just reliable, it’s inexpensive and tasty, too. It’s hard to find fault with Optimum Nutrition’s product; if there’s an industry gold standard, this may just deserve the title. 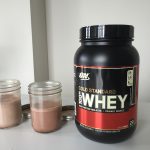