Based on that decision, the Russian Weightlifting Federation held the Grand Prix “Geraklion” in the suburbs of Moscow. The top 3 male and female athletes based on Sinclair won cash prizes of:

While no official results have been posted online as of this writing, Russia’s Fit League posted a video (embedded below) of over 2 hours of the competition. The Fit League is a fitness style competition that includes many of the gyms and CrossFit locations around Moscow, including Dimitri Klokov’s Baza Team.

The athletes who were introduced included:

After watching the video, the un-official results that I tabulated are as follow: 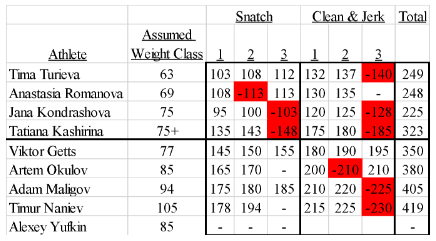 Based on the results of the 63KG session at the 2016 Olympics, Turieva’s 249KG total would have won a silver medal behind Deng Wei of China, if all things stayed the same.

Romanova’s 248KG total probably would be outside the medal range in Rio, while Kashirina’s 323KG would likely lock down the gold medal. My assumption is that none of these athletes really lifted to the best of their abilities due to the emotional toll of being banned from the Olympic Games. (Just my assumption.)

On the men’s side, everyone lifted reasonably well. Maligov’s 405KG and Naniev’s 419KG total total would have won medals at the 2015 World Championships in the 94KG and 105KG categories, respectively.

Noticeably absent from this event were Oleg Chen (69KG) and David Benzhanyan (105KG). On August 1st they submitted a joint letter to the Russian Federation saying they would be ready to fly to Rio to represent their country at the spur of a moment if their appeal was granted.

Top 3 men based on Sinclair Formula were:

Top 3 women based on the Sinclair Formula were: