You’ve never heard of me. My name never made it into a Regionals Recap, and my photo never graced HQ’s news feed. On the street, I don’t turn heads with my physique like my contemporaries (in name only), Brooke Ence and Brooke Wells. But, I’ve been to Regionals, and the whole to-do made me feel very fit and very fancy.

Last year, I was the only rookie on a team that placed 15th at the East Regionals. I warmed up right next to the silver winning team at the 2015 Games, CrossFit Milford, and brushed elbows in the training hall with Mat Fraser and Michele Letendre. Har har.

Of course, they get all the fanfare and media coverage because, you know, they’re better. But in my brief moments of fitness célébrité, and by that I mean the three seconds between when Dave Castro gave me a fist pump and complimented my awesome shirt, I had it all. I was damn proud not only to have trained to get to Regionals, but to have made it to the last day. 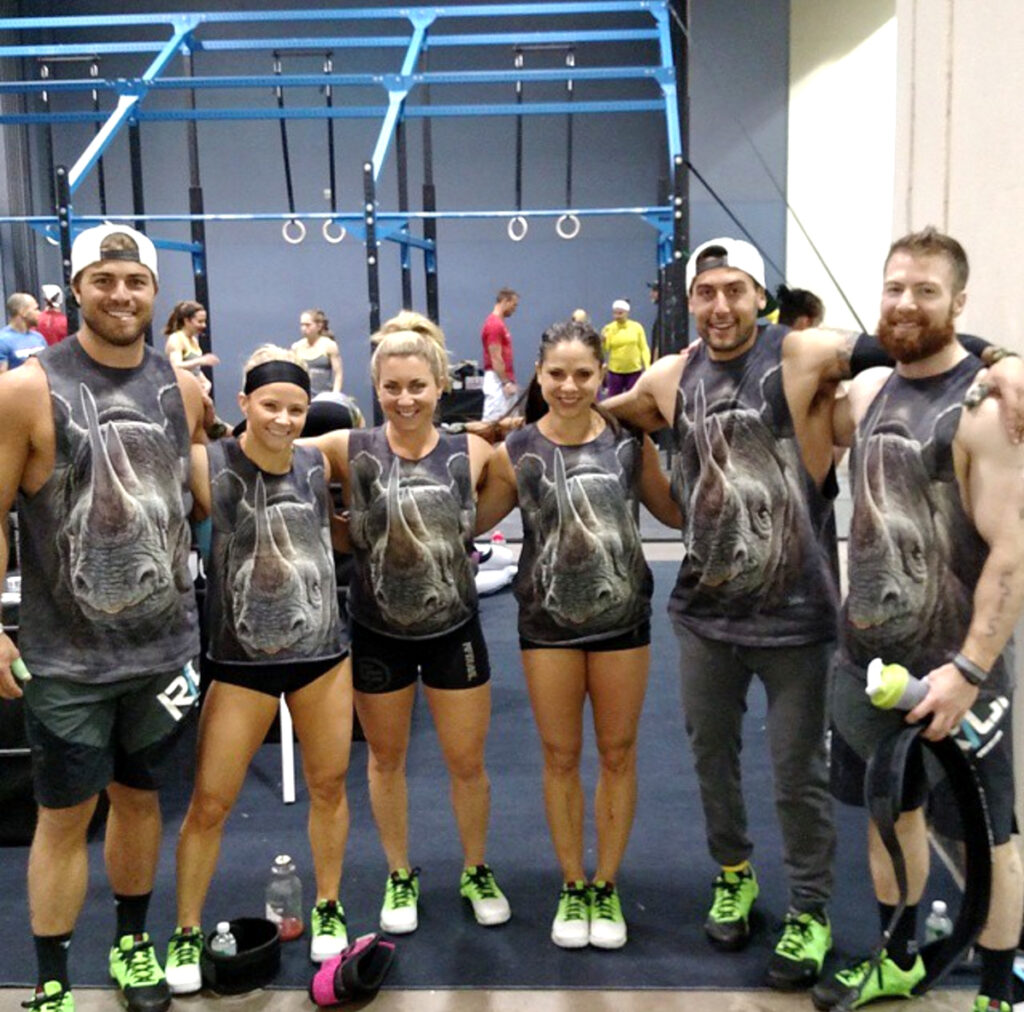 (I’m 3rd from the right. What a majestic rhino.)

That feeling was squashed about five minutes later during Event 6 when my muscle ups were no-repped more times than they were yes-repped. At that point, I was ready to punch Dave in the face.

So goes the ups and downs of Regionals weekends.

As we enter into the 2016 Regionals season, hundreds of people you’ve never heard of will take to the floor and experience something that very few CrossFit athletes ever get to experience. It is awesome (even if Castro doesn’t like your shirt), but it’s also a completely bi-polar experience — in ways you’d never expect based on what you see on the live stream.

…there’s a lot of waiting around.

During the Behind the Scenes of the CrossFit Games documentary, we see the athletes waiting in their little corrals like cattle. The same thing happens at Regionals as well, but what I didn’t realize until I got there was that you’re waiting in those corrals for the majority of the previous heat. For longer workouts, that could be up to 20 minutes of keeping warm, resisting the urge to throw up, and convincing yourself that you don’t have to pee (again), all while stuffed shoulder to shoulder with your sweaty teammates.

Every morning, there’s also a required Q&A for athletes that goes over workout standards. These meetings are 100% necessary, of course, but like the Q&A brief before the SAT exams, this overview somehow lasts a half hour longer than needed. There’s always that one guy with a dumb series of questions:

Bro: “So it’s chest to bar right? What if we just touch the collar bone?”

Head Judge: “It’s a chest to bar. Your chest has to touch the bar.”

Bro: “Right, but what if it’s just my upper chest, like my lower neck?”

Head Judge: “If your range of motion prohibits you from…”

Bro (interrupting): “Nah, I mean hypothetically, what if my lower neck touches?”

Head Judge: “It’s a chest to bar. Your chest has to touch the bar.” 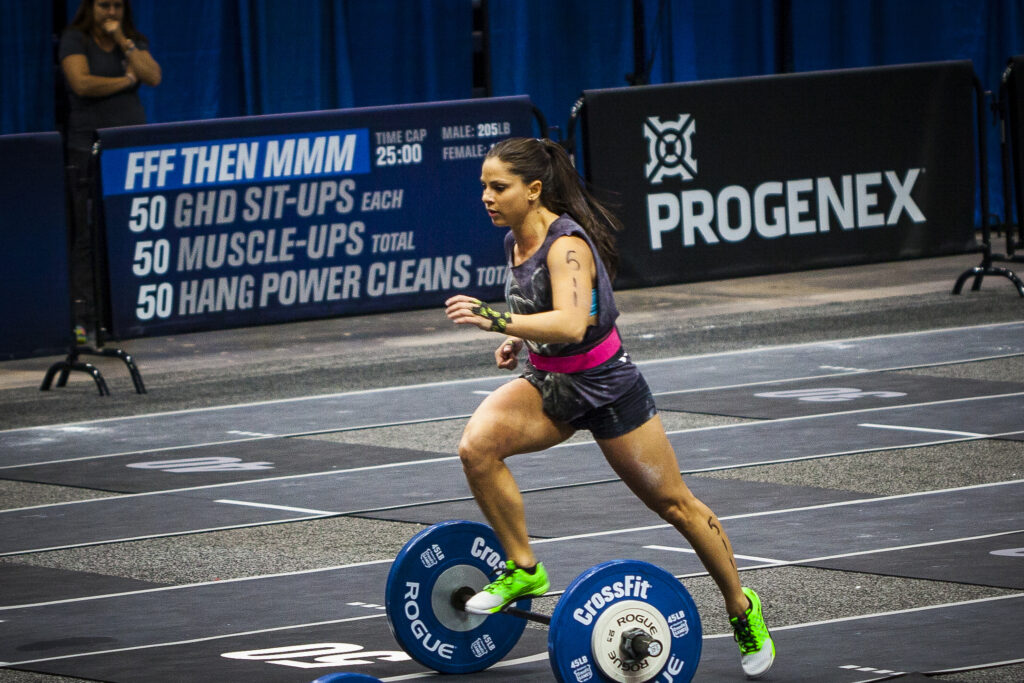 There never ended up being much time between Bro Question orientation and the first heat. Even with an hour in between the brief and the first heat, by the time you get your stuff, get bodywork, and wait in line for equipment in the training hall, you end up with twenty minutes or so to actually warm up.

The training hall also turns into a mini CrossFit Reunion, so unless you and your buddy from another box are catching up on the only two Assault Bikes available, your twenty minute warm-up quickly turns into fifteen minutes of chatting and five minutes of snatching.

The TrueForm Runner is a machine that I can only assume was originally used as a government torture device, and then somehow Castro got a hold of it which ultimately lead to Event 3 carnage.

Event 3 was also the only time when I got significant camera time. What a thrill.

I knew that camera guy was there, so I held back the expletives. But inside, oh, I was regretting every decision that led me to that point. Nightly bottles of wine and take out pizza is always a good idea, Brooke. Think of all the new clothes you could wear if only your shoulders fit through the armholes, Brooke. You could have just gone for a leisurely .4 mile jog in the park, for free, Brooke.

You’ll notice perky, blonde Christina and the bearded ghost-milk creature Jay Adams behind me, likely talking about why I was still “running.” Then the camera pans out to the best running form of all time. I call it the “wounded gazelle.”

…when things aren’t going well, being by yourself on the floor is incredibly lonely…

After the “run” in Event 3, I had to tackle 40 wallballs. This part of the workout was really the only time during the weekend where my teammates were not nearby and were also waiting for me to finish before the next person could go. I could see them yelling and gesturing from 50 feet away, but I couldn’t hear them.

I’m short, so I hate wall balls on a good day, but throw in a TrueForm experience and an unusually high target (10’ vs 9’) and it’s pretty much my nightmare. I remember staring at the ball and feeling abandoned, like the kind of abandonment when your mom forgets to pick you up at school. I was letting down my teammates, letting down the people who traveled to watch us, and letting that you can’t do this voice in my head actually win.

These thoughts likely lasted for only a few seconds, but as one of my clearest memories of the weekend, it may as well have been twenty minutes.

In that moment, physically getting passed by other teams validated the insecurities I’d had about not belonging. I wish I could say I snapped myself out of it to finish the workout, but that’s not what happened. My judge picked up on my mental state and started encouraging me in the same way a teacher comes out to sit with the forgotten kid.

And of course, the aftermath was captured for all to see. Look at that happy face.

…but there’s always a chance to turn things around.

Going into the weekend, everyone knows if they have a shot at the podium. Our only shot was if the top 5 teams all contracted the same strain of norovirus. If it weren’t for a debacle during Event 1 where we asked the Head Judge to get involved, we probably could have cracked the top 10. But, after coming in nearly last on Event 3, it just didn’t matter. Let’s be honest, anything below 5th place really doesn’t matter in the grand scheme of things.

At that point, it’s all about little victories and having fun…hence the shirts. We all hit our snatch numbers on Event 4 and PR’d our Event 5 handstand walk time which bumped us up quite few places on the leaderboard.

Even in a big arena, the actual warm up and athlete area is relatively small. When we showed up on Day 1, we triumphantly parked our stuff right by the trash cans because it was the only 5’ x 5’ spot open. At least we didn’t have to fight for that prime spot everyday.

…but there’s plenty of athlete support.

The staff, therapists, and medical team were outstanding. Despite a few hundred athletes, I never waited for body work or medical, and the care they provided was top of the line. This was particularly important because all of the equipment on the floor was brand new, which meant that I had seven successful opportunities to rip open a body part bleed all over the grippy pull-up bars and gnarly knurled barbells.

…you never get to see the official photos.

All of those amazing photos on HQ’s Facebook? There’s thousands more floating around don’t make the cut. For those of us who aren’t CrossFit darlings and don’t already have a million pictures of us exercising, it’s sad to know that there were special moments caught on film that we’ll never get to see. (The few pics from this article were thanks to my friend and colleague, Lisa Hafener.)

After Event 2, I believe, myself and my two teammates all ran across the finish line and collapsed from adrenaline-filled exhaustion. Breathing too hard to form words, we joined hands as we shook out our legs. Shaun Cleary ran over and snapped a few photos of our team, capturing one of my favorite moments from the entire weekend.

Of course, that photo never made it to the highlight album, so it exists only in my muddled, fuzzy, post WOD mind.

But who knows, maybe we all had double chins and looked like we were dying of dysentery. During Regional’s weekend, anything is possible.