Capturing the World’s Fittest: An Interview with Photographer Preston Smith

You might not know him personally, but we can almost guarantee you’ve seen his work. In the past two years, Preston Smith has become one of the most prolific go-to photographers for competitive fitness, capturing the world’s top competitors in their most epic moments.

But it’s not all glitz, glamor, and headshots. Smith’s line of work can be a dangerous one, and the best shots often come with the most risk as hundreds of pounds of weight and bodies move at high speeds on the arena floor. Shooting fitness competitions hasn’t just sharpened Preston Smith’s eye for movement; it’s given him a striking awareness of how to capture people moving through space while staying out of the line of fire. 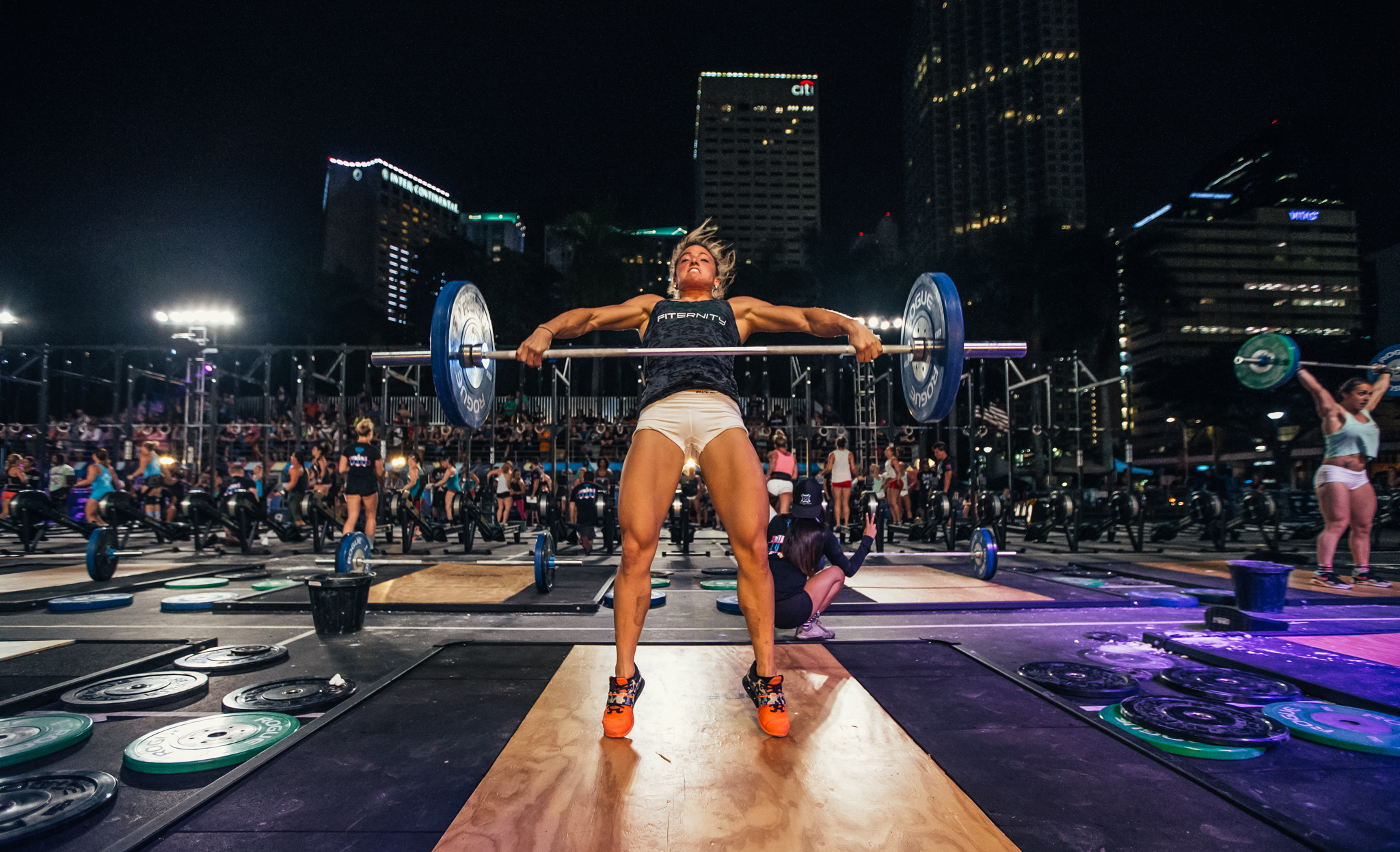 We caught up with Preston to chat photography, CrossFit, and what he sees as the next great arena in fitness media. Read below to get the inside scoop from behind the lens, including some eye-popping samples of his recent work. 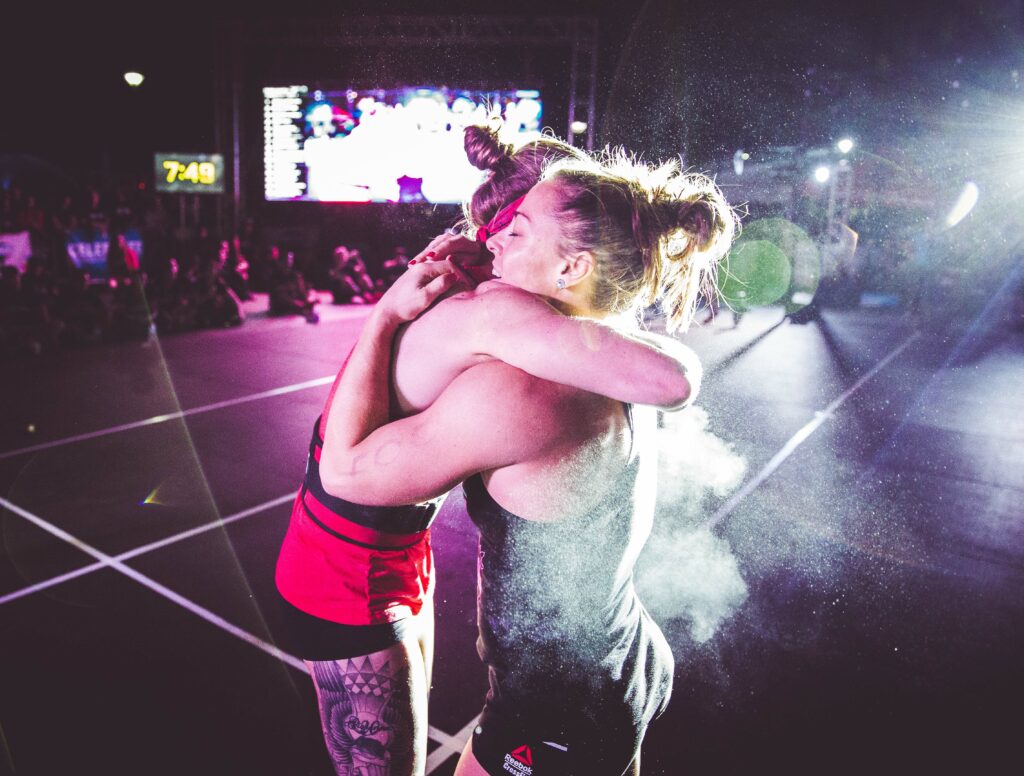 How did you get started in photography?

I had ADD as a kid, I had a short attention span. Doctors tried to prescribe medication but my parents were like, “Nope, he gets good grades, we can find other ways to keep him occupied.” So because of the way I’m wired, I’ve always been a very visual person. We had National Geographic subscriptions when I grew up, I love thumbing through the photos though I hated reading it. The landscape and animal photography was amazing, I was constantly looking through them to get a feel for the photos.

As I kid, I didn’t play any instruments, I wasn’t particularly good at drawing, I never had an artistic outlet, I just had sports. So what was a catalyst for my photography, about two years into my marriage with my wife, we got a dog, and I wanted to document how the dog grew up and have photos of that and married life. Then I got a basic D3000 Nikon with a kit lens. And because I was doing jiu jitsu at the time, I was always going to competitions. So shooting pictures for my friends and of matches, I’d load those up on social media, and I started getting good responses, people liked the content.

So a year down the road, I started taking more photos of competitions, and people offered to start paying me to shoot their matches, it just snowballed from there. I started shooting matches, got better equipment and a better camera.

Eventually I had to sit down with my wife and have a conversation to say this is something I’m good at, this is something I want to do. I had to convince her to let me drop a couple grand on photography equipment, and I finally got myself some pro equipment and jumped in to see what I could do with it. 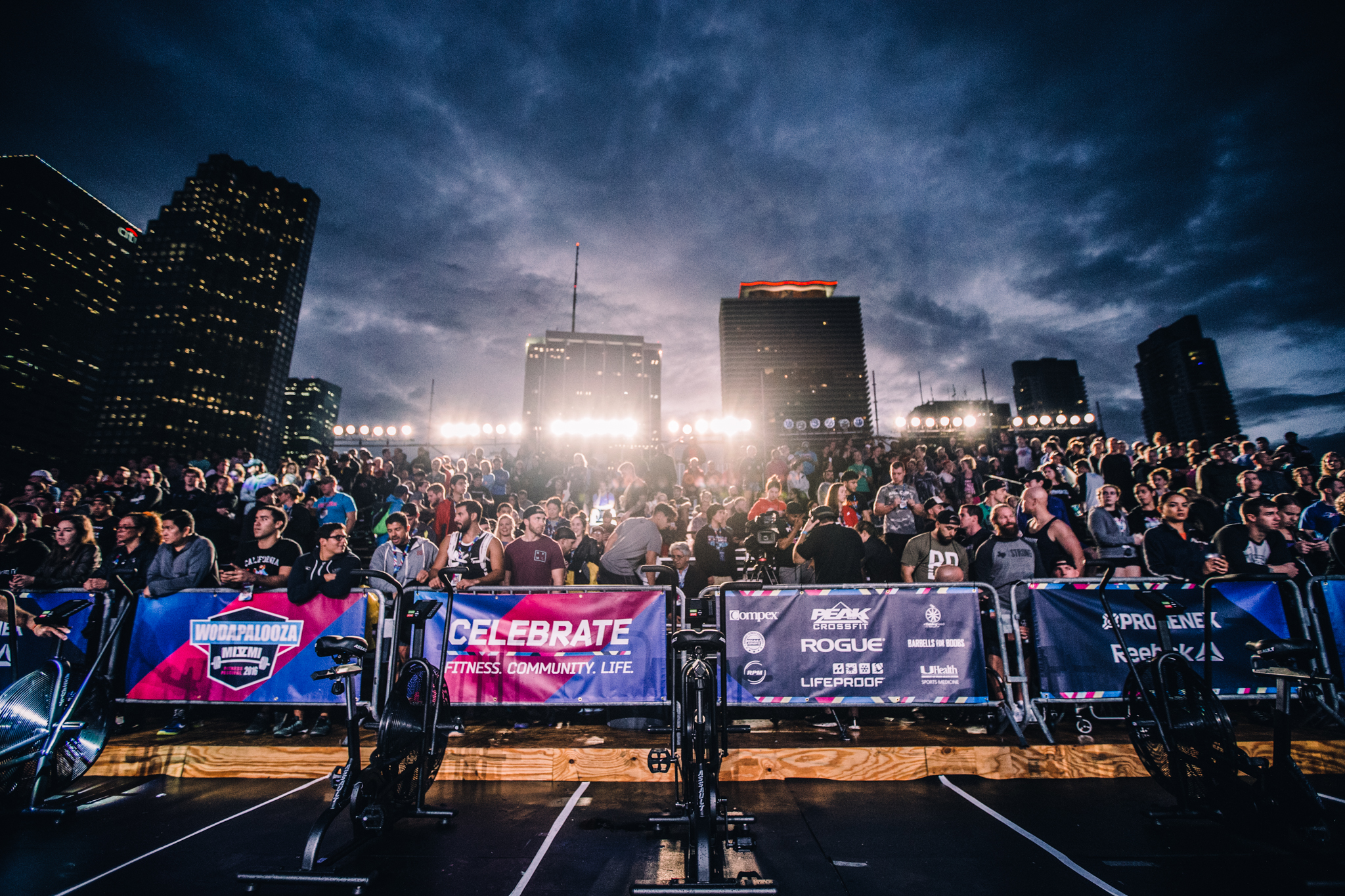 How’d you get exposed to competitive fitness beyond jiu jitsu?

When I was training in jiu jitsu really heavily, CrossFit had really started to take off, this was back in 2010 and 2011. So among the guys I trained with, one of them owned a CrossFit gym, and a bunch of guys were doing it. I wasn’t a full time athlete by any means, I had a full time job, and jiu jitsu was plenty of training for me, though I had an awareness of what it was.

Then a buddy of mine I trained with, GW, who’s one of the original founders of Kill Cliff and a very talented jiu jitsu athlete, he exposed me to the scale of CrossFit and the amount of business that was in there. I hit him up in January of 2014, and I said, “You’re sponsoring this competition up in boston, the East Coast Championship, can I shoot for you guys?”

And he was into it, I got my ticket, and the East Coast Championships were the first thing I ever shot. I got into the fitness side of photography wanting to shoot for Reebok. I thought by going to Boston, I could achieve one of my goals, which was to shoot for Reebok. I figured I could make connections there, there were a bunch of heavy hitters competing. At the time, I only knew of a few top athletes, but they were there. 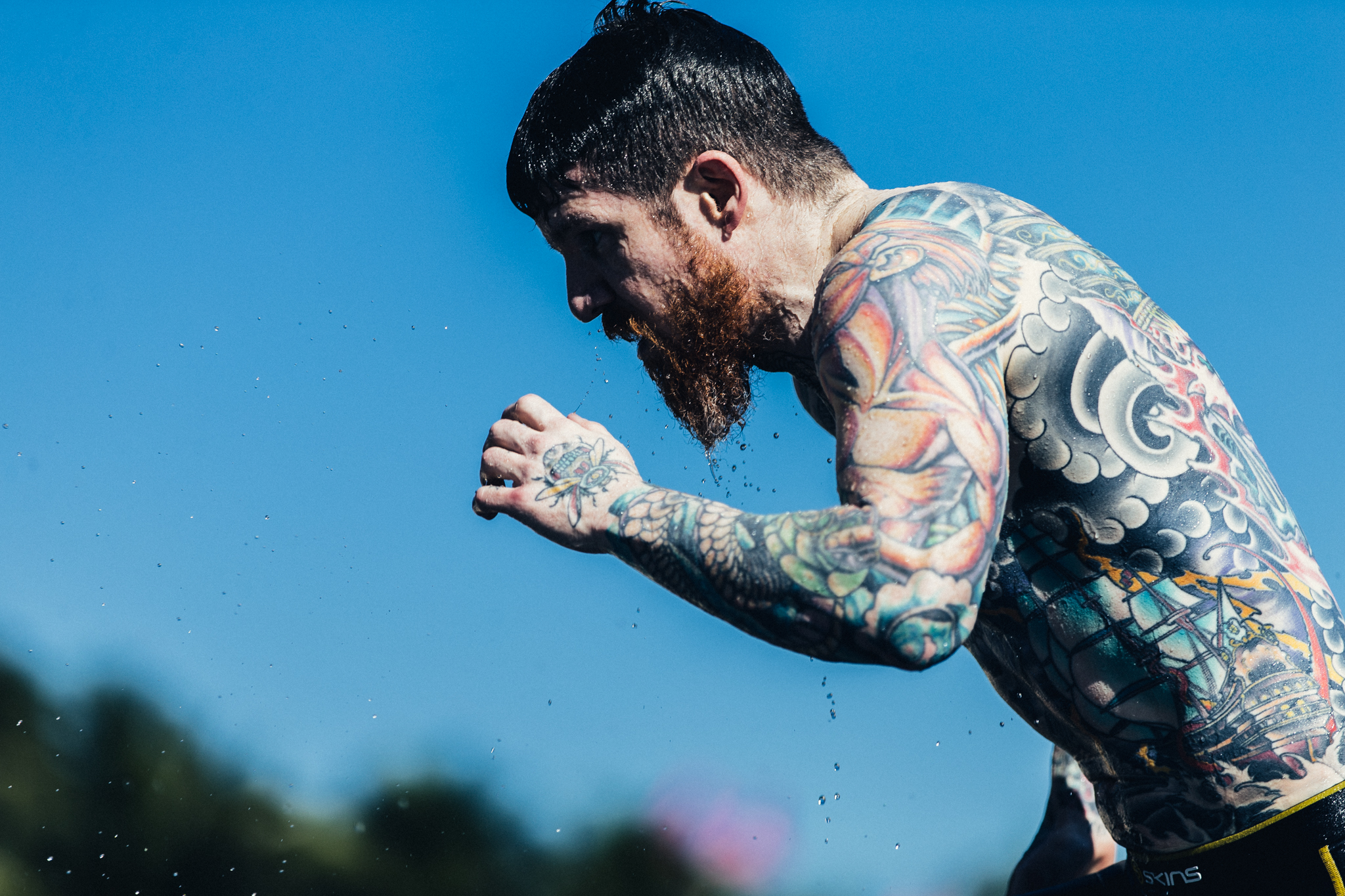 Sure enough, got some great pictures at that event, and I was able to find out who I needed to talk to at Reebok. I was able to pester that person for a year, and I got a gig with them! And I do mean pester.

What are some of the biggest challenges in photographing fitness competitions that people don’t expect?

The one that really comes to mind, especially now because of where competitions are going and how big they’re becoming, is access. It’s getting much more difficult to have access to the immediate floor, to get the good photos. You can shoot from the stands and get great stuff, but to shoot at Regionals, first of all you’d be shooting for one of the Tier 1 sponsors or you can only shoot with a certain size camera and lens from the stands.

That’s really becoming a challenge, getting access to the floor so you can have a better chance of getting those photos. Now access isn’t absolutely everything, but for some of the bigger competitions – Wodapalooza, the East Coast Championships — it really is a big, big factor. 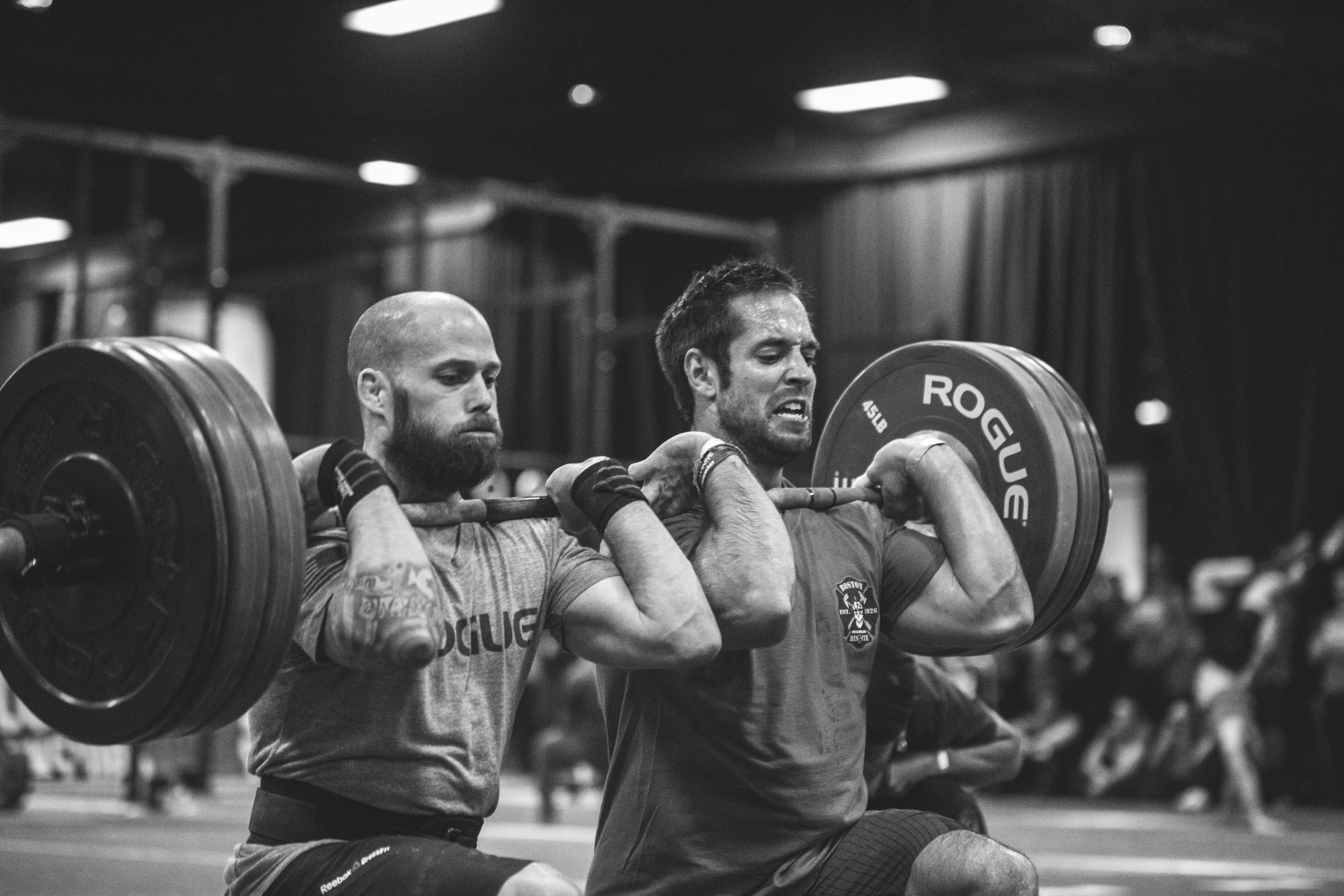 Yeah! Some events allow you to roam the floor, that’s the case at Wodapalooza, but you do have to be hyper vigilant. I’ve had a few cases where a barbell drops behind me, and I realize I need to be more careful of where I’m standing. Sometimes an athlete will run behind or try and get you out of the way. I try and avoid that, but sometimes it does end up happening.

Once you shoot a couple competitions on a regular basis, you build friendships with a lot of the athletes, you build relationships, and they get much more comfortable with you being around.

But you do have to be careful, it can be dangerous. A barbell dropping on your back or on your leg can injure you for life. It comes down to being smart and weighing the risk/reward of getting the shot.

Have you shot any other strength sports?

Yeah, the only other one I’ve shot is a strongman competition in Atlanta, and that was pretty interesting. Guys picking up the big Atlas stones and doing the heavy farmer’s carries. I would like to get into more of the Olympic lifting. That to me is fun to watch, and you see guys like Hookgrip doing a really great job.

Again, at those competitions it comes down to access, can you get a media credential to get in. That’s the main barrier to entry, but there definitely is a desire to do more of that, whether it be video or stills.

Let’s talk a little about video. Where do you see fitness photography and video going over the next few years?

Look at what CrossFit HQ does. They’re almost a media company, more than anything else. You look at their partnership with Western Digital, that partnership makes sense, because they have such a massive, massive amount of storage needs, they’re doing all that live streaming on a regular basis for Regionals and the Open. If you look at where they put most of their time into Regionals, it’s video, telling those stories and keeping people engaged.

Facebook rewards people for video content, so there’s that benefit, outlets want to drive video content. People have a short attention span, and Instagram has those short clips. You get a lot of engagement from video, and companies want that.

It seems like a natural progression, how things are evolving. I shoot a lot of weddings, and I like telling those stories, and video lets you tell those stories more fully. You get that emotion, even if no words are spoken.

There’s also that learning curve. You can shoot video, but how do you do it well? How do you get the technical, post-production skill set? It’s a lot to learn, and you learn as you go. After every shoot, there’s something you realize you could have done better, or prepared better for, or planned better. But people, we have a short attention span, especially on social media. Video can capture those things and emotions in digestible portions.