Do Women Who Arch in the Bench Press Get More Hate Than Men?

The Roosevelt Arch, the Gateway Arch, L’Arc de Triomphe. All very famous arches that are adored around the worldwide. However, when it comes to powerlifting, some people aren’t so supportive of these feats of flexibility and strength.

To arch or not to arch? It’s a question that’s continuously being asked in the fitness world. There are hundreds of articles about the pros and cons of bench pressing and there are even more about arching. It’s kind of a saturated topic, especially if you include keyboard warriors with their “expert opinions” they received from the University of YouTube.

That’s why I’m not here to debate the arch. I am here to take a look at female powerlifters, in particular the negative comments they receive over social media for their impressive arches. As the sport grows and gains exposure, it’s only inevitable that so too will the number of arch haters. But is the criticism applied equally to both men and women?

[So is arching in the bench press unsafe or cheating? Learn the facts here.]

Scrolling through Instagram one day I saw the video of Emily Hu above, a world record holder in the bench press, pressing an ungodly number of LBs (286 of them for 6 reps at ~55kg bodyweight). I just had to comment with a mix of heart emojis and smiling faces but to my surprise, not everyone felt the same.

I was shocked. So, I decided to find out if this was something female powerlifters face on the daily. After much fangirling and messaging I managed to catch some of the strongest ladies in the world to discuss the topic. 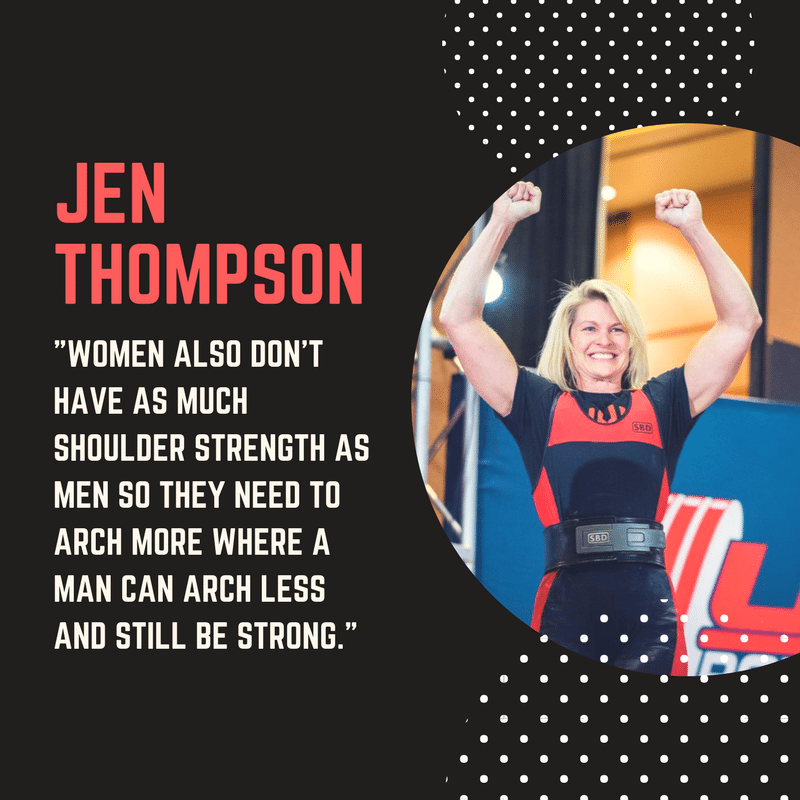 Do you ever get negative comments about your arch?

I will occasionally get crap for my arch. Although I don’t really have a large one, especially compared to others. My ROM is never in question because it is fairly long.

If I do get crap it is from men. Mostly I feel it makes them feel inferior since I can lift so much. But it’s like this: There can be 10 awesome comments and 1 negative and we tend to focus on that. So I think there really are only a few people that are making a stink about the arch but they stand out more than others.

[Thompson gives more of her thoughts on arching in the bench in our article, 5 Powerlifting Rules You Should Break.]

Women are generally more flexible than men so the arch is bigger. Women also don’t have as much shoulder strength as men so they need to arch more where a man can arch less and still be strong.

In the bench press you need the arch to engage your pecs more and take the shoulders out of the lift. The pec is a stronger and larger muscle than the shoulders. Men that do not arch would hugely benefit from one if they were willing to work on it. 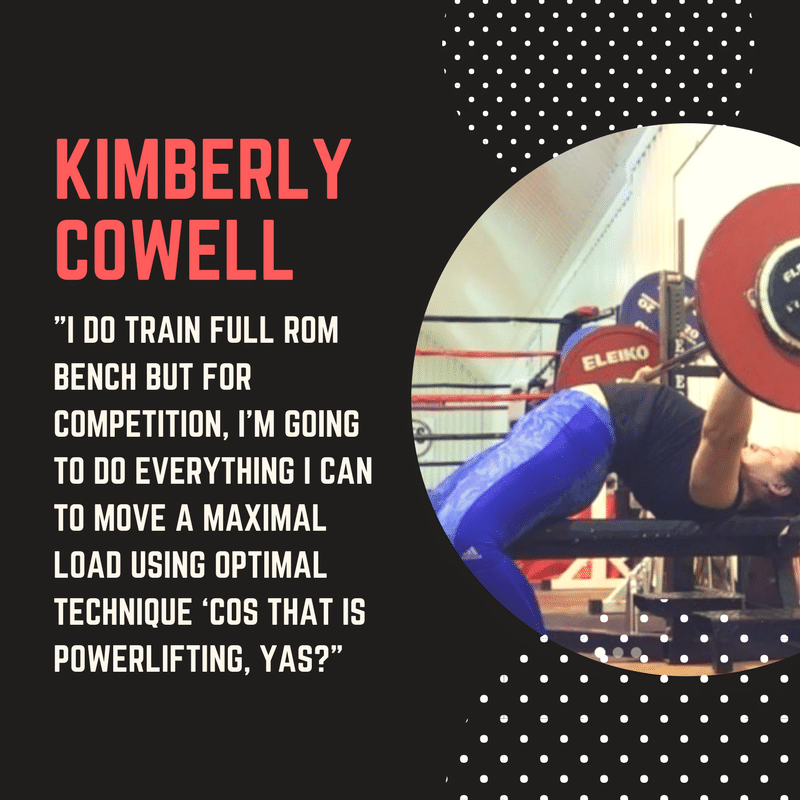 People who don’t know about my sport and have genuine concern/curiosity but accept the explanation. And there are trolls just being dicks. People who can’t arch crying about it being cheating.

I think there are those three camps: the genuinely curious, trolls, and people who are just sad they can’t arch. I see it (trolling) less with men.

I would like to think it’s purely because women tend to be able to arch better so it’s down to that. I haven’t seen any direct comments or evidence that it’s anything beyond that. The IPF page gets trolled so much, men and women. These are elite lifters.

[Read more: 10 female powerlifters share the weirdest comments they hear from guys at the gym.]

Why do you arch? What are the benefits in your opinion?

I can press more and it’s legal in completion. It is entirely safe, the load goes through my shoulders not my back and it allows me to engage my core and get super tight. I think the bench press is the most technical lift in powerlifting and I have spent years nailing a set up and optimum technique. It’s an ongoing process of course and I’m always learning but in the large part, it’s settled over the past year and I’m consistently hitting PBs.

Anything else you would like to say about the topic?

I do train full ROM bench and other variations. I have to. It doesn’t make sense not to but for competition, I’m going to do everything I can to move a maximal load using optimal technique ‘cos that is powerlifting, yas?

Also, I do just have fairly short arms. I recently started to hit some floor presses again and the bar travels to less than an inch from my chest, so yeah, LEVERS! I can’t grow my arms to soothe the ego of some dude on Instagram. 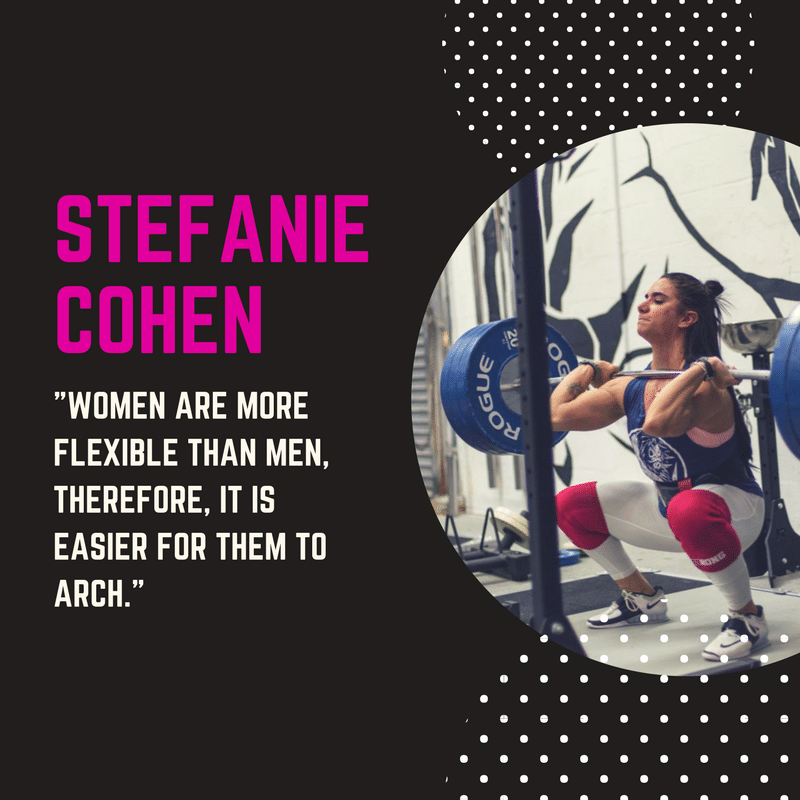 First female to pull a quadruple bodyweight deadlift of 485lbs/220kg at 121lbs/55kg bodyweight.

Have you noticed more trolling around women benching with an arch compared to their male counterparts?

Yes but not because they are women, because it is more frequent to see women arching than men. Women are more flexible than men therefore it is easier for them to arch. Most people who comment about arches have no idea what powerlifting is or its standards.

Do you ever get negative comments about your arch?

I’ve had guys criticize my arch a ton of times but I assume it’s because they’re ignorant and uneducated.

Arch is definitely not cheating. It is legal in all federations. Arching allows the lifters to put their shoulder blades in a position that is biomechanically more advantageous.

Think of the shoulder blades as platforms for the humerus to move. When you stabilize them, this allows the arms to have a solid base or anchor from which to move.

[Stefi Cohen discusses her quadruple bodyweight deadlift and her favorite form of cardio in our interview with her here.] 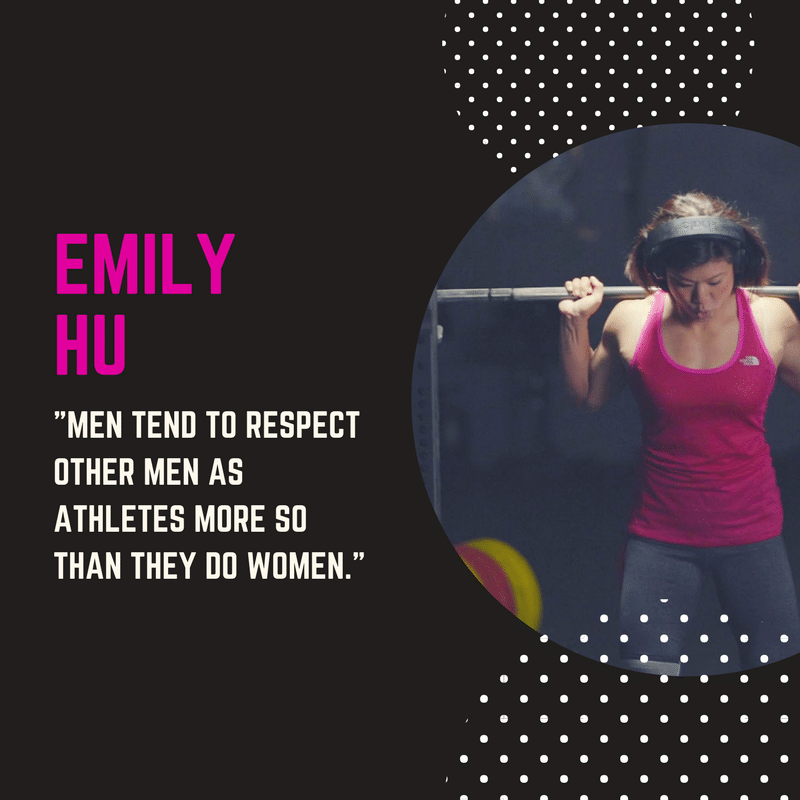 Do you get any negative comments about your arch?

ALL THE DAMN TIME!

Because they are weak and don’t like the idea that a woman can bench more than them so they must discredit her benching. Also, in my experience, men tend to respect other men as athletes more so than they do women.

Arching literally lets me “put my back into it.” When I arch, I use my lats to help control descent of the bar, and that in turns lets me load my chest more efficiently for the press. Also, it does cut the range of motion considerably, making the lift easier. 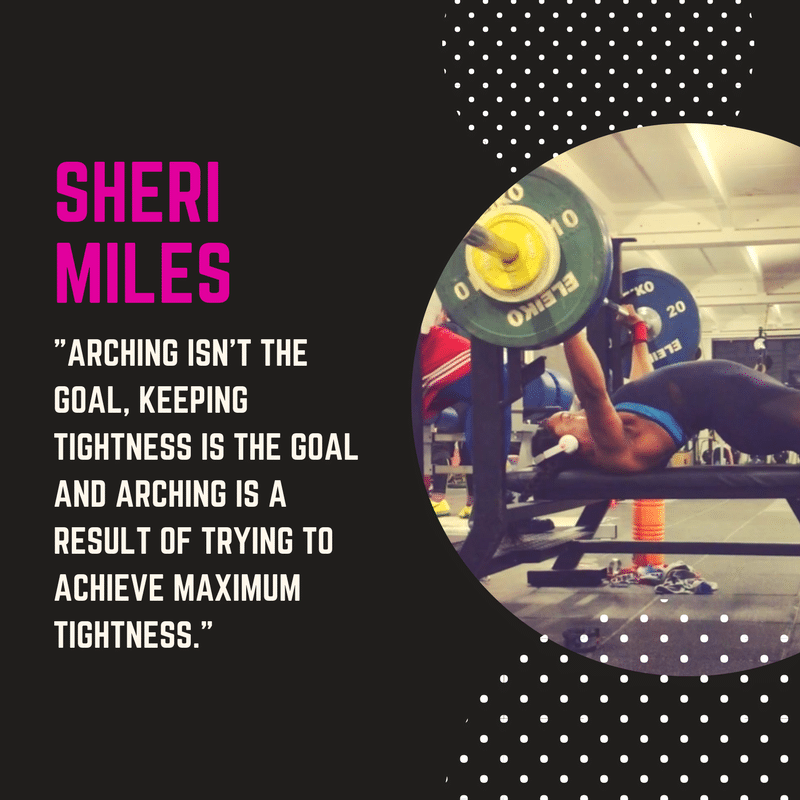 Two-time British Champion and IPF competitor in the 158lbs/72kg class.

Do you get any negative comments about your arch?

Yes, I have noticed this, unfortunately it’s slightly ignorant. It seems that the people who make these comments don’t understand powerlifting too well. I say this to anyone who comments about arching.

Arching isn’t the goal, keeping tightness is the goal.

So negative arching comments completely miss the point at times. It is not a display of flexibility and acrobatics, it serves a purpose: to use your whole body to press as much weight as possible. And to keep more mobile parts of your body stable, such as the shoulders. It’s common knowledge that body tightness serves a solid and stable pressing base.

Is your ROM ever commented on?

My arms are very long, I’d probably have to learn how to bend my back in half to achieve a small ROM, so no I haven’t received much negativity about my ROM but I have about my arch.

Powerlifting is a small fish in a big pond of bodybuilding and general fitness training, so your regular Joe simply doesn’t know, so you can forgive these curious questions. I was once one of those people that would ask a similar question out of curiosity.

Why do you think there is so much negativity surrounding the arch?

In short because bodybuilding style training is prevalent and powerlifting is kinda niche in comparison. In regular fitness or bodybuilding style training, max strength is less important and aesthetics are the desired goal. The bench press has been the biggest bro lift since day one. Ask yourself what’s the number one question in a commercial gym? ‘What’s your bench bro?’ Yeah, I’ve heard that a lot! What’s frustrating is that it’s fine to bench flat back too, it’s just a different style of training and not really to be compared.

Do you think the men get less hate? If so why?

Bench press is often recognized as an ultimate test of strength amongst men, therefore when some men see women hitting huge numbers, I think they’re desperate to find a reason why they’re so strong. I mean it couldn’t possibly be because they are really strong… nah of course, they must be cheating in someway, right?!

Men generally get less hate because their numbers are bigger and arches less obvious at times due to body mass, clothing etc.

Why do you arch? What are the benefits in your opinion?

Back arching whilst lying on a bench doesn’t load your spine the same as a squat or deadlift does, the spine is static during bench and is not directly loaded with weight during spinal extension. So our spines are fine, thanks! Max effort benching requires using your body, not just arms and chest, to press the bar.

Our shoulders are one of the most mobile joints we have, this means that it is likely that we could injure our shoulders if we load them incorrectly with lack of stability. Arching your back allows us to pull and retract our shoulder blades and upper back muscles together, keeping the shoulder ball in the socket. Much more stability is achieved with a lower risk of injury. In short, the arch preserves our shoulder health and yes reduces range of motion.

The whole point of powerlifting is to lift the most weight possible for one rep. End of story.

So the conclusion? It seems a few of these elite athletes have noticed some form of trolling about their impressive arches. The opinion is split between two ideas, one being that some men feel uncomfortable around strong women and the other being the possibility that women are much more flexible and thus have a more obvious arch than their male counterparts. Another possibility is the lack of education surrounding the arch and powerlifting in general.

Does the sport need to grow more before the trolls calm down? Are we too sensitive to the trolls on social media? Do we only notice the negative comments? Only time will tell.