The snatch pull is a vital part of an Olympic weightlifter’s fundamental strength movements (in addition to squats and presses). By performing snatch pulls properly, all levels of weightlifters (and yes, even functional fitness athletes) can improve overall snatch performance, bar speed, and body positioning.

In this article, I will discuss how to properly do snatch pulls, how much load you should use, and what common mistakes you need to avoid. I challenge both weightlifters and fitness athletes alike to include snatch pulls into weekly training sessions to improve technique and pulling power, as simply performing snatches in WODs or in training only may not be enough to drive long-term improvements. 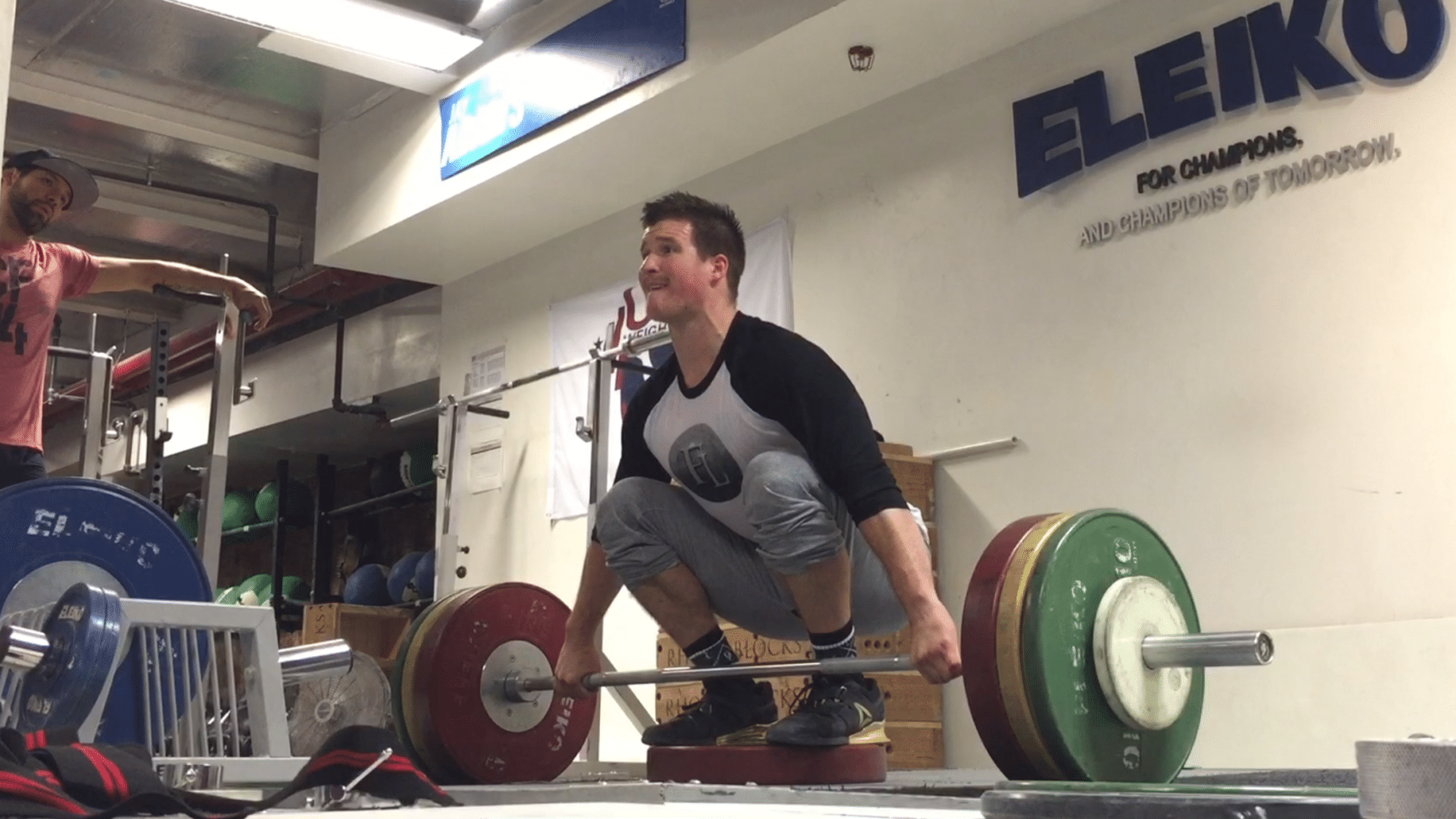 Me, performing some deficit snatch pulls and snatch deadlifts. By doing these from a deficit, you increase the demands on back and hip strength and positioning.

How to Do Snatch Pulls?

In the below video, Aleksey Torokhtiy demonstrates how to properly perform the snatch pull with Bulgarian Olympic weighlifter, Ihor Shymechko. In the video, Aleksey discusses proper grip width, foot placement, and what specific aspects of knee, torso, and shoulder positioning lifters should be aware of during the initial and last phases of the snatch pull.

Why Do Snatch Pulls?

The purpose of the snatch pull is to increase speed and height of the barbell to enhance a lifter’s power application during snatches. The ability to promote greater bar speeds and reach greater terminal heights of the barbell at the finish of the pull will enable a lifter to get fixated under a heavy load while maintaining rigidity and ensure good positioning in the receiving position. Additionally, snatch pulls can be used to help lifters learn proper bar mechanics and balance during certain aspects of the pull to better isolate issues and individualize solutions.

How Heavy Should You Do Snatch Pulls?

Because snatch pulls are often done for maximal speed and height of the barbell, and strength is not always the leading limiting factor (rather, alignment, balance, and technique), loads are often kept between 70-100% of a lifter’s best snatch, To be even more concise, coaches can watch lifters during the loading ranges to keep an eye out for technical breakdowns (see common mistakes below) and adjust accordingly.

It is important to note that loading for clean pulls is often greater in relation to snatch pulls, primarily because the clean is often limited by maximum pulling strength off the floor in addition to the barbell (in the clean) not reaching nearly as high of a terminal height as the snatch.

Below are five common mistakes made by beginners AND seasoned Olympic weightlifters, often seen at as a lifter fatigues and/or is at heavy loads (see last common mistake).

Some lifters may fail to stay focused during snatch pulls (due to fatigue, mentally drifting, etc) as snatch pulls are often done towards the last movements of a workout. When losing focus, snatch grip widths may be slightly off, in relation to normal snatch grip, creating small yet noticeable technical changes in the set up, bracing, and overall positioning of the torso and shoulder throughout the pull. Inconsistent technique practices can result in diminished carry over to the actual competition lift (snatch).

2. Hips/Pelvis Shooting Up in Snatch Pull

When initiating the pull in the snatch, many lifters fail to have the hip and shoulder rise together, often allowing the hip sand hamstring to take the brunt of the force at the onset of the pull.

Note how this lifter did a good job of staying tight in the pull, not allowing the hips to drive upwards without the shoulders rising at the same rate.

Soon, the lifter has to then reach rapid back extension to counter a poor take off, which can throw off all other aspects of the snatch pull. If a lifter cannot perform the snatch pull correctly, he/she may (1) not understand what is needed/asked or (2) he/she may be using too much load on the barbell.

Just like the hips rising too fast is a common fault, some lifters may have the tendency to pull the shoulders up and back faster than the hips rising, creating a similar (yet opposite) problem in the snatch. If a lifter has this tendency, he/she will often find the barbell has to go out and around the shins/knees in the pull, only to the either (1) pull them forward as the pass the knee, leading to not finishing one’s pull and/or early bends, or (2) missing the barbell out front in the lift since the lifter is slowing losing balance and getting pull forwards as the barbell pulls their mass forward. To fix, be sure to stay over the barbell with the shoulders, and focus on driving equally through the entire foot as you keep your arms long and shoulder over the barbell in the entirety of the pull (with the exception of the very, very end).

4. No Aggression at Top of Snatch Pull

Laziness, fatigue, or general unawareness are often the cause of lack of aggression at the finish of the pull. Failure to train the explosion phases of the snatch pull can minimize its powerful application to the full lift. To fix, be sure to stay aggressive at the finish, pulling the barbell up and into your pubic region.

Me : "On constitution day I will have the day off, all about celebration! " 🇳🇴🎉 Me on constitution day: I ate 3 pieces of cake 🍰🍰🍰🎉 Happy birthday Norway ❤️🇳🇴💙 #hipphurra#partyoverhere#constitutionday#happybirthday#norway#bunad#vs#løftesko#lett#snatchpull#highpull#tysværvektløfterklubb

Note how this lifter explosively finishes in the most upright and extended position with elbows high.

Be sure not to smack the barbell onto the pubis bone, as excessive contact with the barbell and the hips is not only incorrectly, but it will often lead to bruising and other technical issues.

5. Too Much Weight in the Snatch Pull

Chances are, if you still are expressing the above faults after countless hours of practice, it is most likely that the loads you are using are far to heavy. As discussed above, the goal of the snatch pull is not specifically strength based, but rather the application of power (velocity and force output) during the exact positions taken during snatches. If you find yourself struggling with the snatch pull, make sure you are staying within the 70-100% of snatch max range when performing this movement.

Below are some of my top articles and resources to help you not only jazz up your snatch (and clean) sessions to increase your Olympic weightlifting performance in both the gym and on the competitive platform.