Robert and Josie Portell are father-daughter CrossFit® athletes unlike many others. Robert has been an athlete and gym-goer for most of his life, but it wasn’t until recently he found CrossFit, which soon got Josie involved. Josie, like her dad, was an athlete who turned to CrossFit to immerse herself into another physically challenging activity.

Currently, Robert is helping Josie prep for the functional fitness competition Wodapalooza, which has its first online qualifying round in the second week of September 2017. Josie will be competing against other adaptive athletes in their growing adaptive divisions. 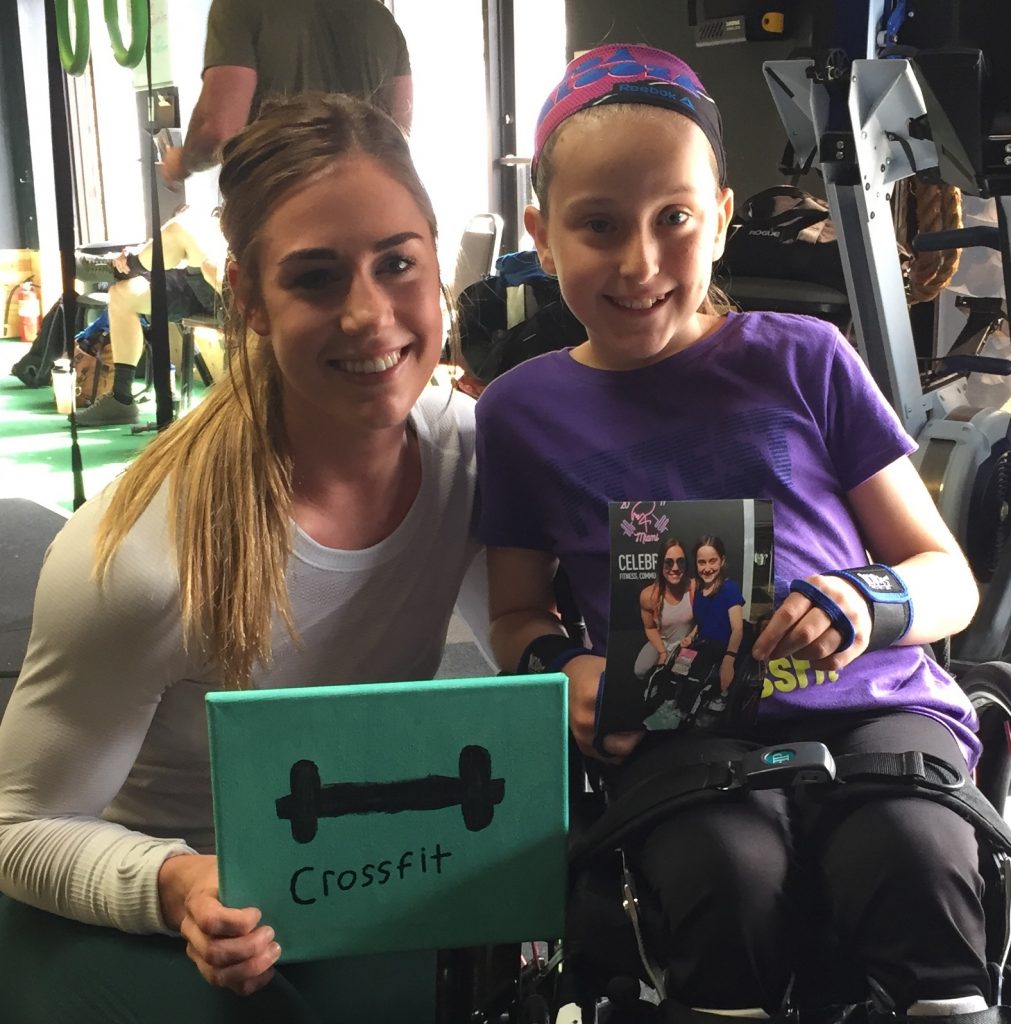 Josie was born with Spina Bifida, which is a birth defect that prevents proper development of the spinal cord. This defect has left Josie in a wheelchair since the age of two. But none of that has stopped her from achieving any of the athletic endeavors she’s set her mind to.

We caught up with this father daughter duo to learn a little more about their background in both older sports and functional fitness.

BarBend: How long have you and Josie been doing CrossFit?

Robert: I’ve been doing CrossFit for just under two years and Josie has been doing it for one year. I’ve done “Bodybuilding” since high school with cycling or running as cardio. I played men’s league baseball until I turned 40.

Josie does track and field and wheelchair wasketball in addition to CrossFit.

Josie finished up yesterday with first place finishes in her last two races, the 100 and 400. So proud of her performance this week. Unfortunately our van's performance was not so good. Stopped for lunch two hours from home and Josie's door would not close. ☹️But she got her first Tow Truck ride to get home. On to CrossFit training for 2018 Wodapalooza.

BarBend: How did you guys find CrossFit? And who introduced who to the sport?

Robert: I had followed “The Games” for many years before actually deciding to go to an affiliate and try it out. I guess you could say ESPN introduced me to CrossFit, but the owner of our affiliate, Trent, was the person who in reality introduced it to me. He also was open to Josie becoming part of the community, when she decided she wanted to try it.

BarBend: Rob, you’re a certified CrossFit Level 1 Trainer now, did Josie inspire this certification, or was it always on your agenda?

Robert: The inspiration for becoming a CrossFit Level 1 Trainer, was to start an Adaptive CrossFit and CrossFit Kids program at our affiliate. I had coached youth football, back before Josie, and currently help coach her track and field and wheelchair basketball teams. I have always loved working with kids, and since working with Josie, adaptive athletes also.

BarBend: You mentioned you and Josie are in prep for Wodapalooza, what does your weekly prep and training look like?

Robert: Josie’s regular CrossFit routine includes trying to get into our gym at least once a week, year round. Her Basketball season runs September to April. Track season runs April to July, so during those seasons, CrossFit enhances her performance in those sports.

Josie had a great time at the CrossFit Games Central Regionals this weekend. A big thanks to Josh @practicecrossfit for allowing Josie access to the athlete area. Thanks to all the athletes that took time to chat with her and sign her LapMAT @the_original_abmat . @richfroning @samdancing @scottpanchik @jessicargriffith @dan_bailey9 . She was so happy to see her idol make it to the games. @brookewellss she has left a spot dead center on her LapMAT for your signature.

In March, she participates in a local CrossFit Kids Competition at one of the local affiliates. The Wodapalooza Online Challenge Qualifier typically starts the second week of September. Once Josie competes at Track and Field Nationals, in mid-July, we put our focus on CrossFit and try and get to the affiliate as many times as possible before school starts in August.

Currently, we’ve been working on some movements that were in the workouts for Wodapalooza 2017, movements that Josie and I felt we could use some additional work on to do better at, such as the rope climb. We really put an increased focus on practicing proper technique and efficiency in the movements and transitions during this period. We’ll continue this push through the three weeks of Wodapalooza qualifying. The time frame from Labor Day to the first week in October is challenging because basketball starts too.

So proud of how far Josie has come from that Friday @thewodapalooza when @stephthehammer @kelschult and so many others were trying to figure out how to help Josie learn to climb the rope for a WOD that afternoon. @wheelwod @adaptivecrossfit @crossroadsaaa @crossfitballwin

Once we know she qualified for Wodapalooza, we then juggle both sports till Wodapalooza in January. My biggest concern during this period is we don’t have any major injuries from basketball that would effect Wodapalooza. The one thing that comes before all of this is that Josie has to maintain her performance in school.

BarBend: Rob and Josie, what’s your favorite exercise, and what’s your least favorite? Why?

Robert: I prefer WODs that have what I call “Grunt Work” like “Murph”. Ones that have running and lots of bodyweight movements, like air squats, sit ups, push ups, and pull ups, etc. I probably prefer them because I’m a better endurance athlete, and I really have to work hard on getting proper form for barbell movements correct. The barbell movements do not come naturally to me.

BarBend: Do you guys have a favorite partner workout?

Robert: As mentioned above, I prefer partner workouts that include “grunt work.”

Josie fine tuned her Muscle Snatch this weekend in the Snatch Clinic at our Affiliate. Thanks Coach Zach! @warriorelitesportsperformance @the_original_abmat Two final Track practices this week and then off to Madison WI for Track and Field Nationals the following week.

BarBend: Josie, do you have friends that do CrossFit? Who’s been your biggest motivation when improving in workouts?

Josie: Not that attend my gym. But I went to a CrossFit Kid’s Competition and met a friend. We’re currently trying to set up a date to do a workout together. My biggest motivation when improving in workouts is my favorite elite CrossFit athlete Brooke Wells. Brooke and I live pretty close to each other. So I enjoy getting to work out with her when we can.

BarBend: Josie, what’s your favorite part of the CrossFit community?

Josie: My favorite part of CrossFit is that I get to work out with non-adaptive athletes. In many sports, such as basketball, track and field, and softball, this is not possible. I like that CrossFit is inclusive for all athletes.

Josie already has found her favorite athlete! @thewodapalooza @brookewellss Thanks Brooke for taking the time to meet Josie.

BarBend: What are your current CrossFit and workout goals? What do you hope to accomplish by the end of the year?

Robert: The short term goals I have for myself is to get the CrossFit Kids and Adaptive CrossFit programs going at our affiliate. Over the next eight years, my goals are to continue to coach Josie, and hope to put her in the best position possible to get a track and field or wheelchair basketball college scholarship, if she continues to have that as a goal of hers.

After a hard defensive battle, with a final score of 16-10, Josie's Basketball team took second in the Conference Championship. Their performance this weekend almost seals a bid as one of 16 team headed to the National Championship Tournament. As their assistant coach the most rewarding part of the tournament was watching the kids pass the trophy around and getting their picture taken with it. Those moments are what it's all about. Josie is back to CrossFit this week. 17.1 tomorrow night. 17.2 Saturday. @wheelwod

My main goal is to give her all the positive character traits possible, to help her succeed in life, and athletic competition. Josie has also expressed interest in becoming a CrossFit trainer when she gets old enough, so I would like to help her achieve that also.

The real long term goals I have for myself are to transition from my current career to coaching full time. In eight years, if Josie is in college and working with a college coach, and I’m still capable, I would like to work towards trying to compete as a Master’s Athlete in CrossFit.

Robert and Josie are amazing examples of strength athletes who are working to further their sport. We plan to follow Josie through her Wodapalooza prep, and continue reporting on her progress towards competition.