Here Are the 2016 World’s Strongest Man Groups and Events

The Commerce World’s Strongest Man competition is taking place this month (August) from the 13th through the 20th in Botswana. And while there will be some big names missing, there’s still plenty of great strongman action to catch during the qualifying groups and finals. But don’t take our word for it…

A full list of participants, qualifying groups, and events for those groups is below. 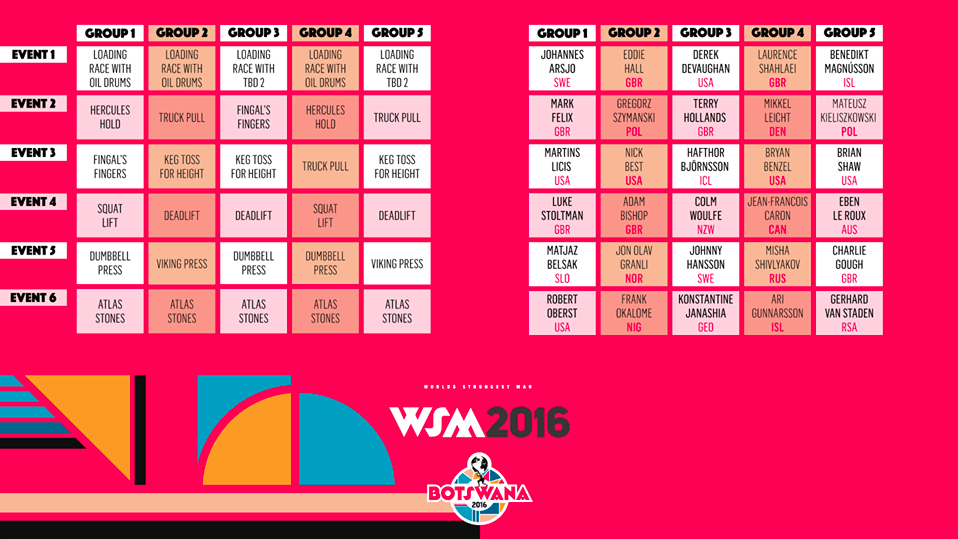 The list was released last week but updated earlier this week due to a late substitution. From the WSM Facebook page:

These thirty competitors are all hungry for the title, but with three prior championships under his belt — and offseason training that seems to be going particularly well, at least how it’s presented on social media — Shaw is entering as a pretty clear favorite to defend his title from 2015. (He also won in 2011 and 2013.) Interestingly enough, the podium for the past three years has included some combination of Savickas, Shaw, and Bjornsson — and no one else.

The television schedule for the event has yet to be announced, but we’ll update you as soon as we hear more.

Will Shaw emerge victorious once again? Is this Bjornsson’s year to finally stand as best after four consecutive podium finishes? Can a relative newcomer or crafty veteran make the top three? We’ll know by August 20th.