How to Become More Coachable (And Why You Probably Need It)

Mike Gill is a retired 105kg professional strongman and currently a broadcaster for Strongman Corporation. He has a background in all weight disciplines and has competed in Bodybuilding, Powerlifting and Weightlifting. He can be reached at @prostrongman on Twitter, Snapchat, and Instagram.

In 2005 I was making the transition from powerlifting and bodybuilding to becoming a serious Strongman. I was a very lean 285lbs with great all around strength and above average conditioning. There was a problem though; I struggled with the overhead. I could not break 285lbs no matter how I tired. After having 105kg pro Kevin Nowack out lift me on the bar in a training session with 300lbs I knew I had to do something. At this point I had owned multiple training facilities and had been coaching people for 15 years. It’s hard to find fault in your own game.

My passion for success was overwhelming. So much so that at this point I knew that I had to admit what I didn’t know in order to improve. I swallowed my pride and hired weightlifting coach John Schweikhard.

John has a passion for making people better in any of the weight disciplines. He has run local weightlifting and powerlifting clubs in Buffalo, NY for over 20 years, never really seeing much money from it. He is just one of those guys who has coaching in their DNA. After warming me up and watching me lift, he immediately wanted to scrap my push press and convert me to the Jerk. I was reticent to say the least. Jerking is wildly athletic. It takes place in a split second and requires absolute commitment to the movement. You breathe, dip, press and then the scary part, you throw yourself under the weight and catch it over your head. 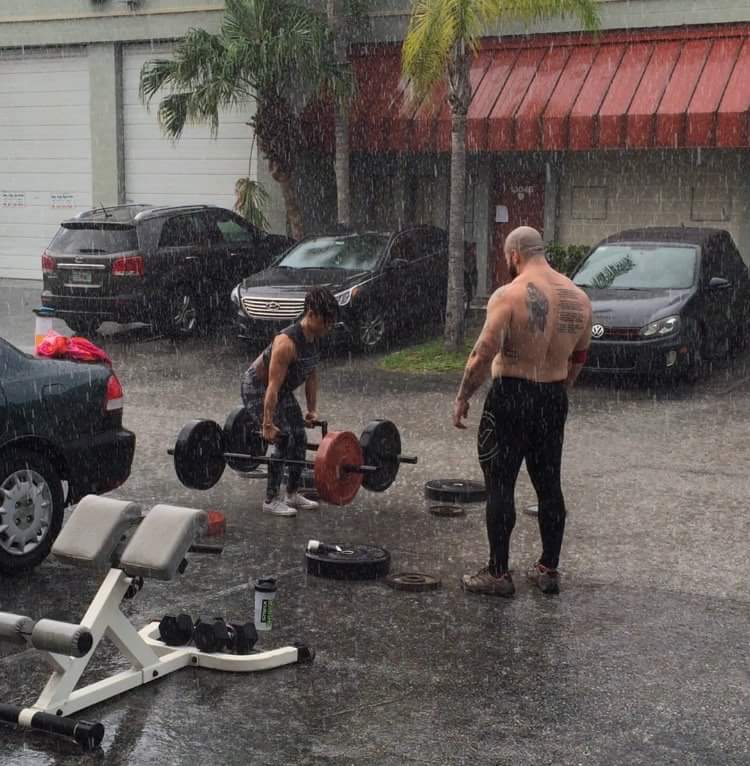 Honestly, I half assed my first session. I was overwhelmed and had been lifting slowly and under control since I started at 12 years old. This movement would require me to erase two decades of lifting.

“Couldn’t we just push press with better form?” I asked.

Silence. John continued with the Jerk.

After I miss a few more attempts I rephrased the question.

“Man, this hurts my knees, not sure I can do this.”

Sometimes volumes are spoken in just a sentence or two. This was one of those cases. John went to the wall and pointed to countless pictures of Russians, Bulgarians, and a few Americans deep in the Split Jerk.

“This is the most effective way to put weight over your head. There is no better way. Now if you want me to coach you, just listen.”

Quite literally my mind became instantly rewired to being coached instead of always coaching. It changed my thought process in an split-second.  It also changed my overhead. A week later, I easily hit 315. Three weeks after that 335. Six weeks after starting with John I confidently took 402 lbs and jerked it overhead. I could Jerk. I also realized I hadn’t gotten that much stronger in just a few weeks, but by listening, learning, and adapting I got better at releasing untapped potential I did not think I had.

I used this awakening to study the coaching process and learn more about effective ways of communication. In understanding different ways to be more effective at conveying what I saying, I learned how to get more from others that I needed to help me reach my goals. One of the first steps to being coached is seeing the different opportunities where you can learn.

Direct Coaching: This process involves you handing yourself over to someone that will oversee all or part of your athletic process. Programmers, nutritionists, and hands on coaches are your direct teachers. You might have one or more of these people working with you depending on your level and cash available. These are the people that deserve your full attention. You are paying them for their advice and they stake a reputation on your success. Here is how you can maximize your time with them:

Training Partner Coaching: Most of us train with one or two people as often as possible. It provides the push necessary to get better each week and helps provide a safer and hopefully more focused training environment. Often you will get a ton of causal feedback from your partners.

You have to weigh some of this advice depending on the situation. They may be on a slightly different program than you are or seeing a different coach. They may advise you to do something that conflicts with the protocols you are set to follow. If this is the case, explain to them that you are under strict guidelines to perform a certain way. If the advice is complementary such as “Hey, I know you are supposed to be working on squat technique and you are pushing forward over your toes”, this should be taken as positive feedback to help you work the corrective process.

It’s also important to stick to the game plan. Your partner is most likely not doing the exact same weights as you. Do not let laziness stop you from changing the weight or suddenly going for a PR single because they are. Work your plan.

You should also have a loose working knowledge of each other’s program and strategies to help the other person. In your mind you are always giving helpful advice, just double check that it matches their goals before “helping out”.

Criticism coaching: There are really two categories here, but one is much more valuable than the other. One is typically contest feedback from the judges or other coaches. The other is from (and don’t sigh) the Internet.

In a contest, if someone in charge is trying to help you, for the love of Pete, please listen. I can’t tell you the amount of times a judge or well respected coach is telling an athlete to do something simple like tip the keg or push their head through the press, and they are just ignored. I know your adrenaline is going here but this can have an immediate effect on the outcome of your event.

If they are kind enough to explain to you what was wrong with your performance after the event, listen and ask questions. Typically they do this because you have more potential than you exhibited and there is a simple fix. If you can, go over the suggestion with your coach when you are able and see if they agree. Sometimes you may be doing something under the pressure of a contest that you don’t do in training, and this is the best way to see that, short of video.

The second, and often much less effective type of coaching is social media feedback. This is not to say it is without merit, you just really have to learn what is good and what is junk. Every time you post a set, PR, workout, etc. you are opening the door to feedback, be it good or bad. Some people will never say anything positive, some never anything negative and there are a few that are trying to help. Remember your friends often want to build you up so they may have a different perspective. If you post a squat, for example, and all your crew says great job, one guy says light weight, and few people say check your depth, you may want to check your depth and not get defensive about it. This is especially true if you are doing everything without supervision. You don’t have to pay attention to any of it, but you did post it for a reason.

Being more coachable will transfer over into all aspects of your life. If you can learn to listen and handle feedback in any form, you will likely become a more effective person. Someone truly open will learn something new every day. Process it, remember it, and apply it for great results.

Malheiros, Toomey-Orr Sprint to Victory in Event Three of the 2021 CrossFit Games