One of the biggest names in fitness on staying fit outside of the gym.

Written by Nick English
This article is presented in paid partnership with BSN, a global leader in the sports nutrition marketplace.

Scott Herman is a legendary BSN-sponsored athlete with over 2 million YouTube subscribers and half a million Facebook fans. As one of the most influential trainers online, if you’ve searched for an exercise guide for anything from bicep curls to leg extensions, there’s a pretty good chance you’ve seen one of Scott’s videos. He’s also managed gyms, he won a Men’s Health competition for “Best Abs on the East Coast,” he’s modeled, he’s a reservoir of valuable knowledge for anyone looking to get healthier.

As one of the O.G. fitness influencers, we wanted to ask Scott five pressing questions about how he’s maintaining his shape outside of the gym — after all, many of us are without access to the fitness facilities.

How many meals should I eat throughout the day?

So what I do is set timers on my phone so what I do is I get up I get food I get water and I get my butt out of the chair moving around and keep the blood flowing. So for me having multiple meals throughout the day gets me moving nadk eeps me focused byt if you like to have one meal a day you can do that too. Some of these crazy guys can do 4,000 calories in one meal and still function after. Me, personally, I just fall asleep I’d just be overloaded with food and go into a food coma but if you can do that that’s great just see what works for you and stick with it.

BarBend: Research suggests that in fact, one giant meal per day is about as effective at eating ten meals a day — it’s really your total calories that matter for your weight and body composition, not how frequently you eat.

While your performance in the gym will probably be a bit better if you’ve eaten some carbs and protein in the preceding hour or two, weight gain and weight loss is made with your total calories. In fact, one study found that so long as their calories were the same, participants gained and lost the same amount of muscle and fat whether they were eating every day or if they were eating every other day.(1)

Now, if you’re an elite bodybuilder, it probably pays to eat regularly throughout the day to keep muscle protein synthesis as high as possible. But for the average person and even the average gymgoer who wants to deadlift 500 pounds, you can eat based on when you prefer to eat.

Just be mindful of your calories. 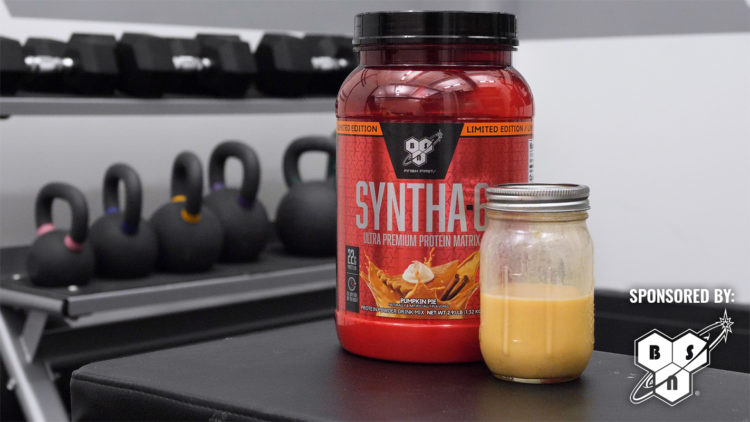 What supplements are essential for intermediate gym goers?

Scott Herman: It doesn’t matter what level you are when it comes to supplements, whether you’re going to the gym or working out in general, because when you think about what supplements are there for, they’re there to supplement things that are already in place.

Maybe your meal plan is short 20 grams of protein from all the food that you’re eating and you just can’t figure out a way to get more protein in your diet. Then you can get a quick protein supplement to fill that gap in.

My protein stack consists of:

The protein is for the reasons I mentioned: just to get extra protein in my diet.

N.O.-Xplode is pre workout energy on days where I feel like I don’t have the energy to train super hard or stay focused. I have a scoop of N.O.-Xplode for that.

And then creatine is a supplement you take daily which helps you have sustained energy throughout your entire workout.

And that’s it: three staple supplements to help me with my gains. 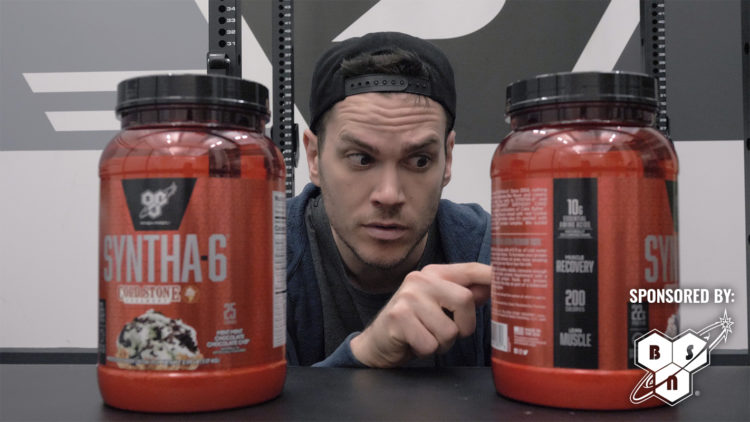 BarBend: Whey, creatine, and pre workouts those are pretty much the three most popular supplements for athletes, and there are plenty of reasons why.

As Scott said, whey is just protein, and it’s great for helping you reach the typical goal of 0.7 to 1 gram of protein per pound of bodyweight every day.(2)

Creatine, in addition to Scott’s note that it helps to sustain energy, also has strong links with increased power output and then there’s the benefit most people like: it makes your muscles bigger by drawing more water into them.(3)(4)

Note that Scott said he takes pre workout on days he doesn’t feel like he has enough energy. That’s an important note: if you take them every time you touch a weight, you might not be as sensitive to the effects.(5) So it’s smart to be mindful of how you’re feeling. If you’ve had a ton of sleep and a ton of carbs and you feel great, you probably don’t need to supercharge your nervous system with a bunch of caffeine. That said, pre workouts can be terrific supplements when you need something extra in your tank.

How do I maintain my strength gains if I’m away from the gym for an extended period of time?

Scott Herman: Unfortunately, if you can’t lift heavy weight or lift as heavy as you’re used to, your strength is going to go down a little bit.

But that’s not a bad thing! You can treat this as a nice recovery period and give your central nervous system time to recover from tall the intense lifting you’ve ben doing since before you were stuck at home. And believe it or not, when you go back to the gym, you might feel a little weak, but after a week or two of lifting heavy and getting back in the groove you’re probably going to feel a lot stronger.

Now, depending on how strong you are or how heavy you were lifting, there might be some things you can do at home to try to offset how much strength you might lose from not being able to do your traditional workout. I mean, guys, getting a bucket and filling it with cement, or getting a backpack and filling it with rocks, goes a long way when you’re doing push-ups, pull-ups, and squatting, right?

So if you can get creative, you can save a lot of those strength gains. But if you can’t, you don’t have any of these things available, don’t get upset. Just stay focused, do whatever you can do at home to keep your workouts going, and then when you get back to the gym you’re going to feel better after a week or two. I promise.

BarBend: How long it takes to move a lot of weight again depends on how strong you were and how long you’ve been away from the gym.

But Scott has great points here: bodyweight training can go a long way to minimizing strength loss. It’s worth remembering that it’s pretty tough to train your posterior chain without any equipment, so it’s useful to MacGyver equipment out of broomsticks and buckets and/or row with a loaded backpack or your bodyweight for an inverted row. (Tying a knot in the middle of a towel and closing the door with the knot on the other side of the top of the door can make for a great way to do bodyweight rows as well.)

You’ll lose absolute strength without hitting the exact same weights as you did when you had a gym, but keeping your muscles active, mixing in plyometric work, and maintaining a lot of blood flow to your muscles will vastly improve the time it takes to get back to your previous levels in the gym. (And you’ll look a lot better.) 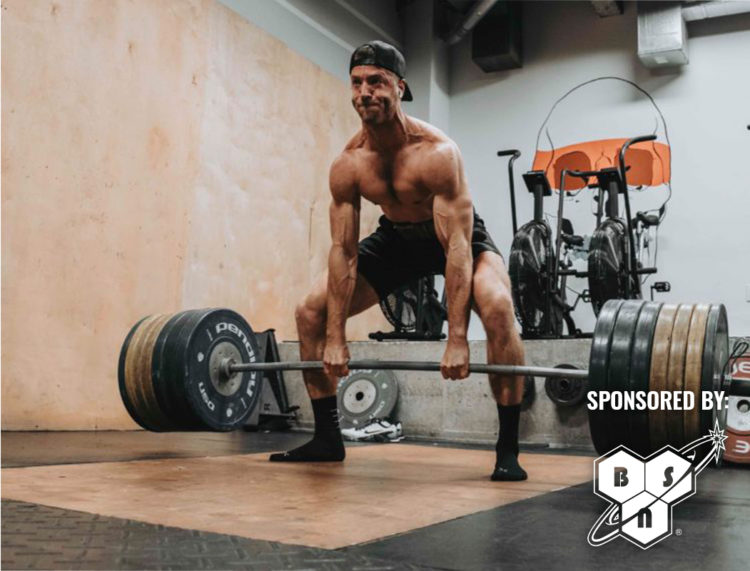 Should I do cardio if I’m bulking?

So here’s a really easy way to make sure you’re getting enough of all these things.

Let’s say your maintenance calories are 2,000. And then let’s say you’re eating a 2,700-calorie diet.  That gap is now 700 calories over your maintenance level. And you’re like, dang, I’m probably gong to put on a bit more body fat doing this, but I need to eat that amount of food to get all my vitamins, minerals, and macros in.

Well, if you go do some cardio and you burn 300 or 400 calories, it now takes that surplus from 700 down to 300 or 400. So I’ll use cardio to offset my surplus from my meal plan when bulking. So if you do it smart, you can do cardio any time, whether you’re bulking or cutting. You’ve just got to do it smart.

BarBend: Not only will cardio help you to burn some extra calories, but improving cardiovascular and cardio respiratory capacity is a smart move even for hardgainers. Even steady state cardio, like jogging, can be great because it’s less taxing on your central nervous system — so it won’t mess with your recovery the same way really intense cardio can — plus you’ll recover better between heavy sets if you’ve boosted your heart and lung function with cardio work.

Plus you’ll probably live longer, if that’s a big deal to you.

What are you listening to in the gym?

Scott Herman: What I have playing the most in the gym is ’90s. Korn, Limp Bizkit, Papa Roach, Staind, bands like that. I’ll have Nirvana on, we’ll play some Metallica, Alice in Chains, AC/DC. I mean I’ve had the same iPod playlist since I was in college. I haven’t. changed it.

Those were our five big questions we had for Scott Herman — we think they’re definitely going to help us get through this year, and feel a little better about the fact that we haven’t changed our workout playlists in ten years either.